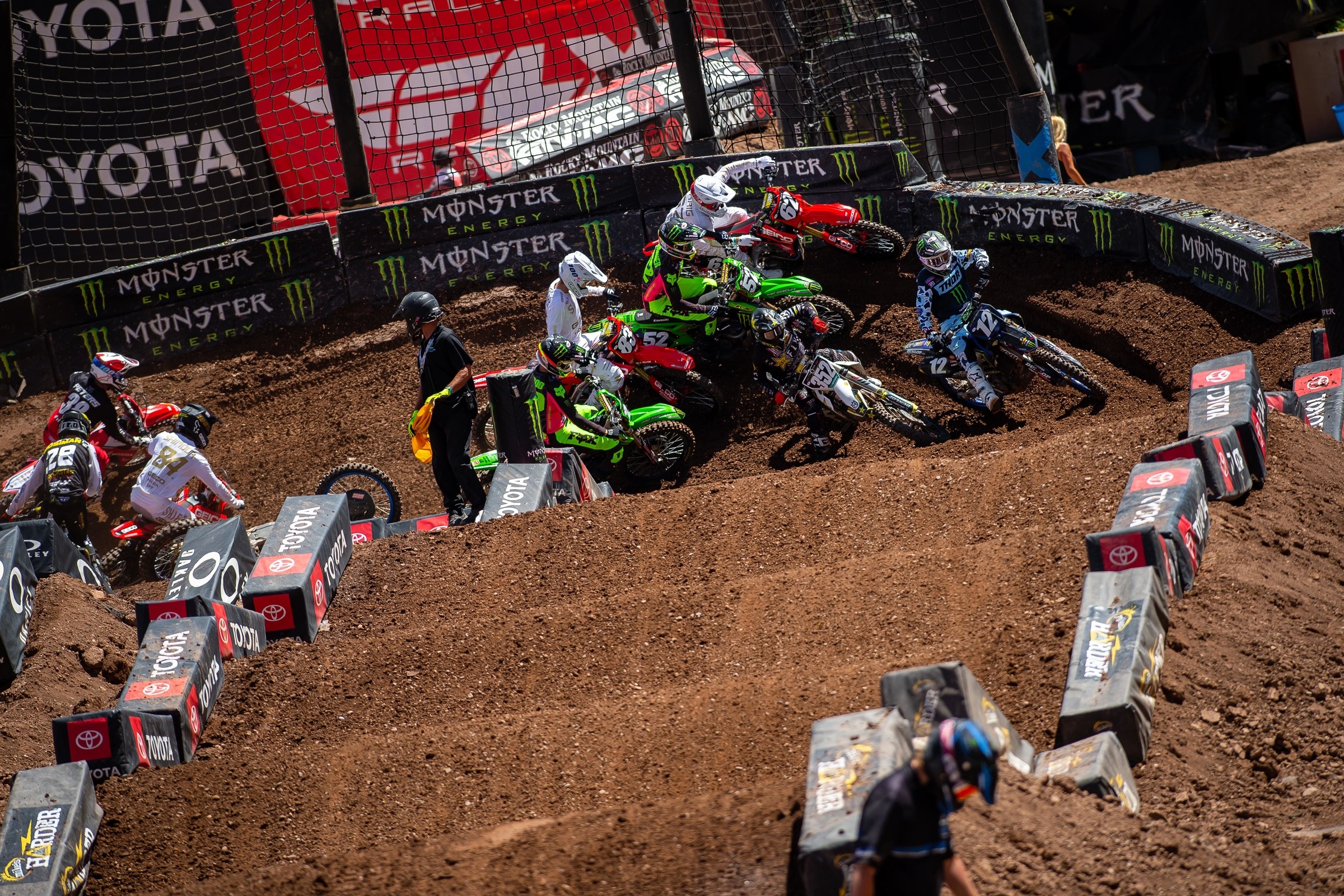 The final round of the 2020 Monster Energy AMA Supercross Championship is done and dusted, and three champions have been crowned. As we put the seven in Salt Lake City behind us, we fired more questions the way of long-time pro Jason Thomas to see what he made of all the on-track action at the finale.

Jason Anderson and Zach Osborne both had strengths and weaknesses on the track. The race swung based on parts falling off of each bike, but how did you see the battle shaping up, section by section, before that happened?

It felt like they were both being very patient and waiting until the end to sort it out. They didn’t have any pressure from behind, gapping Deano and their other main rivals having difficult main events. They knew that this would come down to just the two of them and being teammates, I think they were content to let that play out. The track was really tricky so they couldn’t override the track, either. They had a good pace and were pulling away from the pack. With a few laps to go, they would have picked up the intensity and let the best man win. Unfortunately for Anderson, his mechanical issue was more impactful than Zacho’s.

We heard Zacho was "laying the wood" as soon as he got on a 450 late in 2018. It took this long to finally put it all together. What takes so long for rookies to learn? (Look at AC right now for the latest example).

It’s a mix of physical and mental growth/improvement. The list of 250 champions in the 450 class is simply staggering. That’s a lot of winners all being relegated to losing on a weekly basis. Being able to rise above the average in a field of 250 champs is not an easy ask. It takes time to mature physically, as well as mentally cope with racing against riders that you may have considered to be on a different level than you.

More than anything else, though, putting together months and months (even better if its years) of consistent training and riding without a big injury is often overlooked. Without a big setback, riders can continuously improve their fitness base, speed, and confidence. That ball of momentum picks up steam and is very hard to compete against. Zacho has had a plethora of injuries since that 2018 timeframe, forced to then heal, and virtually start over. Riders like Ryan Dungey and Ryan Villopoto had injury free multi-year runs, getting stronger and faster the whole time. Eli Tomac is in that cycle right now. He has won three consecutive 450 Class Lucas Oil AMA Pro Motocross Championship titles and now has a Monster Energy AMA Supercross 450SX title to add to the mantle. All the while, his base of fitness and confidence level continues to grow.

Thoughts on this final SLC racetrack?

The track was cool, but the dirt really got away from Dirt Wurx. It dried out, the base hardened, and lost all traction. I don’t envy the task of managing dirt in late June, but this was one of the worst of the SLC 7. It wasn’t as windy as the first round, but the dirt reminded me of it.

As far as the layout itself, the only real negative I will mention is the number of 90-degree turns. Those 90s really hamper the racing and disallow passing. Every track has pros and cons but 90s are never going to be high on my wish list.

What did you think of the overall SLC plan?

Given the challenges, I think it worked! Listen, this was not Anaheim 1. This was not the Vegas finale. Grading these events against those is not fair. The absence of fans, the pit party, opening ceremonies and nighttime racing all weighed heavily on the look and feel of these races. We knew that going in, though. Being one of the only sports in action right now was a huge coup and came at a huge cost to Feld Entertainment. Everyone involved in making this plan reality deserves a huge round of applause. I hope we never have to go down that path again but for the good of the sport, we went racing. While other sports are scrambling to make a plan, bickering amongst themselves, and genuinely wondering if they can even have a season, we went racing.

This changes everything. The lack of a 450SX title was a massive asterisk on his legacy. As great as he’s been, it would have always hung over his head if he didn’t get this done. The 2017 meltdown is almost a nonstarter now. Regardless of where it goes from here, he got that all-important title. As exciting as it surely was, I would bet he felt relief as the primary emotion. This was a LONG time coming.

Sexton/Nichols in the heat race. Who is at fault?

They probably both carry a bit of blame, but I absolutely hate Sexton’s decision there. He had nearly zero to gain and nearly everything to lose. It’s just the heat race. Who cares! That decision to triple to the inside carries so much risk as Nichols natural line is going to be to veer right at some point. With the title on the line, Sexton’s decision is just so ill-advised. Best case, he makes a fairly inconsequential pass. Worst case, he ends up injured and gives away a title. One could argue that Nichols should have gone to the berm, but I can promise you that he didn’t expect Sexton to triple to the inside there. Tripling to the inside in that particular section disallowed tripling after, making it a sideways move at best. Sexton will learn as he gains experience, but he was lucky to escape there. Nichols was not as lucky.

Any sort of asterisk for Shane McElrath with those two red flags that cost him leads at the SLC races?

No, sir. McElrath had every opportunity to win this title and was simply not fast enough. Chase Sexton passed him multiple times en route to this title. McElrath couldn’t keep Sexton’s pace and it was really that simple. The red flags were definitely a bit of bad luck but to win a title, you have to prove to be the best when it counts. There is almost always a moment when the winner proves his merit. Sexton did that down the stretch and Shane couldn’t counter.

Can you talk about the overall craziness of the 250 class?

The 250 class is always going to be this way. We are watching kids grow up in front of our eyes. Most of the competitors are 20 years old or younger. Sexton, a two-time champ, is only 20 years old. They don’t have the maturity level to see the long play just yet. They will grow into that and be smarter for it. The current crop of craziness provided by Jett Lawrence, Cameron Mcadoo, Michael Mosiman, Jo Shimoda, Austin Forkner, and Jalek Swoll replaced the now-450 crew of Wilson, Osborne, Savatgy, Plessinger, Cianciarulo, Webb, etc. The 2017 Las Vegas finale was pure, unadulterated chaos, with Osborne winning the title in the last corner after Jordon Smith crashed out of an easy path. Then 2019 saw Adam Cianciarulo throw a title away in the worst way, crashing while on his way to glory. The 250 class is full of young, exuberant, immature talent. It’s always going to be volatile. Sexton, Forkner, Ferrandis and Cooper all went down during the show.

The title pressure was evident throughout the afternoon’s racing. These guys usually ride like Top Gun’s Iceman, no mistakes. Sunday saw them all over the map, flying off the track and putting themselves in harm’s way. Pressure makes people do erratic things and make poor decisions. That was on full display Sunday.

Actually, talk about that some more because this is worth two questions and two answers. Don't forget about McAdoo, the Lawrence brothers, Mosiman, heck, pretty much everyone!

Everyone was in full send mode and doing so on a very tricky racetrack. The 250 riders always push the aggression level to the max. Sunday’s track didn’t reward aggression. Further, they all had teammates vying for titles. Jett got uber aggressive with McElrath, opening the door for Sexton. McAdoo went after Ferrandis in an attempt to help Forkner. Then for reasons I still don’t quite understand, Justin Cooper ended Cameron Mcadoo on the last lap in a battle for sixth. Whether it was the titles, the showdown, or just the last chance to prove themselves, the 250 class was out for blood.

What happened to Webb and Roczen?

The start claimed Webb, plain and simple. He went down in the first turn pile-up, along with Martin Davalos, Justin Barcia, Justin Brayton, and others. His main event was over really before it got going.

For Roczen, he had a real chance to win this but fell down trying to pass. The track conditions favored Roczen’s steady throttle hand. With Tomac cruising and Webb on the ground, Roczen missed a nice opportunity. Mistakes happen but if Kenny could have gone with Osborne and Anderson, he may have been able to capitalize on their mechanical issues.

Can you summon up the strength to talk fantasy?

I can’t. I am in mourning over the performances of Blake Baggett and Benny Bloss. It came down to my picks of Baggett and Bloss versus many teams’ choice of Broc Tickle and Justin Hill. It was a matter of timing with Tickle as I had him last week and my rivals’ teams had the Baggett/Bloss combo last week. When Bloss hit the mat and Baggett couldn’t get it going, I was hit with a double whammy of Tickle and Hill putting in their best rides of the SLC series. It was a devastating turn of events that I will need every second of this break to recover from.