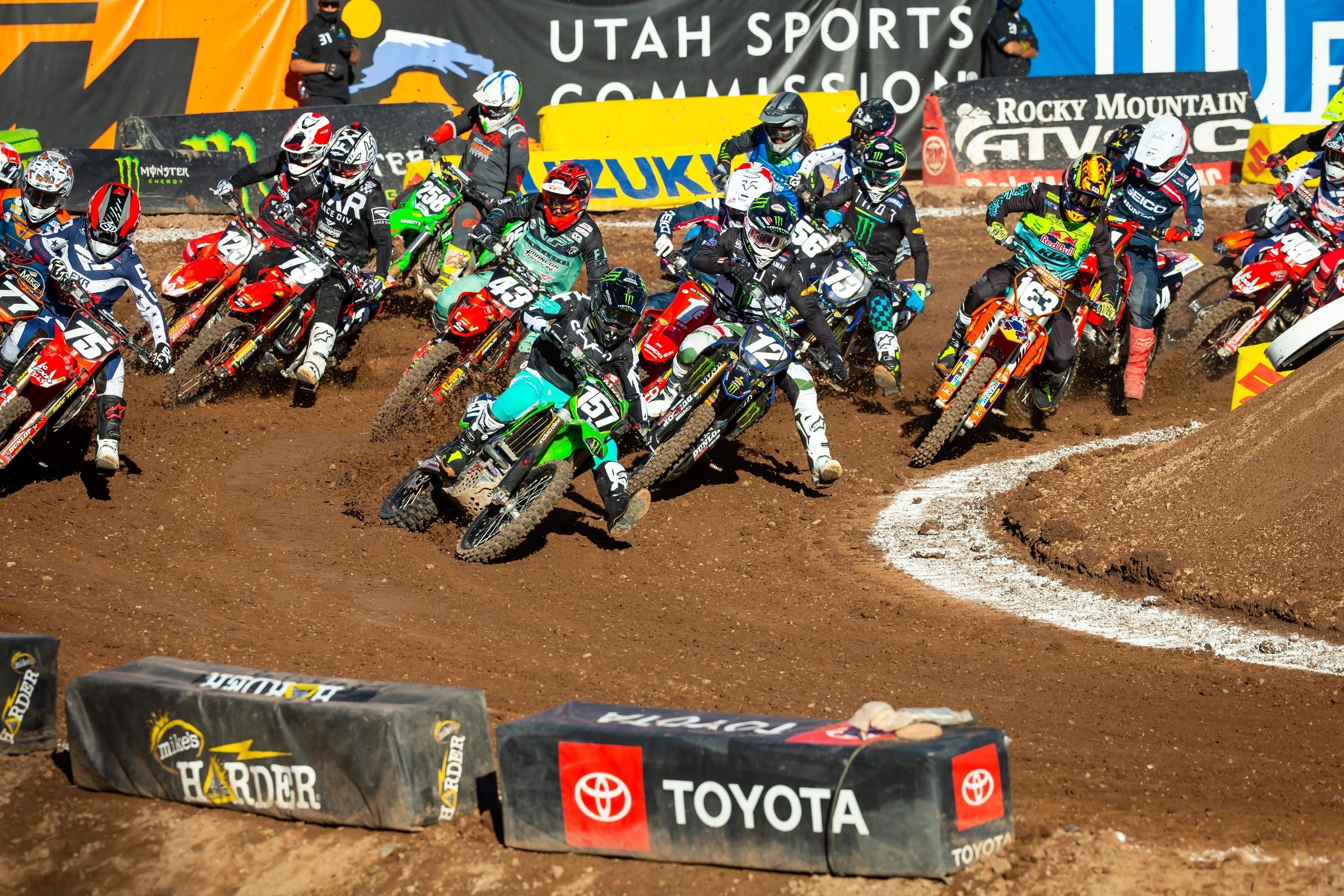 The penultimate round of the 2020 Monster Energy AMA Supercross Championship provided us with some major talking points heading into Sunday’s finale. With round 16 in the rear-view mirror, we fired some questions off to former pro Jason Thomas to get his insight on Wednesday night’s action.

Chase Sexton's riding style gets a lot of compliments. He sure looked good on Wednesday. Can you describe in words some of the things you see?

His fundamentals are very sound. He is tall which helps him leverage himself over the front when needing front tire grip and also lean back further when looking for rear end drive. He is also very intuitive, anticipating how his motorcycle will respond to obstacles. He stands a lot for a taller rider, also, which allows the motorcycle to work freely underneath him. These traits don’t magically appear. They are the result of hard work and purposeful avoidance of bad habits.

Surprised Sexton was able to make it happen like that?

I wasn’t surprised at Sexton’s tenacity or pace. I was surprised with Shane McElrath’s inability to react, though. We have not often seen Sexton overwhelm the field with raw speed. Further, he was able to make an aggressive pass and still pull away from McElrath. I really expected McElrath to watch Sexton’s lines, regroup, and find the pace. It speaks volumes for Sexton to be able to distance himself in that scenario.

Seriously what has happened to Eli Tomac's starts?

Well, let’s be reasonable. He literally had the holeshot on Sunday before the Cooper Webb run-in. I just see inconsistency more than some major deficiency. He has been at the front in several of these starts but he’s also been at the very back, also. His decision to move to the inside gate picks is the catalyst for the inconsistency. He is choosing to reduce risk of a catastrophic first turn crash but in return, is dealing with the boom-or-bust variance that comes with the far inside gates. I wouldn’t expect a different situation this Sunday.

Did you think Eli was going to get it done when he got to the front pack so early?

I did! I believe that had not been Webb at the front, he would have finished the job, too. Webb is just too strong mentally and physically to fall prey to the Tomac charge. Not to say Tomac can’t beat him, obviously, but it’s just not a foregone conclusion like we have seen at times. Webb has an ability to raise his level mid-race and also has enough poise and mental fortitude to withstand the momentum. It’s pretty awesome to watch.

He just needs another 1 percent. There’s not really a missing piece, it’s just a little more of what he already has. The biggest factor there is injury. That last 1 percent takes a lot of time to attain and Zach has battled injuries. If he can stay healthy throughout the summer and come into A1 fully prepared, I would expect that final 1 percent to be in the arsenal.

Talk about Webb in the whoops/triple/left hander. (Slow at first, faster later)

This is a perfect example of Webb making mid-race adjustments. It is so incredibly difficult to assess line selection during a main event whilst battling the likes of Ken Roczen, Osborne, Tomac, etc. Webb’s ability to stay aware of developing lines as well as maintaining vigilance in his own strengths and weaknesses is not common. Chad Reed was very good at this in his prime. Seeing a rhythm section become viable, a new line form, or a more efficient approach is something done in between qualifiers for most. For these select few, they are seeing, processing, and applying at speed. Incredible.

Was the track as similar to Sunday as it looked?

It was, yes, but it shaped up a bit differently than Sunday’s. The subtle changes created new lines, rhythms, and wrinkles. The rhythm after the start was pivotal. The 2-3-3 line that a few picked up was a big reason why Roczen lost the lead pack. The corner after the whoops was also much different because of the triple after. Tomac chose to take the outside in hopes of carrying momentum while Webb opted for the tight inside. Webb’s line really made the difference late in the race. Tomac’s line began to deteriorate, making it tougher to carry the needed momentum to offset the longer distance.

Wednesday marked the last singular regional 250 event. Sunday’s East/West Showdown finale will be a much different dynamic than what we saw last night. The 250 East has been plagued by injury, opening the door to big points for many privateers. Riders like Darien Sanayei, Curren Thurman, Jerry Robin, Justin Rodbell, Luke Neese, Chase Marquier, Lorenzo Locurcio, and Coty Schock all came through for their team owners. It was a smorgasbord of value compared to a stacked West Coast field. It will be an interesting dynamic between East and West in both the LCQ and main event. I expect a heavy West Coast presence in the top 12 riders in the main.

For the 450s, it was more gambling on the last few main event spots. Riders like Fredrik Noren and Alex Ray snuck into the main event while Adam Enticknap, Carlen Gardner, and Ryan Breece were left out. It’s been a revolving door of these privateer riders each week. Picking who qualifies and who doesn’t from that group of 4-6 riders will make or break your team.

A few of the value picks this week came in the form of Martin Davalos, Justin BraytonBlake Baggett, and Benny Bloss. They didn’t pay huge points, but they finished inside their double point threshold and were nice additions. Look for more of the same Sunday. A well balanced mix of mid-pack value, a riskier privateer, and a well placed all-star.