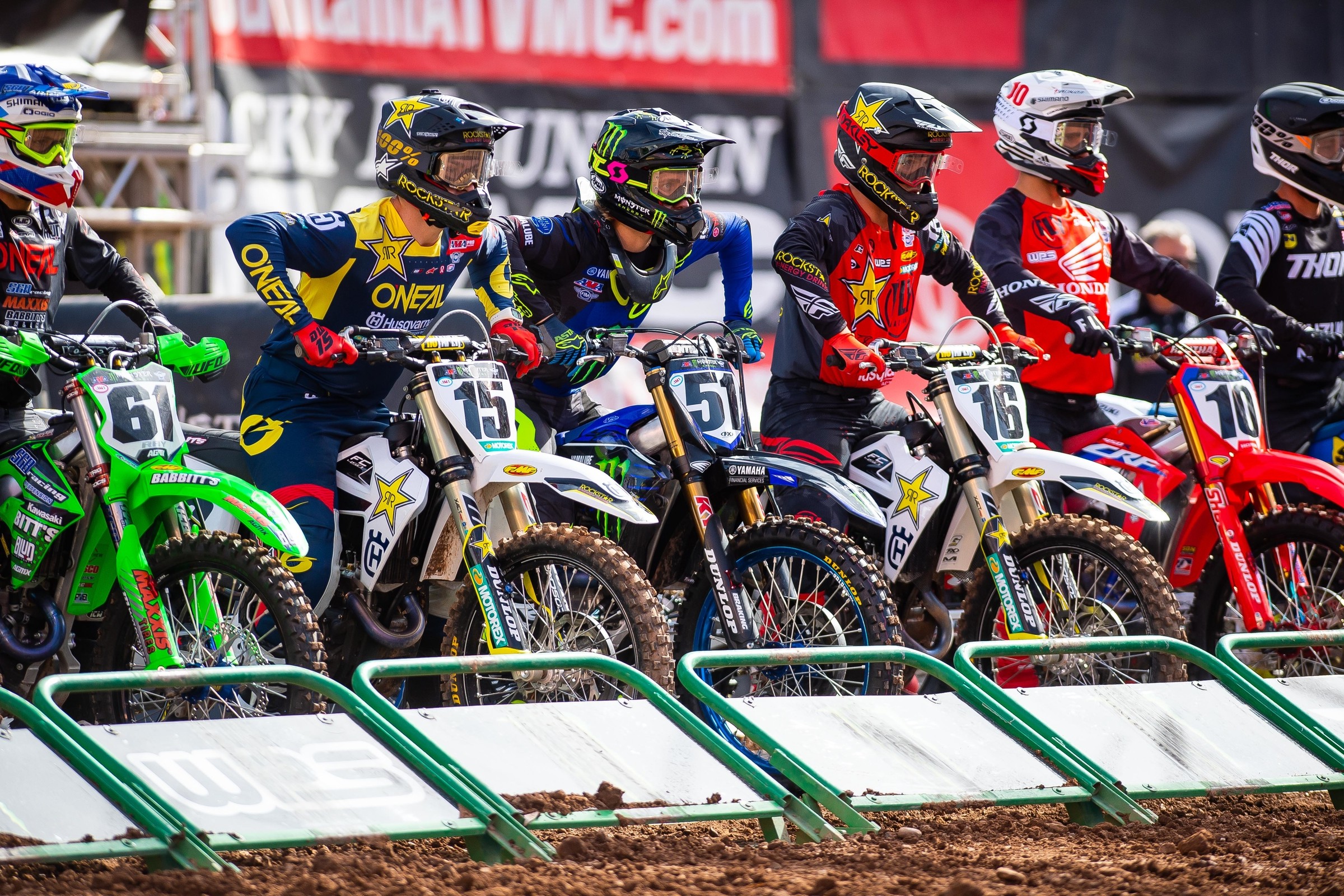 Two. More. Rounds. Wednesday’s round 16 marks the penultimate round to this wild and historic 2020 Monster Energy AMA Supercross Championship. Regardless of personal opinion, this seven round SX blitz will be forever remembered for many reasons. One of the more difficult aspects has been the lightning speed turnaround for track design. This 16th round will see one of the most similar layouts to the prior round. There are certainly a few significant changes but you’ll notice the resemblance in many sections.

The starting gates are in the same location, with the first turn looping through the same lane as Sunday. In fact, the first three lanes are almost identical to Sunday’s event. Riders will sort out the lanes quickly, already knowing the optimal rhythm. That will take some of the analysis off the table and also emphasizing the start more than ever. Watch for a 2-3-3 in the first rhythm after the start, followed by a 2-3-3-onto tabletop and off into the next corner. After making another left, the same whoops section remains and the four single jumps entering the fast sweeper left. The track map looks as if maybe the fourth jump could be smaller this week and anytime that happens, we are on quad watch. Riders like Mookie, Roczen, Tomac, Brayton, and Baggett (the whoop blitz masters) could all pull the trigger if they exit the whoops at speed.

After the sweeper, riders will hit the only supercross triple and then enter a few small blitzing whoops. Riders will be battling momentum here as the triple will want to float them to the right side of the track but the ideal entry point for the following turn is back to the left. Watch for riders to “turn down” over the triple with their front wheel pointed back to the left, hoping to veer back that way as much as possible. Lesser skilled riders will float right, enter the blitz whoops on the right, and hinder their corner speed before the finish line. Supercross is very much about geometry. The more obtuse the corner entry angle, the more speed one can carry. This specific section is a perfect example of it. The only exception here will be on the final lap as riders will close down their angle to protect against a block pass (or any lap with a foe on your rear fender).

The finish line jump is next with a small, low-speed step up into a 180-degree left. This left will be a flat corner and is also followed by the start straight. That combo is significant because speed down the start straight will hinge on that corner’s execution. Spin the rear tire on exit and getting passed halfway down the start straight could be possible. This corner will require patience, much like the final corner of round 15.

Round 15 was a volatile one. The 250 West Coast crew really added spice to the picks, giving multiple options and huge swings. With the 250 East back in action, what should we expect? Remember, this 250 East group is a thin herd. Between those refusing the trek to Utah, injuries, and those choosing to prepare for the Lucas Oil AMA Pro Motocross Championship, this series is a shell of its former self. With less elite talent at the top, the middling privateers become critical to fantasy scores. Who will qualify, who can go the distance, and who will crack under the LCQ chaos… those are the variables. Riders like Justin Starling, Coty Schock, Wilson Fleming, Nick Gaines, Carter Halpain, Lorenzo Locurcio, Chase Marquier, Kevin Moranz, Josh Osby, Jace Owen, Darien Sanayei, John Short, and Dustin Winter are just a few of the names to watch. Some of those will surprise while others will disappoint. That’s just the nature of it and where both the triumph and heartbreak lurk. There is simply no way to predict who will have a good night and who won’t. Luck is such an undeniable factor in this game, especially in this 250 East. Close your eyes and throw darts at a board, that’s as good a strategy as any.

In the 450s, there is a bit more strategy. We have much more predictability in the data. Riders like Blake Baggett, Benny Bloss, Chad Reed, Tyler Bowers, Kyle Chisholm, etc. have all raced five times in succession, giving us enough info to draw conclusions.

A riskier choice might be Martin Davalos who burned several teams on Sunday. He had been rock solid before his big crash, more so than ever in his career. Look for a bit of a bounce back tomorrow. The only thing that can hold Martin back is a crash and while that may have been almost a certainty at times in his 250 days, he really has found a calmer stability as of late. Well, until Sunday. Which Marty do we get this time?

I believe the emotional agony lives with the outliers. Take Fredrik Noren, Adam Enticknap, Alex Ray, and Carlen Gardner. These four represent a huge flashpoint for fantasy teams. A couple of these riders will qualify but I can almost guarantee not all four will. So, who to pick? Good luck and Godspeed to all of you determining which horse to put your money on. Several years of my life have been sacrificed due to the excruciating pain this weekly choice causes. Similarly to the Grail Knight instructing Indiana Jones to choose wisely, choosing which rider for your fantasy team can determine your destiny. (Dramatic? Maybe, but not if you saw my turmoil over fantasy results).

With abundant sun baking the SLC adobe on Monday and Tuesday, Ryan Sipes arrives with his flat track bike and dominates the 450 main event.

Dr. Anthony Fauci officially requests to study Ken Roczen’s DNA. How an athlete can be stricken by such a wide array of broken bones, viral difficulties, asthma, Shingles, and a flat tire while then returning strong enough to dominate a 450 main event at altitude has medical professionals worldwide baffled.

Daniel Blair arrives in a great mood, only to be immediately slapped in the face and back into place.