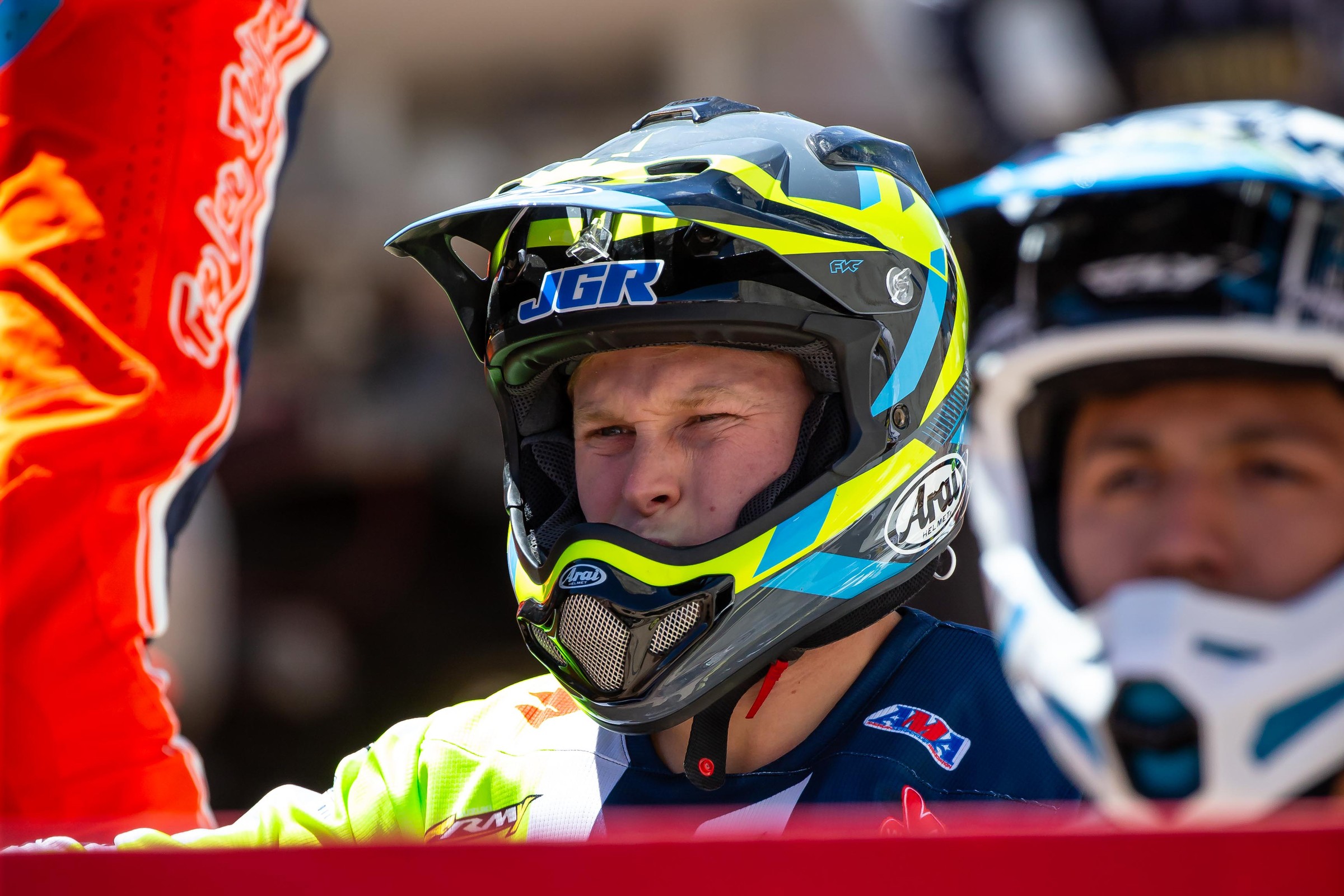 How did the race go?
Yeah at first I was just pacing off of Austin [Forkner] at the beginning and I felt fine. I ended up making one mistake about halfway, and I missed the long rhythm. I got shuffled back to fourth pretty quick, and from there I felt like I rode tight. I hit a wall, basically, and it was pretty hard to survive the race from there. I feel like I really put myself behind the eight ball, and I can’t be doing that.

Is some of this due to the nerves returning after such a long layoff?
Being at the races is a lot more pressure, the whole day is a little more hectic and stressful. So that definitely has something to do with it, but I’ve been in the racing environment long enough for that to feel comfortable to me. That shouldn’t be a problem. No excuses. Going forward I just have to get some flow. It’s good to get the first round out of the way, I’m pretty confident going into Sunday.

What was your prep coming in and what’s your plan now?
We rode the day before the race, probably too much, I think I rode for an hour, and maybe that was part of the problem, I had a tough time with recovery. You have to adjust to the altitude and get used to the bike, you come up short a few times on the first few jumps. You have to playing around with gearing. I did a little light recovery today on the mountain bike, but my East Coast teammates are going to ride tomorrow [Friday]. It’s my call [if I want to ride]. I am a little nervous. It’s kind of up to me, so I’m not sure. I might just ride a little, make it more of a recovery ride.

How was the vibe and how did it go?
The vibe was good, I felt really good the whole day, and I was consistent in qualifying, around P3 and P2. Heat race, feeling good, made a mistake in the whoops and crashed. Come to the main, the whole main event was a struggle. I had a really good start but I kind of slid into underneath Cooper and Forkner. Just that whole main event I was struggling to find a flow. I wasn’t pushing much, I was in a comfortable spot, like, my heart rate wasn’t too high, I was feeling good, but the whoops just caught me and I crashed. My bike went to the left, I went right, then we ended up both going right. Besides that, I was happy with the way my day started off, I just need to make sure I keep going throughout the day with that.

Looked like you almost had the holeshot in the main, but the first lap was not so good. Then you started to run the pace for a bit. Was it hard to get used to being back racing on that first lap?
I had a really good start, I was a little off balance but I kept it pinned, I even had one leg off just to get balance. I just struggled that whole main event. I just struggled with lines and I wasn’t flowing. First lap, it had been awhile since I had raced, I was trying to get used to that first lap sprinting and stuff. I was definitely disappointed with my performance. I should have been up with Cooper and [Dylan] Ferrandis and that. I made another stupid mistake, and at my level, being a professional, I shouldn’t be making those mistakes. I definitely wasn’t happy—what I got, I shouldn’t be getting.

You’re trained by Johnny O’Mara, and he’s known for having an even-keeled demeanor on things. Does he try to instill that in you, or does he realize you’re 16 [years old] and you run off of a lot of excitement and motivation at times?
Yeah, he has to keep reminding himself that I’m 16 and that stuff. He tries not to get too frustrated. Has to calm me down and stuff after the races, I put so much pressure on myself. I’m so young, and then there’s all the media and that stuff. But, yeah, he definitely helps calm me down. He’s a good guy to have in my corner.

How is the trip going and how did your race go?
I think we’re all just really fortunate and happy to be back. It had been 123 days—that’s literally a third of the year. I did go through parts of the quarantine where I was like, “Screw it lets have that extra pizza and beer.” Once we found out the schedule, it was like “Okay, it’s time to crack down and get ready!” I’m happy to be out here racing, it’s too bad we don’t have the fans, but when you’re out there racing, the team managers and the whole industry is still watching, so you still get that adrenaline buzz. It took me awhile throughout the day to get back into racing mindset—I was still in vacation mode and mindset, I feel.

The Suzuki RM-Z250 has taken some criticism for horsepower, but you and the JGR team have gotten results out of the bike. Were you nervous coming and racing at elevation, or did you know that you would have a good baseline package?
I’m not gonna lie, I was a little nervous coming up, we didn’t have a lot of R&D up at altitude, but we broke the race bike in the day before at a local track, and I was actually pretty surprised. JGR guys, Dean Baker, they did their homework. Gearing wise and EFI wise, the bike was pretty dialed in. In the race, yeah, I thought we were pretty good. I was able to start in second gear and we got pretty good starts, I thought we’d be starting in first gear for sure. After the supercross triple, the big rhythm, you had to go 2-2-3-3. That was pretty tough, and I was able to get it pretty consistently in the heat race and the main. So the horsepower was definitely there. It definitely helps being 135 pounds!

You’re a veteran, did you shake your head watching some of those crazy battles and take outs in your heat race?
Yes and no. The first East Coast race in Salt Lake City, the track was really dry. So I knew they would water it heavily. That’s the only way it’s going to be good for the main event, you have to water it for the heats. After qualifying, when I saw I was in the first heat, I was like “Dang it!” I knew it was going to be terrible. I was just riding around trying to stay up, it was hard to even do some of the corners. It’s entertaining, though, watching some of those guys just knock each other out.