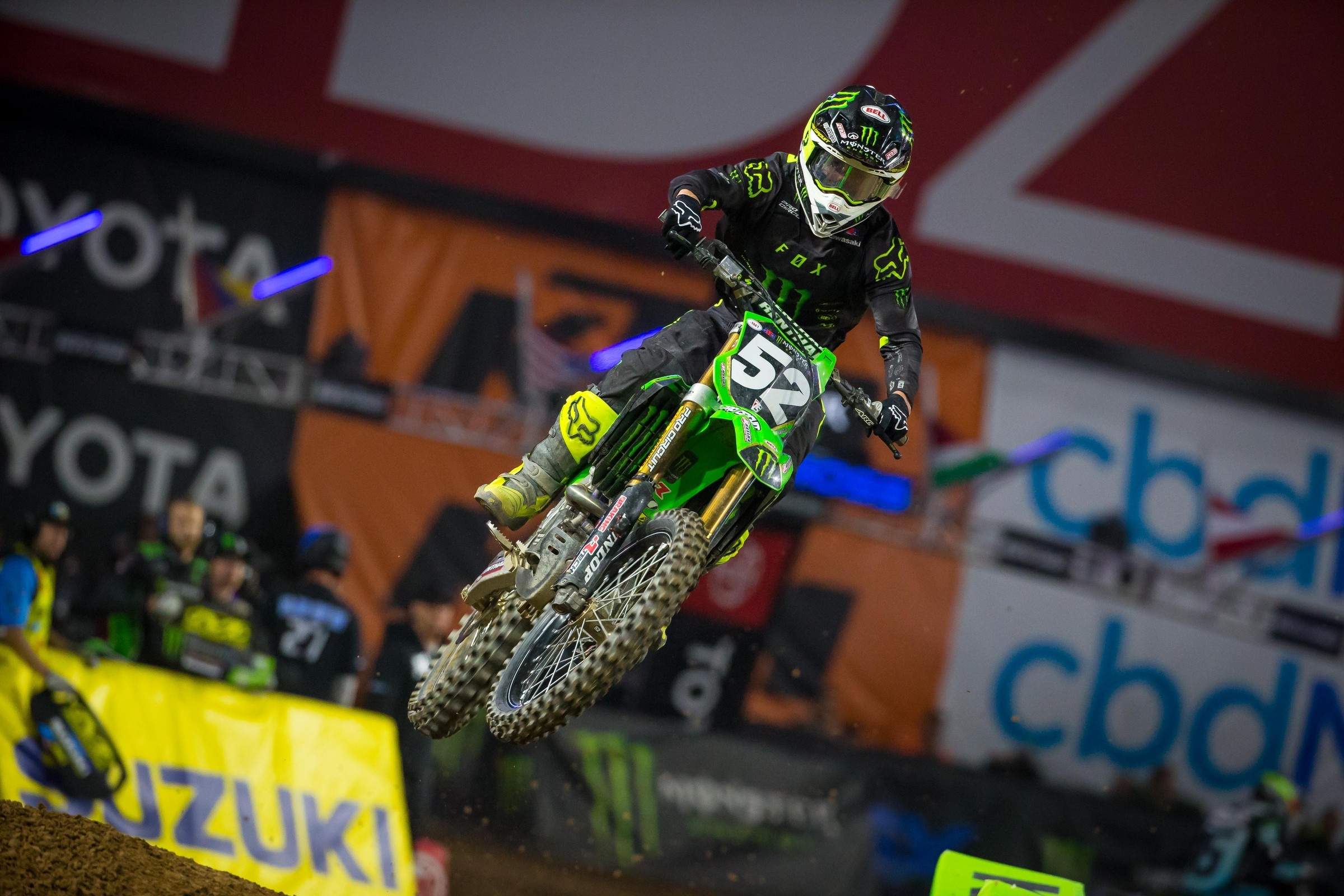 Remember when Dylan Ferrandis caught and passed Austin Forkner two weeks in a row to take successive victories that were met with a chorus of boos from a partisan crowd? Maybe you don’t. Those races marked the last time the 250SX West Region Championship saw action, nearly four months ago. But hold the excitement, as the West is finally back, taking its first gate drop Wednesday in Salt Lake City after the first three SLC rounds hosted East Region events.

With only three rounds remaining in this championship instead of the four originally planned (only one East/West Showdown instead of two), these gate drops hold much more value to Forkner and Anaheim 1 winner Justin Cooper. Ferrandis, Cooper, and Forkner have clearly established themselves as the championship trio at this point, but there’s much more to this class that can’t be forgotten.

If we look way back to that Anaheim 1 opener, it would be easy to forget Forkner nearly crashing out of the lead before violating track limitations and being slapped with a two-position penalty that ultimately dropped him to fifth. Each of the title contenders had what they would describe as their bad race through the first six rounds. Forkner’s bad race wasn’t actually the penalty but instead a hard crash at Anaheim 2 that left him down in 17th at the end of the night.

For Justin Cooper, he actually held the points lead up until round five as he’s been on the podium at every single round except the fourth round in Glendale. A rough day filled with crashes and some untimely bike stalls was somewhat saved when Cooper won the final main event of the Triple Crown to salvage a ninth on the night. He now sits just seven points down of Monster Energy/Star Racing Yamaha teammate Dylan Ferrandis.

Ferrandis has been the definition of riding through the field in the first six rounds. No, this is not a jab at his pass attempts, the guy has literally had to recover from bad starts at essentially every round. Though he does have three wins to his credit thus far, his bad round came in the form of a 12th in St. Louis when he tangled with Michael Mosiman on the first lap after yet another mid-pack start. This is where the problem lies for the defending 250SX West champion. With a narrow points lead and three rounds left to go, he opens up a big weak point if he continues to suffer bad starts. It just takes one more night like St. Louis and Ferrandis might see the championship slip away. On the flipside, Forkner and Cooper are both considered great starters, and this could be a huge key in this championship.

Behind the title fight lies several storylines to keep an eye on. Perhaps the one most interesting is the return of GEICO Honda's Jett Lawrence who we last saw on the ground with a broken collarbone—just moments after getting passed in the battle for what should have been his first-ever supercross win. Lawrence is fully healed and ready to do battle once more in what will be just his fourth ever supercross start. He also brings along a close friend. His older brother, Hunter, will finally make his AMA Supercross debut at round 14. Hunter had been injured both times he was preparing to race supercross and was again expected to miss the 2020 campaign before the long break opened up the opportunity for him to race again. Keep an eye out for both Lawrence brothers starting Wednesday.

Other hopefuls include their GEICO Honda teammate Christian Craig, Troy Lee Designs/Red Bull KTM’s Brandon Hartranft, and Rockstar Energy Husqvarna’s Michael Mosiman. All three have seen the podium thus far in 2020 and might just have something to say about these race victories down the stretch. Craig would certainly like to turn his fortunes around after three of the most forgettable weeks of his career back in mid-January. He is also fully rehabbed from a fractured hand and pinkie sustained at round four in Glendale.

Also, worth noting are riders like Alex Martin and Luke Clout, who were consistent top five threats before the break. Martin, of course, is the lead man at the JGRMX/Yoshimura Suzuki Factory Racing effort and has seen his share of podiums through his career. Clout on the other-hand has been the breakout rider of the year riding for the Honda Australia-backed Penrite Honda team. Missing from this group will be Jacob Hayes who suffered a broken femur in a big practice crash just a few weeks ago. Hayes had also finished inside of the top ten at four of the six rounds.

Three rounds remain and just 13 points separate the front three in the championship. Expect an all-out battle once the gate drops again on Wednesday.