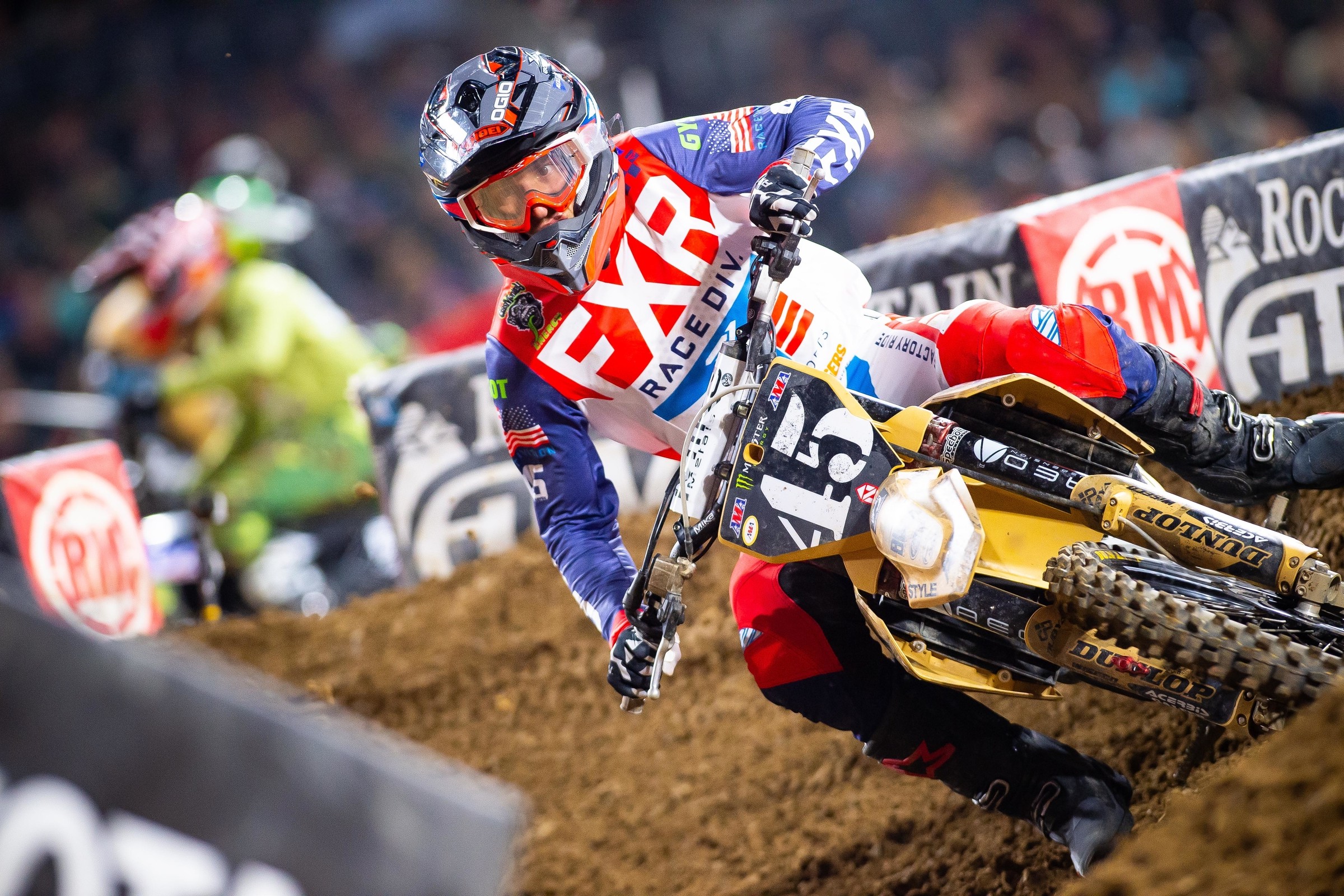 Comment: Anstie hasn’t raced since having surgery on his Achilles tendon before supercross. He will return to racing this summer when the Lucas Oil AMA Pro Motocross Championship kicks off.

Comment: Bogle is out for supercross after a big concussion took him out of action in Glendale.

Comment: Cianciarulo sustained fractures in his back when he crashed and was run over by Cooper Webb at SLC 1. He’s out for the remaining rounds of supercross.

Comment: Martin recently had surgery to fix a torn ACL suffered in St. Louis. He also sustained a torn patella tendon, a broken big toe, and two broken metatarsals in the crash. He’s out for supercross.

Comment: Musquin will not line up for any supercross rounds this year due to a knee injury sustained before supercross. He hopes to be ready for the Lucas Oil AMA Pro Motocross Championship.

Comment: Ray went down on Sunday and tweaked his knee. It’s swollen and he’s sore, but he plans on giving it a go on Wednesday.

Comment: Savatgy is back on the bike and will return to racing this summer for the Lucas Oil AMA Pro Motocross Championship.

Comment: Tickle sustained a fracture in his right pinky metacarpal during practice on Sunday in Salt Lake City. He missed one race but was able to qualify at the next race. He’s in for Wednesday.

Comment: Craig fractured bones in his hand and finger in Glendale. He’s in for Wednesday.

Comment: Hayes sustained a compound femur break, shattered knees, and a fractured wrist while getting ready for the return of supercross. He’s out for the foreseeable future.

Comment: Lawrence broke his collarbone and sustained a concussion at A2. He’s in for Wednesday.

Our future is bright with these two refreshing goobers sitting in a hot tub with their team shirts on ???? Talent and personality for days....... pic.twitter.com/60NsUiX1hK

Comment: Oldenburg suffered a partial tear in his ACL and tore his meniscus while practicing earlier this year, but he’ll line up this Wednesday.

Comment: Bailey went down in his heat race and sustained a thumb injury. In an Instagram post he described it as a day-to-day injury, and said he plans on being able to race when the 250SX East season resumes.

Comment: Crown is out due to a concussion suffered in Atlanta.

Comment: Hampshire underwent surgery to repair a torn ACL in his knee when the season was put on pause and is out for the rest of the supercross season.

Comment: Harlan crashed on Wednesday and hurt his wrist. X-Rays didn’t reveal any broken bones, but the pain was too much to race.

Comment: Hill will miss the remaining rounds of supercross due to a dislocated and fractured hip suffered in a crash while practicing at ClubMX.

Comment: Marchbanks went down hard during the SLC 3 main event, which prompted a red flag. The initial word is that he’s sore, but hopes to be back when the 250SX East division resumes.