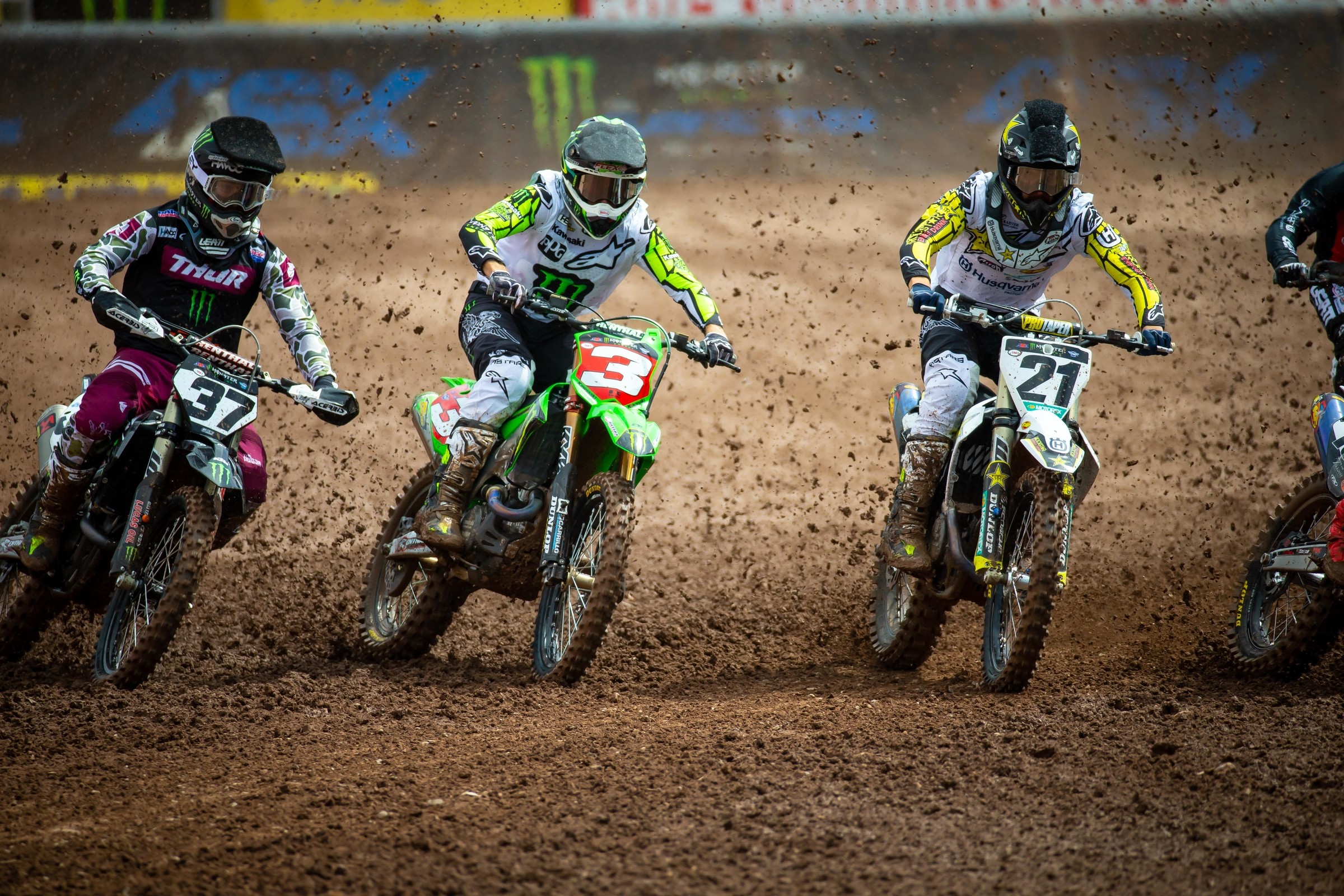 Three races in the same stadium and the same location, and yet three completely different races, at that. From last Sunday’s heat and dust to today’s hellacious rain and borderline mud conditions, Monster Energy AMA Supercross has served up the full menu during its return, including, now, an all-time classic duel fans will be talking about for a long time.

If only they had been able to see it in person.

Regardless, even without the energy of a crowd, and even in conditions that usually don’t produce good racing, Monster Energy Kawasaki’s Eli Tomac and Red Bull KTM’s Cooper Webb waged a 20-minute duel of wills and smarts, passing each other back and forth while bouncing off of lapped traffic, creating new lines and leaving the victory up for grabs until the final turns. Tomac emerged victorious even after Webb dug into his usual bag of late-race tricks, surviving yet another high-pressure test in a season that has been full of them. Is this championship-level stuff? You’d better believe it, although Tomac also made it clear he’s racing each round on its own, reaching deep for wins, and not counting points.

“It was a freaking sweet race, easy to say for me because I won, but really fun,” said Tomac. “I mean, the win is sweet, it’s easy to be happy, but we passed each other twice. A lot of time in these mains you’re either getting passed once, by the guy who wins, or you make the pass and you pull away. Here, we were just scrapping, even the last turn, I was dabbing, just freaking pinning it and hanging off the back. It was just a good race! As a competitor, everything was right.”

“Yeah overall it was an incredible race, we were laying it all out there,” said Webb. “I think I was first to the first turn but Zach [Osborne] snuck inside of me. Once I cleared him it was me and Eli.”

The lead duo pushed so hard they started lapping deep into the field…and then doing it again! Fourth-place Zach Osborne got lapped and tenth place Ken Roczen (who faded again following a rough run at the last race) was lapped twice. Further, while these conditions usually create a one-line track, the duo managed to find new places to make passes throughout the race.

“I don’t know,” said Webb of how they lapped that far. “At one point I saw Kenny again and I didn’t know what was going on. I pushed as hard as I could, we were switching lines every lap. I don’t know, it wasn’t a 100 percent mud race, I think we were both wanting to win.”

“Surprisingly we were getting through the whoops, and I think that’s where Cooper and I were making big time on everyone,” said Tomac.

The whoops did play the lead role early, as Tomac blasted past Webb in them to take the lead. Webb adjusted his line and then, miraculously, actually started gaining back all the time he lost in that section, in the same section!

“I was doing that line in the whoops, it felt good, but after he passed me I saw it wasn’t the preferred line,” said Webb. “He led, I led, I think we both led twice. The lappers were insane. From my end, we both left it all out there. I think I uncorked a cool rhythm, but I just watched the highlights and he did that 3-3-3. I feel like it was a race for the ages, and it’s cool to go to the toe-to-toe with the red plate holder. It’s cool to be able to run with him.”

After both had the whoops dialed, the rhythms were next, and Tomac finally figured out a new line.

“The one rhythm that was instinct, that second lane with the double and the triple-triple, I knew it was there but I didn’t know how the transitions were going to form up,” said Tomac. “To be honest I was bad in that rhythm section to start the race, I missed it the first three or four laps. That was a line I had to adapt to, for sure.”

Once Tomac had that down, it was up to Webb to find something else, and he did it by trying to jump and land on the inside of the supercross triple. “It was funny, the suspension guy joked about it before the main event, and I was like, 'You’re delusional.' But we got to a point with two laps to go where I was like “F it lets’ go for it!' It was a good line, but I guess it wasn’t enough. I was expecting to case it for sure.”

As it came down to the last lap—Tomac had made a brief push to get away but got thwarted by lappers again—Webb tried his inside line after the triple and got halfway to making the pass, but Tomac hung on. The whoops loomed, but this time the lappers gave the worst of it to Webb, as Tyler Bowers slowed him. It was just enough for Tomac to escape without one last challenge. Still, what’s impressive is that after all that heat, they kept the racing clean and respectful, and even kept it that way after the race. Both riders mentioned that lappers cost them both, equally, instead of using that as any kind of an excuse.

Making no excuses, also, was third-place Jason Anderson, of Rockstar Energy Husqvarna. He rode well, passing his teammate Osborne to take the podium spot. “I think I had a little more leg than Zach in the whoops,” joked Anderson. “Next thing I know I was in no man’s land. Those guys up front waxed me. I feel like I’ve been able to work on my weak points. Compared to Sunday my start was better. I’m just going to try to keep it going.”

Osborne was fourth, a good follow-up to his third on Wednesday. Malcolm Stewart was strong again, this time scoring a career-best fifth on his SmarTop/Bullfrog Spas/MotoConcepts Honda. Dean Wilson was sixth, completing another great night for the Rockstar Energy Husqvarna team. Justin Brayton was seventh ahead Martin Davalos, who has been rock-solid in the three races in Salt Lake City. Justin Barcia was ninth and Roczen, who lost the pace again here like he did on Wednesday, fell back to a disappointing 10th.

The 250 race didn’t disappoint either. While it didn’t offer the instant-classic racing of the 450s, it did provide plenty of title drama. Monster Energy/Star Racing Yamaha’s Shane McElrath and GEICO Honda’s Chase Sexton were tied in points coming into the race. Immediately, it looked like McElrath’s Salt Lake City run would continue, as he made a pass on Sexton in the second turn of the race, and Sexton went off the track…and then crashed a few turns later as McElrath took off.

Then, a red flag which completely changed everything. Garrett Marchbanks went down hard which led to a red flag, restart, and second chance for Sexton. He made the most of it, pressuring McElrath from second, and then Shane bumped into a lapped rider and went down. Sexton took over from there.

“Got a decent start, I think I was second, and I was kind of just riding behind him, because the first time I made a stupid mistake,” said Sexton. “I got close and he got together with a lapper, and I ended up running into the same lapper, and it broke my front brake system. It was sketchy with the way the track was. I felt like I rode decent considering the traditions, but that red flag played in my favor, I was like 'Yeah, now I have to win.'”

Watch McElrath run into Coty Schock and go down:

“It was a bummer, I was ready to go, I think it showed, I got into the lead right away in the first one and the second one I pulled a holeshot,” said McElrath. “I felt like it was time to go. I’m not sure what really happened to Garrett. Bummer to see him have to get hauled off, and to see it get red flagged, because we were in the perfect position. I think we all were a little wet from having to sit there in the rain a little bit, but it was another good start, and really just tried to go. I was doing okay, just crossed paths with that lapper. Gloves were slippery, hands were kind of frozen. It is what it is, but to come out second in a mud race, I did my best so I’ll be ready for next Wednesday.”

The red flag, the restart, and the flipping of the script now leaves Sexton with a three-point lead and critical momentum with two 250SX East races left (one more stand alone round, and the East/West Showdown finale).

“I got kind of lucky with all the stuff happening and I was able to come hit these races in Utah,” said Nichols. “I would have liked to have a little more time, but I didn’t know where I was going to be. I’ve ridden with Shane, but obviously, it’s different when you have championship intensity. I just didn’t have it tonight, but being able to race, and two podiums in the last two races is awesome for me.”