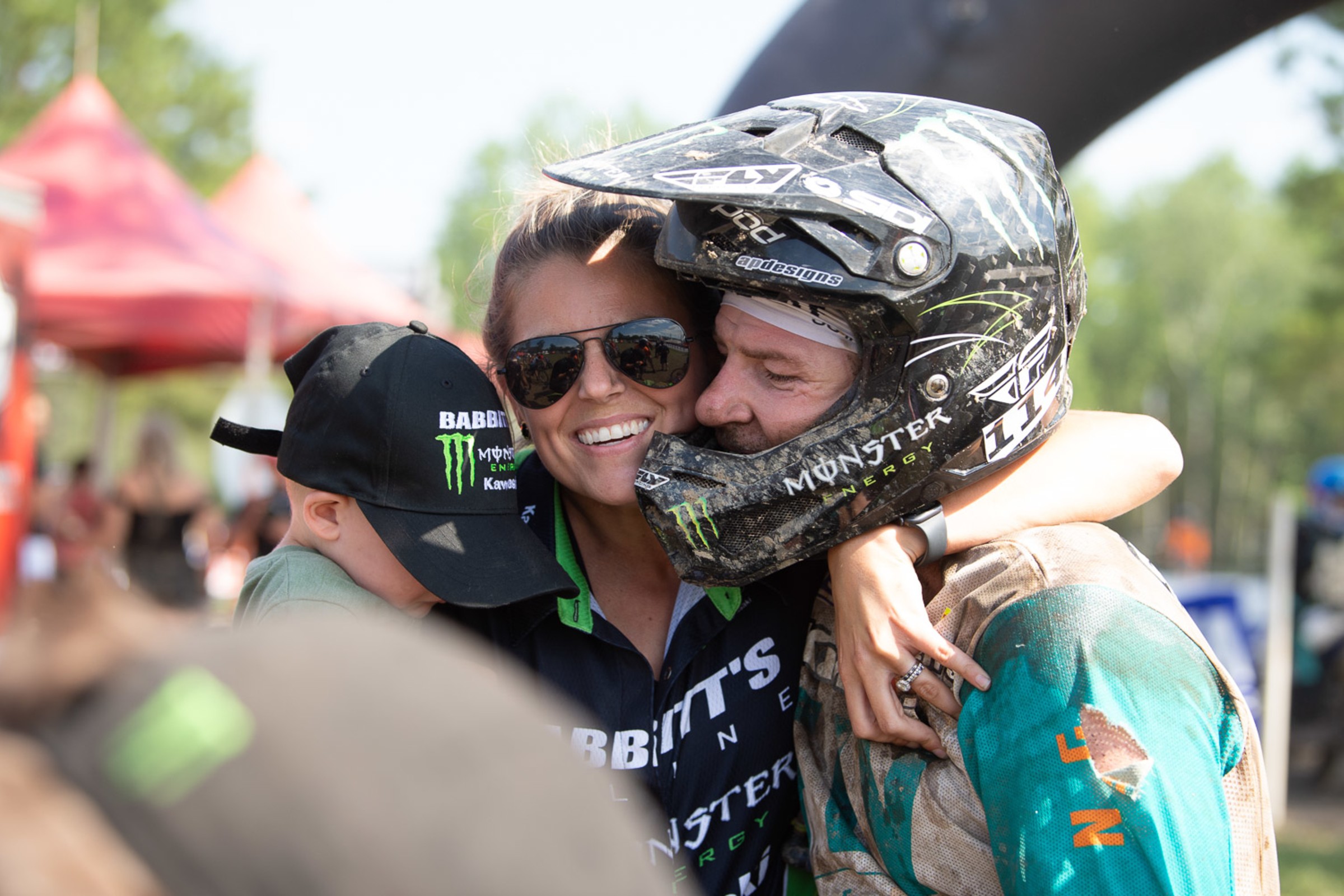 Round five of the 2020 Grand National Cross Country (GNCC) Racing season saw the series head back to South Carolina for the Camp Coker Bullet GNCC at Moree’s Sportsman’s Preserve. Tropical Storm Bertha would dump rain on the facility throughout the entire Wednesday prior to the event, which left some swampy conditions on parts of the course for Saturday’s ATV race. However, reroutes and some new trail for Sunday’s motorcycle race made for a really enjoyable course for the riders, and some pretty intense racing action for those waiting to see how it all unfolded. Here’s what we learned.

Josh Strang came into GNCC Racing back in 2007 as a young teenage rookie in the XC1 class. He would go on to win the 2010 GNCC Grand National title and continue to be a title contender for several years, minus a stint out west in 2012 after the Suzuki Off-Road team closed its doors and Strang was left without a ride. In 2015 and 2016, Strang was looking as strong as ever battling Kailub Russell for the championship. However, a couple of injuries and some tough luck would leave Strang struggling through 2017 and 2018.

In 2019, Strang joined the Monster Energy/Babbitt’s Kawasaki team and in what would ultimately be a learning season for the team, Strang landed one podium and three additional top-five finishes. This season, Strang has worked extra hard to return to the level he was used to, and the hard work has shown with four podium finishes in the first four rounds. However, round five would see Strang come in even stronger than the first four. Strang would work his way into the lead on the third lap, and at one point even opened up more than a 20-second lead over Kailub Russell.

Russell would put on a charge and eventually find himself back in the lead but riding the smaller 350cc KTM versus Strang’s 450 Kawasaki, Russell would have to stop for one last splash of gas and allow Strang to inherit the lead once again. When the white flag flew, it looked like the battle for the race win would be one of the tightest and most intense of the season. Strang led, with Russell right on his rear wheel. However, Russell would suffer a bit of misfortune we’ll discuss in the next section, and Strang would be able to cruise to the win.

Strang’s win would be his first since 2016 and Kawasaki’s first GNCC win since 2010. In doing so, Strang also broke Kailub Russell’s win streak after Russell went four for four in the opening rounds. Strang (123) now sits second place in hunt for the GNCC National Championship, 23 points behind Kailub Russell (145).

Listen to the Instagram Live video Jason Weigandt did with Josh Strang earlier today where they talk about the Camp Coker Bullet GNCC, racing resuming, Strang's injury that hindered him for two years, and Kawasaki's rebirth in GNCC with the Babbitt’s Online/Monster Energy/Kawasaki team.

@JasonWeigandt chats with the Monster Energy @TeamBabbitts Kawasaki rider who scored the win at the @Fmf73 Camp Coker GNCC ☝????

It’s not very often that we hear about a big mistake coming from Kailub Russell, but even the best have their moments, and Russell would fall victim to one of those at the Camp Coker Bullet GNCC. When the lead duo of Strang and Russell took the white flag, just a mere 1.5-second separated the two. Strang was looking to keep Russell behind him, but KR had inadvertently discovered a line where he believed he could make a pass near the end of the lap.

On the previous lap, Russell had made a small bobble, and when corrected, he ended up on a slightly different line that he realized would be the perfect spot for a last lap pass for the lead. Unfortunately for Russell, the opportunity for that pass never came. With just around three miles left in the race, Russell was chasing Strang down a fast stretch around a couple of dry duck hunting ponds, which the GNCC track crew had dubbed the “Daytona 500.” At the end of one of the straightaways, Russell’s front end would knife into the berm, which caused him to endo off-course and end up in a fence several feet off the track.

However, this isn’t your run of the mill chain link fence. This fence is meant to hold wild boars inside of a large enclosure, so it’s thick poles with thick metal and Russell would find his bike and his body wedged into the fence. It took quite some time and a little help to get back on course, and by this point Strang was long gone. Strang and Russell had built enough of a lead over third place rider, Grant Baylor, that Kailub was able to salvage a second-place finish, but it didn’t come without struggle.

The crash was hard and Russell himself said it was an incredibly difficult push to get to the finish. However, he made it and still pulled off a gutsy second place finish after suffering a crash that would have left some folks headed for the truck… Myself included!

With Strang and Russell setting the pace out front, the race was on for the third-place position. Layne Michael, Josh Toth, and Grant Baylor would all hold the third-place spot at one point or another during the race and they also had challenges from Jordan Ashburn and Andrew Delong, who were both riding incredibly well. Unfortunately, Delong would suffer a mechanical issue on the final lap that would take him out of contention.

Grant Baylor would prove to be the man on the move as he came from as far back as seventh place at one point in the race to end the day on the podium in third. Grant is no stranger to this type of performance as there have been several instances where he’s been able to dig deep and push from a position outside the top five, to run in podium contention. Jordan Ashburn would also work his way back up as well. After running in the fourth-place spot, he would drop to sixth with just a few laps remaining, and then work his way back up to end the day in fourth.

Josh Toth held the third-place position for the entire middle portion of the race but would end up suffering some stomach issues that made the late portions extremely excruciating but would still salvage a fifth place finish. Toth stated on Instagram that he will be working on his hydration and nutrition leading up to the next race, which could ultimately be that little bit extra he needs.

As has been the case with the XC2 class all season long, some of the most intense racing on the course took place between those gunning for the XC2 class win. These guys have battled back and forth all season long and the Camp Coker Bullet GNCC was no different. Johnny Girroir would lead the XC2 class opening laps but would drop back to fourth place around the halfway point with Mike Witkowski finding himself in the class lead. Late in the race, Girroir would put on a charge to come back to the front of the XC2 pack and eventually take the race win.

Mike Witkowski would hang on for second while previous round XC2 winner, Craig Delong, would end the day in third after working his way up from fifth place on the opening lap. Girroir, Witkowski, and Delong have traded wins through these first five rounds, and each rider continues to show more and more intensity each week. These guys have made the XC2 battles some of the most exciting racing on the track and are definitely establishing themselves as the up and comers headed for the XC1 ranks in the coming years.

Of course, these guys weren’t the only ones contending for podium finishes. Ryder Lafferty bounced between the second and third place position for the majority of the race before ending the day in fourth. Ryder missed the opening rounds of this year’s championship with injury but came out swinging at the previous round in Georgia to land a career-best second place in XC2. Fourth is a very respectable finish but now that Ryder has had a taste of the podium, it’s only a matter of time before he starts to become a more consistent podium contender.

Liam Draper also put in a very good ride to round out the top five in the XC2 class. Liam continues to improve at each event this season, and he too is no stranger to the XC2 podium and even has an XC2 win to his credit, coming at last year’s Mason-Dixon GNCC. The next event will be pretty similar to the Mason-Dixon, so Liam could come in swinging.

There’s been a lot of discussion as to what comes next for GNCC racers and it looks as if next weekend the series will head to Mount Morris, Pennsylvania, for the High Point GNCC. Pits, parking, start, and finish will be based out of the Mathews Farm property across the street, which hosts the Mason-Dixon GNCC. However, the hope is to cross the road and run the bulk of the course on the High Point Raceway property. While portions of the Mason-Dixon GNCC were ran at High Point in 2018, the last time High Point hosted a GNCC event was 2002!

This is sure to be a cool event but will be even more exciting to see if Josh Strang is able to begin a win streak, or if Kailub Russell is able to rebound and return to the center step of the podium. There’s also all of the excitement of the XC2 ranks, which promises to continue a high level of intensity as has been the norm this season.