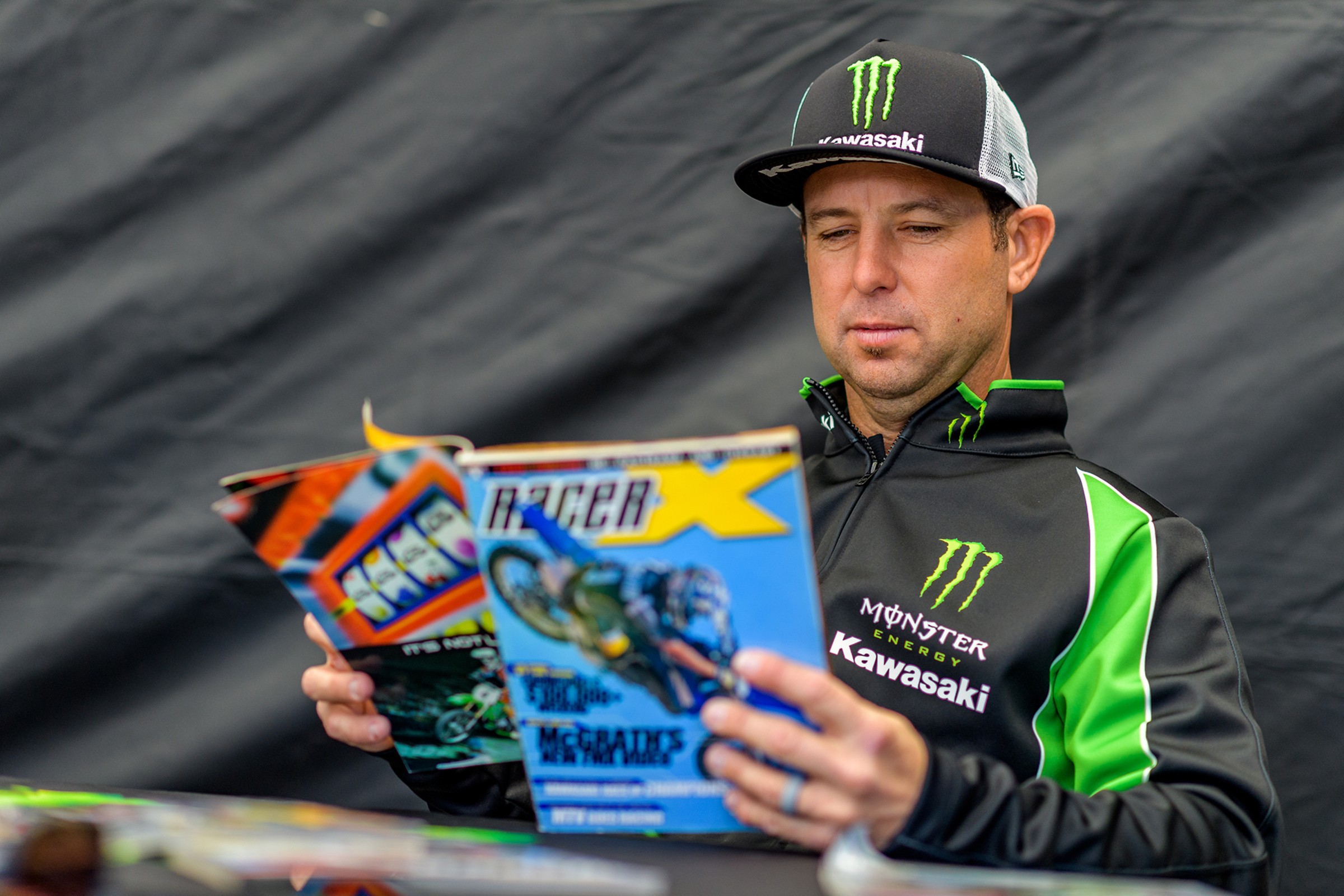 On Saturday night, March 17, 1990 and with 18,197 fans up in the stands looking on (including this one) inside Sam Boyd Silver Bowl on the outskirts of Las Vegas, Nevada, a young Team Green rider from Southern California named Jeremy McGrath rode his Kawasaki KX125 to the first American Motorcyclist Association supercross main event win of his career. Three years later, this time on January 23, 1993 and inside Angel Stadium in Orange County, California and before 55,817 fanatics (including this one), McGrath raced his works Honda CR250 to the first premiere class finish of his career. A decade later, by the time McGrath called time on his career, he had amassed 72 supercross main events and an astonishing seven AMA Supercross Championships and had firmly established himself as, far, far and away, the greatest supercross racer who has ever kicked a motocross bike to life and ridden around a football or baseball stadium. All this withstanding, who better to seek out and sit down with to get his take on Sunday’s Monster Energy Supercross Series round from Rice-Eccles Stadium in Salt Lake City, Utah? A 45,807-seat NCAA college football stadium where the University of Utah Utes fight their wars, the venue marked the return of the Formula 1 of motocross and the first supercross main event in 85 days, and it was there that we asked the greatest supercross racer of all-time to keep an eye on things and report back to us with just what he saw play out from the moment he turned on his TV in suburban San Diego. Check it out.

“I woke up and of course I was super-psyched that racing was going to be back,” said McGrath of his date with his TV set and the launch of the restarted Monster Energy Supercross Series. “It was a little strange that it was going to be on Sunday. There were a few little things were I was like, ‘Oh, okay, we’re racing again, but it’s a Sunday and it’s a day race.’ I was just kind of running through all the scenarios in my head. I was thinking, ‘What’s it going to look like on TV today? What is this going to be like?’ Nevertheless, I was excited from a fan’s perspective to just see these guys race. It was good. I was psyched.

“You know, I had thought about going over to Utah to go mountain biking somewhere and then go to the race and then to make a few days of it, but honestly, then I saw Ellie Reed’s post where she showed all of them getting tested for the COVID thing where they out that swab down your nose and almost into your brain and I wasn’t so sure about that. That looked kind of sketchy to me. I don’t know. I still might go to a race, but that first one kind of took me back a little bit and I was like, ‘Okay, yeah, I think it’s better to get round one here out of the way and just see how it goes.’ I know they’re not taking many people to the races right now. I don’t even know if I would have the option to go to the races, to be honest.

“I turned the TV on come race time and the first thing I thought of was that they were all outside and everyone was wearing masks and I thought that was kind of strange. And for the pits to be empty like that? I don’t know. It kind of reminded me of a practice day, you know? Nobody was around. It looked like the Vegas supercross where everyone practices and does all that stuff during the day. It looked exactly like that. The track itself looked a lot like Vegas, except that it didn’t have that outdoor section that goes outside of the stadium.

“Also, the weather was good. You never know what can happen in Salt Lake. Weather can totally come in and go out. I remember one year we were there and it was sunny in the afternoon and they canceled practice and then literally two hours later it was snowing. They got great weather on Sunday. The track condition was also good. It looked a little bit dry at the end of the race, but I think that throughout these next few weeks that they’re racing there, the water is going to mixed into the dirt and it’s probably going to get better and the conditions will get better.”

At 1 P.M. Pacific Standard Time and before his TV tuned to NBC 7 San Diego for the broadcast of the eleventh round of this year’s radically altered Monster Energy Supercross title fight, Jeremy McGrath pulled up a seat and made mental notes on what exactly played out.

“It really was fun watching Eli ride that track,” enthused McGrath on Monday morning. “He was doing that slide in turn one and taking the slide into a power wheelie into a manual over a jump, it was some serious bike skill watching Tomac do that. That was really fun to watch because Eli was making it look so cool. I liked. That wouldn’t have happened if that track had been super-tacky or whatever.

“The 450 race was good. In the beginning, all the guys were up front. Blake Baggett got the holeshot and that was pretty cool. You had Justin Brayton up front. Roczen was there and was right behind Eli. Eli kind of did what he typically does and kind of fumbled around for a few laps and then Cooper Webb came in there and I just thought to myself, ‘Oh man, this could be a problem as Cooper Webb is pretty tough sometimes on passing guys. Okay, Eli just has to stay clear of that.’ And from there, a couple laps into it, Eli just did his thing. Whatever triggered Eli to get going, he just started taking off like he always does and found some different lines and some different speed. I did notice that when he started riding the outside line, it looked like he really loosened up a lot and then that’s when he started going right to the front.

“I thought for sure Ken Roczen had enough speed to get to second,” continued McGrath. “When he was right behind Cooper Webb, I thought, ‘Man, you know you need to get second here.’ I thought I would see a little more push from Ken’s side to at least get to second place. Webb rode really well to get second and Ken wound up third.

“Jason Anderson did well to finish fourth,” furthered McGrath of who came next. “I guess typically Jason doesn’t really ride so good in the altitude, but both him and Zach Osborne were having some good battles. Anderson and Osborne finished fourth and fifth and I thought those guys were riding good.

“You know what, dude? I think most of the guys rode and raced really well. I really think so. I think the guys performed well. Those guys, they know where they belong. The series is more than halfway over and they know their position in the series. Yeah, they had to take a break, but I wouldn’t expect anything less. When they went back to the track, they know where they need to be. I thought for some reason that we might see something a little bit different from a couple other guys just because they’d had a break. Honestly, though, I think that for the first month of the whole COVID thing, I’m not sure how much riding everyone was getting in because they didn’t want to go to the hospital in case they had a problem or whatever. I don’t know who did and didn’t do what. Frankly, Eli has an advantage when it comes to altitude. It’s just where he lives. It makes a big difference. As it turned out, Eli was on his game. He was riding great. He was feeling great. You could tell in just the way he was riding that his confidence was up. It looked like it was his title to win.”

Now, Jeremy McGrath and all the rest of us supercross fans are settled in for another round of race-watching, broadcasting from Rice-Eccles Stadium.

“I would assume the track condition is going to be similar, just because now they now know a little bit more about the place,” pointed out McGrath of what’s about to come next. “I would assume some guys are even going to ride better just because they’re going to be in the same place and maybe made a few changes to their bikes, but I don’t see anything going on with Eli. I think he’s just got to relax a little bit, get some sleep and get back on that bike. I don’t see things happening too differently on Wednesday.” You could see just the little things he was doing on the bike that were so cool to watch. He looked so comfortable. Yeah, I’m sure Eli is going to go into Wednesday feeling really good, but you’ve got to stay hungry. It looked like everyone continued on what they had going. The racing was great. The first five, six, seven laps were super-good to watch. I would have liked to have seen Ken get second just because I want to see the title stay tight for a little bit longer, but Eli is trying hard to not let that happen. It was a good race for Eli and it was a good race for the fans. I liked it. I’m excited to tune-in for Wednesday.”