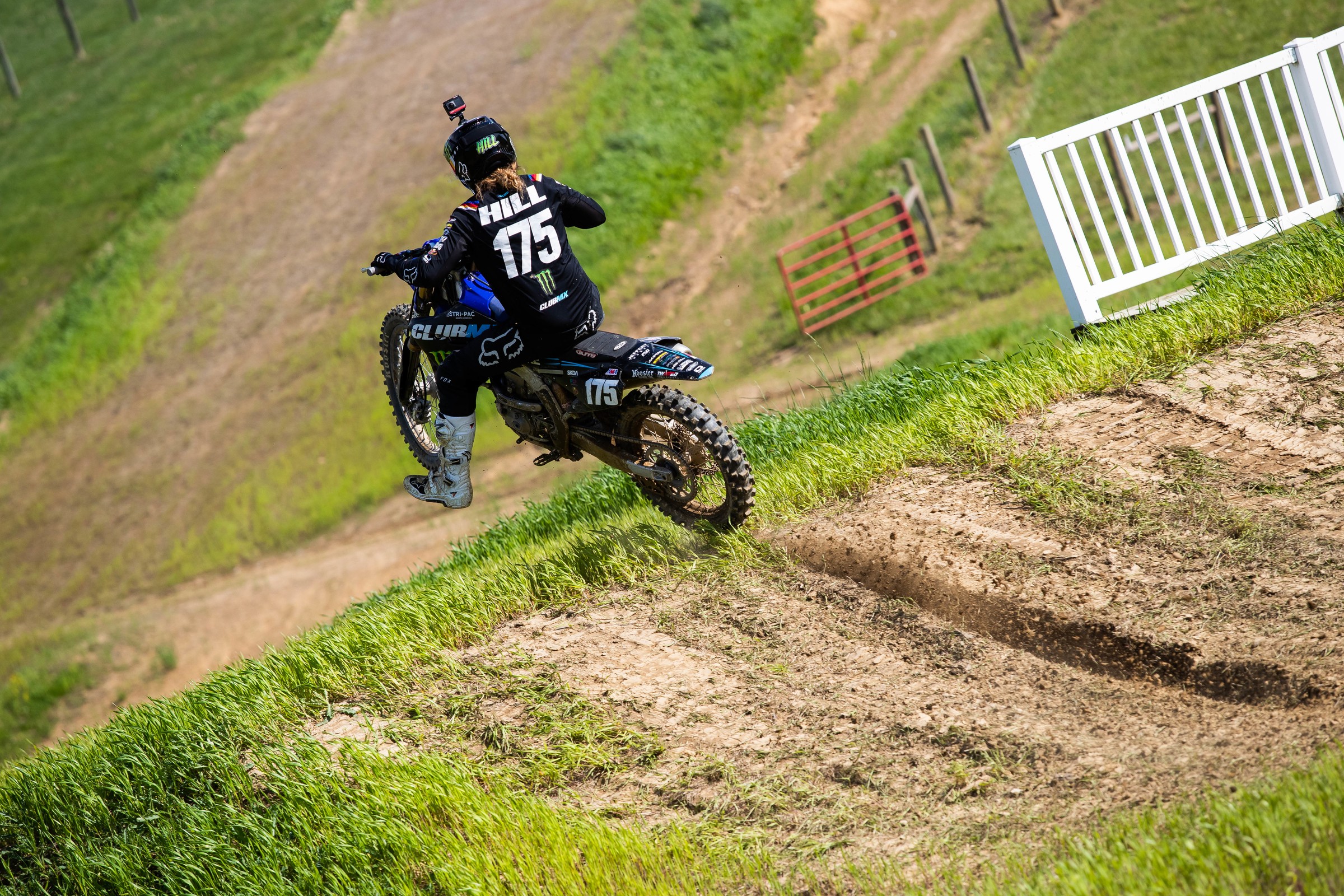 Upon entering the pro ranks in 2006, Josh Hill quickly moved from the 250 class to the 450 class, where he competed regularly from 2008 to 2015. Hill stepped away from racing to pursue other activities, mainly free riding. He returned to Monster Energy AMA Supercross in April 2018 briefly as he competed in three of the last five rounds of the championship for an injured Justin Barcia.

Hill returned to the racing scene in November 2019, which he spent in Australia competing in the Australian Supercross Championship with the CDR Yamaha Monster Energy Team. He then began training more and more and made his full-time return to the U.S. supercross scene as a member of the ClubMX team in the 250SX East Region. Back racing a 250 for the first time since the 2007 SX Lites West Region (as it was called then), Hill recorded finishes of 12-6-10-21 in the first four rounds of the championship before racing went on pause.

When racing shutdown after the Daytona Supercross, Hill resumed his free riding, including backflips onto an airbag in his yard and ripping around on his Alta Motors electric bike. Hill and Darryn Durham were invited out to High Point Raceway two weeks ago for a private riding session to rip up the grass-covered track. News broke that supercross would be resuming shortly after the ride day but unfortunately Hill suffered a practice crash last week that resulted in a dislocated hip, which will knock him out of racing in Salt Lake City, Utah. We rang up the fun, free-spirited veteran to talk about supercross, competing on the small bore bike again, riding at High Point, and his injury.

Racer X: You went down training at ClubMX and then you went to the hospital and got out the same day. Is that true?
Josh Hill: Yeah. I went down in the whoops. I just came in and got a little sideways coming in and just missed one. I’m normally pretty good at not doing that, but I just had a little mistake. I just had to try to correct it. It didn’t work out. Just kind of smashed my ankle over the top of one of the whoops and ended up popping my hip out. The ambulance had to come. Took me to a little local hospital. The guys there seemed to know what they were doing. Kind of sedated me a little bit and popped it right back in. I was out of the hospital in like three hours. It’s pretty good. I went and got it checked out the next day and they were pretty blown away that the little hospital there was able to pop me back in and send me out that same day. So, pretty good. Not a fun injury. I’ve talked to a lot of people that have had it. It’s painful. It seems like I probably did the least invasive I could have done with that injury, so that’s good.

So it was a dislocation. I’ve heard that with those basically it’s kind of dependent on how long it’s dislocated for. So were they able to get it back in quickly? How did that all work?
They were able to get it in. I went in. I was on the ground and got taken out in an ambulance, and from then on as soon as I got in they pretty much knew what they had to do. I was probably in and out of there in four hours, I would say, from the time that I got in there. They probably had me popped back in in two hours. They were saying that if you had it out for up to six hours you can lose your blood flow and that’s not good for the injury. But since I was able to get mine in in two hours, it seems to be on the up and up as much as it can be for this injury.

What is recovery time like for this?
Well, the guy that I went to, he wasn’t a sports specialist or anything but he said two months he thinks I can be back riding my bike. So that was pretty good news. I’ve got about two months to the date to finish [X Games] Real Moto. Supercross is kind of out of my timetable now, but I think I can get back in and get about two more solid weeks of filming for Real Moto, would be the ideal plan. I’ve got some really good stuff already. I just need to finish up this video. Hopefully be in the contention for a medal in that.

Then I’m guessing no plans to do any nationals or anything like that?
At this moment, I just need to focus on trying to get healthy and finish this video I’ve got. Then I’ll just kind of play it by ear. I hadn’t made any plans to race the nationals. I don’t think the team was planning on racing them. I was excited to come back and race these final supercrosses. Just a little mistake out there training cost me.

Let’s go ahead and talk about this whole High Point trip. First off, how did you get the invite? Then how was it? Totally grass-covered, national-caliber track. Nobody gets to ride something like that.
Oh, that was a dream come true, really. I was excited to do it. We had the video crew going and was getting, “Hey, we need you to ride down here and do this.” It wasn’t really until the end of the day when it just sank in how lucky we were to be out there riding that. When I pulled out of the place I had to stop and just take some pictures. That was a pretty amazing day. You never get to ride a national-quality track like that all to yourself and then to have it those conditions, just perfect. Just me and Darryn [Durham] out there riding, cutting lines wherever we wanted. It was definitely a day I’m not going to forget for a long time, that’s for sure.

So talk about what it is like to ride a grass-covered track as opposed to something that is actually prepped.
It’s just a little bit more deceiving because it looks like there’s perfect traction everywhere, but there is some areas that are a little bit slippery. So you kind of have to be a little careful. There’s some kickers and things like that hidden under the jumps that you’re not quite ready for. It was a blast. Once me and Darryn went out there and got a couple lines ridden in, it was pretty much game on. You could start carving ruts in and tearing it. It was a blast. Definitely so much fun to be able to ride that track with a bunch of intensity and just lay into stuff. It was a blast.

Go ahead and talk a little bit about that transfer you did kind of at the end of the day, from the landing of that big booter jump into the uphill triple. How did you see that?
We were just riding around and looking for some fun stuff to do. I noticed that you could probably step down pretty easily from where the landing of the big quad or triple or whatever you want to call that thing, and jump from that down into the gulley and then triple out. Kind of how [Eli] Tomac did in the national. That was fun to do, for sure. Looking at it and once I seen it kind of lined up, it was something I had to do. I love taking tracks apart and finding new jumps that weren’t maybe intended.

Seeing something that you can’t even do in a race anyway.
Yeah. Just something fun to do. It’s not like I’m going to get that opportunity again, so had to make the most of it and just try to take it as a blank canvas and go have some fun.

You were on a 450 out at High Point, but you have been racing a 250 all year in supercross. When you originally came to the pro ranks, you kind of graduated to a 450 pretty quickly. So what has it been like going back down to the 250 for the last year and racing at that level?
It’s definitely a little different. The way I have to ride the bike is a lot different. I got so used to riding the 450. I’ve gotten some really good things that I’ve learned from riding this 450, and then some things that don’t necessarily transition over so good on the 250. Your racing lines have to be quite a bit different on the 250 or the 450. In the beginning of the year I just kind of struggled with that, trying to rush everything and trying to go from point A to point B the quickest. On the 250 you got to remember to round your turns and carry momentum. It was something I thought I was starting to get there. After this break I was excited to go racing, but it’s one of those things. I think it was just an awesome experience for me to be with the Club guys for a whole year just training and getting myself kind of back in that race shape and know that I can still kind of do it. It was pretty good. For me, the whole time I was riding the 250 I was trying to keep myself off the 450 because every time I get back on it, I love riding that so much. I don’t know what my plans are in the future, but I’m stoked to have this opportunity and get to mix it up again with some of the guys.

Any opportunity to go back to Australia?
That was the plan. I’ve been talking to the guys at CDR about coming back. Hopefully this little bump in the road doesn’t affect me in that. I think that series is going to start in October or September, something like that. So I should have plenty of time to get back up to 100 percent for that racing to start. Hopefully that all goes as normal. Hopefully we can get a series to get racing and get back underway and completely back to normal. Would be awesome. It’s always a good time going down to Australia.