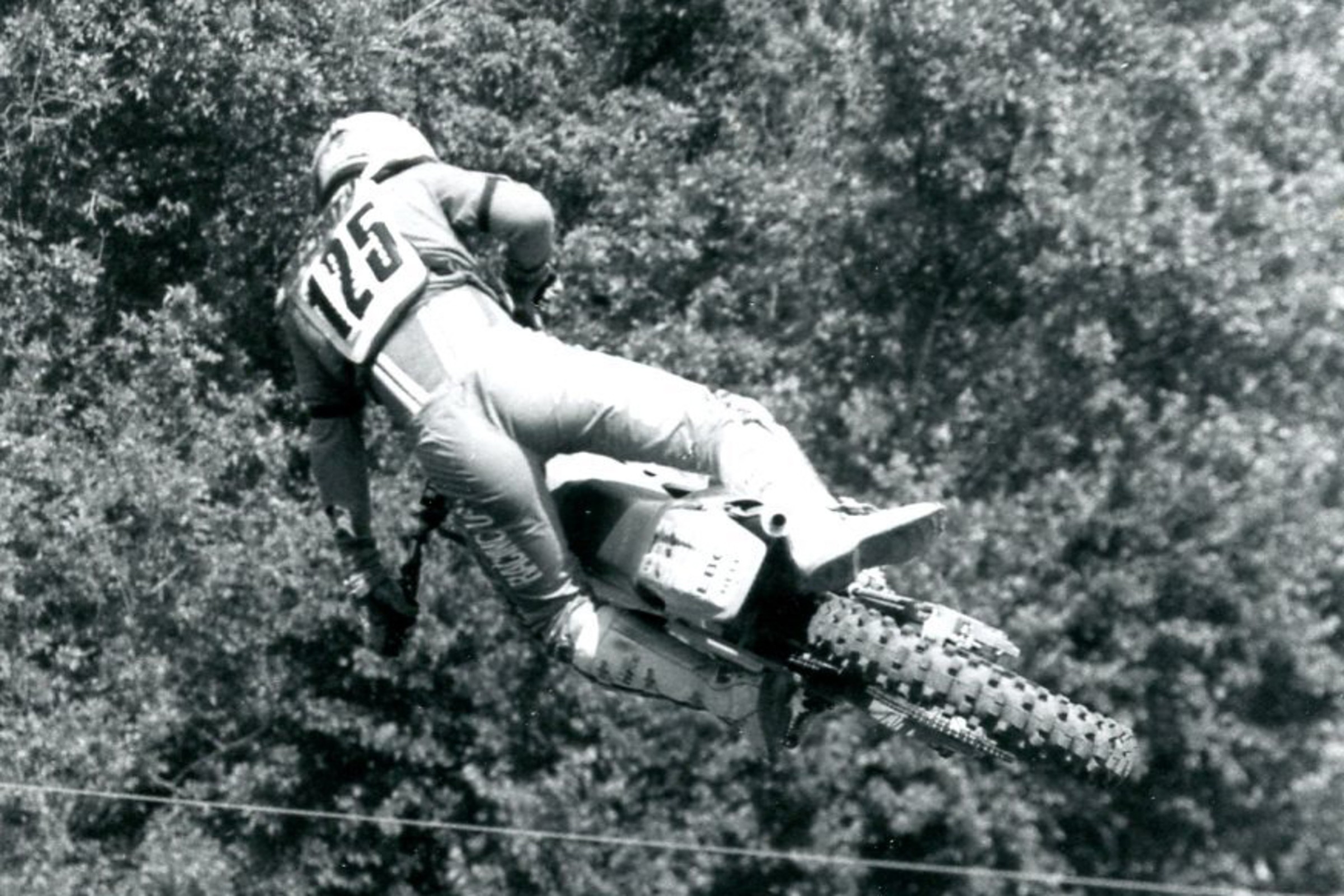 Not much going on in the sport these days to “observe” but hopefully this plan to go racing end of May works out and we’ll be back watching some real racing shortly. However, this COVID-19 thing hasn’t been all bad, it’s allowed a lot of us in the industry some time to breathe, work on some new projects and maybe take a fresh look at the sport. Here at Racer X, we’re lucky that we have Davey Coombs around the office to run any old school question we may have by him.

Myself, I’ve been perusing the old Cycle News Archives and loving it. It’s absolutely the best five bucks you could spend in a year. I’ve followed this sport closely my entire life, but there are still things that I learn every time I dive in there. So, so many things I’m amazed about from reading the old race reports, In the Wind, and so on.

Here are some random “Observations” from random Cycle News in the ‘80s and ‘90s featuring things I didn’t know, just realized, forgot about and learned again, or just blew me away. Here we go!

Okay, many remember that Micky Dymond won two 125 national titles on a Honda, was the hottest property at the end of 1987 and signed a big two-year deal with Yamaha right? Dymond had a few good rides on the white team, suffered some injuries, never really got going and was released after two years. From there what Cycle News tells me is that Dymond was supposed to race privateer Kawasakis (still wearing Answer gear) in 1990 but he never raced in supercross that year. So yeah, maybe he got hurt but I could not find anything about Mick. He does show up in some West Coast Mickey Thompson Ultracross races, though, which is random. Ultracross is part of the Mickey Thompson Stadium Off-Road Grand Prix, which puts truck and buggy races on inside stadiums, kind of like supercross. They also have a 250 class for dirt bikes, but it’s obviously not nearly as big for the industry as supercross. Well, just three years after being the hottest thing in the sport, Dymond is racing Ultracross and seemingly chasing some money races here and there. Never knew that!

It’s crazy to me that you forget that back then professional supercross and motocross took a back seat to roadracing and flat track in Cycle News most weeks. Yes, flat track was on the cover a lot with a tiny blurb about who won the SX that week on the cover. You’d have to get to page ten or something to read some small report from one SX round. The AMA Roadracing series was huge, MotoGP was (and remains) massive, Flat Track was a WAY bigger deal and heck, sometimes desert racing would get better billing than SX. That would never happen now folks but it did back then. Really shows you how this sport has evolved and grown.

In the 1989 issues, you’ll find some kid with #125 on a Honda wearing High Point gear named Jeremy McGrath. He’s borderline main event guy, he races more than a few of those Ultracrosses also against stars like Jim Holley, Dymond, Tyson Vohland. He seems pretty good. Whatever happened to him?

Let’s stay with the Ultracross thing, there’s a story where the champion, Jim Holley, gets banned from the series at the last round in, I think, 1990. According to the story, it starts with Jim arguing with the referee as he tried to get the “Kawasaki guys” to stop cutting the track. Apparently Jim and the ref got into it and he got the boot. This would be a big scandal for sure in 2020, the champion banned from ever racing the series again the following year. However, Holley is quoted in the story as saying that he spoke to the referee’s boss and that he is definitely not banned. Jim would be proven correct as he did race the series the next year. Jim also recently told me that his banning had nothing to do with getting the Kawasaki guys punished for cutting the track but it was because he kissed said ref on the cheek when they were arguing and the ref said Jim was banned for “assaulting a ref” or something. I can’t even imagine how big a deal something like this would be in the days of the internet and social media. I don’t know, as always with Jim Holley, things got crazy!

There was this guy from Michigan in the mid-‘80s named Keith Bowen. Michigan people will tell you all about him. Well, after reading old reports from around then, let me be the one to tell you that he was VERY fast. Bowen was a Michigan Mafia member, a very fast amateur rider and went ride to the Yamaha factory team for four years. Bowen didn’t train a lot, he seemed to have a lot of off-track “distractions” as well but when everything lined up right, he was hauling. Bowen won two nationals and finished runner-up nine times in his career. Never won a 450SX (then 250SX) but came so close. And let me tell you when you read old Cycle News issues, he’s ALL OVER the place leading races, winning heats, etc., etc. but he just couldn’t put everything together to be a champion. The 1986 125 Nationals was probably his best chance for a title but he DNF’d a few motos and that was it. It should be noted also that every rider in the mid-‘80s that WAS NOT on a Honda had to overcome a serious deficit. Especially in the 125 Nationals, Honda could just grab a dude and dominate. If you were Bowen on a YZ125 or about a half-dozen guys on an RM125, and you were facing the factory Honda CR125, well, good luck with that. Anyways, Keith Bowen, here’s to you bro. You had some serious speed!

By the way, on the Bowen and Dymond topic: back in the 1980s and 1990s, you didn’t have strong satellite-type teams to provide a lifeline for good riders. You’d get your crack at a factory team, and if you didn’t win a title, you were dumped into the privateer ranks, and in general your window was closed. With today’s 250F teams run as satellite operations, there are a lot more rides available in that class, and in the 450SX class, you have teams like Rocky Mountain ATV/MC-KTM-WPS and SmarTop/Bullfrog Spas/MotoConcepts Honda dishing out good bikes and support. There were tons of guys like Bowen and Dymond that could have really used a spot like that.

Here’s another crazy thing I learned. It was no problem, no issue whatsoever for the biggest names in the sport racing the California Golden States or Florida Winter Series before supercross started. Like, in 1990, pretty much ALL the factory guys raced Perris ONE WEEK BEFORE ANAHEIM 1. Let that soak in for a bit there and compare it to the guys now. Can you imagine Tomac/Roczen/Webb/Anderson/AC etc. just showing up a racing a local race in California the weekend before Anaheim?

Damon Bradshaw was probably the hottest rider in the sport at the time. He raced probably four or five times before the first supercross in 1990. He raced some of the Florida series then flew across the country to SoCal to race there. Yes, times were indeed pretty different back then.

I always thought that Rick Johnson didn’t do much in 1990 after he broke his wrist in 1989. Remember RJ was the man in 1989 and would’ve probably won everything that year as a 25-year-old. He won the first five supercross races that year, and there was lots of time for him to keep winning before it was ripped away from him with injury. But in 1990 he had just come off his best finish in Atlanta before breaking fingers in Daytona and missing some races. Reading the old CN issues, he seemed like he wasn’t getting starts but was working up the pack a lot in those early season races to get good results. After his best finish in SX of the year in Atlanta, he then won the first 250MX National of the year at Gatorback, but then came Daytona and another injury. So, RJ was definitely trending upward in 1990, better than I remembered, before he got hurt again. Back then, it was just some news inside a weekly edition of America’s Motorcycle Newspaper. If this were happening now, we’d be discussing the crap out of RJ’s status every week on podcasts and shows. I, personally, am sick of talking about Ken Roczen’s old injuries, and I think Kenny is as well. RJ probably barely got the chance to discuss any of this with anyone back then!