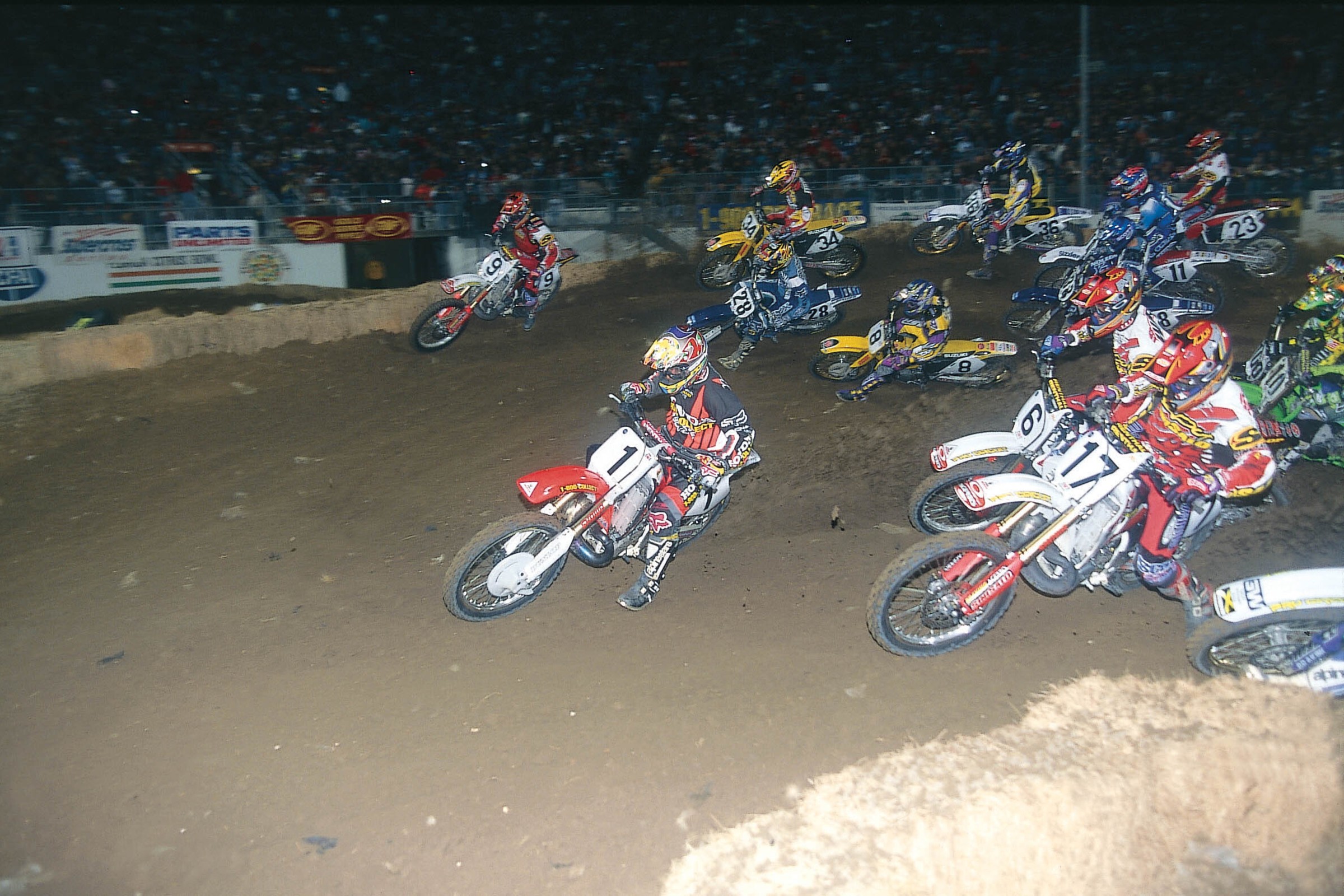 The 1996 AMA Supercross series is remembered for a lot of things—among them, Honda’s Jeremy McGrath ripping off 13 straight wins to start the year, and then Kawasaki’s Jeff Emig stopping the streak with a win at the penultimate round in St. Louis. Fewer people remember that there was one more race after the streak ended, and it took place for the first and last time in Denver, Colorado.

The air let out of the series when the streak ended, McGrath having clinched yet another title weeks prior. The series rolled into the Denver Broncos’ Mile High Stadium with a track that went around the football field, akin to the old L.A. Coliseum races.

The streak being over, bikes were at altitude, and there was some apathy in the air. (Trust me—I was there.) It was a bit of a snoozer, and although Cycle News stated there were over 30,000 people there, it sure felt like less.

Pissed off at his streak ending the week before, McGrath left no doubt that he could’ve started another one right away, as he holeshot the main event, had four seconds on everyone after lap one, and took off for the win, his 14th of the year. We did an online story about that ’96 season, and Jeremy, when asked about that last race, told us he made sure no one got any ideas about beating him again.

“Every race I lost, usually the next race I’d beat them by double,” he said. “Denver … you’ve got to remember, my CR250 at that time was probably way better. We were at altitude. I remember that night starting in first gear and getting a huge holeshot, where everyone else was still trying to start in second gear. That was another race where I was jumping a section that nobody else could jump. So that night was a good night for the bike because we had so much power.”

A distant second was Suzuki’s Ezra Lusk, and third was Emig, who said in Cycle News that he didn’t know the race was winding down, otherwise he would’ve charged up on Lusk earlier.

In the 125 class, Yamaha’s Kevin Windham needed to finish 14th or better to clinch the West Region title, and just to leave no doubt, K-Dub grabbed the lead from Pro Circuit Kawasaki’s Casey Johnson early and took off with the win. Suzuki’s James Dobb had a frustrating night but did manage to finish second in the series.

“It’s been a long, up-and-down year,” Windham said after the race, alluding to breaking his collarbone at the beginning of the series. “I’m glad to get that first championship under my belt. This is really unbelievable. This is something you dream about and live for. It’s the greatest feeling in the world.”

This race was also representative of something else: it was the last race of the series before the people from Pace Motorsports took more control of the series, and things started to head upward from that point. Prior to this season, supercross was run by several different promoters each producing several rounds within the season. Pace was eventually able to consolidate all the races under one umbrella, and changes quickly set supercross on a path of big growth.

In ’96, I remember attending an awards banquet after the race on a flatbed trailer where the riders collected their series-ending purse money. By the next year, there was a much flashier awards banquet in Las Vegas. The issues with the lights going out in Las Vegas the previous year (which added to a growing feeling of rider discontent) seemed to fade by 1997, so Denver represented a bit of a turning point in the sport.

After that one Denver race in 1996, supercross would not return for more than twenty years, with last year’s running of Monster Energy Supercross at what is now called Empower Field at Mile High (the old Mile High Stadium was imploded in 2002). The crowd was a lot bigger than it was in ’96.