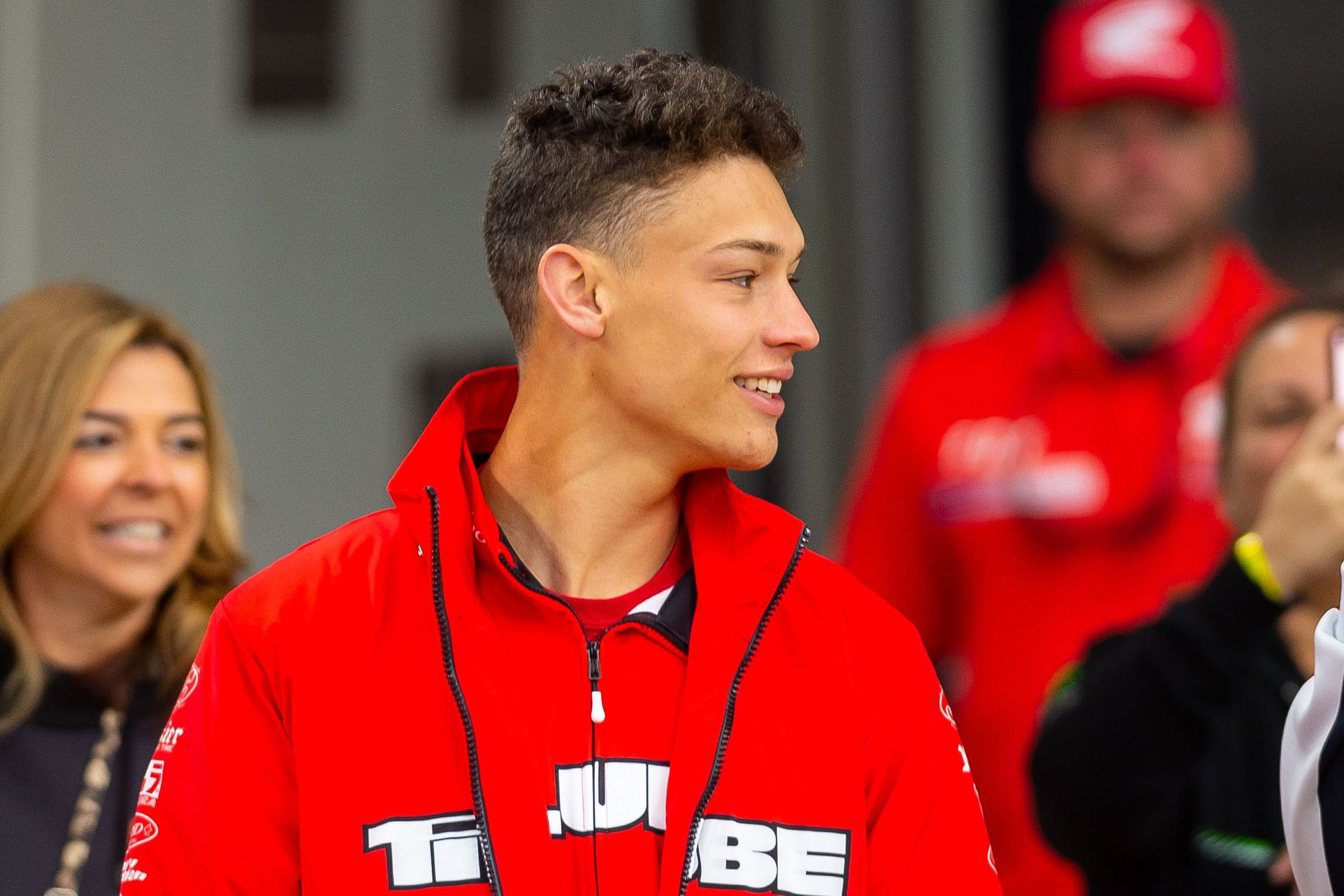 With racing at a standstill, the next tentative milestone for most of the sport’s athletes comes in June, when Lucas Oil AMA Pro Motocross Championship is scheduled to get underway. But what about for those riders who are supercross only, like the TiLube Honda Racing team? There’s only so much training that can be done, and even riding has been abbreviated in order to minimize the risk of ending up inside a hospital during these infectious times. On top of all that, just about all everyday activities are under serious restriction. To get a better idea of supercross only life is like we dialed up Jordan Bailey, who, not surprisingly, was available to chat.

Racer X: Jordan, what’s up? What have you been up to since Daytona?
Jordan Bailey: Well, I stayed riding obviously for a few weeks after Daytona, not knowing exactly what was going to happen. But in the last couple weeks I’ve  only ridden here and there. Where I live in Orlando, the whole state of Florida is in lockdown, so I’m up here in Georgia at the Millsaps Training Facility [MTF]. The TiLube Honda team is supercross only, so as of right now I don’t have any plans to race in the summer. So the riding has just been here and there just to stay in riding shape. Really I’ve just been hanging out, working out, golfing, and trying not to get sick.

Some guys aren’t really riding just because they don’t want to risk breaking a bone and having to be in the hospital while this whole Corona thing is going on. Has that deterred you from riding at all?
I’ve definitely heard that, and it is something I for sure think about, but obviously we do a dangerous sport and getting hurt is never good. Here in Georgia, we’re in a small town and we don’t have as many cases here so I don’t have to be as worried as if I were in Orlando. But it’s definitely something I’ve thought about. This is really not a good time to be in need of medical attention.

What’s the team situation? Have operations completely ceased because of the pandemic?
Right now we’re on hold, as far as what the plan is. Word is hopefully we’ll be back in September to race supercross. Not being an outdoor team, we’re able to do things we’d do in the off-season, whether it’s personal stuff, or day-to-day things. I’m sure within the next few weeks we’ll get back into testing to get ready for supercross. Things haven’t completely stopped, but we’re off the grind right now.

What’s the situation like at MTF?
They’re able to stay open, but the situation is really limited with social distancing and the groups the kids are riding in. Everything is really moderate compared to normal. They’re doing everything they can to stay open and stay within the guidelines the government has given us. Until Georgia puts a lockdown on everything, I think we’ll be okay. It’s a tough time for a lot of people. We had a lot of European kids here and they all went home.

You said you didn’t have any plans to race any nationals, but if things go to plan, all those guys will be sharp coming back into supercross after racing all summer. Have you thought of doing any nationals here and there to keep your edge? Of course there’s a balance to that too, though, because if you get hurt in the summer you could miss supercross.
I knew going into the season we were a supercross only team, and I wasn’t going to be concerned about it until supercross was over. Now that it’s happened a lot sooner, there are definitely benefits to racing and benefits to not racing outdoors. I’d love to race outdoors, for sure, if there was a good opportunity, but my main goal is to be ready for supercross when it starts. TiLube Honda is my team and we’re devoted to supercross. If a spot opens up for me for outdoors, we’ll see, but either way we’re going to be ready for supercross no matter what.

A lot of these guys, especially privateers, aren’t able to make any money right now. Do you think this whole situation is going to see people transition completely out of racing?
Normal life, as far as work? Yeah, I think so, absolutely. With this time you’re just trying to figure out things to do, and as far as pay, as many people know, the pay isn’t anything to be stoked about. On the privateer level we’re strictly dependent on racing. Financially, the season is longer now, which is tougher. I think we will see a drop. Not just in privateers, but with amateurs too if things don’t get back to normal soon. Parents can’t afford for their kids to practice all year but never really race. And if you don’t have races to prove yourself, who knows who gets sponsorship rides and things like that? It could affect the entire sport.

It makes you stop and realize how fragile it all is, how interdependent we all are. Then it all just comes to a halt.
Yeah, and it came to a halt very quickly. It was Thursday night before Detroit and Martin Davalos, who I train with, called me and was like, “Hey dude, the race is cancelled.” I was like, “What?” We all had five o’clock flights in the morning to Detroit, and it was like six in the evening Thursday. I hadn’t heard a single thing, I thought he was joking. I called Buddy Brooks, my team owner, and he hadn’t heard anything. Finally I got the word at like nine that things were cancelled for the foreseeable future. I wasn’t too stressed, I thought it was going to be a couple weeks. Then everything just shut down, and here we are now. It was so abrupt nobody could even prepare for it. We saw around the world that this virus was getting worse, then all of a sudden everything, not just us, everything, came to a stop.

How bored have you been?
Oh, boredom, it’s gone past that. I was talking to some friends the other day and I was telling them sometimes I just sleep during the day to pass the time. It’s gotten to that point. I’m not actually tired, just literally sleeping to pass the time. I stay in the gym too, and I ride here and there also. Luckily the golf courses are still open. I think I spend probably ten hours a day at golf courses—I have nothing else to do. Other than golf and training off the bike as much as I can, there’s really nothing I can do. Maybe video games. It’s been tough for sure.

Walking?
Walking. I went home to Orlando to see my family and everything. I rarely ever do it other than to let the dog out or something, but I was so bored I just went and walked my neighborhood. I was like, “This is bad. We really need to get going again. This is bad.”

You need to film yourself walking and send it to Weege [Jason Weigandt] for those “Weege Calls Anything” videos he does.
[Laughs] Yeah, I need to get on that!

What else is there to talk about? What’d we miss? There isn’t much right now is there?
Yeah, it’s a tough period. I was talking to some people and for social media people and media people, this is the hardest thing right now with our sport. It’s not like we’re in the NFL and trades are happening and that kind of thing. Our sport is at a complete standstill, every rider is on the same team, and there isn’t anything changing anywhere. This is literally, for us, brutal.

You’re right about that. Well thank you for your time, and we’ll see you in the fall.
See ya.