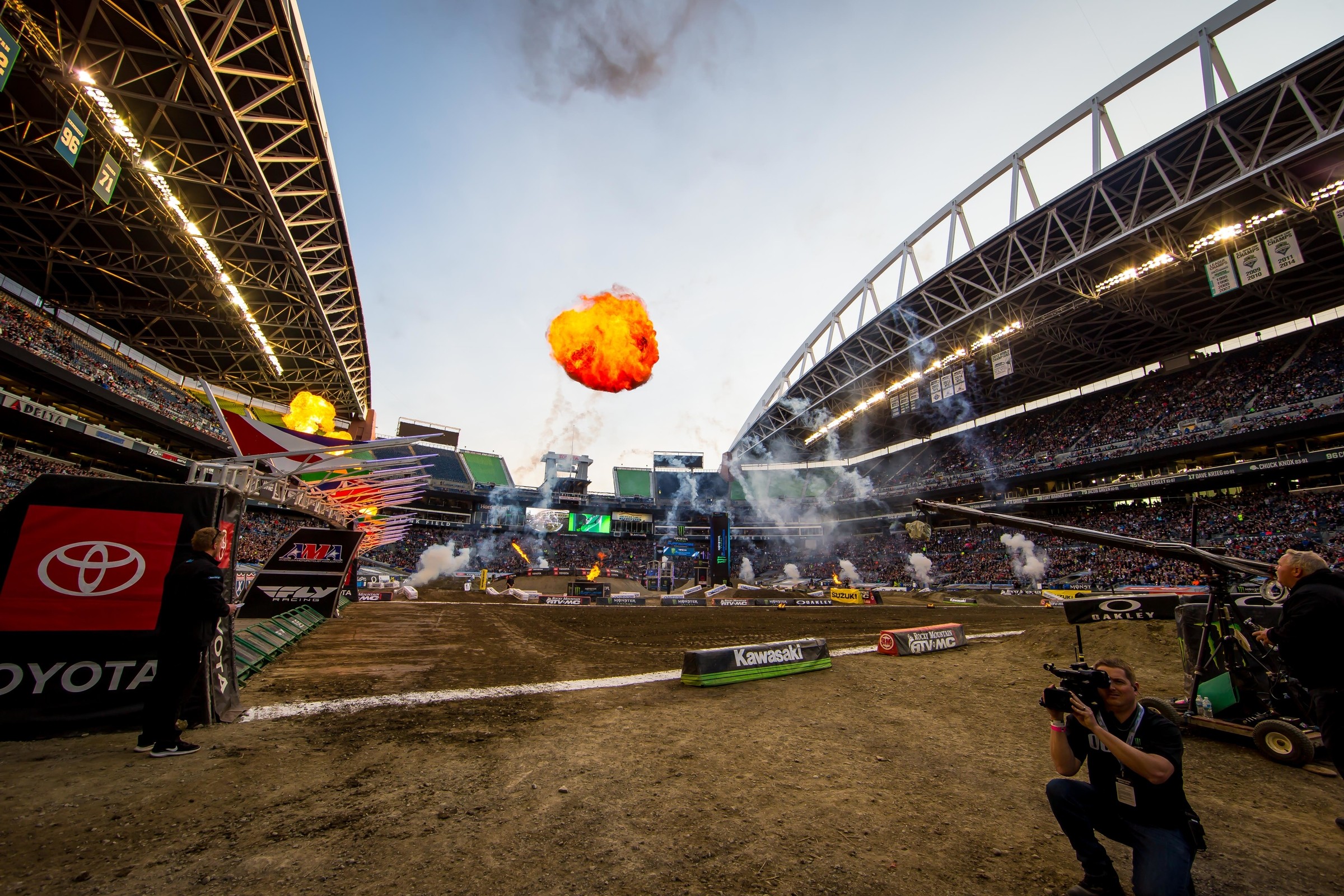 The 2020 season of Monster Energy AMA Supercross is postponed for now, but Racer X Online is here to provide your racing fix anyway. Each week, we’ll dig into some favorite races from each city’s supercross past. We’ll provide perspective and analysis as to what racing was like then, and what the key players went on to do in the present day.

With the Seattle Supercross canceled, we’re keying in on some of the best SEATTLE Supercrosses from yesteryear. There were several good races that come to mind when thinking of supercrosses in Seattle, Washington, so we're going to note a few of them below.

Just like we did last week, we’ll run through some classic races that we found on YouTube. Look for more analysis on these races in the next few days.

This is the second night of the Seattle ’86 race, part of a long line of Ricky Johnson versus Jeff Ward battles through the latter portion of the decade. This time Johnson gets a good start and jets away early, while Ward is left trying to play catch up. Johnson stalls at one point while leading.

Johnson’s other primary rival in ’86, David Bailey, gets a bad start and is never really even seen. Johnson cuts a podium interview that’s far more unfiltered than anything you’d see in today’s social media era. “He had no prayer, he wasn’t even in sight,” said RJ of Ward.

What’s also hilarious is Johnson trying to wear two hats at one time on the podium. He will be better prepared next year.

A classic Johnson and Ward duel. Wardy leads for a while but Johnson starts jumping a huge (by 1987 standards) triple, just sending it to the delight of the Seattle fans. Meanwhile, Bob Hannah, completely ancient by the standards of the day, is racing in his final supercross, and still goes like an absolute madman coming through the pack. Once “The Hurricane” gets going, he literally starts passing two and three riders at one time! Even in his twilight years, Hannah was still crazy fast and fun to watch.

Later, RJ heads to the podium and shows much improved hat game from a year prior. Hannah joins him as the two champions show each other respect.

Perhaps the most memorable Seattle Supercross ever, as hometown hero Larry Ward makes a run for the lead against Jeff Matiasevich. This race takes place during the height of the early 1990s block pass wars, with Matiasevich and Damon Bradshaw the primary instigators of that type of riding. When Ward goes for the lead, Matiasevich battles back, with block passes and brake checks. That only fired up the partisan Seattle fans even more!

Later in the race, Ron Tichenor knocks Jean-Michel Bayle down while battling for third. This was just part of the game back then!

This race holds little significance of championship value as by the time the Seattle round had come in the 1994 season, Jeremy McGrath had all but wrapped up his second supercross title. The rocky Pacific Northwest soil does create some drama though with a slew of flat tires during the main event. Even race leader McGrath picks up one late in the race as he tries to hold on for victory.

It was surprising when Larry Ward took his first career victory in Seattle in 1990. It was equally surprising when he won the race for a second time, nine years later! Nine!

Coming to the close of one of the most dramatic championship seasons in history, Chad Reed falls in the first turn, but title rival James Stewart has problems of his own three corners in. With both riders well back in the field, it puts childhood rivals Mike Alessi and Ryan Villopoto out front to battle for their first career wins. All eyes are on Stewart and Reed riding through the field, however.