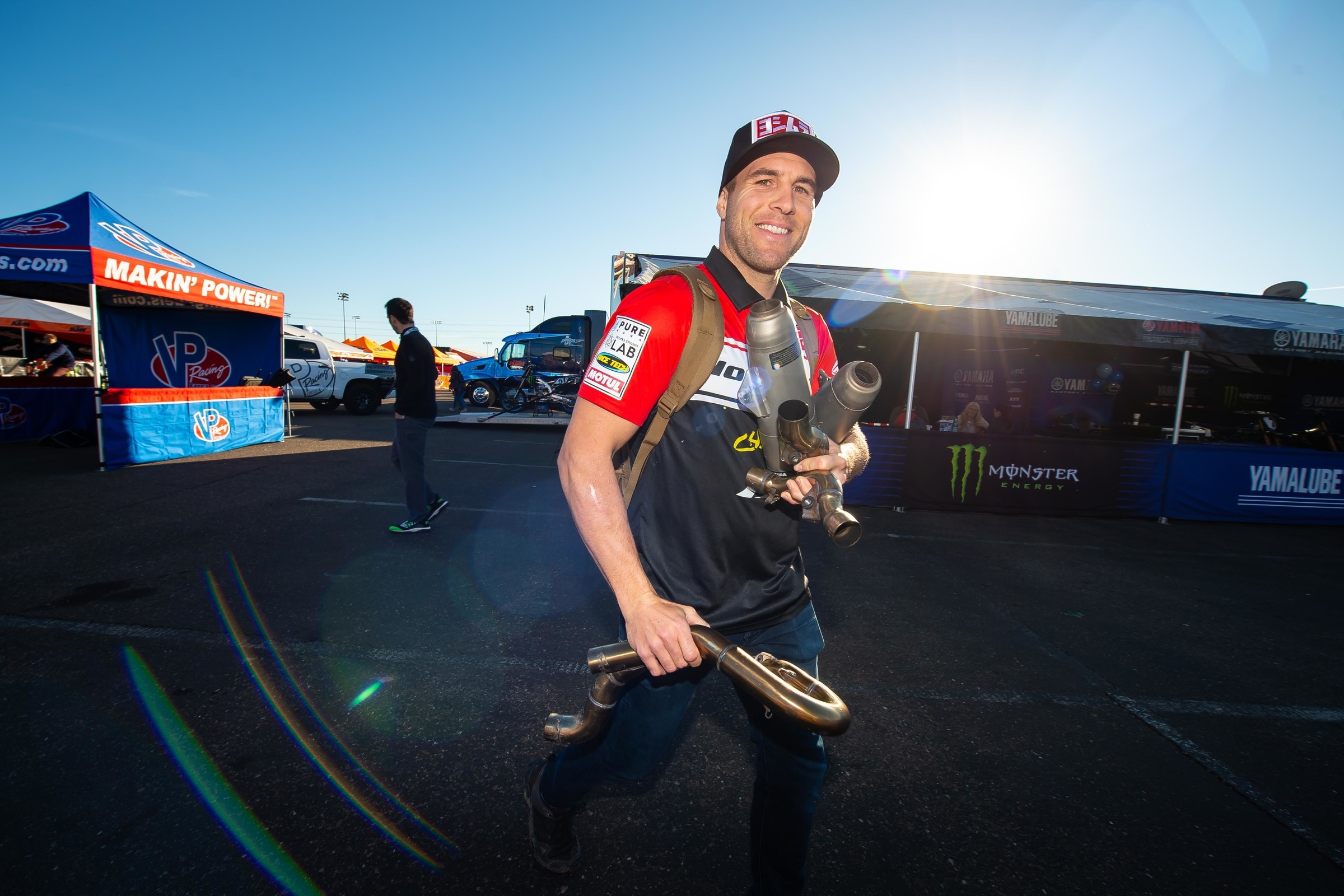 Comment: Anstie has been inactive all season after having surgery to fix an ankle problem around Christmas time. His team, HEP Motorsports Suzuki, says he’ll be back on the bike in roughly two weeks and should be ready for the Lucas Oil AMA Pro Motocross Championship.

Comment: Blose crashed hard in the whoops in Glendale and suffered a concussion, fractured right hip, broken right radius, dislocated wrist, broken left ribs, and a lacerated liver. He was working toward being back for the final two rounds before racing operations temporarily ceased.

Comment: A big concussion in Glendale put Bogle out of action. Before the COVID-19 outbreak occurred and postponed the supercross championship, Bogle wasn’t slated to return to supercross.

Comment: Brayton left Daytona with a broken hand thanks to a last-lap run-in with Vince Friese. Honda HRC told us his hand is healing up nicely and he’s got roughly two weeks before he can start riding again.

Comment: Cianciarulo broke his collarbone during qualifying in Arlington and hasn’t raced since. He’s back on the bike and ready for the next gate drop and told our Steve Matthes: “I still feel physically better than I did before I had the little injury” earlier this week.

Check out the podcast Matthes recently did with AC:

Comment: Cunningham has yet to get back on the bike after suffering an AC separation in Atlanta. He’s been using the downtime to work on cardio training and should be back riding in about two weeks. His team says he’ll be ready for the Lucas Oil AMA Pro Motocross Championship.

Comment: LaMay was shooting for a return in Detroit after injuring his thumb on press day in Arlington. He’ll be ready to go whenever racing resumes.

Comment: Martin is working on recovering after a serious crash in St. Louis resulted in a torn ACL, a torn patella tendon, a broken big toe, and two broken metatarsals.

Comment: The 2020 season of Monster Energy Supercross was a wash before it even started for Marvin Musquin, who never raced due to a knee injury. He’s working toward a return, and if you want to see what he looks like on an exercise bike in nothing more than a pair of shorts, heart rate monitor and a mustache, look no further:

Today I’ll be sharing with you on my story what a confinement day looks like in the Musquin’s house ✌???? Secret to stay sane ? Get your workout in ! #StayHome #WeCanDoThisTogether

Comment: Noren was taken out of action when he injured his leg in St. Louis. He’d hoped to be riding in April, so expect him to be ready for the Lucas Oil AMA Pro Motocross Championship.

Comment: Osborne was shooting for a return at Hangtown after he broke a rib, bruised two lungs, broke his wrist, and broke five vertebrae while practicing. With Hangtown canceled, expect Osborne to suit up for the season opener in Florida.

Comment: Savatgy, who hasn’t raced this season due to a broken heel suffered in Australia in the fall, was recently cleared to start training again, but as of now there is no timetable on his return.

Comment: Tickle recently posted on Instagram that his hand, which he broke in Arlington, is “healing well and looking forward to getting back to racing whenever it’s time.”

Comment: Alves was planning on racing Daytona after recovering from wrist surgery but ended up tweaking his knee pretty badly. A return date is unsure, but he’s apparently been passing the time posting funny videos on Instagram.

I’ve been seeing many people do these push up challenges these past couple days. You guys need to step it up! I nominate all you guys to do the NO HANDS PUSH-UP! ???????? #QuarantineDayIdk

Comment: Crown has been out of action since breaking his collarbone in Atlanta during press day. He’s back on the bike and ready to go when racing resumes.

Comment: Gaines is currently out after breaking his hand in Daytona in what was one of the wildest wrecks of the season.

Comment: Lawrence is back on the bike and should be ready to go when racing resumes. For a look at Lawrence in action check out this video of him and his brother at Glen Helen.

Comment: Moreau sustained serious injury during practice in Tampa. He’s now back in France doing what he can after being dealt a horrible blow. To help him and his family out financially go to Road2Recovery.com.

Comment: Nichols is back riding after dislocating his shoulder in October and should be ready to roll when racing resumes. If you’ve ever wondered what his dog looks like, and really, who hasn’t, check out his Instagram.

Comment: Peters crashed during qualifying in Arlington and suffered a broken triquetrum in his hand. He soldiered through to wrap up the AMA Kicker Arenacross championship a week later, and is now on the mend.

Comment: Robin crashed in Daytona and broke a bone in his hand. He had a plate installed but even before the COVID-19 outbreak he wasn’t expected to return before the end of supercross.

Comment: Shaw sustained a deep bruise on his right rotator cuff in Arlington. He tried to race in Daytona but discovered he wasn’t quite ready yet. He’s been recovering since the season was suspended.

Blood, sweat, & tears! I put all that I am into Who I am, and this Sport, I love it with all my heart! I have a great team/crew around me! I just have been dealing with a deep bruise on my right rotator cuff since Dallas. So I’ve been rehabbing and doing all that I can to be at the races, so I gave it a go this weekend in Daytona. But I just couldn’t hang on like I needed to. So my team & I have decided to take some time off! To be competitive and get the results that I work for I just need some time! I WILL BE BACK SOON⚡️ Thank you for all the love , Sincerely 124????????????: @jasonmichaelwatkins #teamnoquit #blessed #comingbackstronger #jkoptribe #iridewithdockside #nbd #team124

Comment: Smith crashed in Daytona and tore his ACL. He and the team decided the best option was for him to undergo surgery, which means he probably won’t be back for any nationals in 2020. He posted this update post-surgery on Instagram recently:

INJURY UPDATE! Man the first few days after ACL surgery are really rough! Hopefully everything keeps getting better from here on out and we will be able to be back at the races ASAP! Thanks @katiewoodard_ for taking care of me and also the Medlin’s @lee_medlin_realtor @the_cmed @courtneyymedlin for letting us recover and quarantine in their house! If you have any questions on the recovery process comment them down below and I will try to respond to a few! @racekawasaki @pcraceteam

Comment: Teasdale tore his MCL during qualifying in Arlington and is out for the immediate future.

Comment: Thompson suffered a mid-foot break and ligament damage to his left foot in a crash at the start of his heat race in Daytona. He was scheduled to get surgery last week and is expected to miss between eight to ten weeks.

Comment: Craig is back riding and is ready to go after fracturing bones in his hand and finger in Glendale.

Comment: Lawrence is back on the bike and is ready to race when racing resumes. GEICO Honda recently released a video of the Lawrence brothers riding at Glen Helen.

Comment: Oldenburg suffered a partial tear in his ACL and tore his meniscus while practicing. When we checked in with him, he told us his knee is doing great and that he’s been riding a lot. His team is supercross only so he won’t be at the nationals, but if supercross resumes he’ll be ready.

Comment: Osby suffered a torn ACL before the season and never got a chance to race any supercross.

Comment: Schock has been dealing with a broken radius bone in each arm this season. He’s back on the bike and is ready to go when racing resumes. He’s also been bringing the heat to his Instagram followers: