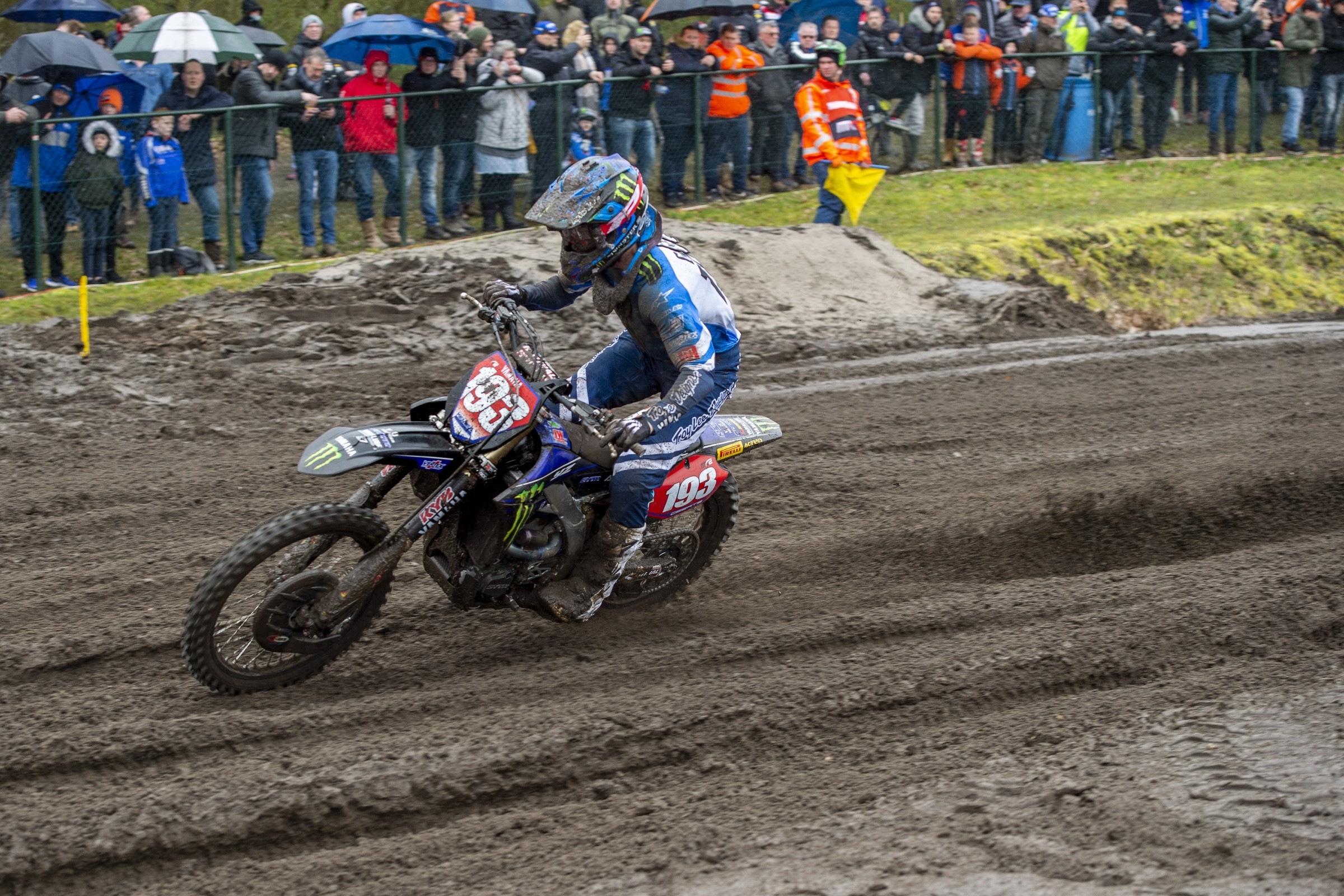 Way back in 1957, Rene Baeten of Herlentals, Belgium, won the second FIM 500cc Motocross World Championship. Sixty-three years and 52 FIM Motocross World Championships later, the rather small nation of Belgium (just 11 million people) is the greatest in the history of Grand Prix motocross. Belgium, however, has not produced a world champion since 2008, as the closing of tracks due to noise and environmental concerns has stunted the sport’s growth.

But on the first day of March at Matterley Basin in Great Britain, 19-year-old Jago Geerts (pronounced YAH-go GURTS) won the MX2 overall to take the early points lead in MXGP’s 250cc class. A week later in cold, wet, sandy Valkenswaard, the Netherlands, Geerts raced to third at the MXGP of the Netherlands. Then the whole season was frozen in place. Like the rest of us, Geerts is at home, in lockdown, wondering what to do with himself. Today, with a little help from Jago’s manager, Stefan Geukens, we rang up the Belgian to see what he has going on.

Racer X: Jago, how are you and what are you up to during your lockdown in Belgium?
Jago Geerts: I’m also pretty bored at the moment. I can’t do much physical training because I have two weeks of rest on my schedule. We have been working in the garden of my grandpa for a couple of days now. Now I can feel that we have a good life as professional motocross riders. Every day, we go out and walk the dog, and most of the days I am the one cooking the food. As far as being on the motorcycle, I rode my bike two times the week after Valkenswaard, but then it became worse with the COVID-19 virus, so we decided with the team that it was best to stop riding for a while. I have been doing some cycling and running to keep myself busy. I don’t like to stop completely with training when I have rest, so I keep training a little bit. It is more about having fun than really training.

Have you been in close communication with the Monster Energy Yamaha Factory MX2 team, and have you guys been able to plan anything at all in advance?
Yes, my team is also following the situation with the COVID-19 virus closely. So, we already made a plan together for the next weeks.

You came out swinging at Matterley Basin, and you backed that up with an opening-moto win in Holland. Looks like you guys really came in prepared.
Yes, I was feeling very good on the bike at the start of the season. We made a big step with the bike during the winter break. I also made a small step both physically and riding-wise. So, the whole package is better than last season. Yes, Matterley Basin was a weird race for everyone, I think. We had only one practice session on Saturday because of the bad weather, so it was difficult to adapt to the track. But I felt good on Sunday. The first race, I didn’t have the best start, but I passed a lot of riders in the first laps, and after 15 minutes I was in second place. The leader crashed, and suddenly I was in the lead and I won the first moto of the year. The second heat I got the holeshot, and the second lap I was battling for the lead and crashed pretty hard. I rejoined the race in tenth place, I think, and came back to fourth, which was enough for the overall win. I was happy with a win in the first round—I didn’t expect that.

The second race at Valkenswaard is only 30 minutes from home, so a lot of fans and friends came to support me. I won the first heat after a late pass for the lead with four laps to go. The second heat, my start was very good, but I crashed hard in the second corner. I restarted in last place and the leader almost lapped me. I rode consistent lap times and felt good on the track. I finished in seventh place, and I was happy about that because I was so far behind on the first lap, and this result was enough for my second podium of the year. So the start of the season was good, and I hope to do the same when the season restarts again.

I know you guys only got two rounds, but how do you size up your competition?
That’s a difficult question for me. I just want to focus on myself, so I don’t look too much at my competitors. I ride the best when I focus on myself, and I don’t know how my competitors deal with that. According to the updated calendar, the season will start again on June 7 in Russia. Nobody knows how the situation will evolve with the COVID-19 virus, so we will need to wait and see. I hope we can start again in Russia, because otherwise the season will be so long that it will be difficult to stay in good shape the whole time.

A lot of people love motocross in your country. Have you sensed Belgian fans and media getting behind you?
Yes, of course. Belgium has had so many good riders and world champions in the past, but at the moment there are not so many good riders anymore. The government closed a lot of tracks—we only have around six tracks in all of Belgium. I hope that I can achieve good results the next years so that motocross gets more popular again over here. There are some good talents coming up the next years. For example, Liam Everts is riding very good, so I hope we can make motocross more popular again. Also, now I start to get some media attention from the Belgian media. My manager, Stefan Geukens, is doing a good job with that. He knows a lot of journalists and media companies, so it is going in the right direction. It is important to get motocross in the news as much as possible to get it more popular again.

Do you know Stefan Everts? That guy was a pretty good racer in his day!
Yes, he still is the most successful Belgian motocross rider ever, and arguably the best motocross rider ever. I don’t know him really well personally, but I was a fan during his career. He had such a nice riding style and was always so smooth. I think a lot of riders are jealous of his style!

You’re still very early in your career, but would you ever consider racing supercross and motocross in the USA?
I like the motocross and supercross in the USA, but it is a gamble to go from the MXGP to the AMA. The supercross is so different to normal motocross tracks, so it is difficult to adapt for us. It takes a couple of years of training because the Americans grew up with these sort of tracks. So, I would rather stay here in MXGP and try to be as successful as possible.

Good luck to you and your family, Jago, and I hope everyone gets to start racing again soon.
Yes, me too, thank you!