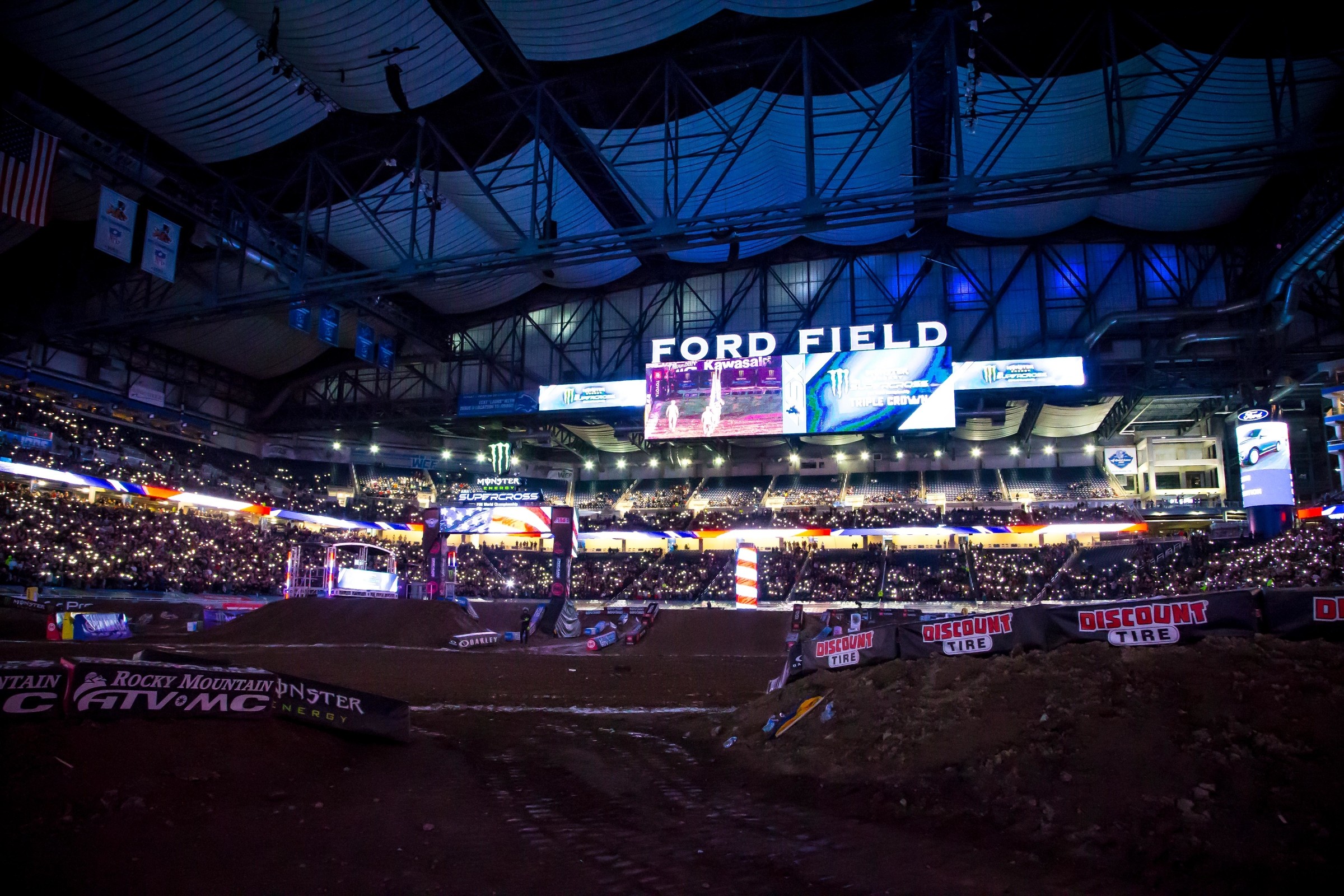 The 2020 season of Monster Energy AMA Supercross is postponed for now, but Racer X Online is here to provide your racing fix anyway. Each week, we’ll dig into some favorite races from each city’s supercross past. We’ll provide perspective and analysis as to what racing was like then, and what the key players went on to do in the present day. With the Indianapolis Supercross canceled over the weekend, we’re keying in on the pontiac/detroit Supercross this week. There were several good races that come to mind when thinking of supercrosses in Michigan, so we're going to note a few of them below.

Just like we did last week, we’ll run through some classic races that we found on YouTube. Look for more analysis on these races in the next few days.

If you want to see an example of what made Bob Hannah “The Hurricane” this video will give you an idea. By ’83, Hannah was mounting a career comeback (with Hurricane II on his butt patch) with a new ride on the ultra-trick works Honda 250. He was as aggressive and wild as ever, but had to deal with smooth, young teammates like David Bailey. This race, at the old Pontiac Silverdome, is a good contrast in styles with the precise Bailey against the all-out Hannah.

The late 1980’s were defined by the Rick Johnson/Jeff Ward rivalry, and this 1988 Pontiac race probably sums it all up better than any other race. The ever-consistent Ward leads early, but the ever-determined Johnson is charging like a mad man coming through the pack. Johnson wrestles the lead away, then crashes a few times, then the rivals battle so hard through the whoops that they collide, with one of them ending up on the ground. It’s damned good racing.

Pontiac served as the hometown race of all-time tough guy Jeff Stanton, but yet even “Six-Time” admits the nerves and pressure of the home race got to him year after year. He struggles in this race, during a year in which he won the supercross title by a large margin. Meanwhile, this was one of those “on” nights for a guy who couldn’t be beat when he was feeling it.

BUT what the highlights from the 2016 Detroit Supercross don’t show is a costly mistake that would pry the win from Ryan Dungey after he jumped on a red cross flag. In an interview with AMA Director of Supercross and Pro Racing Relations Kevin Crowther following the race, the first thing he said was that no one actually protested the incident and that the AMA officials had already began working on the penalty process as soon as the incident occurred. Dungey and the team were able to plead their case but the officials reviewed video evidence and believed there was enough footage to show the red cross flag was visibly waved to riders and Dungey had made a mistake.

At the end of the night, Dungey was penalized two positions for the incident. With his Red Bull KTM teammate Marvin Musquin going down and falling from second to third before the finish of the race, Rockstar Energy Husqvarna’s Jason Anderson crossed the finish line in second and was therefore award the win, Musquin second, and Dungey officially finishing third.

At the start of the 2018 Monster Energy AMA Supercross Championship, the rules on jumping on red cross flags were adjusted. Then a similar incident happened at the 2018 Indianapolis Supercross, when GEICO Honda’s Jeremy Martin was approaching a triple in the 250SX East/West Showdown. Martin saw the lights along the jump and rolled the standard supercross triple takeoff but doubled out, instead of rolling all three jumps like riders are supposed to in that situation. Section 4.16 of the rulebook states:

While Martin didn’t gain any positions by doubling out—which he said post-race was “an honest mistake”—he kept the win but was awarded only 19 points.

At the 2019 Seattle Supercross, after a chaotic first-lap pileup involving Chad Reed, Justin Brayton, Ryan Breece, and Kyle Chisholm, when the pack came around for the start of the second lap there was a lot of flags waiving—mostly yellow but at least one red cross flag. Marvin Musquin, leading the pack—only a few turns into the race but when they came around to the spot where the pileup happened, Musquin continued to double through the rhythm lane as the rest of the field behind him rolls each jump. Musquin was credited with the main event win but was only awarded 19 points just as Martin was the year beforehand.