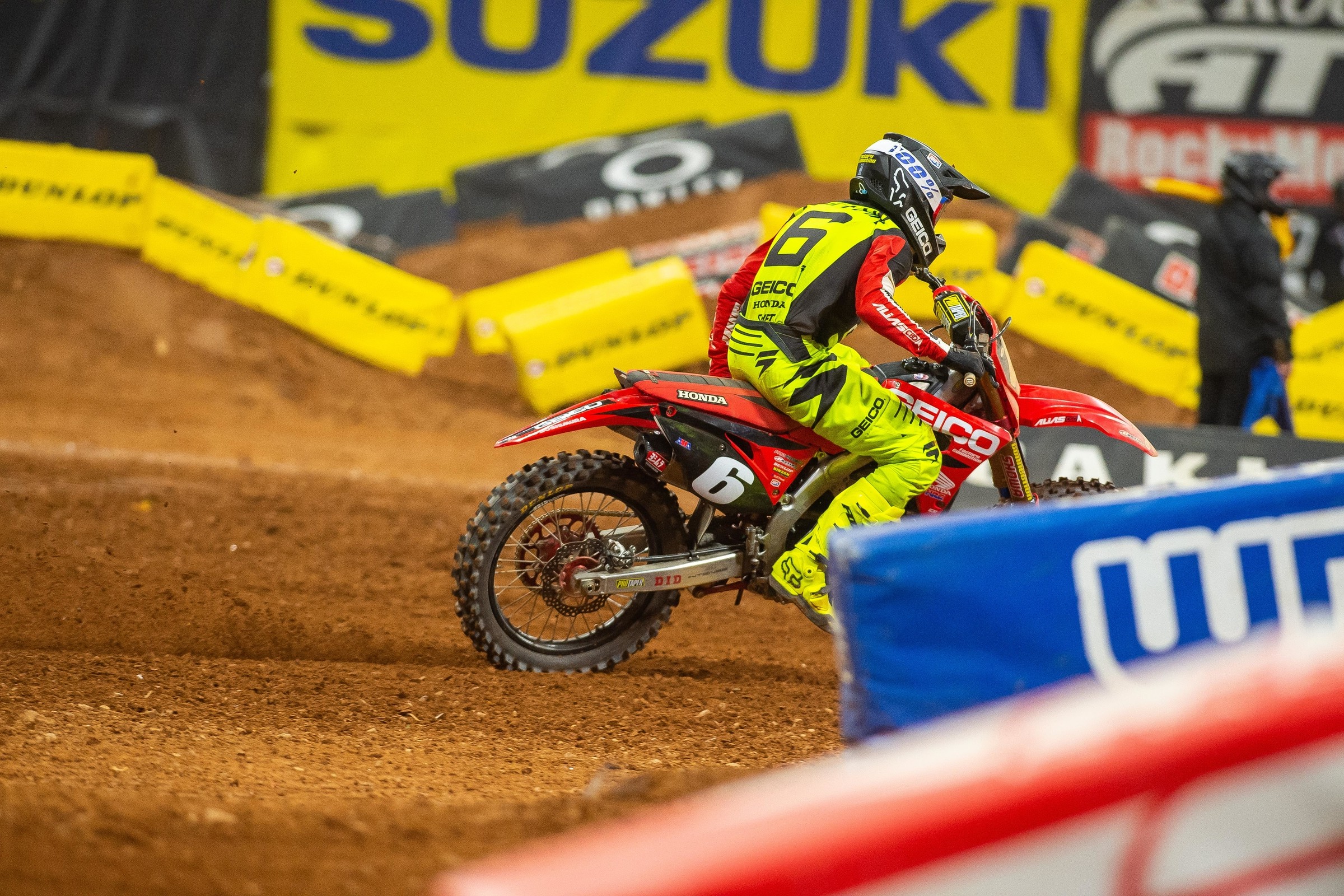 Then There Were Three

At the first two rounds it sure looked like the 250SX East Region was going to be the Shane McElrath and Chase Sexton show, but last week in Atlanta Hampshire served notice that he can be a factor too. Yeah, Sexton won by a healthy margin, but Hampshire led eight laps and finished second, which is much, much better than a distant sixth, which is where he finished at round one. Hampshire’s results are trending upward, and with a runner-up finish in Atlanta, there’s only one more spot to climb to in Daytona. –Aaron Hansel

After holding the red plate for two rounds, McElrath’s bike will be sporting black backgrounds again in Daytona, thanks to his third-place finish in Atlanta. Afterward McElrath was disappointed, and understandably so—nobody wants to lose the points lead, and after his dominant performance at the opener it was probably tough to find himself struggling (for him) just a couple weeks later. We’ll see how McElrath responds in Daytona after having the entire week to think about it. –Hansel

With Eli Tomac and Ken Roczen tied in points, the rough, outdoor-like stage of Daytona couldn’t be set with any more suspense and intrigue. Roczen is coming off what was probably his most dominant win of the season while Tomac had a tough night, crashing, and later stalling, and being forced to charge through the pack. He also blew his slight points cushion over Roczen. On the flipside, could there be a better race than Daytona for Tomac, the three-time 450 National Champion, to rebound at? Then again, Roczen has won the 450 National Championship twice himself! Who will emerge with sole possession of the red plate when the checkers fly in Daytona? –Hansel

It’s tough to understand how Martin Davalos might be feeling this week. The Team Tedder/Monster Energy Racing rider has hit the ground quite a bit in his rookie 450SX season, but those woes were far in the rear view in Atlanta, where Davalos was crushing it in second place for most of the race. Unfortunately for Davalos his podium dreams evaporated late in the race when he lost spots to Justin Barcia, Cooper Webb, and Tomac. He ended up fifth, his first top ten of the season, but man was he close to putting it on the box, which would have been incredible. After this breakthrough ride, we’ll see what he can muster in Daytona. –Hansel

When the gate drops in Daytona it will have been two weeks since Webb’s massive crash in Arlington that left him more bruised up than a ripe plumb in a rock tumbler. We know Webb has the toughness of a gorilla and the stubbornness of a mule, and in case you forgot, he reminded everyone of it with his ultra-gritty ride in Atlanta, where he took third despite immense pressure from Tomac. Afterward he was in so much pain he could barely speak in his podium interview and he even skipped to post-race press conference to get medical attention. If Webb can pull off a podium in such rough shape, how much better is he going to be with an additional week to heal up? -Hansel

Eli Tomac experienced a run-in with Justin Barcia last week before taking himself and Blake Baggett to the ground a lap later. Once Tomac crossed the line in fourth, he was immediately face-to-face with Barcia arguing over the earlier contact. Tempers were flaring and Tomac reportedly went to the Rocky Mountain ATV/MC-KTM-WPS hauler looking to apologize to Baggett only to learn that Blake was long gone. With now two parties frustrated with Tomac, look to see what happens the first time we see either Barcia or Baggett near Tomac on the track this week. There could be more drama in qualifying, the race, next week, or never, but we won’t know any of that until they hit the track this weekend. –Kellen Brauer

Jeremy Martin fell and finished 19th last week after RJ Hampshire knocked a set of Tuff Blox into his path during the main event. Martin is not only looking to get some crucial points back, but he’s also looking for his first win in nearly two years since injuring his back in 2018. Daytona has been good to the two-time 250 Pro Motocross champion in the past and the roughest supercross race of the year couldn’t come at a better time for J-Mart. Look out for a fired-up ride from the #6 machine this week. -Brauer

It took Jett Lawrence two races of his supercross career to earn a top five finish and it only took three races for GEICO Honda teammate Jo Shimoda to do the same. Lawrence’s momentum came to an abrupt halt with a broken collarbone while battling for his first career win on the last lap of his third career main event. So, what’s in store for Shimoda in just his fourth career start? It might be tough to find a way into the top group we’ve seen from the first three rounds but remember who Lawrence had to go through on the West. Look for Shimoda to keep improving this week. -Brauer

Dean Wilson was hovering on the verge of his first podium of 2020 last week when he crashed in an unavoidable circumstance late in the race. The Rockstar Energy Husqvarna rider has been quietly riding better and better every week but has suffered from lackluster starts. Flashback to 2014, Wilson qualified first in just his second ever 450SX class race at Daytona when he was filling in for Chad Reed at TwoTwo Motorsports. Look for the Scotsman to use his outdoor prowess to his advantage at the World Center of Racing to find that next step on the results sheet. -Brauer

Daytona has changed a lot in its 50-year history. Aside from the facility going through massive changes recently, the racetrack itself has gone from a near motocross event to a much more supercross type track design in recent years. This year, Ricky Carmichael drew inspiration from the Daytona Supercross of yesteryear to design a much more simplistic track with more of the natural grass used for the surface. It could mean nothing in the grand scheme of things, but riders have been more inclined to use supercross suspension settings at the recent jumpier Daytona versions. Look for some potential setup changes to softer settings as the day progresses through qualifying and into the night show. -Brauer