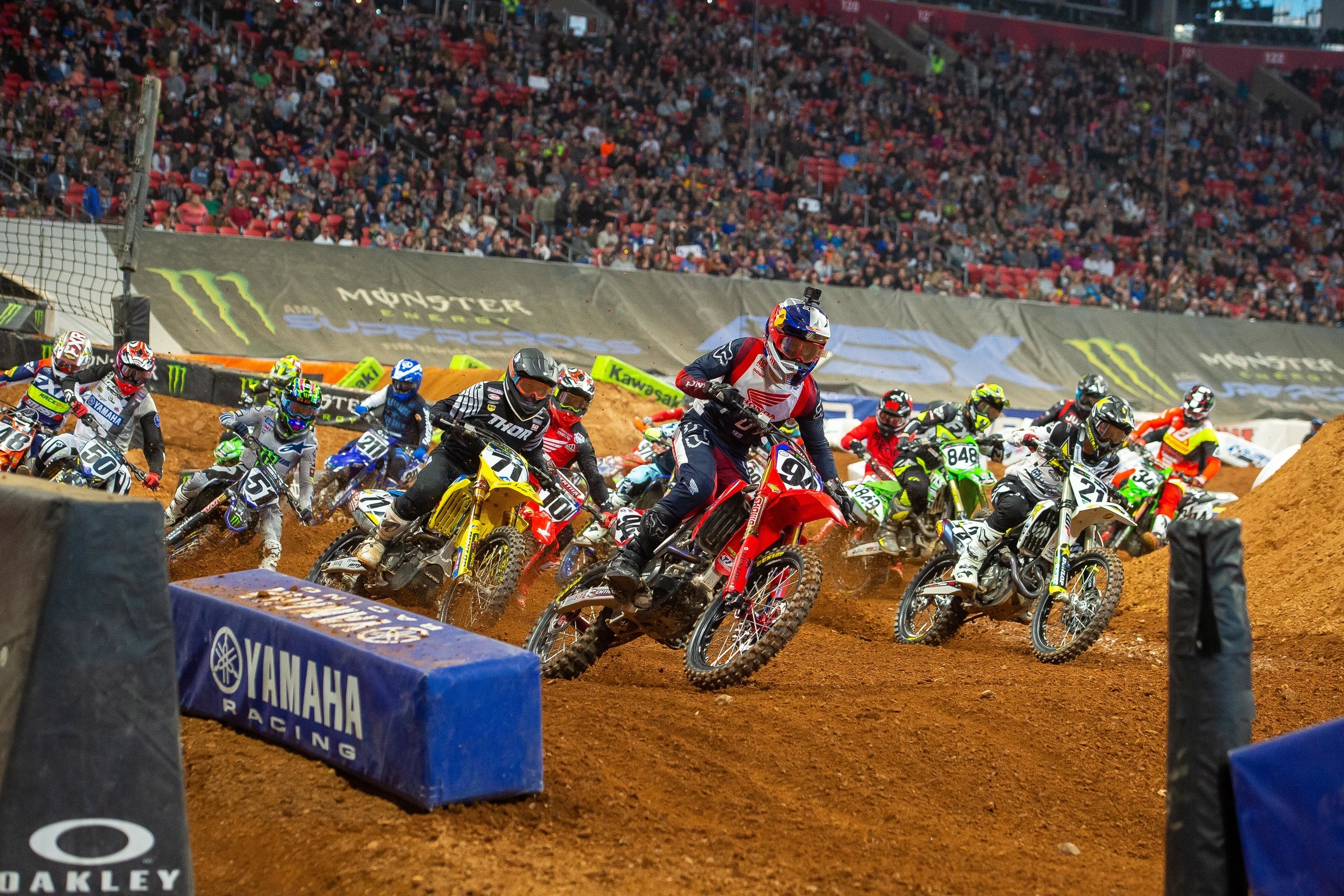 Was this track easy or hard? Track seemed easy but riders talked about a dry in spots/soft in others combo. Plus, it broke down.

It was one of those tracks where the layout was fairly easy but the conditions made it much more difficult. The ever changing ruts and bumps make easy jumps very challenging. On track walk, I heard many riders commenting on a “basic” layout but I saw it viewed similarly to Daytona. The design might indeed be simple but with soft dirt, hard dirt, and devolving conditions, a simple design becomes downright brutal by the end of two main events. I will finish this question with a question: could you imagine if the track design was very technical? It would have been a salvage yard by the end.

Can an easy track become difficult because riders have to push for every last inch to make up time?

I don’t know if I would use “difficult” but I understand the concept you’re pushing for. To me, an easy track can become treacherous because the riders “override” the track, eeking out every inch of speed. That puts riders on the edge of control and if a crash does indeed happen, it’s usually a big one. On a super technical track, riders are forced to exercise much more caution and that can keep them out of trouble. It’s a bit counter intuitive. Easy tracks can end up being much riskier than very difficult ones.

The two rhythms after the first turn were tough for the 250s to do consistently. What was so tough?

The first rhythm was very difficult with that first double-triple. The final triple was almost a formality but as riders exited the flat first turn, they had to seat bounce/hop over a small double and then seat bounce the first triple. The ruts made things even more challenging but the main difficulty was getting drive and “pop” off of the triple face. Add in the fact that a following rider knew that the corner required a bit of setting up, leaving him an opportunity to cut straight across to make contact. The lead rider always had to protect somewhat, which forced the lead rider to close down his corner angle, inevitably slowing him down. Ideally, riders would open the corner up like a road race entry, carrying momentum through the apex and making the double easier. With a rider immediately behind, though, opening up the corner entry is asking to be block passed. It’s a tricky dynamic.

Talk about how critical it was for Roczen to get this win at this stage of the season?

It was a huge win for Kenny. I have felt that these deteriorated tracks have pushed Kenny into a more hesitant version of himself. He has been determined to stay healthy this season and I feel that he has not been willing to take big chances when things get dicey. Whether on a broken down track or in heavy traffic, I just see him wanting to be a bit careful at times.

This week, though, he dropped the hammer from the get go. He was in his own world and was really never challenged. I think Tomac might have had the speed to go with him but as we have seen so many times, Eli put himself in a bad situation on the first lap. Kenny had the speed, got the start, and waved goodbye. Just when it seemed Eli was going to go on a run that might determine the season’s outcome, Kenny came through with a statement win.

Similarly, talk about Chase Sexton returning fire after Shane McElrath dominated round one.

For those who watched closely at round one in Tampa, this isn’t a huge surprise. McElrath had it easy, yes, but Sexton was great all day. Leaving Tampa, I had a feeling that it would be those two. Sexton’s starts have been better in the past two weeks and his riding is doing the talking. I think we will see these two trade wins down the stretch, they seem to be very evenly matched. On rougher, beat up tracks like Atlanta, I think Sexton might have a slight edge. McElrath looks to have a bit more speed on a perfect track, though, so we might see the results be more dictated by the conditions than anything else.

How was Cooper Webb feeling on Sunday morning after the race?

I don’t think he was overjoyed but I think it has to be viewed as a success. Many wondered if he could even race this weekend so to beat Tomac and grab a podium, that’s a good day. The obvious downside is that he lost valuable points to Roczen but sometimes you have to find the silver lining in a tough situation. He’s going to be less sore and have a bit more spring in his step come Daytona.

I think he has to be pumped. The most unfortunate aspect of his race is that he had, of all people, Cooper Webb and Eli Tomac to fend off on the last lap. Could you think of a worse scenario? Webb might be the smartest last lap rider I have ever seen and Tomac is some sort of fitness robot at the end of races. Marty rode great, got a top five, and should be very proud of that. He didn’t crash, either, which was something he was unable to say leaving Arlington (much to the dismay of my fantasy team).

Take us through Eli Tomac’s pass attempts on Justin Barcia and Blake Baggett.

This back and forth with Barcia has been an ongoing saga. It’s not really doing either of them any favors, either. For Tomac, he should be hoping to avoid any drama whatsoever. Clean weekends with podium points is the name of the game. Smashing yourself into a heap of motorcycle chaos isn’t usually a championship recipe. Barcia might be the last person I would want owing me one (nod to JA21 here too). This isn’t over I would guess but if I am Tomac, I would try to avoid any run-ins with one of the best to play the contact game.

With Baggett, Tomac got impatient, plain and simple. He saw Kenny disappearing and was having a hard time moving forward. The track was very difficult to pass which made the start crucial. He blew the start and then panicked. He made an aggressive pass on Barcia, too, so he knew he needed to get away before Barcia tried to pay him back. That led to a pass on Baggett when he didn’t have the angle to really execute it. That caused heavy contact and at minimum, one rider was going to crash. To pull that off cleanly, he would have had to be another bike length or two ahead of his track position. His move turned into a full-on takeout and ended up taking himself down, too.

It was a pretty poor decision and was born out of the urgency he surely felt. Barcia and Anderson were forcing the issue behind him and he knew he had to move forward or face an aggressive pass attempt in literally every corner. Now, he has a very angry Blake Baggett who will be looking to repay the favor at every turn. Baggett has nothing to lose and Barcia has a lot to gain by seeing Tomac on the ground. Quite the gauntlet he will be navigating over the next few weeks.

Baggett cut down on Tomac. Does he get some blame for the crash?

This was mostly Tomac's fault but it was a small percentage a racing accident, also. Tomac went in there to attempt a block pass but he also anticipated Baggett railing around the berm and making his pivot much further around the apex. When Baggett decided to pivot hard and cut down, Tomac was past the point of no return. It's Tomac's fault for choosing that entry angle but had Baggett continued around the berm, it would have turned out much differently. It's always dicey when assigning blame in these situations. There is one school of thought that says the lead rider has the right of way and can go wherever he chooses. It has to be mentioned, though, that anticipating what your competition is doing behind you pays dividends. In this instance, Blake was trying to make a pass forward and didn't know Tomac had committed to that harsh angle. It was the worst possible scenario and left both riders on the ground.