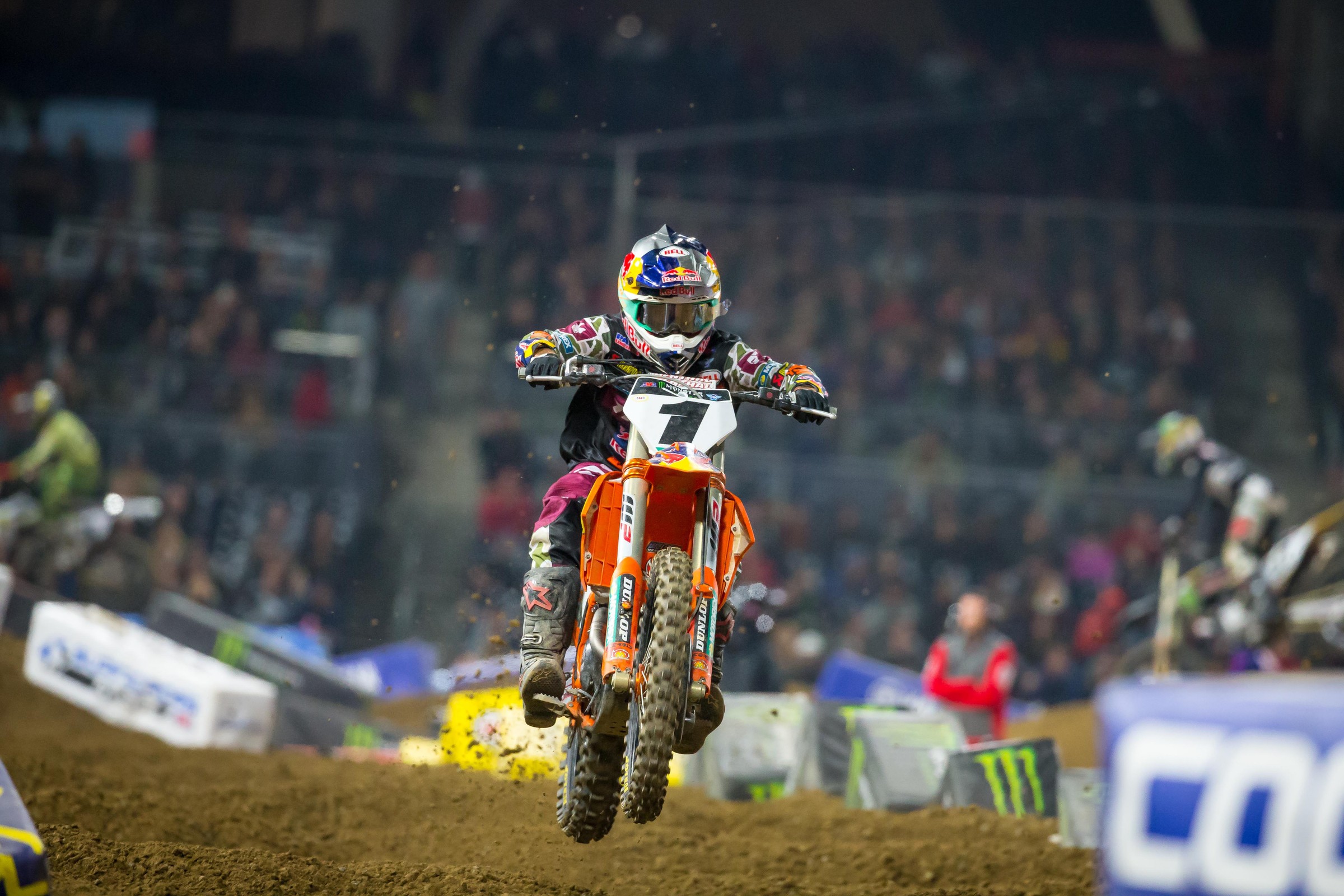 Last weekend in San Diego, California, at the sixth round of Monster Energy AMA Supercross we saw a big ol’ pair of beat up whoops. Some riders like Michael Mosiman, Adam Cianciarulo, and Blake Baggett chose to continue to blitz through the top of the whoops while others including Justin Cooper and Cooper Webb chose to take the jumping line—which worked out to both rider’s advantages.

This week for 3 on 3, we asked editors-at-large Jason Thomas, Kris Keefer, and NBC pit reporter Daniel Blair whether or not riders practice beat up tracks and if riders hate jumping whoops. They also give some predictions on the 250SX East Region.

1. Longer races and four strokes that churn up dirt = hammered tracks. Is jumping whoops just becoming the thing to do now? Do racers actually practice this? Should they?

Jason Thomas: Jumping whoops is and always has been situational. Most of the day and night at most rounds, blitzing is the fastest way to attack whoops. At many of the rounds, the whoops become so uneven and cupped that blitzing either becomes extremely difficult or slows down. When that happens, jumping through them becomes a viable option. The real question is when and if. This isn’t an every round thing for the sport’s elite. It’s become more common with 450 power deteriorating the whoops but there are still tracks where blitzing is the only way to succeed. Glendale was a good example of this and Cooper Webb’s liability was on full display. He wasn’t terrible, per se, but he certainly was passed several times in the whoops throughout the night. At a track like San Diego, though, he was able to finally utilize his jumping prowess in the main event.

As we push east, his advantage will become more prominent. The softer dirt will break down sooner and his jumping opportunities will arrive earlier in the night. Having said that, I expect the next two rounds, although east, to be blitz oriented. Tampa’s dirt is hard-packed and Arlington can be some of the hardest dirt of the championship. Keep an eye on this specific dynamic and how it effects the results.

Kris Keefer: Look, I have been telling this to JT for a while now. I don't care about skimming whoops in the main event at most races! Why? Because by the time we get to the main event, they are completely destroyed! The series is headed to the East Coast now and the whoops are only going to get more chewed up with the softer conditions. Now, I am not going to sit here and say that skimming isn't a must have in your repertoire but being a strong whoop rider isn't a "MUST HAVE" to be a 450 Supercross Champion these days. Don't think that the top racers aren't jumping through their practice track whoop section in order to get a feel of it, but doing it in a race is a totally different animal. As much crap as us media people give Cooper Webb for not being the best guy in the whoops, he basically told us to shove it up our behinds, when he jumps 3-4-4 through them in order to gain time on Cianciarulo in San Diego. That is basically a virtual middle finger to all of us experts out there! Or maybe it's just to JT?

Daniel Blair: It’s no question that the modern 450 tears the whoops to pieces. I’ve seen them built multiple ways and unless you’re dealing with the hard pack of Glendale or Las Vegas, jumping will be an option. Marvin Musquin has been doing this for years. His teammate Cooper Webb picked up on it and uses it regularly. The majority of test tracks in California are hard packed so practicing it there is nonexistent. The Florida tracks should break down in a way that allows the opportunity to figure out a jumping technique. I doubt they do.

2. Do a lot of riders secretly hate jumping whoops? (Or maybe they outwardly hate it!)

Thomas: I don’t know if “hate” is the right word but there are definitely riders that don’t enjoy it. Chad Reed is notorious for his distaste of jumping whoops. He berated me daily in my racing days for my jumping tendency. When watching today’s stars, riders like Blake Baggett, Eli Tomac, Ken Roczen, Adam Cianciarulo, and Justin Brayton immediately come to mind when thinking of blitzers>jumpers. Riders turn thousands of laps blitzing whoops at their practice track and then are sometimes forced to abandon all of that effort in favor of jumping their way through. Watching Chad Reed try to jump whoops at his track was one of the more comical things I have seen him do on a dirt bike. These riders are incredibly talented and almost robotic in how then can execute laps but when they are forced out of their comfort zone, there is still an unfamiliarity. Watching Webb or Musquin quad through a whoops section followed by the field trying to counter that effort is a great example.

Keefer: I went to the Travis Preston school of whoops when I was racing, so I could actually do both (jump and skim) pretty well. However, I honestly think riders get in a hurry when they're racing because it's drilled into their minds that skimming is simply "the way" to get through whoops the fastest. It feels fast when you do it right, but sometimes the old saying goes, "Work smarter, not harder." It's tough as a racer to say "Okay, I am going to start jumping through them at lap 11 and hopefully it works out." Racers usually don't like change mid moto and when they do change it up, it can end up in a slower lap time, so it's tough to fully commit to a completely different way through a section. The new age racer has to basically open up his mind more now because four strokes as well as the timed main events have forced riders to become more creative than in years past. This also goes for being a well-rounded rider through whoops. You don't have to be the best rider ever in the whoops, but you have to be able to be comfortable at being decent with skimming or jumping. Look at Mookie! Is anyone faster than Mookie when skimming the whoops? NO! Is he winning? NO! You have to be good at both. Not great, but good!

Blair: Riders hate jumping whoops. I’ve heard them say it. I don’t understand this. The goal is to win races and when there is a very distinct technique in the most difficult section of the track and when Cooper Webb hops his way to a title, these riders should look to master it even if it’s not as traditional. The goal is to go as fast as possible and sometimes the backup plan of jumping whoops becomes the primary choice. Instead of hating it... master it.... and love it all the way to the bank. Webb did.

3. Thoughts or predictions on the 250SX East Region?

Thomas: I think this 250SX East Region is wide open. While the West looked to be a three-horse race from the start, I have the East as a five-rider showdown. RJ Hampshire, Shane McElrath, Chase Sexton, Jeremy Mart, and Jordon Smith all will enter Saturday thinking “this is my year.” As racing goes, hearts will be broken on Saturday for some. I do expect a revolving podium door as many riders have a shot. The rookies are a huge unknown but look for fireworks in the early laps. Jalek Swoll, Brian Moreau, and Jo Shimoda could all come out swinging but I just don’t know if they have enough to beat the “fab-five” for 16 minutes. If I had to choose, I guess I will take Sugar Shane to finally make good on a title I thought he would win a few years ago. That Monster Energy/Star Racing Yamaha YZ250F looks awfully strong and his race winning experience could be the difference in an evenly matched field.

Keefer: The 250SX East Region is going to be fun! Sexton will obviously be the guy to beat in my opinion, but the rider who can win this whole thing is McElrath. He's on a bike he really likes, I've heard that bike is fast, he seems to be more motivated than ever, and he's on East Coast dirt where I feel he's most comfortable. Just like Matthes, I am really high on RJ Hampshire! Training with Aldon Baker and getting on a program like that while riding with the top 450 guys day in and day out, only gives you more confidence when you're racing your own class come Saturday nights. To me, this East Coast is a little deeper than the West, so we might get a little 450SX-type of unpredictability from week to week.

Blair: The 250SX East is going to be wild. I can make the case that five riders should get this title. McElrath is due. He’s been at the top of this class for years. But....how will he do on the East where the majority of the races are rutty. He’s always been stronger on the hard pack. Sexton can back this up. He’s talented, experienced, and on a bike that is dramatically better than it was a year ago when he won the title. Jeremy Martin is pissed. You can hear it in his voice. After what I saw at the Monster Energy Cup and Paris Supercross, it’s no question he’s recovered from his injuries. And back in 2018 he was on fire late in the season. Jordon Smith has been close to winning this title twice. Now he’s on the winningest team in the sport’s history. Go look at the #1 plates on the door. The Smith—PC combo could be scary. RJ Hampshire is on the bike and program that won this title back to back in ‘17-‘18 with Zach Osborne. He’s also running a PulpMX sticker on his helmet which means Steve will be around a lot. Wait, never mind. RJ doesn’t have a chance.