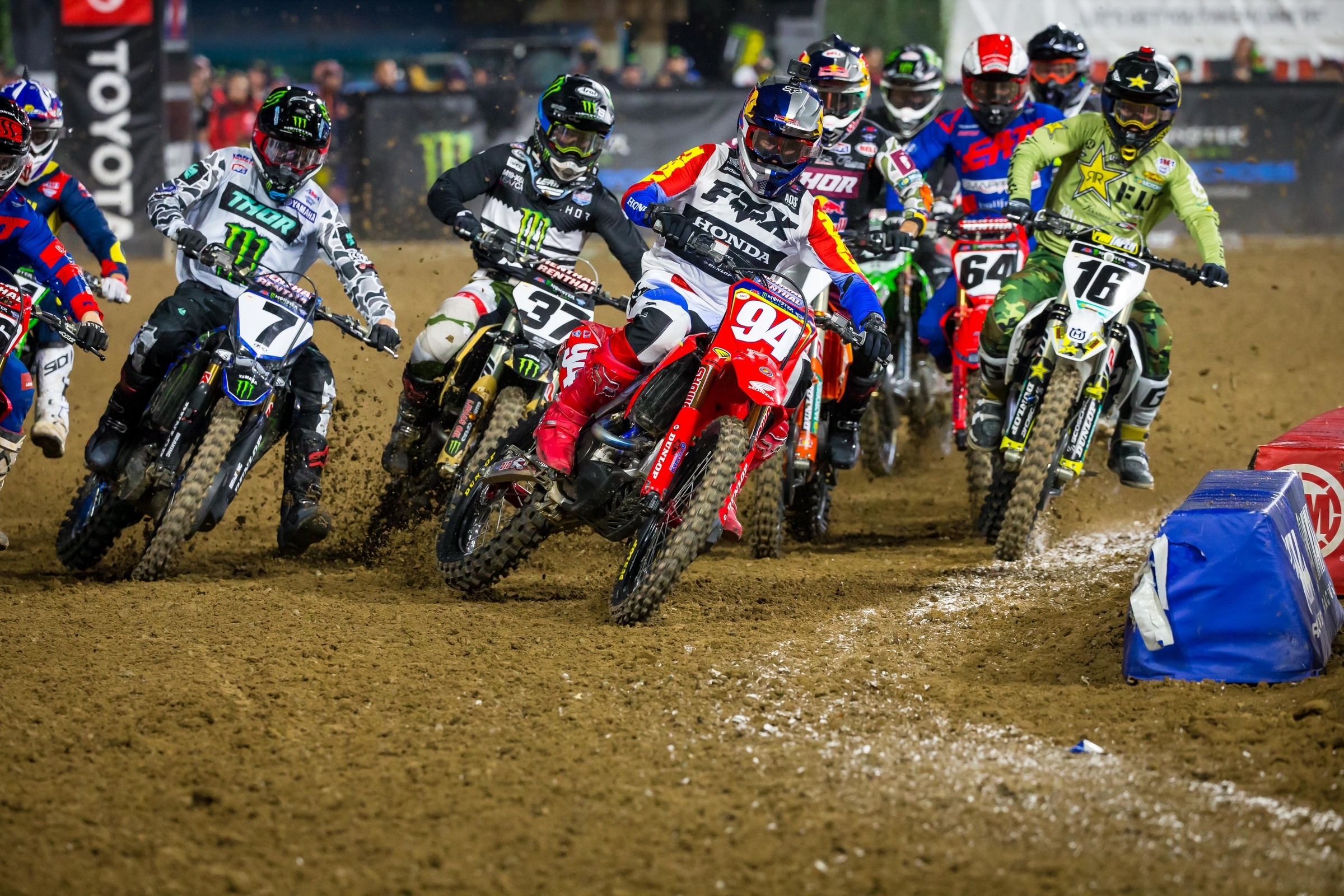 Coming into San Diego the scene was set for what had the potential to be a wild night of racing with major momentum swings in both classes. After all, Ken Roczen led Eli Tomac by just three points and Dylan Ferrandis had just two points on Justin Cooper. It was a very real possibility that there could be new 250SX  and 450SX championship leaders by the time the checkers flew. But is that how it all went down? Let’s get into this week’s Saturday Night Live and find out.

As mentioned above, there was plenty of attention on Tomac and Roczen coming into the weekend. Tomac had won the week before, Roczen had won the week before that, and the points race was especially tight. The feeling wasthat they’d be battling it out up front for the win, as well as for supremacy in the standings. Well, it didn’t exactly go that way. Neither of them won. In fact, neither of them even finished on the podium! Instead it was Cooper Webb who took top honors, after spending most of the race in second behind Adam Cianciarulo. As the race started to wind down Webb had tightened up on Cianciarulo and tried over and over to make something work. When he finally broke through, Cianciarulo was unable to fight back and Webb inched away to take the win, his first of the season.

“I was pretty comfortable all day,” Webb said in the post-race press conference. “Adam was riding really well. I couldn’t make up any time and the track was deteriorating. It’s hard when you’re leading, you want to try things, but you don’t want to make a mistake so it’s tough being in that situation. We had a few battles and that was honestly a really fun main event and it’s cool to walk away with the win for sure.”

Webb rode with Blake Baggett earlier in the week, and cited Baggett’s whoop speed as something he was able to learn from coming into San Diego.

“The team, we all sat down and just said, ‘Hey we all need to be better and figure it out.’ We (Baggett) got to ride a little bit this week and he’s a bad dude in the whoops so it’s cool to kind of see that and see what I’m doing wrong a little bit. Early on, I felt pretty strong in them and kind of all day.”

Although Cianciarulo would have been happier had he been able to break through for his first 450SX win, he was quick to point out that he simply wasn’t the best guy in San Diego, but that he still rode well.

“I’ve been waiting for this moment to be on the big stage, racing the premier class in supercross for a long time and you never really know where you’re going to be.” Cianciarulo said. “I felt like I could be up here but it’s a whole different world. You have to learn and you have to adapt. It means a lot for me to get up here at this point of the season. Obviously, it’s still pretty early. I felt like rode well and made a lot of progress. I adapted and was trying a bunch of different stuff, it just didn’t work.”

Rounding out the podium was Blake Baggett, who spent most of the race all by himself in third, close enough to see the fight between Webb and Cianciarulo, but not close enough to be a factor it in. Even still, it’s a massive shift forward for Baggett, who’s had immense speed this season but often hasn’t seen it manifest itself in the main events.

“I felt like I had some spots where I was catching those guys a little bit. They were playing cat and mouse a little bit so they were kind of slowing up the pace,” Baggett said. “I reeled them in a little bit but when I made a mistake they’d gap right back out. It was one of those nights where I felt I left a little bit out there in some areas but I’ve also been super far from having a podium so I’m super stoked to be up here. We’re just going to keep working on this. I finally dialed in my starts. Big thanks to KTM for letting me ride with them this week. I got to ride with Coop [Cooper Webb] and that’s always helpful.”

Justin Barcia made news this weekend before the sun even came up on race day, thanks to a little dustup with Martin Davalos on press day, but that seemed about a million miles away during the main event. Barcia found himself mired in one of the best battles of the night when Tomac and Roczen, who hadn’t started well, were slicing forward. Roczen put in the initial attack on Barcia but Barcia fought him off. Tomac was next to test Barcia and the two went at it like a pair of hungry dogs scrapping over a bone. Tomac finally drove it in so deep on Barcia before the finish line that neither rider could clear the jump and they both rolled over it. Tomac had the lead, but Barcia came in hot a few turns later and got into the back of him and went by on the inside in the next corner. Tomac would eventually take ownership of fourth, and after the race Barcia let him know he didn’t think he needed to run it in on him as hard as he did. Tomac’s response? “I could have hit you harder.”

Aaron Plessinger had a great race, and even though he crashed while running third, he was pretty happy about the way things went. Afterward he told us they made some changes during the week and even switched up the practice venue and really worked hard on trying new things.

“That’s the speed I’m used to running at the practice tracks and it felt good to be up there,” Plessinger said. “I felt where I belong. I felt so comfortable. I don’t know how it looked but I felt like I was riding smooth. I was breathing, I was flowing, and that’s where I want to be every weekend. It was unreal. The bike changed, I felt like a stinkbug last weekend. Last week I was just so confused until Wednesday, but after that I left the track knowing I was going to do good this weekend. It’s a great feeling.”

Justin Brayton worked his way up to seventh following a bad start.

“I was happy with how I was riding all day, and I was in the fight for the fastest time all day,” Brayton said. “In the heat race I was pretty good, second behind AC [Cianciarulo]. But in the main I gated like twelfth, not great. I just got pushed kind of wide and you can’t do that. I was able to come up to seventh though. I was riding really good and my fitness felt great. If I could just start in the top five or top three one of these nights and get that track position right away I think it would be a really good night.”

Brayton’s result didn’t come without a run-in with Jason Anderson, which ultimately ended with Anderson on the ground. Brayton even spoke with the AMA afterward and reviewed tape of the incident.

“He came in and pretty much T-boned me off the track,” Brayton said. “I came back on and in the next turn, he kind of turned down into me, and he went down. That was the end of that."

Leaving California, Roczen still holds the red plate but barely—Tomac trails by a single point. Webb jumped to third in the standings with his win and is now just nine points back of Roczen. Things couldn’t be much tighter, especially with six races already down!

The racing was superb in the 250 Class too, although Justin Cooper wasn’t able to take the points lead back from Dylan Ferrandis, who’d wrestled it away the week before in Oakland. But when the gate dropped for the main, it wasn’t Cooper, Ferrandis, or even Forkner taking the lead—it was Michael Mosiman. The Rockstar Energy Husqvarna Factory Racing rider put in some great laps, leading the first four, but wasn’t able to withstand the pressure of Forkner, Ferrandis, and Cooper, and he ended up losing touch with the battle up front to finish fourth. Afterward he said he didn’t tense up in the lead and that one of the first things that came to mind was how much fun it was to be up there.

The best battle of the race was between Ferrandis and Forkner. Lap after lap Forkner was able to withstand the constant attacks from Ferrandis, and each time Ferrandis wasn’t able to make a pass stick Forkner would squirt back away just a little bit. There were a few times when Ferrandis could have probably made something work with an aggressive block-pass, but he’s mentioned he’s trying to keep things as clean as possible. When he finally did make a move he took Forkner high in a berm, leaving the Monster Energy/Pro Circuit/Kawasaki rider with nowhere to go but to roll over the berm. It wasn’t dirty, but the crowd was quick to voice their disapproval, and the boos came hard and fast during Ferrandis’ podium interview after the race. In the post-race press conference Forkner said he would have done the same thing if the situation was reversed.

“I mean, when you’re that close, it’s inches, it’s hundredths of seconds, and everything is that close which it has been for kind of the whole season. We all kind of have our fast parts on the track and what is he [Ferrandis] going to do? Follow me? If you have this much, you have to take it. That’s what I did with [Michael] Mosiman when I passed him in the main. Honestly, I jumped in to the inside and was like, ‘I don’t know if I’m going to make this pass but I’ve got to try.’ He was behind me and he’s got to make something try to happen. It’s racing and if you guys are close then you’ve got to throw it in sometimes.”

Ferrandis credited improved starts for some of the success he’s been having lately, although let’s face it, his speed has been pretty incredible too.

“First two rounds we made a mistake with the team for the starts and we found a solution,” Ferrandis said. “Last two rounds the starts have been much better so that’s helped me a lot. The start was much better tonight and last weekend was a big improvement.”

Cooper saw his points deficit increase, but it wasn’t as bad of a swing as he’s had other nights so far this year.

“Starts are key and being consistent is what’s going to pay off in this championship,” Cooper said. “We’ve all had bad nights and I was the last one to have one. I felt like I rode good tonight, just a little bit off the pace.”