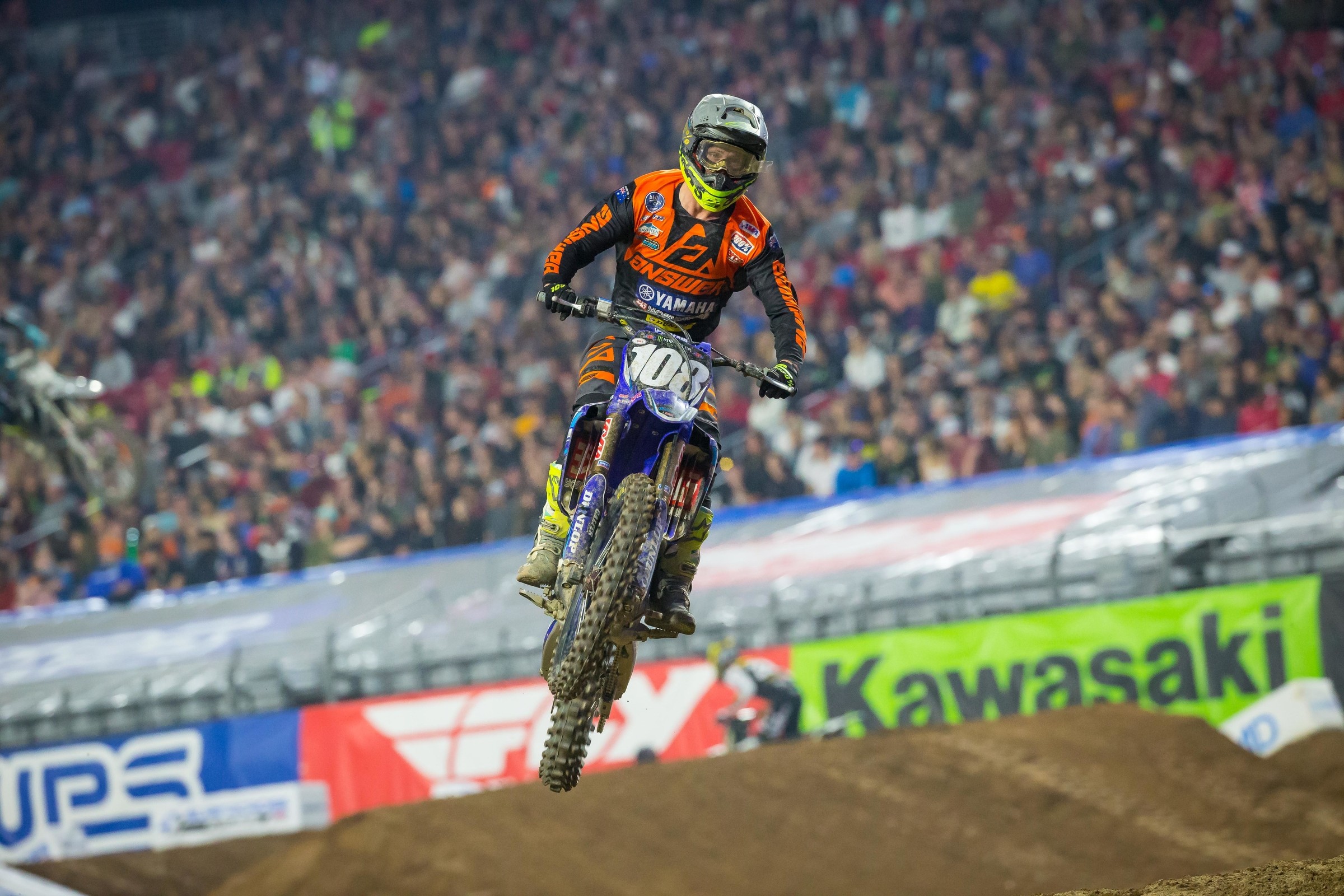 Three visiting Australians have hit the ranks of 250SX West in Monster Energy Supercross this year, and they’ve all had some success. Luke Clout, who narrowly missed this year’s Australian Supercross Championship (to Justin Brayton) in the 450 class, is now racing a 250 for the Penrite Honda team, which has set up a U.S. operation. He’s tenth in points with 21-7-6-10 finishes. Aaron Tanti missed the main event at Anaheim 1 but has delivered 13-13-16 finishes since for 17th in points. Jay Wilson—who won Australia’s SX2 (250) Championship in 2018—is right with Tanti in points, running 18th. He’s had finishes of 17-11-15 at the two Anaheim’s and Glendale (he sat out of St. Louis).

Here are three questions and three answers from three Aussies.

Luke Clout: It’s been fun, and also challenging. Learning a new bike and getting back to riding a 250 has been an adjustment but I’m starting to figure it out now, I’ve really enjoyed being at the races and getting to meet new people and traveling around to new places!

Jay Wilson: This trip has been epic so far. I have my wife and two-year-old daughter with me, as well as my mechanic and his family so it’s been really cool. It’s been nice to be able to go to the track to ride and not to have to prep and water it. [Laughs] We have been learning a lot on the bike, the intensity here is a lot higher than in Australia, so it’s been a process of getting comfortable with being a bit uncomfortable if that makes sense. Then the races on the weekend are different too but everyone has been really friendly and welcoming to us. We don’t want to go home now. [Laughs]

Aaron Tanti: The trip so far has been awesome, everyone has been so welcoming and helpful when needed. We have an awesome group of sponsors we use back home in Australia that have been awesome to me here too. Riding and racing with guys I’ve watched on TV and followed their careers is also pretty wicked! Also pretty cool to have made most of the main events and do some decent rides over here too.

2. What have you learned?

Clout: I’ve learned that racing here is completely different to home: tracks are different, bike setup, dirt and obviously the riders are top notch and the crowds are massive! The intensity of the racing has been the main thing I’ve been trying adjust to, but I’m really enjoying the challenge.

Wilson: We have learned a lot. I know coming over here we were really unsure of how everything was going to work, and where we were going to fit in. As I said the intensity is the biggest thing. The U.S. guys are super comfortable riding on their edge all the time, so for me it’s been about learning how to do that more consistently. We are definitely improving and I know with more time on the bike over here that we can be there too. The tracks are also built and maintained differently here so we have made some changes to our bike setup to match the new conditions. All of that has been a learning curve but I’ve enjoyed every minute of it. Even when things have been hard and I’ve known that I’m not the fastest guy here, it’s been awesome to step out of my comfort zone and see myself make gains every time we’re on the bike.

Tanti: I’ve learnt a lot since being here which I’ll be taking back home with me to keep on improving. Between me and my mechanic, who is also my suspension guy, we have learned a lot about bike setup and just little things like that will help us back home.

3. Where are you living and who is helping you get to the races?

Clout: I’m living with a family in Hemet, they’ve housed us and it’s been so good, I’m super thankful for them! Obviously I also have to thank the whole Penrite Honda team and everyone involved, my girlfriend and my brother/mechanic is my usual travel partners!

Wilson: We are living in Temecula which has been perfect for us. It’s close to the tracks, and has made the transition from being in Australia to the U.S. really easy. We have actually been doing the whole thing as privateers in a van. We have some really dedicated and important partners like MXStore, Altherm JCR, Berry Sweet, WRB Group, and Yamaha Australia who have helped fund the trip and supported us in a ton of different ways, but in terms of support in the U.S. it’s just my mechanic, my wife, daughter, and myself in the van every weekend and going racing. I’m proud of what we’ve been able to achieve so far with just a van, a quick shade and a few companies from Australia who have backed us. (You can support Wilson's efforts by purchasing merchandise at his website: http://jaywilsonracing.com.au/ )

Tanti: I’m living at an awesome family’s home in Chino that my team owner back home knows. It's really cool, they have been awesome and super accommodating. As for getting to the races it’s a combo of people from my main sponsor for this trip, Complete parts and equipment, Serco Yamaha and Yoshimura lending us their big van and shades and stuff. Me and my mechanic just drive to the rounds.