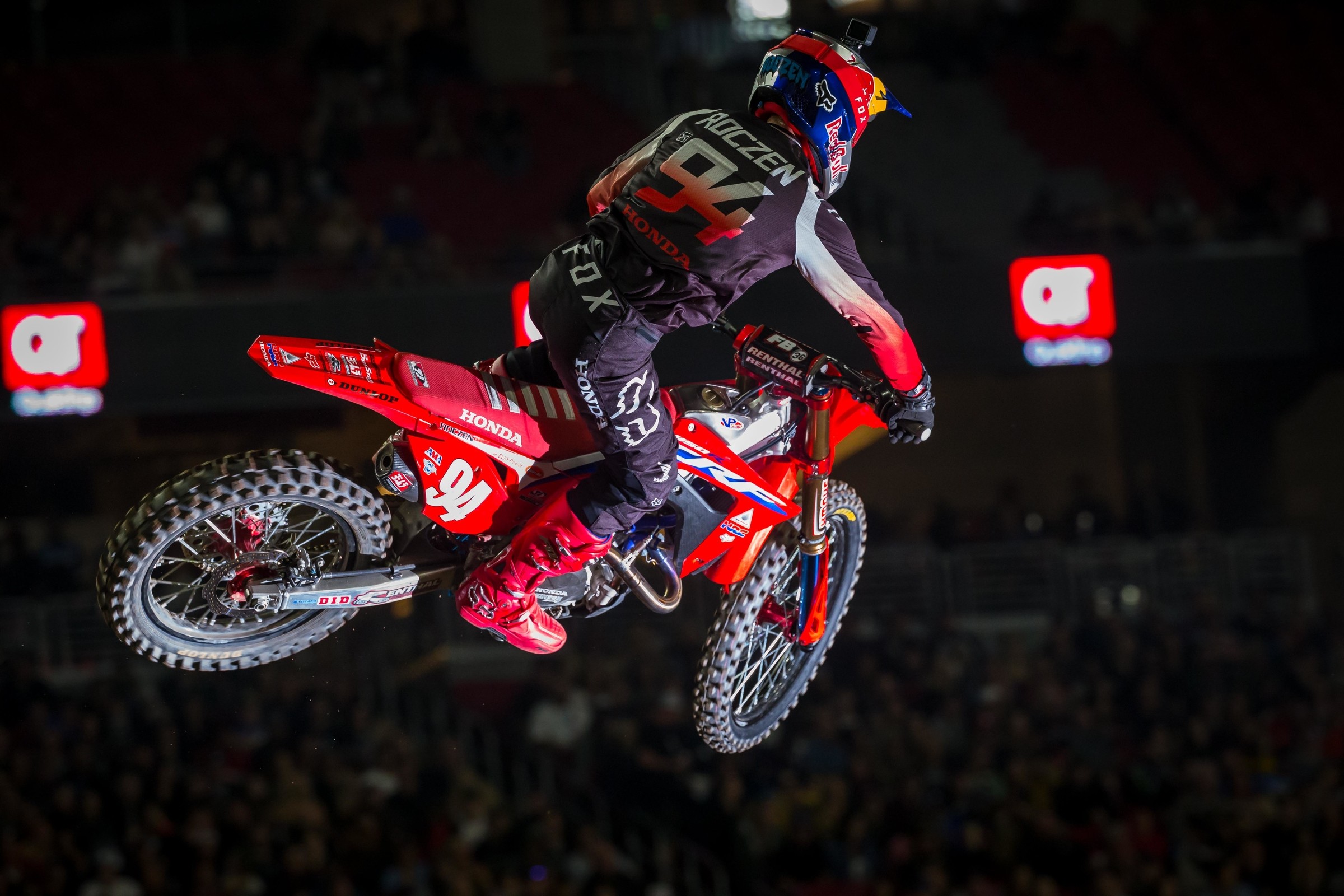 Every time Monster Energy AMA Supercross comes to Oakland the post-race interviews are always filled with mentions of how gnarly the track was, and for good reason. Northern California’s only supercross venue uses soft, sandy dirt that breaks down fast, which makes for a treacherous racing surface that’s full of seemingly bottomless, footpeg-yanking ruts. Doing well here isn’t always a matter of outright speed—go too hard and this track will bite you. Then again, being too cautions rarely lands riders in the winner’s circle. Expect whoever wins in Oakland to have a firm grip on the concept of balancing aggressiveness and calculated restraint. –Aaron Hansel

Justin Barcia started the 2020 season great, winning the first race and taking second in the next. Since then, however, things haven’t been quite as rosy. Barcia was ninth at A2, and although he did better in Glendale with a fifth, he was never in the race for the lead or even a podium. Afterward he told us he’d veered away from his A1 setup quite a bit, and that he planned on going back to that and fine tuning it. At eleven points out of the lead, Barcia is still very much in the hunt, and if he nails the setup for Oakland, he might be able to regain some of the ground he’s lost at the last two rounds. –Hansel

At this point in 2019 Cooper Webb held the red plate by two points over Ken Roczen, but now trails Roczen, this year’s current leader, by 20 points in fifth. But as far as his results go, they’re far from horrible. He’s only been off the podium twice, and his worst finish through four rounds in 2019, a tenth, is only two spots better than his worst finish so far this season (twelfth). And, his average finish is only 1.25 positions worse in 2020 (5.5 vs. 4.25). Had Webb had this season last year people would be taking note of how well he was doing! Webb won Oakland last year. Will he get back to his winning ways this weekend? ­–Hansel

Ken Roczen could retire today and his career would be considered a resounding success. Of course, that doesn’t mean he’s checked every box he’d like to. Obviously, he wants the Monster Energy Supercross Championship. It would also be nice to win in Oakland—he’s never won this race on a 450, and led until the white flag waved here in 2018. You’ve got to love his chances of getting it done this time. The HRC Honda rider already has two wins this season and is fresh off a perfect night of racing in Glendale, where he thoroughly smoked the competition in all three Triple Crown main events. Who thinks Roczen will cross off Oakland this weekend? –Hansel

Jacob Hayes didn’t come into 2020 at full potential, thanks to a shoulder injury he’d suffered while racing in Australia. After A1 he told us he thought he’d be back to form, or at least close to it, by Glendale. Well, the Gas Monkey Energy/AJE Motorsports rider lived up to his word, riding noticeably better and taking fifth overall, his best result of the season. Last year his best result of the season (and career), a fifth, came at Oakland, which happens to be where he’ll race this weekend. Will his forward motion continue in NorCal? -Hansel

Adam Cianciarulo suffered a brutal crash late last week at Glendale, going over the bars in the whoops. That ended his race and could have led to some serious injuries. The Monster Energy Kawasaki rookie has said he’s just sore but otherwise ready to go for Oakland. Cianciarulo has been spectacular in daytime qualifying this year and a contender for podiums at night. Was Glendale just a blip on the radar or is the long, grueling season on a big bike already showing its teeth? –Jason Weigandt

Here are Justin Hill’s finishes so far in 2020: 11-11-12-12. He went 9-13-10 in the Triple Crown results (for that 12th overall) last weekend. So far, Hill has been consistent, which is actually a big gain from last year, when he could show tremendous speed at times but could never harness it for a full main event. This is only Hill’s second year in the 450SX class, and last year was a mess, so there is a chance the Bullfrog Spas/SmarTop/MotoConcepts Honda rider is just trying to build a foundation here before uncorking the crazy lap times later. Hey, Hill is better this year, but he doesn’t want to be outside the top ten forever. Which weekend will mark his breakthrough? -Weigandt

Justin Cooper, Dylan Ferrandis, and Austin Forkner have all won races this year, but they also have another thing in common, they’ve all had one bad night through four rounds. Ferrandis crashed and finished 12th in St. Louis, Forkner crashed and finished 17th at Anaheim 2, and Cooper crashed a few times before salvaging an eighth last week at Glendale. With just 10 points separating them (and Brandon Hartranft mixed in), look to see who can put in solid results moving into the second half of the season. With Oakland often providing tricky soil as mentioned above, this could be a conservative round for the title contenders. -Kellen Brauer

Cameron Mcadoo suffered double collapsed lungs in a qualifying crash at St. Louis, but the Monster Energy/Pro Circuit Kawasaki rider returns to racing this weekend. Certainly, this seems like a quick turn around from such an injury, but McAdoo is no stranger to riding through pain. With Christian Craig and Jett Lawrence now out for the next couple weeks, McAdoo’s return makes for eight factory bikes on the gate in the 250SX class that unfortunately has been thinning from injuries. Look for McAdoo to start strong but perhaps struggle late in Oakland as he recovers. -Brauer

AP on the Rise

Aaron Plessinger caught the brunt of some criticism at the start of the year when teammate Justin Barcia seemed to have the Yamaha figured out and Plessinger appeared off his groove. Aside from an untimely fall after a good start at Anaheim 2, Plessinger has been steadily improving each week. Even in the Triple Crown at Glendale he got better with each gate drop picking up 11-9-8 scores for 9th overall. AP won Oakland on a 250 two years ago and was strong here in his rookie 450 season (albeit another fall spoiled that.) Soft, rutty dirt is Plessinger’s strong suit and he may take advantage of that this weekend to continue his progression. -Brauer