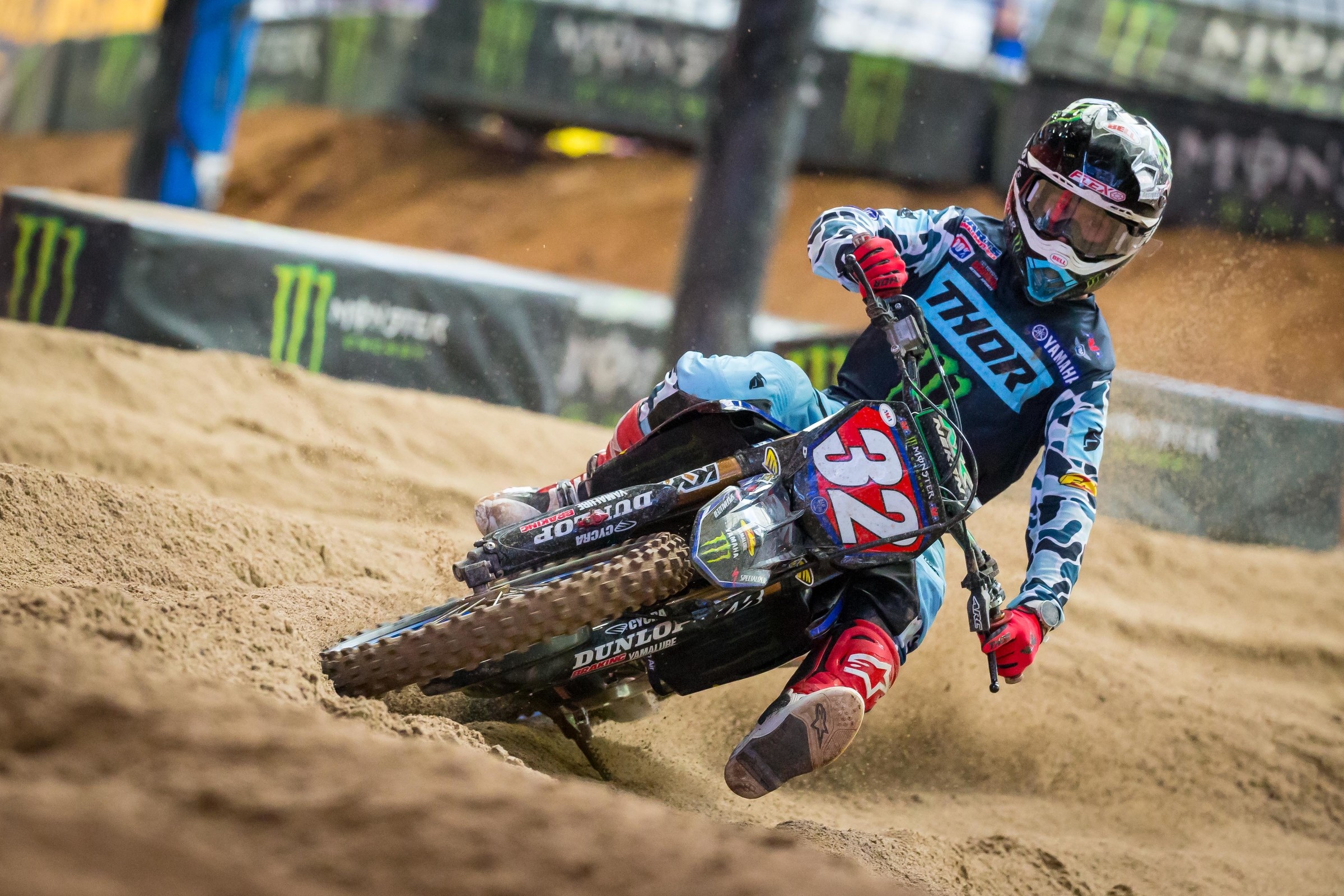 For the first time since its addition to the Monster Energy AMA Supercross Series, the first round of the Triple Crown took place in Glendale, AZ. The 450SX class has already seen three huge momentum shifts occur in just three rounds and it seemed we might be poised for another this week. With three races deciding the overall score at the end of the night, riders were hungry to get going when the first gate dropped.

The race itself will be remembered for the domination of Ken Roczen. The Honda HRC rider had good starts all night long and swept each race to take home his second win of the season. But it wasn’t as easy as it sounds for the German. Two full restarts were needed on the night unfortunately for rider injuries. The first was in main event two where Adam Cianciarulo drove a bit deep into turn one and clipped Justin Bogle causing Bogle to high-side and slam the deck. Bogle was knocked out cold and the red flag came out. Fortunately Bogle was able to get to the medical mule under his own power but he would be done for the night. The second red flag came in the third main event when Chris Blose fell hard in the whoops just a few laps in. Blose was down for quite a while as the medical team assessed him. He was eventually able to stand with some help and was taken to a nearby hospital for further evaluation. Team Owner Michael Lindsay confirmed that Blose sustained a concussion and a collapsed lung and there were concerns that he may have suffered a seizure while laying in the dirt on the track. Get well soon, Chris.

For Roczen’s sake, he was great on the restarts and that ultimately helped him to victory on the night.

“There was a lot of madness going on tonight,” said Roczen on the red flag situations. “I just try to have a clean slate every time the red flag happens. Those red flags are never fun to see. Every time you line back up on a start, there’s some sketchiness happening down there. Overall we stayed out of trouble and rode well.”

Behind Roczen, Eli Tomac put together a consistent night that began with better starts this week. Tomac applied a lot of pressure on Roczen in the first main event before Roczen was able to sneak away with the win in the closing minutes. The one bad start Tomac had all night was actually in the initial start for the third main event. On the restart, he was near the front but had an odd hang-up in turn two that pushed him outside the top 10.

“Half those starts I did come out top five, on the restarts I didn’t put myself in the best position,” said Tomac on his starts. “I just needed to be a little bit better in a few areas. I was kind of the number two guy tonight.”

Jason Anderson had a strong night with solid finishes. It was the second podium of the season for the 2018 champion, but he conceded there are a few things that the guys ahead of him in the points are better than him at. This week, Anderson had better starts to help him fight towards the front but that hasn’t been a consistent case for the Rockstar Energy Husqvarna rider. Anderson now sits just 14 points back of championship leader Ken Roczen after his 3rd place finish tonight.

Beyond the red flag situations, there were some other riders who hit the deck hard tonight. One of which was Adam Cianciarulo who was on his way to a great night overall before a violent crash in the whoops during the third main event pulled him out of podium contention. Cianciarulo has been fastest in practice and qualifying for 11 of the 12 sessions this year and his speed looked great tonight. Fortunately he did eventually get back up and crossed the finish line, albeit in 17th place. His overall scores still helped him to get 8th place points on the evening.

Cooper Webb put together a 4th place overall finish tonight with 8-5-4 scores. The defending champion had terrific starts in the second and third mains but would fall down to his finishing positions. The whoops appeared to be a trouble area for him, but he consistently got a bit better as the night went along. Glendale was Webb’s worst round of 2019 as he finished 10th there last year. He now sits 20 points down of Roczen in the standings.

Justin Barcia picked up a fifth on the night despite never being in the top five in any of the races. One thing of note was Barcia looked to have a bit of his Bam Bam flair back this week. When Barcia is feeling it, his body language on the bike lets you know and there were definite signs of that in practice. Four rounds in and Barcia’s still right in the thick of this championship hunt.

“It was a difficult night a little bit, but getting out of here healthy is a good thing,” said Barcia. “This track bit a few guys. The whoops were pretty gnarly because the dirt is so hard-packed here. They got really blue-grooved and a little edgy and took a few guys down. That sucks. All in all I didn’t have the best starts tonight and that put me in a difficult position on a track that was fairly one-lined. The racing was very tight and if you didn’t get the holeshot it was very difficult.”

Onto the 250s. Coming into the fourth round of the 250SX West Region Championship, there was a lot of drama to sort out. How would Christian Craig and Dylan Ferrandis sort out their contact from Anaheim 2? Could Austin Forkner rebound from a 17th place finish from the week prior? Up until this point of the season, Justin Cooper was the most consistent rider finishing on the podium each of the first three rounds. With the red backgrounds still firmly on his bike, Cooper was looking for another solid night in Glendale.

Forkner has been a machine in the Triple Crown events and it seemed like tonight was just another example of this format being good to him. In the first main event, he snagged the holeshot and dominated while chaos ensued behind him.

Justin Cooper ran into issues within the first lap as he went down and could not get his Monster Energy/Star Racing Yamaha YZ250F re-fired quickly. Once he got going, he was almost a full lap down and would need to go into salvage mode for the rest of the night.

Things couldn't be going much worse for the GEICO Honda. After losing Jett Lawrence to injury last week and seeing Christian Craig suffer a DNF through no fault of his own, the storm clouds opened up again in Glendale when Craig went down in the second main event and got trapped under his bike. He sustained a cut under his eye in the crash and the blood was obscuring his vision, prompting him to pull out for the rest of the night.

Cooper led the first lap of main event two before crashing all alone out front. Forkner took full advantage passing new leader Derek Drake around the halfway point and going on to the victory. The final main event went Cooper’s way this time as he led every lap and salvaged an 8th place overall on the evening. Forkner rode a calm and collected final main event coming home in third and taking the victory on the evening.

Ferrandis eventually wrapped up the night second overall, but believed his starts are what cost him the victory. The Monster Energy/Star Racing Yamaha rider had three starts inside the top 10, but could not match Austin Forkner’s lightning pace out of the gate. In the end, Ferrandis now sits just three points off his teammate Cooper, who retained the lead of the championship.

“The track was not easy, but [there were] less rhythms than usual,” said Ferrandis. “The start was a big problem for me tonight. I missed my first two starts and I don’t know why.”

Michael Mosiman quietly ended up on the podium with 4-4-6 scores. After a season that’s seen a bit too much time on the ground and some unfortunate situations, Mosiman was still not satisfied settling with third on the night.

“It’s been a rough start to the season and there’s been a lot higher expectations with all the progression last year,” said Mosiman of his first podium of 2020. “I just haven’t been riding like myself on the weekend’s and it’s been disappointing. We’ve been working on the bike some and I think we’re really making some improvements. I feel really comfortable on the starts right now and hope to see that continue.”

Brandon Hartranft continued his run of top five finishes as he snagged fourth this week. After two consecutive podium finishes prior to tonight, Hartranft is now just nine points down in the championship following Cooper’s up and down night. Jacob Hayes, who came into 2020 dealing with an injury suffered in Australia, had the best night of his season yet, earning fifth overall. From practice to the night's main events, Hayes looked better and more competitive that he did in the first three races.

“I knew I was coming in underprepared and under the radar, which I was okay with,” said Hayes of his ride tonight. “I just wanted to get better each week and I made Phoenix the round where I wanted to have a breakout ride and I think it showed all day.”