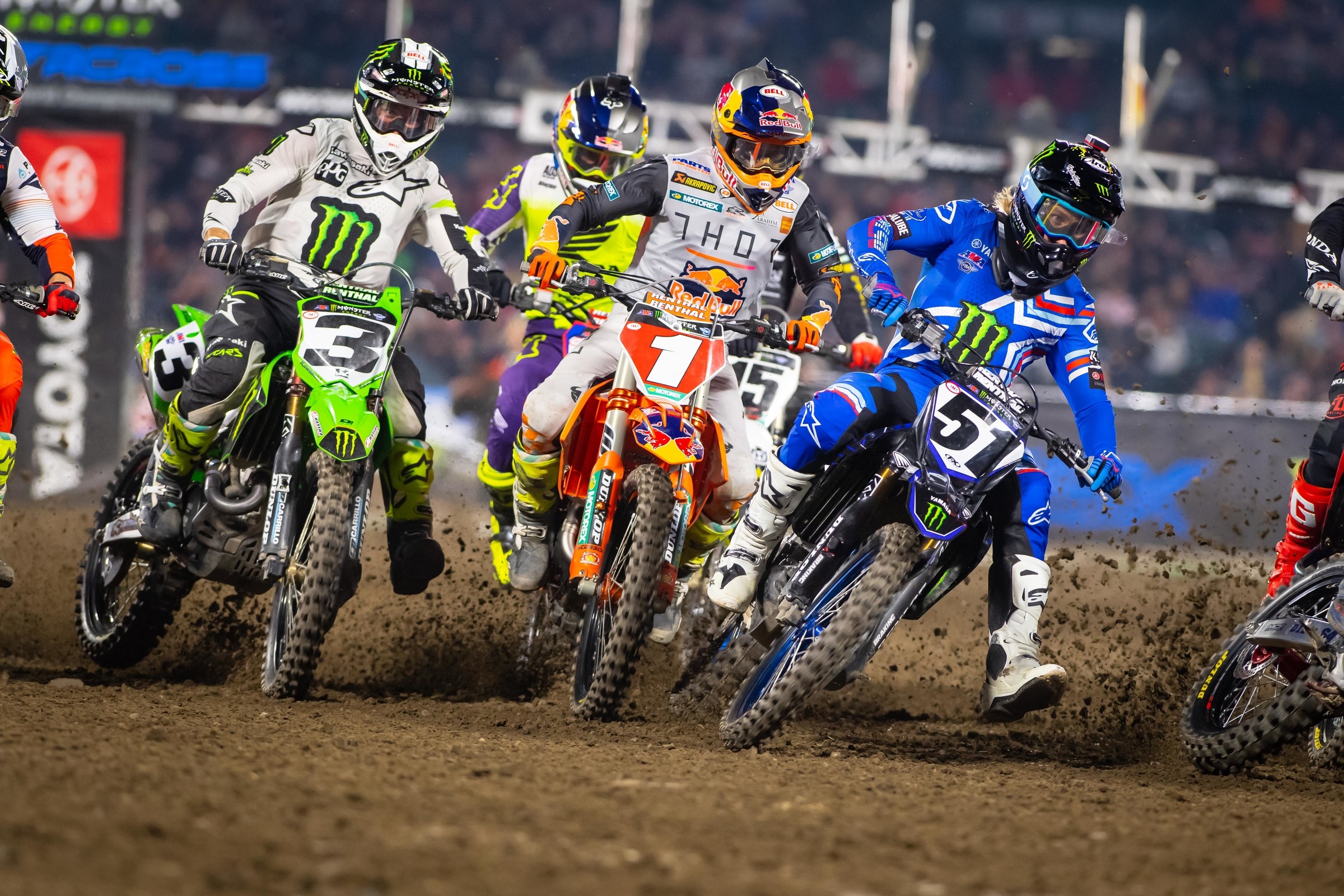 To say there was a lot of hype surrounding Adam Cianciarulo coming into the 2020 season of Monster Energy AMA Supercross is like saying Chad Reed’s Lamborghini is just a little zippy. The Monster Energy Kawasaki rider nearly had to wear raincoat over the weekend there was so much pump being sprayed on him! He handled it great too, qualifying fastest and leading laps in the main event. Yeah, he tossed away his chance at winning the thing, but he sure proved he’s ready to compete this year. In 2010, Ryan Dungey led a bunch of laps at the opener before eventually taking second. He won the following week. Will Cianciarulo follow Dungey’s mold in St. Louis? –Aaron Hansel

No matter who you’re a fan of, you’ve got to love the 250SX Class. Mere moments into the very first 250SX heat race of the season Justin Cooper made an aggressive pass on the inside of Austin Forkner, which left the Monster Energy/Pro Circuit Kawasaki rider in the dirt scrambling to remount. It didn’t end there either, as Forkner had words with Cooper immediately after the race, telling him it was a bold move for so early in the season. There weren’t any altercations after that, but who knows what might happen if the two find each other again in St. Louis. -Hansel

If you found Michael Mosiman before A1 and told him he’d walk away with fourth (he was moved up from fifth on account of Forkner’s gaffe), he probably would have been just fine with that, but when we spoke with him after the race he was anything but. To be clear, he wasn’t upset about his result, but he wasn’t happy about the way he rode, and even used the term “super squirrel” at one point to describe himself. He also acknowledged that it sometimes takes him a while to get going. With one race down we’ll see what happens if Mosiman rides to his own high standard this weekend. -Hansel

Considering how much talent there is in the 450SX Class, sixth place is a pretty incredible result. Then again, if you’re Ken Roczen it’s definitely not what you’re shooting for. Roczen credited a setup that was too stiff afterward, saying he felt like he was riding a BMX bike, and even acknowledged that coming in he knew his setup was on the stiff side. We’ll see what kind of speed Roczen brings to St. Louis after having a week to make the necessary adjustments. –Hansel

First off thank you for the support to my fans, friends, family and my team! From previous experience i have set my bike up very stiff for safety reasons. I have realized that even before going to Anaheim 1 that it May be on the stiff side. At the same time i didn’t want to flip everything upside down and keep messing around with anything just before the season starts. Ultimately i wanted to get to the races and then go from there. The tracks get really rough in the main and having a too stiff of a bike doesn’t help the whole situation and conditions. I felt like i was riding a BMX bike ?No excuse though! Not pointing fingers or anything. We all know i can be and should be up at the front. The first race is down, i got the speed and i have put in my work over the off season no doubt. This week is about taking everything a step down and come to St Louis happy and motivated! ??? ? @align.with.us

Dylan Ferrandis was incredibly fast all day. Even without looking at lap times it was easy to tell he was flying during afternoon qualifying, which was confirmed when he ended up as the fastest 250SX qualifier. But, thanks to a bad start, his eyebrow-elevating speed didn’t translate to a win. Keep an eye on Ferrandis when the gate drops in St. Louis. If he’s anywhere near the front it’s going to be tough for the competition to keep a handle on him. -Hansel

Last year, the series started in a baseball stadium (Anaheim) and immediately went to a football stadium (Glendale). Same story this year, although we’re in St. Louis for round two instead. Normally, riders are still dealing with the hard-packed dirt of California, Arizona, or even Houston a couple years ago at this early stage of the season. St. Louis typically has a bit more of the softer East Coast type soil, although it’s widely regarded as some of the best dirt of the series. If the track does break down more this weekend, we could see riders scratching their head a bit for setup. Look for the five bowl corners on the track to develop several lines from top to bottom as well. -Kellen Brauer

Cooper Webb and Zach Osborne both had some long days last weekend. Rockstar Energy Husqvarna team manager Bobby Hewitt reported that Osborne was running a fever as high as 103-degrees during the weekend at one point. Webb, of course, was talked about extensively regarding his struggles with the flu. Despite the rough days, Webb still managed a podium finish while Osborne was able to slide in through the LCQ and finish in 14th. Both will be looking to take advantage of some improved health this weekend. -Brauer

Normally, the second round of the series still pulls in a long entry list of riders in both classes. However, a few things may cause a dip in total riders we’ll see this weekend. First, and most obvious, St. Louis is a long drive from California in one week’s time for a lot of privateers. It seems like most of the satellite teams in the pits will make the haul, but for some 250SX class privateers, it may just be too much to handle. Also, several riders will be hopping over to Dortmund to race the German Supercross series this weekend which pulls some potential main event guys out of the entry list for St. Louis. Once we’re back in Anaheim next week for round three, this trend may even itself out. -Brauer

Several things contributed to Eli Tomac having an off night at Anaheim 1, but it all begins with the start. Tomac crossed the line at the end of lap one in 11th place last week and that was after a few quick passes on the first lap. He talked in the pre-season press conference about working on his craft when it comes to starts this year, even saying he was practicing one-foot-up starts. With all this practice comes potentially more pressure on the starts. When Eli had nothing to lose in 2018, he was quite good off the gate. One round is too small of a sample size to suggest Tomac won’t have his starts figured out this year, but he’ll need a better one in the main event this weekend to get going in the right direction. -Brauer

One round down, 16 to go. There’s always more chaos in the first couple rounds before the true championship contenders shine through with a steadier approach to every weekend. Now that the jitters of the season getting underway are behind them, who will begin to take those steps into finding consistent momentum and confidence? Round two last year was as much of a toss up as the opener with Blake Baggett taking the win before having a roller-coaster string of results in the next five races. That could happen again this weekend, but we also could see a more outlined view of what the rest of the series will be like than we did at Anaheim as well. -Brauer