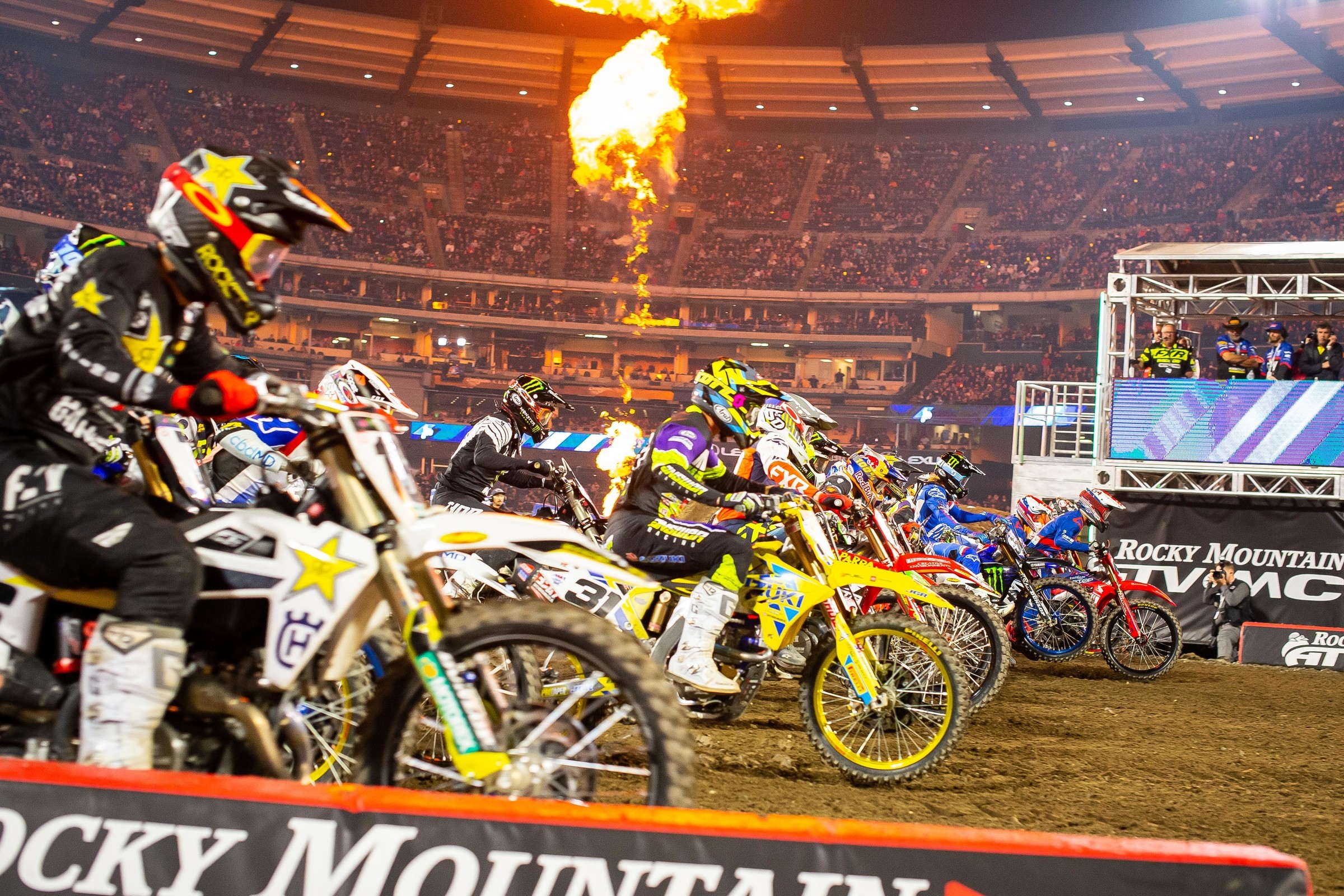 We’re once again firing off questions at long-time pro Jason Thomas for some opinions on the season opener of the 2020 Monster Energy AMA Supercross Championship.

This track seemed tougher than in years past. Thoughts on the build?

I am not a big fan of building an easy A1 track on purpose. There has been a tendency to dumb down the A1 layout in hopes of keeping people safe and getting people acclimated to the new season. The reality is that these riders have been burned a few thousand laps between September and January. They are finely tuned and ready to rip. Building an easy racetrack only hurts the final product and is a disservice to the skill level that these riders possess. Injuries happen, unfortunately. Easy tracks increase speed which is just as dangerous as slower, more technical sections. The toughest part of this year’s A1 track was the dirt being soft and breaking down, not the jumps or technical aspects.

Eli Tomac wasn't moving forward much in the main and he said it was due to arm pump. Is this something related to the tough track build that several riders struggled with or is it related to something Tomac did during the week before the race?

In my opinion, his arm pump was all mental. Eli has shown a tendency to struggle mentally at times. He lets the moment get the best of him at inopportune times, leading to the weird races we have seen from him. Go back to New Jersey 2017, Unadilla 2018, A1 2018, Arlington 2018, etc. There have been many races in his career that are nothing less than head scratching. It’s happened often enough now that it seems to just be a part of Eli’s makeup. He has been able to overcome it and win three straight Lucas Oil 450 Class Pro Motocross Championships but in Monster Energy AMA Supercross, he is going to need to come to grips with it.

We heard both Zach Osborne and Cooper Webb were under the weather Saturday. Webb managed a podium finish while Osborne had a crash, LCQ trip, and a not so great result to start to his year. After this weekend, is there any panic? And what does Osborne have to do from now until Saturday in order to get healthy again—what is that process like during the week compared to a normal race week?

Osborne had a day he would probably rather forget. I spoke with him on track walk and he definitely wasn’t on the up and up. The illness was weighing on him heavily and seemed to send him on a downward spiral before he even hit the track. My advice would be to just forget A1 happened. Convince yourself that St. Louis is actually the opener and hit the proverbial reset button.

The variable there is if he can actually get back to 100 percent healthy this week. Going into round two still suffering would be a tough pill to swallow.

Austin Forkner crashed again in qualifying which looked to shake him up pretty good. Will he finally learn or does he continue to go full-send during the day?

I don’t think he was taking big chances when he crashed. Those whoops were tricky and could have caught anyone (as they did many others). There isn’t really a way to get a good lap time without pushing hard and crashes will happen now and again. I didn’t see him going into the danger zone like he was repeatedly last season, so I will give him the benefit of the doubt this time.

What were your thoughts on Forkner's move in the main event and the penalty that he was given?

I chalked it up to an ill advised move in the heat of the moment. He had just given up a possible win and wasn’t thinking clearly at minimum. These decisions happen very quickly and it’s easy to over-analyze it in hindsight. Yes, he deserved a penalty but I would have preferred one spot instead of two. I don’t really believe two spots was befitting of the mistake but it’s all a judgment call on how the rule is interpreted.

Rookies Jett Lawrence and Derek Drake had a solid showing in their AMA Supercross debut. What stood out to you, either that they did well or they can work on?

Derek Drake didn’t stand out to me other than on the results page, so maybe that was the most impressive part of his day. He didn’t have big crashes or scary moments, just steady and solid.

Jett Lawrence, on the other hand, had me jumping out of my seat more than once. He had some big crashes in practice that he was lucky to escape from unscathed. Jett looked fast at times, out of control at times, and silky smooth at times. I don’t know what that means for his season but he should be entertaining, nonetheless.

Who leaves A1 worried?

I think there are a few guys that left Anaheim with some level of concern. Eli Tomac, Ken Roczen, and Aaron Plessinger all have had better days.

Eli just needs to find his rhythm and get out of his own way. I believe Eli was his own worst enemy last Saturday which wouldn’t be the first time.

Kenny made mention that he had his bike set up super stiff to avoid any potential crashes similar to 2017’s epic endo. As the track broke down, that stiffness made the bike more and more difficult to ride. If he can sort that out, I think he will be much better in St. Louis. He wasn’t great in Anaheim but I didn’t see any reason to hit the panic button just yet. If he fades again this weekend, though, my worry meter will jump up significantly.

Who leaves A1 pumped?

These are pretty obvious but Justin Cooper, Christian Craig, Justin Barcia, Adam Cianciarulo, and Cooper Webb are those with the smiles.

Justin Cooper won his first SX ever and just had everything break his way. He was impressive and showed marked improvement from last season.

Christian Craig finally got the WADA mess cleared up and could ride without worry this weekend. He looked like a different rider and ended up with a podium to show for it (thanks Forkner). I don’t have many examples of riders with better style than CC.

Justin Barcia won his heat, then won the A1 main event for the second year in a row. He was SO GOOD Saturday night.

Adam Cianciarulo was the talk of the pits after practice, period. He was fastest in all three sections and it really wasn’t even close most of the time. More impressive, he looked like he was barely trying! If there was any doubt about where he stacks up in the 450 field, I think that question was answered. Sky’s the limit for the #9.

Fantasy: who made you mad and who gave you hope?

Luke Clout killed me and many others like me. He was great all day and made it into the main event easily. He was riding around in the main event by himself and for some reason decided to throw away a top ten finish. I still haven’t quite recovered, yet, honestly.

Christian Craig was a home run pick and bounced back from a catastrophic 2019 season.