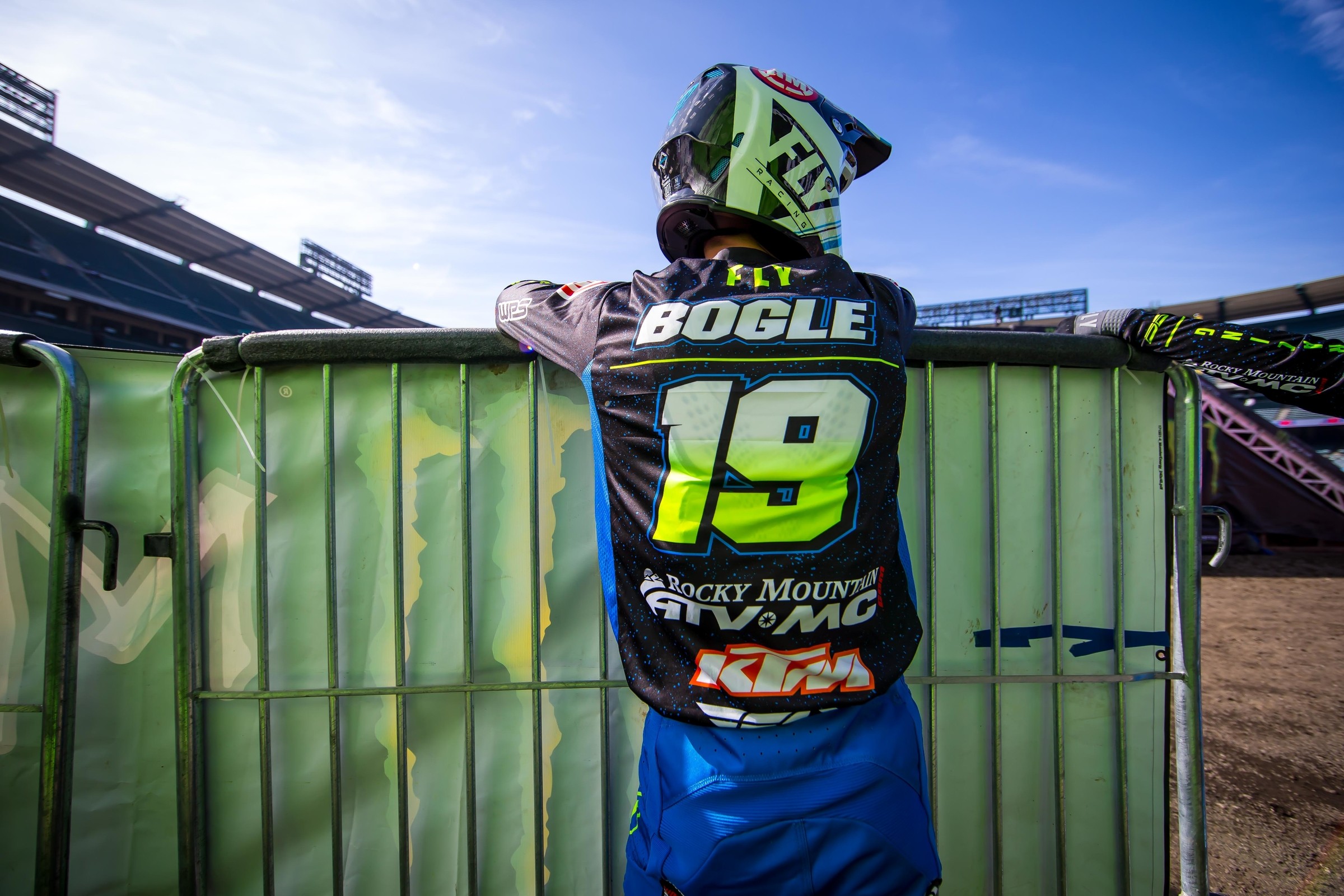 Between Baggett and Bogle

It’s safe to say that Rocky Mountain ATV/MC-KTM-WPS’ Blake Baggett had his best Anaheim 1 weekend ever. Not only did the recent father ride out with his four-month-old son, Braeker, during opening ceremonies, but he finished fourth in the 450SX main event. His best premier class A1 finish until then? Twelfth.

Although his result wasn't where he wants it to be, Justin Bogle is in a good place. The second Rocky Mountain ATV/MC-KTM-WPS rider now has a year with the team (and the bike) under his belt—compared to last year when he was a late addition to the team only days before A1—and he’s been able to build off of 2019 in his first full off-season.

Our Steve Matthes caught up to bother riders after the main event.

Racer X: Anaheim 1 hasn’t always been the greatest for you. I thought you were very, very good tonight. A quiet story. We’re going to talk about Barcia because he won, and Cooper Webb had a great day being sick. But I think underrated Anaheim 1 ride was yours. Very good. You got to be stoked.
Blake Baggett: Dude. You’re giving me a lot of acknowledgment. Do you need a place to stay tonight? Do you need a bed to sleep on?

You normally suck here.
Now the true Matthes came out.

You've got to be happy.
Yeah. Pretty good. I sucked all day long. Won’t cut that. Braeker did great in opening ceremonies though. We had a little talk. We went around and checked out the track. He told me where I sucked. He said everywhere. He said, “Dad, go.” Then raced the heat race. Came back, changed forks, changed shock. Then went out there in the main event and pulled it together somehow.

Doing that three-three rhythm late in the race. No one else was really doing it.
Yeah. It took me the longest. I don’t think I jumped it on press day or the first two practices, but I jumped it in the main event.

Fitness was good. You were hounding guys. You had to feel good there.
Yeah, felt pretty good. Riding good for round one.

Was it just because it was soft from rain, do you think?
I think so. It started out a little notchy as far as how they built it, but it got rough. It got really rough. It was hard to keep the thing going straight.

Guys were hooking lefts and rights all the time.
The whoops were bad.

Racer X: I got to be honest, a quiet day and night for you. I don’t remember being like, “Look at Bogle!” I don’t remember, “Bogle sucks,” either. It was a quiet night for you here at Anaheim.
Pretty average throughout the day. Nighttime came around and I struggled at the things I’m good at, so if that’s the case then you’re going to have a rough night. So my starts were absolutely horrendous. I may have been dead last in the main event. My heat race wasn’t good either. To be 100 percent real with you, I rode like dog shit. So I didn’t make the best decisions I think setting-wise myself. So I got some things to figure out this week, but I’m going to figure it out because I’m not here to do that. That’s not what I’m doing this stuff for. Not overjoyed by any means, but at the same time I’m healthy. My team is very, very much so behind me. So that’s something I’m extremely grateful for. We’ll figure it out.

Good off-season for you coming in, though? You feel 100 percent, all that?
Great off-season. Honestly, I had an off-season. I’ve never had one in my career since I was an amateur. So it’s nice to come in to the first round without having to ride twice and just send it. I didn’t get the result I wanted. I think it will start showing itself as we get going. Frustrating night, but at the same time, it does me no good to freak out about it. I’ll just figure it out.

You've got more of these coming up. A little East Coast-ish type of soil, huh?
The track was gnarly. Track was super gnarly. That’s where I didn’t make a good decision. Had Popeye arms on lap two. I think I've got to be more aware of that stuff. It’s not Anaheim when Jeremy McGrath raced. That was hard pack and that was different. This stuff is like an outdoor. It’s super rutty and bumpy and choppy. So just settings stuff that I got to be better at, which is fine. I can’t put blame on anything tonight besides myself, and that’s a good thing because that just means I got to be better and I believe in myself.

You’re in a better spot than you were last year.
Amen, brother. We’ll get this thing figured out one way or another.