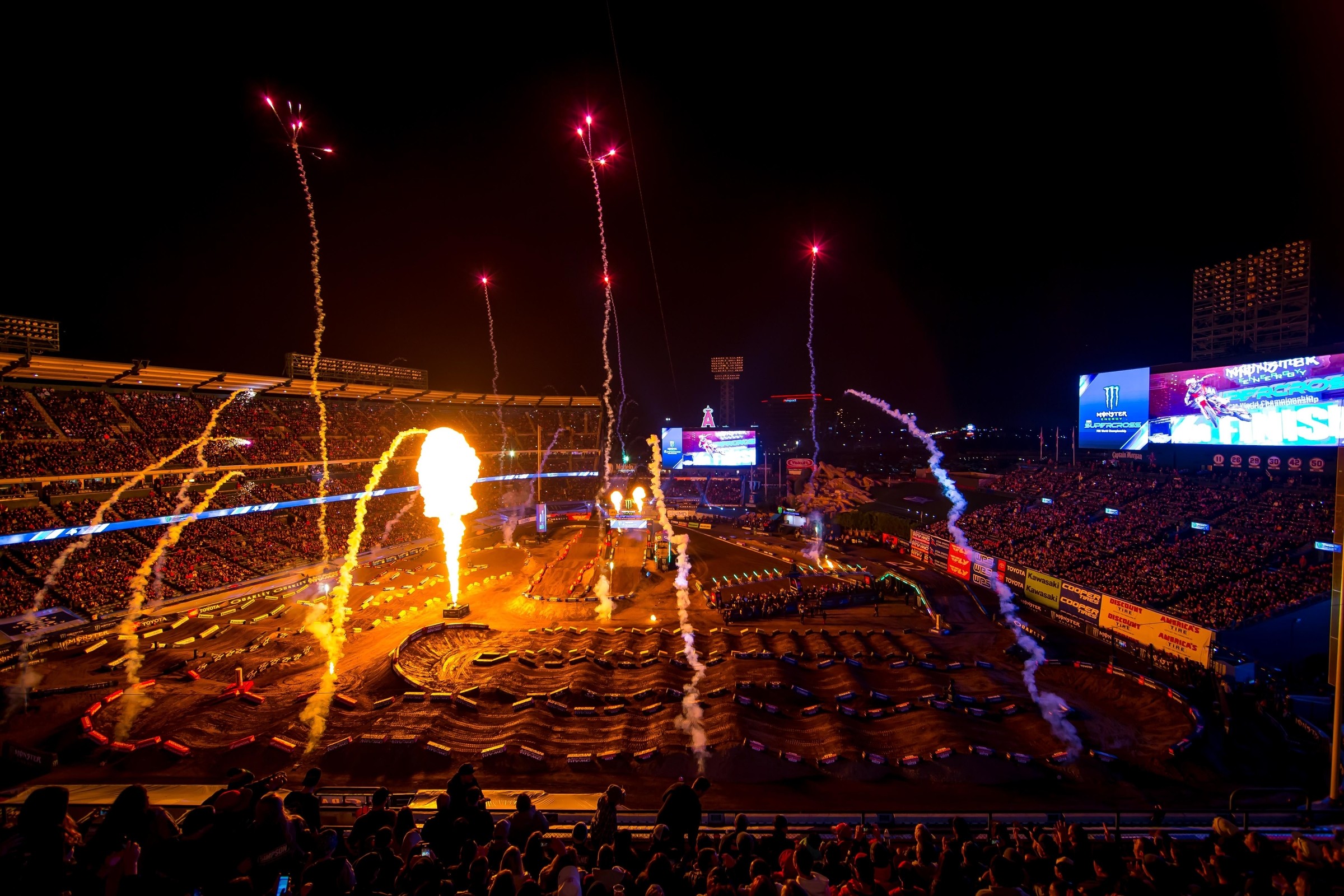 The season opener for Monster Energy AMA Supercross an FIM World Championship doesn’t really need any extra hype, because it’s already the most anticipated race of the year. You could, however, add even more excitement when you figure in that the most anticipated race also generally provides some of the most surprising results. Anticipation and unpredictability? You really can have it all, and this year’s opener did.

On paper this year’s edition of A1 might look routine, because it shows the same name on top for the second year in a row: Justin Barcia. Still, a Barcia win is anything but predictable, and even when he won last year’s first round it was in the mud. Outside of that he hadn’t won a 450SX since his rookie season way back in 2013. The weather was perfect in Anaheim this time, and Barcia won it again.

“To be honest last year I wasn’t comfortable on my bike at all, so that was a huge shock,” said Barcia. “I’m not saying I came here to win this race this year, but my hope was to be up there somewhere, and contend for this championship. I feel so good on my bike that I feel like I can do that. Last year, physically, mentally, I won this race but it probably wasn’t going to be my year, and obviously it wasn’t.”

The Barcia story coming into 2020 was a complete revamp of his Monster Energy Yamaha. Yamaha made subtle changes to the ’20 production machine, but staff changes for the team also helped.

“Yeah, thank goodness,” said Barcia. “Big off season, lot of work. They knew they weren’t in a good place. Obviously Cooper [Webb] left, and we see what Cooper did [last year]. They went back to the drawing board and changed a lot of things this year. We don’t have a test rider, I do all the work myself. Never rode so much in my life but I really enjoyed it, and it showed, everything I did worked tonight

“We don’t get factory parts from Japan, that’s just not a thing anymore, at least not for Yamaha. The engine, I requested a lot of things last year and it didn’t happen. This year, I got the things that I asked for, and the things I asked for worked for me. It made me happy, I’ve become a better rider all around, better test rider and more mature, too.”

Barcia got the win after a race-long duel for the lead, but not against well-established stalwarts, but instead rookie Adam Cianciarulo, who was making his 450SX debut. Cianciarulo was fastest in every practice and then led the main event after Barcia bounced off the track while leading. Cianciarulo made a mistake of his own, allowing Barcia to repass him. It wasn’t quite the storybook debut win, but second was still a heck of a performance. He wasn’t bummed at all with having handed the lead over.

“Yeah even after practice you still wonder where you fit in in a race setting. You have guys like Cooper, for instance, he can be fifteenth in practice but I think he could have a footpeg fall off and still finish on the podium. But I’m able to ride with Eli and ride with Ken, so I have an idea of where I’m at.”

Cianciarulo said while he might have had to calm himself down after winning Monster Energy Cup early in the off-season, and then after logging super-fast qualifying times all day, he is used to it because, well, he loves the sport so much he’s almost always really pumped up! He worked to keep himself in check, and said he tried to not to even look over at the other riders and just concentrate on himself.

“Yeah it’s quite a lot different,” he said of his first 450 main. “As a 250 guy you practice the longer motos, but race setting is always different, track breaks down more and with a gate start you start with a much higher heat race. But in the race, I didn’t feel that nervous, I actually felt more nervous in my 250 days.”

Cianciarulo and Barcia then exchanged jokes about getting sketchy and handing each other the lead.

“I made that mistake and kind of knocked the wind out of my sails, Justin came by aggressive like he always is, and honestly I didn’t want the smoke,” said Cianciarulo. “I settled for three or four laps, and I was thinking I was okay with second. A few laps to go I realized my trainer Nick Wey would yell at me so much for settling. But I am happy with second.”

As for Cooper Webb, the defending champ came into the weekend battling sickness and it showed during qualifying, where he was obviously off the pace, but he pulled it together for the main event.

“Yeah it was a tough day for sure, but sometimes that happens,” Webb said. “Practice wasn’t anything great, I think I was around fifteenth. But the heat went good, the main event I kind of plugged away. Just kind of rode it on in.”

If you thought Eli Tomac didn’t look like himself out there you were right. The Monster Energy Kawasaki rider seemed to have trouble coming through the pack after a poor start, and after the race Tomac told us he’d been suffering from arm pump and lack of comfort.

“I was kind of struggling with the same thing all day, just overall comfort,” Tomac said. “I never had my comfort all day, and to be honest, I got arm pump really bad. When you get that you’re just kind of along for the ride, and I was just kind of hanging out stuck in that position. That was frustrating because I saw the pack of guys in front of me, that three or four-guy battle a turn in front of me and I wanted to catch them but was never able to make that push. We learned stuff and I have to react and get better before next weekend.”

On paper Dean Wilson didn’t have a dazzling night, but considering he originally wasn’t even supposed to be ready for A1 after getting injured at the Monster Energy Cup, a thirteenth isn’t bad at all.

“I got hurt pretty dramatically and the goal was to ride by December. The time came and I wasn’t ready. My hip was crunching and cracking. I started riding again right before Christmas, so I’m really happy to be here. Qualifying, I was eighth in the first one and ninth in the second one so it was like, ‘Okay, not too bad.’ In the main I was in the mix on the first lap but someone got sketchy in the first lap and plowed me. I went from like last to thirteenth, so overall I can’t be mad at anything. It was a start and I’ll get better from here. I’m proud to even be racing.”

In the 250 ranks it was Justin Cooper who emerged as a first winner of 2020 after exchanging the lead with Austin Forkner, who nearly crashed while leading and had to come to a stop on the track just to recover. Forkner was later penalized two positions for cutting the track when he rejoined the race.

“I was putting pressure on Austin,” Cooper later explained. “I was kind of seeing where I was faster so I could make a pass at the end. He made a mistake earlier than I expected. I just tried to keep my gap and a steady lead for the rest of the race. I kept looking at the timer—trying not to focus too much on it, but it felt like a long race. To do it at this race, it’s a big race and that makes it even more special. I’m just going to try to stay on this high for as long as I can.”

“Last year was kind of my rookie year, I wanted to win, but I really wasn’t good enough. I was trying too hard and trying to make moves that weren’t there to take. I believe I can win these now with where my skill level is now, but it’s good to have the boost of confidence.”

Forkner had the following to say about his big mistake in the post-race press conference.

“I didn’t land right on them [tuff blocks], I just scraped my pegs until I stopped. I knew Justin would get by me, I didn’t know who was in third and fourth. Dylan got me, but I was just trying not to fall down. The bike shot to the left. If I would have turned around I would have been facing the track—I could see guys coming down the rhythm lane. I entered the track, I thought in a pretty safe way, and I let Dylan go back around. I slowed up. In those situations it’s hard to know the right thing to do. It was just a quick decision, I thought I made the right decision, but that answer will come from higher up than me.”

Forkner also spoke a little about having words with Cooper following the pair’s heat race in which Cooper made contact with Forkner and put in in the dirt when making a pass.

“I basically said, that’s a bold move for the first race of the season. I was mad about it. I should have just left it, but, whatever.”

Ferrandis was definitely fast all day, but a bad start in the main event ruined his shot at a win, although at one point he was reeling the leaders in.

“Yeah bad start again,” Ferrandis said. “I tried to move up, maybe tried too much, made some mistakes. I pushed and pushed, but I don’t know, I rode tight in the main event. I don’t know why, maybe because it was the opener. I’m not disappointed in my result, but more in my riding. But last year I started like this and won the championship. All lights are green, I just need to take the win next weekend.”

Michael Mosiman had a pretty solid night, initially ending up in fifth (he was moved up to fourth after Forkner’s penalty), but afterward he wasn’t happy with the way he rode, and even went so far as to refer to himself as a “super-squirrel” out there.

“I want to be better this year and I want to be competitive. I ripped a start from the outside in the main and we were battling pretty good on the start, but I’m so much better than how I rode tonight. I know the track was making everyone make mistakes, so that’s a little comforting, but I’m not very proud of how I rode. I’ve been riding really good in the off-season, and I’m capable of riding really well. I want to be better.”

Jacob Hayes had a decent ride, finishing eleventh, but when you consider he’s coming off an injury suffered in Australia it seems more impressive. Hayes dislocated his left shoulder and broke a bone above his humerus, and as a result only had about six days of supercross under his belt coming into Anaheim on a new bike with a new team, Gas Monkey Energy/AJE Motorsports.

“I got a good start in the main and fought my hardest. I was eighth for a little while and around eight to ten minutes and my body snuck up on me. I got tired and just fought my way to the end,” Hayes said “Troll Train [Alex Martin] got me at the end with one to go. I got eleventh, but I can’t be disappointed considering everything and how little time I’ve got on the bike. Twisted Development is doing the engine though, so it’s ripping, and I really like the Husky. I want to be fighting in the top five soon.”