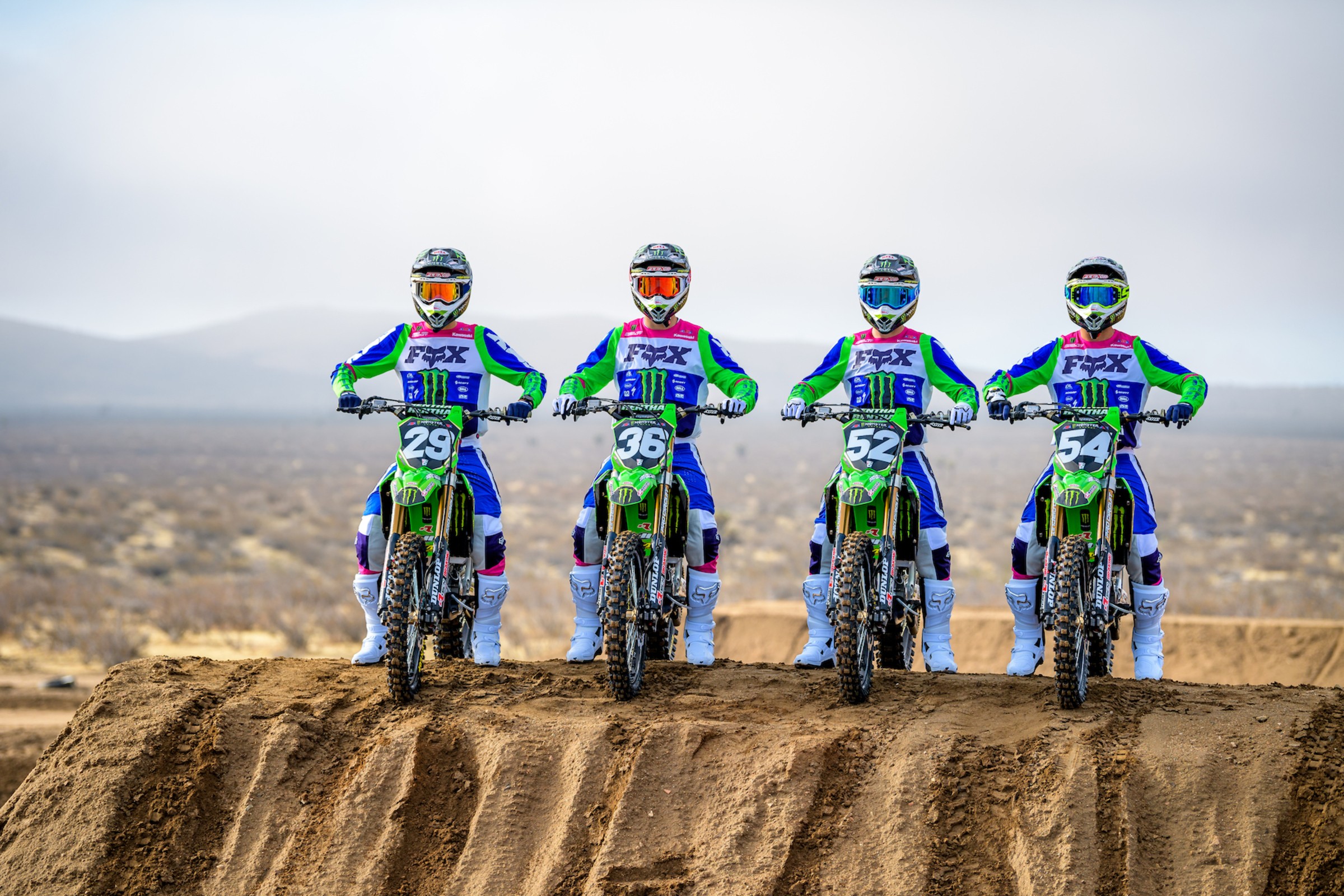 “Well, I think there is no doubt that [Austin] Forkner is the guy that we’re all looking at,” answered Jeremy McGrath when asked to look into a crystal ball and into the future of the 2020 250SX Regional Supercross Series “I mean he was flying last year. He just kind of did that rookie thing where he was a little bit careless and didn’t manage his technique a little bit and lost it in the whoops. I look for Forkner, obviously. I think if anyone was going to dominate, it’ll be Forkner. He’s also going to have to manage his speed and make sure he can do all these things without making mistakes.”

Certainly high praise from a high source. A winner of five of the six 250X East Region races he ran in 2019, the high flying Monster Energy/Pro Circuit/Kawasaki racer appeared to be a shoe-in for the east title before a practice crash suffered during practice at Nashville put him out of the season with a fully torn ACL. But now he is back, he’s rehabilitated and he’s ready, once again, to win supercross main events. Tapped at the eleventh hour to race the 250SX West Region Championship for Mitch Payton’s lime green dynasty, we tracked down Forkner who was getting his house in order for the short trek over to Angel Stadium on Anaheim. Enthused and in great spirits, Austin Forkner is ready to throw down.

Racer X: Austin, how was your New Year’s Day?
Austin Forkner: It was good. I did some riding and went to the store and I’m just getting everything set up for the season and A1.

Sounds like you’ll be lining up for the West Region come Saturday evening, huh?
Nobody has come out and said it yet, but yeah, I’m west coast.

You’ve put in all the work and now it’s simply time to get going with the racing and see where you and everyone else stands.
Yeah, I mean like last year I was kind of in the same situation I was ready and the team didn’t have me go and do the west. It was fine. I still ended up fine. Last year when they didn’t choose me to go west, I was pretty bummed. I was like, “Damn, I’m ready for the west. What am I going to do now for the next month and a half?” When you’re ready, you just want to go. You don’t want to start overthinking shit, you don’t want to get hurt, you just want to get out there and race. I’m ready now, or I’d be ready for east coast, so it doesn’t matter. I didn’t really care which coast it was. I know I can do good on the east coast. It’s whatever. I’ll be fine with wherever I go, so west is fine.

I spoke with Jeremy McGrath last week about both the 2020 250SX East and West Regions and he was basically singing your praises about making a run at a title this winter. Good guy to have in your corner, eh?
That’s good. At least I know that people think that I can do good. I do too. It’s just doing it, you know? I feel like I can do what I did last year. I don’t think it matter who I’m racing as long as I just do what I did last year.

Yeah, if it wasn’t for the nasty knee injury, the entire year could have potentially gone your way, huh?
Yeah, the knee is good. I mean it’s not the same that it was before, but they never are. It’s as good as it’s going to be. It feels good and it doesn’t bother me much at all unless I do a really long run or something. Other than that, it’s pretty solid.

A far as preparation with the bike, the team as well as your physical and mental conditioning, do you guys feel on-point? All things considered rolling into Angel Stadium tomorrow, is everything where you want it to be?
Honestly, I didn’t think we were going to be able to make the bike a lot better than last year because it felt so good. The bike was just really dialed. We just went a little bit stiffer for this season. That’s a good sign because the bike needs to be stiffer when you’re going faster. I’m not heavier than I was last year. If anything, I’m lighter, so that’s a good sign that the bike is stiffer. Hopefully I’m going faster! That’s pretty much all we did, really. I tried a bunch of different stuff and didn’t really jell with it and ended up settling for going with a stiffer bike than what we had. And the updates they did to the motor – whatever Mitch did to the motor – are really good. It was good last year. I think it’s a little better this year. I think the main thing for me is handling, but we’ve got that dialed. I think the bike is good and I feel good.

Obviously the races need to be run, but early on here in January, how are you sizing up your competition for 2020?
I mean I don’t really know 100-percent who is running each coast yet, but [Dylan] Ferrandis will be fast. He was fast last year. I feel like him and Adam [Cianciarulo] were the only guys last year that kind of had the speed to hang with me. They beat me at Atlanta. I don’t think Atlanta was my best race. I watched some of the races and at Atlanta I looked like I was riding tight. At other races last year, I was just better and faster. I feel like I could have hung with those guys better than I did at Atlanta. At Atlanta I was off. I just remember that night and I didn’t have the greatest day leading into the night show. Ferrandis will be good this year. He’s champion, but honestly, other than that, I just feel stronger than everybody else – even him and Adam. If Adam wouldn’t have thrown it away there at the end, he would have won the championship last year. It was kind of similar to me, so I feel good. Honestly? I don’t really care who I am racing. It doesn’t matter. I just have to show up and be the fastest. Obviously, there is going to be easier coasts, but I just have to be the fastest guy. Period. I feel good.

Confidence is such a huge part of it all. To that end, you sound confident and full-on ready to race. All systems go, eh?
Yeah. I mean my last memory of racing was me killing every everybody pretty much. That’s a good memory, I guess. I just kind of remember the speed I had and how I felt on the bike and stuff. And obviously the confidence that I had after I started winning races was really encouraging. I just try to keep that memory and not just sit back and be like, “Okay, I’ve got these guys covered. Maybe I don’t need to train as hard.” I need to remember all that from last year and know that I just need to get back to there. I just want to try and use all of it for motivation and confidence coming into this season.

Having more experience behind you in 2020 has to also fortify your confidence. Balancing out speed and aggression with a minimal amount of mistakes certainly adds up to a lethal combination. Thoughts?
Yeah, there is a reason why no rookie since [Trey] Canard way back in 2008 has won a supercross championship. There’s a reason for that. It takes a year or even two to figure it out. I mean no rookie is going to come in actually be ready and be dialed right away. You’re not going to be solid for a while. For me, last year was my third year. I’ve definitely made strides every year. First year it was a couple podiums; second year was a couple wins and podiums; and last year it was a lot of wins and all podiums. I’ve just gotten better, better and better. This year, if I can improve on last year, I don’t think I’ll have any problems at all. It’s just experience and more time riding supercross. You just kind of build up the natural instincts on the bike – you don’t have to think, you just do it. You really have to build that up for supercross. It definitely takes some time.

Can you do it? Can you win at Anaheim?
Yeah, I feel like I’m in for good races, wins, podiums and championships. Just like last year.