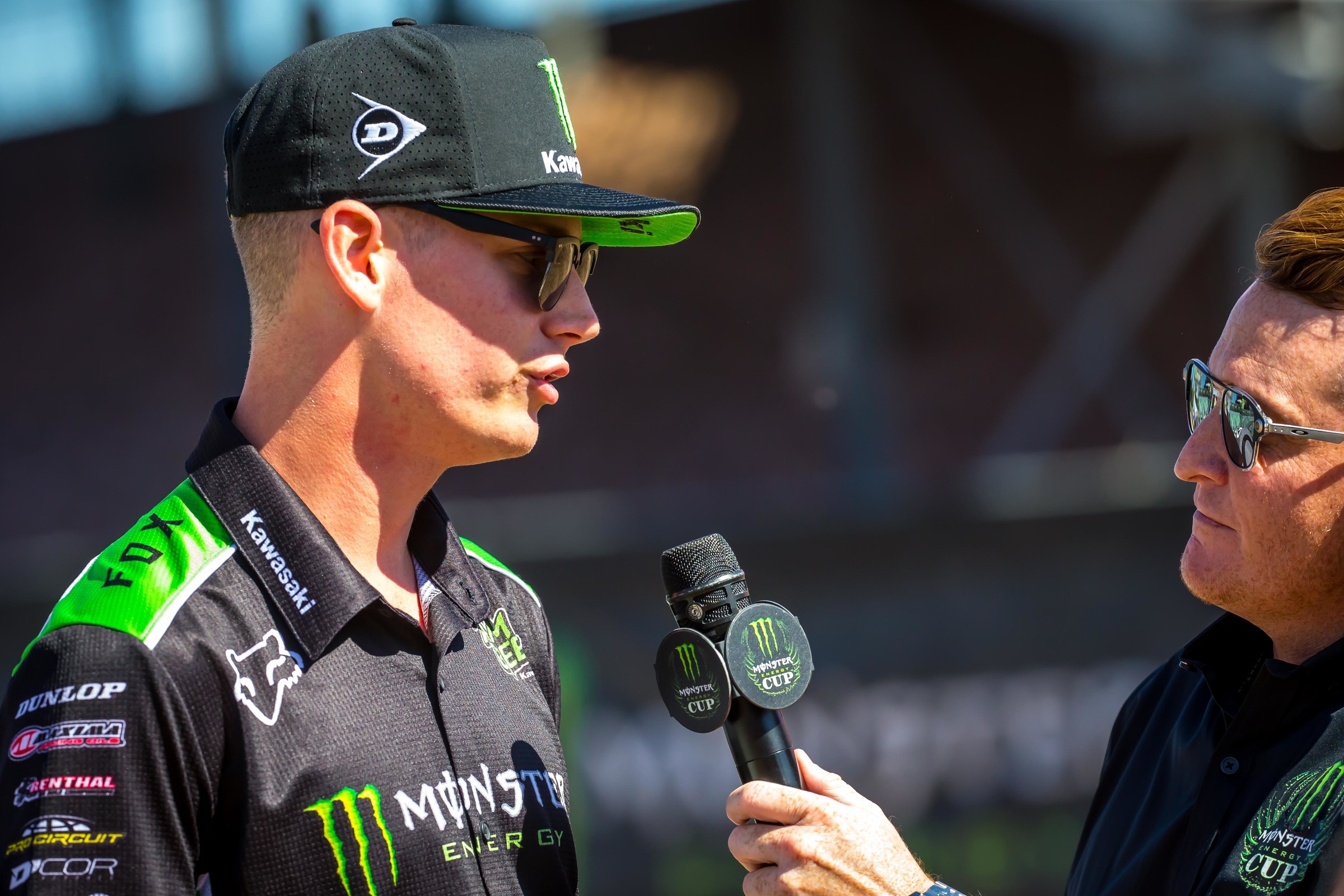 The New Year is upon us, Christmas is over, the gifts are open and it’s time to start looking over to 2000 Gene Autry Way and Angel Stadium of Anaheim. The Monster Energy Supercross Series racetrack that sits – damp dirt and all – inside the 45,517-seat baseball stadium will host Adam Cianciarulo’s first points-paying race in the big leagues of the sport. This weekend marks a date with fate that he’s basically waited his entire life for.

Cianciarulo’s win at the Monster Energy Cup only adds to the hype of his long-awaited rookie season on a 450, but he knows he must first make it to the races if he is to learn anything about his new bike and class.

“I think for me with this first year on the 450, first and foremost, I want to be at all the races, do all the laps, and just gain experience,” explained Cianciarulo, the 2019 Lucas Oil Pro Motocross 250cc champion, from his Orange County, California home. “I think the challenging part of it is how long the season is and how grueling the schedule is. Long season, a lot of laps, I think that’s all something that I’ll need to adapt to.  I’m riding for factory Kawasaki in the premiere division in the most popular racing series in the entire world. From that perspective, I’m just grateful to be here and I think it’s good for me to have the perspective that I do, as well.”

Racer X: Adam, what’s happening this week leading up to Angel Stadium and the opening round of the 2020 Monster Energy Supercross Series?
Adam Cianciarulo: Yeah, everything is going really good. Obviously, we just got through the holidays and this past week, it has been raining a little bit. I think everybody, really, has been scrambling for places to ride and all that stuff. Luckily, we had a productive week and just kind of put the finishing touches on preparation for Angel Stadium in a week.

I’ve known you since you were a little kid. On a 450 and on the starting gate at the Big A, it’s the fulfillment of a dream come true for you, isn’t it?
Yeah, absolutely. I think the whole experience in itself is something that I’ve looked forward to for a really long time, and really just to make it to this position is an accomplishment in itself even before the gate drops. To just have the opportunity to go out there and compete with the best guys and to potentially be one of the best, that’s what we all strive towards. From the opening ceremonies, to, just like I said, being out there with these guys and giving it my best shot.

Yes, your entire childhood, boyhood and young adult life has been centered on this precise moment in time, huh?
Yeah, I think the journey I’ve taken to get here is a little bit more complicated. Coming into the pros there were a lot more tribulations than I thought there was going to be, but at the end of the day I did make it to this spot and I’m here now and ready to challenge the best guys in the world. Yeah, it was definitely kind of weird trip to get here. If you think about it, for the percentage of amateur racers and dirt bike riders, it’s really tough to be in that higher percentile that does make it, and then it’s even tougher to be one of the guys that makes a good living it. The odds are really stacked against you, as they are in many sports and many other professions. At a young age you have to make the decision that you’re going to go all-in and you know it’s what you want to do and you’re going to try your absolute best for it. There is always going to be that chance that you fail, but just to be at this point and having made it to here and having accomplished some of the things that I have in a sport I truly love. Even if I wasn’t racing, I would be supercross’ biggest fan. Just from that perspective and to see where I am at now, it’s super-cool.

You’ve always been a straight-up fan and student of the sport. Perhaps more so than any other racer I know of…
Yeah, exactly. I was watching MC a lot back in the day and I still watch YouTube every other day watching some race from 2002 or 1997 or 2008 or whatever it may be. It’s cool that even though I have been through a lot of ups and down in the sport, and even though the sport has broken my heart a little bit, I’ve never stopped enjoying it; I’ve always had that fan aspect of it. Even when I raced in the 250 class and I’d be watching the 450 class, I’d I still get super nervous and excited to watch those guys race even when I didn’t have anything emotionally tied to it. It just goes to show that I’m still kind of in love with the sport.

And as you alluded to, it hasn’t been all wine and roses for you along the way. There were more than a few interviews and stories we did along the way where things sure as hell didn’t work out or go your way. Thoughts?
Yeah, absolutely. We’ve told that story a fair amount with the ups and downs. Yeah, even though it has been hard at times, you have to look around and realize that ultimately it’s a sport. Even though I love it more than anything, you kind of have to put it in that perspective to where you just have to persevere and push through everything. To have this ride with Monster Energy Kawasaki and to have a chance to go out there and be the best supercross [rider] in the world on any given night, you really can’t ask for much more.

And so far, so good.
Yeah, exactly. We obviously had a good end to my 250 career. So far the 450 career is off to a good start with Monster Cup and I think the training and the testing has been going good. You never really know until you get out there and race and there are 15 races and 15 different tracks in a row. It’s long season. We have a lot to learn. I’m just excited to get in there. I’m going to come in there with a lot of enthusiasm and a good attitude and just sort of see where we are at and just go from there.

The talent and skill certainly runs very deep in the 450 class.
Yeah, it’s crazy, man. If you just look at the entry list for Anaheim, it’s pretty unbelievable how much talent we have as a sport right now and it’s honestly great to see. I mean one through 20 is pretty stacked. For me, I’m not going to really look over my right shoulder or my left shoulder. I’m just going to focus on doing my best. I know that from my experience so far that I’m not super far off the pace by any means, so I think I can be competitive. For me, it’s going to be about adapting. For instance, the tracks deteriorate more than I’m used to at the end of the main events. It is weekend to weekend and making adjustments over the course of a long season. There are a lot of things that they’re going to be throwing at you, but we’re just going to have to adapt. If I do that to the best of my ability and I focus on myself and not let any outside influences kind of steer me off track, I should be up in the mix.

Can you do it? Can you win races and make a run at the title come Saturday night?
Yeah, I mean I know I have the capabilities of being the best. No doubt about that in my mind. But with that being said, you have to be realistic going in. No matter what, no matter where I’m at to start, it’s not going to change the belief that I have in myself that I can be the best no matter where I start. It’s not going to deter me from working my hardest and eventually reaching that point I want to be. Wherever I start, I need to be patient and let it come to me. Like I said, it’s a long season and half the battle is just making half the races. First and foremost, I want to be consistent and smart and just kind of take it from wherever I start and just try to get better. I don’t want to limit myself to a certain expectation. I believe that I’m capable of a lot, but we’ll just have to find out.

Hey, you won the last major 450cc race you lined up for. Leaving Las Vegas as the Monster Cup winner was certainly a confidence-inspiring feather in your cap, wasn’t it?
Yeah, Monster Cup was really cool. It was a super-fun race. I made my 250 debut as an amateur racer back in 2012 and then coming back all of those years later on the 450 and in the Cup class was really cool. The way the whole event shook down and with Eli and myself battling in the last main event was awesome. He probably had a little bit more pace than me, but I felt good in what I was doing and it came down to that last lap and the Joker Lane and it was so much fun to win it. I told my mechanic right after that had I lost that one, I think I still would have been stoked with how it all went down. It was cool and a great morale boost for myself and the team and I think it just showed that we’re kind of on the right track, but at the same time, leaving that race, you know you’re going to have to get a lot better as the season goes, but it certainly was a good starting point.

Nothing better than Anaheim 1, huh?
No, there really is not. I remember my first Anaheim 1 in 2018. I was so nervous just coming out to the crowd. It’s always sold out and I remember walking up to the starting gate for the first heat race and I’d never really been that nervous before. There’s something about the electricity in the air at Anaheim. I’ve been going to that race since I was 10 or 11 years old and watching all the guys. I just think it’s cool to kind of be on the other side of the fence now, if you will. These are the kind of moments you live for.