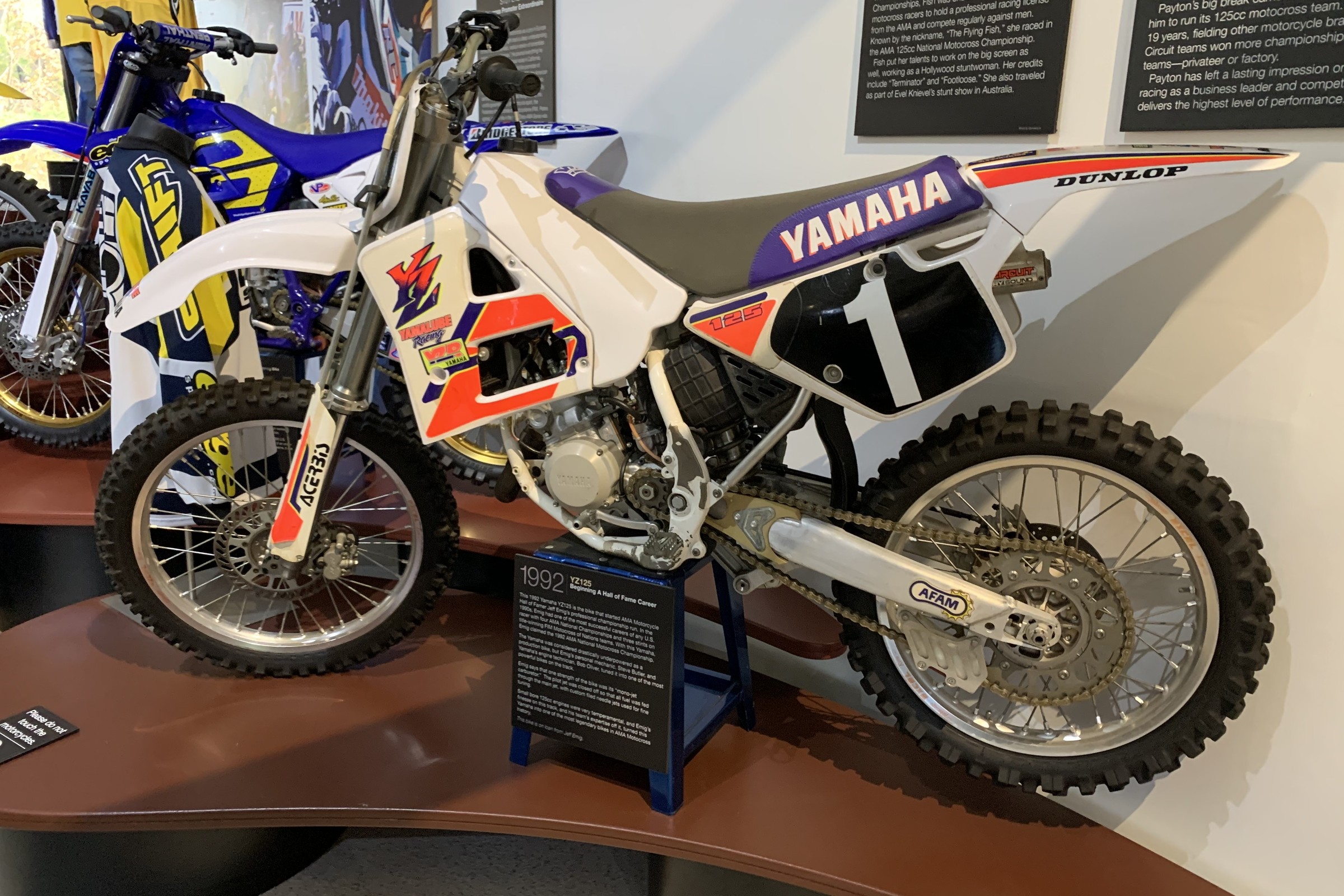 The AMA Motorcycle Museum is right next to the American Motorcyclist Association in Pickerington, Ohio. This weekend, the Hall of Fame will induct its Class of 2019, which includes motocross/supercross star Ron Lechien and the late off-road legend Kurt Caselli. The Hall of Fame itself will be open over the weekend, and it’s well worth the visit. It houses numerous old motorcycles and related memorabilia, including a handful of historic motocross bikes. For this List, we offer a preview of some of the bikes on display.

The bike that helped start it all, as far as motocross in America goes, is this 1970 Husqvarna belonging to Malcolm Smith. While Smith was more of a desert racer than a motocrosser, his star turn alongside flat tracker Mert Lawwill and the actor Steve McQueen in the film On Any Sunday helped start the dirt bike boom of the early 1970s, getting a generation of enthusiasts interested in motocross racing.

Danny “Magoo” Chandler is best known for his stunning wins aboard Hondas at the 1982 FIM Trophee and Motocross des Nations, but his legend was first minted aboard Maico motorcycles like this 250 from 1979. Chandler never won a major race on Maicos, but his wild riding style (and consequently epic crashes) made him a fan favorite.

This Kawasaki was built for Kent Howerton for the 1984 ABC’s Wide World of Sports Superbikers race, which the versatile Howerton won, outdueling Yamaha factory riders Broc Glover and Ricky Johnson in the made-for-TV spectacle at Carlsbad Raceway.

In 1973 Jim Pomeroy, just 20 years old, became an instant hero when he won the opening round of the FIM 250cc World Championships aboard a Bultaco. In doing so, Pomeroy became the first American to win a Grand Prix, the first rider to win a Grand Prix in his very first try, and the first man to win a GP aboard a Spanish-made motorcycle. But this is not the bike that Pomeroy rode that day in Sabadell, Spain. This is instead a 1974 Pomeroy replica Bultaco Pursang that harkens back to the glory days of Spanish brands like Bultaco, Montesa, and Ossa.

In 1975, Jimmy Ellis won all four rounds of the AMA Supercross Championship, a four-race series known at the time as the Yamaha Super Series of Stadium Motocross. The Can-Am was a bike made by Bombardier, a Canadian company; it also won the 1974 AMA 250 National Championship under Gary Jones.

Mike Kiedrowski won his fourth AMA Pro Motocross title aboard this Kawasaki KX250. Kiedrowski won his first championship in 1989 as a rookie aboard a Honda CR125, then switched to Kawasaki and landed the 1991 title in the same class, then won the 500 title in ’92—and then the 250 title in ’93 aboard this bike. The MX Kied is not the only rider to have won titles in all three classes, but he is the only one to do it over three consecutive years.

In 1985, Bob Moore won the first 125 AMA Supercross title in the East Region, aboard a Suzuki RM125. Then he moved to Europe to follow his dream of racing on the Grand Prix circuit. In 1994, he finally realized another dream: winning the ’94 FIM 125cc Motocross World Championship aboard this Chesterfield Yamaha works YZ125. Moore wore #76 that season, but the #1 plate went on the front of it after he clinched title. His ’94 title marks the last time an American rider won the FIM Motocross World Championship.

Another FIM World Champion was the late Donny Schmit. The Minnesotan was also a 125SX champ here in the States, but when he was left without a ride for the 1990 season, Schmit packed his bags and headed to Europe, joining Sylvain Geboers’ Suzuki team. Donny immediately won the 125cc World Championship on this works bike; two years later, he would add the FIM 250cc World Championship aboard a Chesterfield Yamaha. Tragically, Schmit passed away in January of 1996 after being stricken with aplastic anemia.

This 2000 YZ250 is the last bike Emig ever won on at the professional level, at the ’99 U.S. Open in Las Vegas as a privateer. A couple of big injuries after that race brought Emig’s career to an end, and he announced his retirement one year later in the MGM Grand Garden Arena—the very same place where he won his last race.

One of the rarest and most iconic motorcycles in the entire sport is this one-off, custom-built prototype YZM400F Yamaha four-stroke, which Doug Henry piloted to the win at the 1997 Las Vegas Supercross. It was the first AMA Supercross win for a four-stroke motorcycle.

This Kawasaki KX125 doesn’t belong to any particular AMA Motorcycle Hall of Famer, but it does represent Kawasaki’s vaunted Team Green amateur support program, which started in 1982. That’s also the first year of the AMA Amateur National Motocross Championships at Loretta Lynn Ranch in Hurricane Mills, Tennessee—and Kawasaki Team Green was one of its first sponsors.

The man with the most bikes in the AMA Motorcycle Hall of Fame right now is the GOAT himself, Ricky Carmichael. RC won ten straight AMA Pro Motocross Championships between 1997 and 2006, as well as five AMA Supercross titles in the premier class. Carmichael won his titles on a wide variety of motorcycles, starting out on a Splitfire/Pro Circuit Kawasaki KX125, then switching to the Chevy Trucks Kawasaki KX250 in 2000, then a Honda CR250 in 2002, and then a Honda CRF450 in the summer of ’04, before switching again to Suzuki’s RM250, before finally ending his career aboard a Suzuki RM-Z450. Even with all of those changes, he never lost an outdoor title along the way, and he won the AMA Supercross title on four different types of motorcycles. He was also the first to win the SX title and MX title on both two-strokes and four-strokes.

And finally, while not motocross bikes, check out these two Nicky Hayden tribute bikes, which you can still purchase raffle tickets for right here.

The AMA is raffling off a 2018 Honda CBR1000RR and a 2018 Honda XR650L, kitted out by Analog Motorcycles. For just $5 per ticket or $20 for five, you can enter the raffle and possibly get your hands on one of these motorcycles. The late Hayden was America's last MotoGP World Champion, and before that an AMA road racing and dirt track star. His name appears on the AMA's Horizon Award, given out each year to the most promising young athletes in various racing disciplines.

You can enter now by visiting americanmotorcyclist.com/hof/raffle-bike or calling 1-800-262-5646.

And here’s a sneak peak of the newest bike that will sit amongst the greats of the sport, Ron Lechien’s late eighties Kawasaki KX250:

Just getting her ready for the Dogger display at the AMA