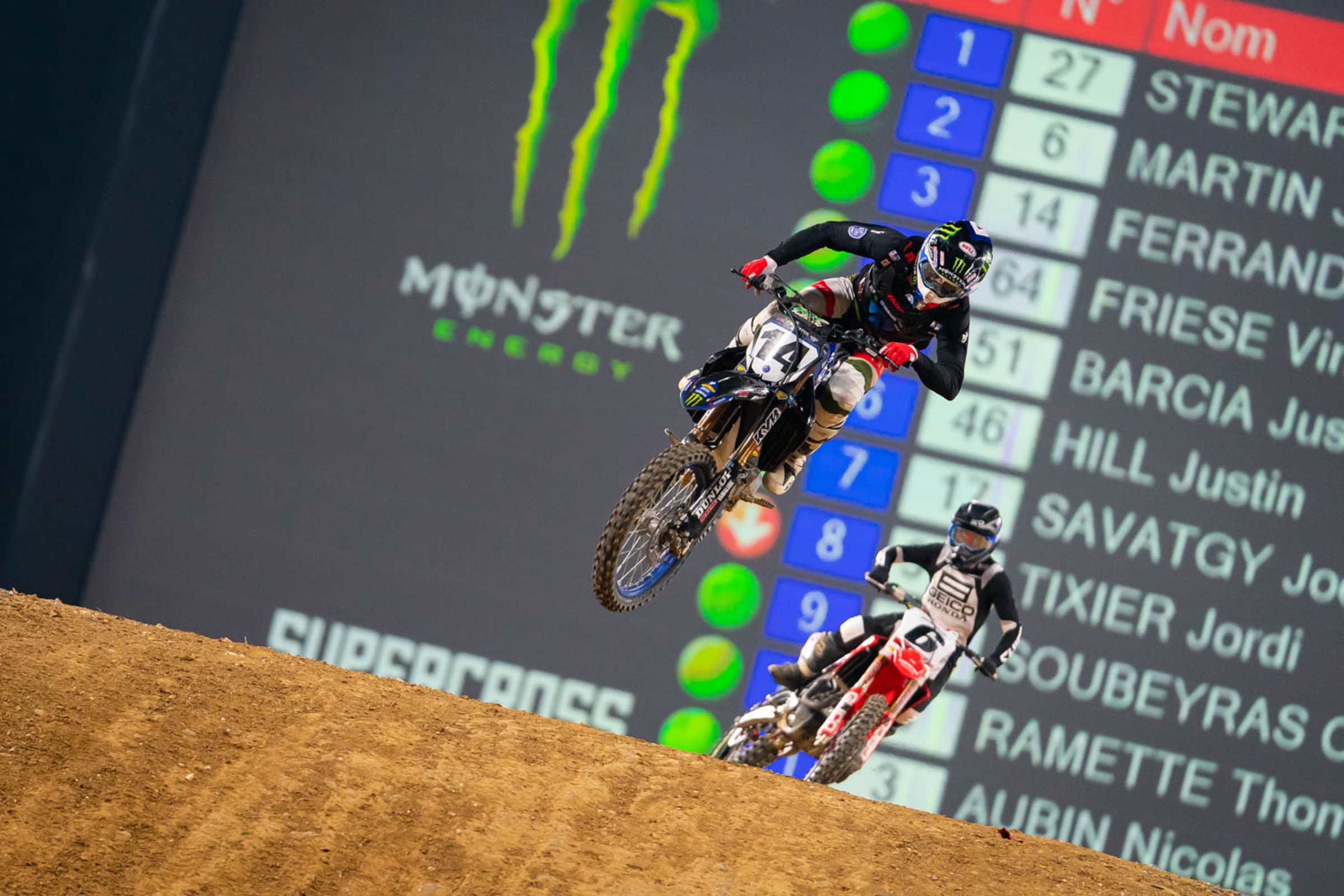 It’s all over here in Paris. Monster Energy Yamaha Factory Racing’s Justin Barcia became a three-time King of Paris champion with smart rides today going 4-2-3 today to take the title by five points over the overall winner today, SmarTop/Bullfrog Spas/MotoConcepts Honda’s Malcolm Stewart. Barcia almost got the win in the second semi-final when he ran down leader Dylan Ferrandis on his Monster Energy/Star Racing Yamaha all the way from eighth. He rode great and when Dylan made a mistake off the finish line triple, Barcia came inside and Ferrandis went down in a move that no one thought was like the old “Bam Bam.” From there Barcia was looking good for the win but Stewart took advantage of a mistake in a turn from Justin on the last lap and took the win. It was a very exciting race.

“Me and Mookie had some really good racing this weekend, so I think Geneva will be exciting for sure,” Barcia told us afterwards. “It was a great race. The track was actually pretty much American spec jump-wise, but obviously it’s small. It’s like 40-second lap times for 20-plus laps. It’s quite boring, but the racing was always close pretty much the whole weekend. Pretty exciting stuff.

To me it means a lot. It’s a special race. USA won the overall again this year. There’s a few French on there, but there’s a lot of USA. So it’s cool, man. It feels good. Obviously it doesn’t feel like at home win, but it feels good. I love Paris. I love coming here. I haven’t been here in two years, so it’s nice to be brought back. I hope to come back next year and win again.”

King of Paris wow... I’ve been working so hard this feels awesome! Great racing with the boys! Big thank you to @yamaha_france @yamaharacingcomofficial @longhorn301 @amberrosebarcia for the support! Back to work!!! ?? #3timeparischamp @supercross_de_paris ? @vitalmx

But on top of that, the riders came out for the Superpole contest first and it was Stewart who absolutely crushed the whoops and took the top spot and the cash for it. All day long Malcolm was on it and had his usual whoop speed happening. The early Superpole speed was an indicator it was there all day.

The first sprint final went to GEICO Honda’s Jeremy Martin, whose starts were on point all weekend. Martin, coming off a year a half of being injured, led every lap for the win. It was a short race for sure but it indicated that Martin can get back to his championship level speed sooner than a lot of people thought. Cedric Soubeyras got a good start in this one and caused a bit of a traffic jam behind him but soon enough it was SmarTop/Bullfrog Spas/MotoConcepts Honda’s Justin Hill grabbing second with Stewart in third.

In the third and final main event it was Martin again with a great start while Stewart wasted no time in getting to the front. Ferrandis, urged on by the home crowd, made up some time on Stewart before Malcolm regrouped and started putting some time back on Ferrandis.

Barcia was again not as good off the gate as he wanted to be and had to work through some guys, including Martin who he got with a nice pass inside the turn after the whoops. The final main of the night was probably the worst one of the weekend (lots of action in every other race) with Stewart holding a nice gap on Ferrandis and Barcia trailed behind both of them. JGRMX/Yoshimura Suzuki Factory Racing’s Joey Savatgy didn’t get the starts he needed on Sunday and crashed out at the end of the whoops. He walked off and even he could take some solace from some of the speed he showed this weekend with a couple of runner-ups.

“Second overall and in first just for tonight,” Stewart told us after the race. “It felt good. All weekend I felt really good, just had some bad luck on my side. First moto last night, me and Jordan Tixier got into it. Then me and Ferrandis did a front flip through the first turn in the last main last night. So again, really I was just like, I ain’t crashing no more. I already got enough battle scars as it is, so let’s just go out here and have fun. Really just put my head down and just clicked some good laps. I ended up third the first one and then won the second one. Kind of gave me an open window. I saw Justin [Barcia] and Ferrandis got into it on the last lap. I’m like, yeah, I’m going to take this. Then Justin made a mistake. Me and Justin been together all weekend, but it’s cool.

We showed a lot of respect for each other, just trying not to take each other out because at the end of the day we know it’s not just this weekend. It’s A1. We want to wipe the slate clean. We don’t want to start off with it. That’s a lot of hate for a lot of months.”

In the SX2 class it was KTM’s Brian Hsu who swept all three main events in some great rides. In fact, he led almost every lap and grabbed every start. American Jace Owen, riding a Honda, was a tick off Hsu on Sunday but did grab second overall.

In the end, Justin Barcia did what he had to do all weekend long as he was surrounded by chaos from the other riders to take the King of Paris title. Malcolm Stewart took second and Ferrandis third. This edition of the Paris Supercross really lived up to its billing with the riders pretty equally matched. We had four winners in six races, two different winners in the Superpole and all in all, a great time as no one got really injured.