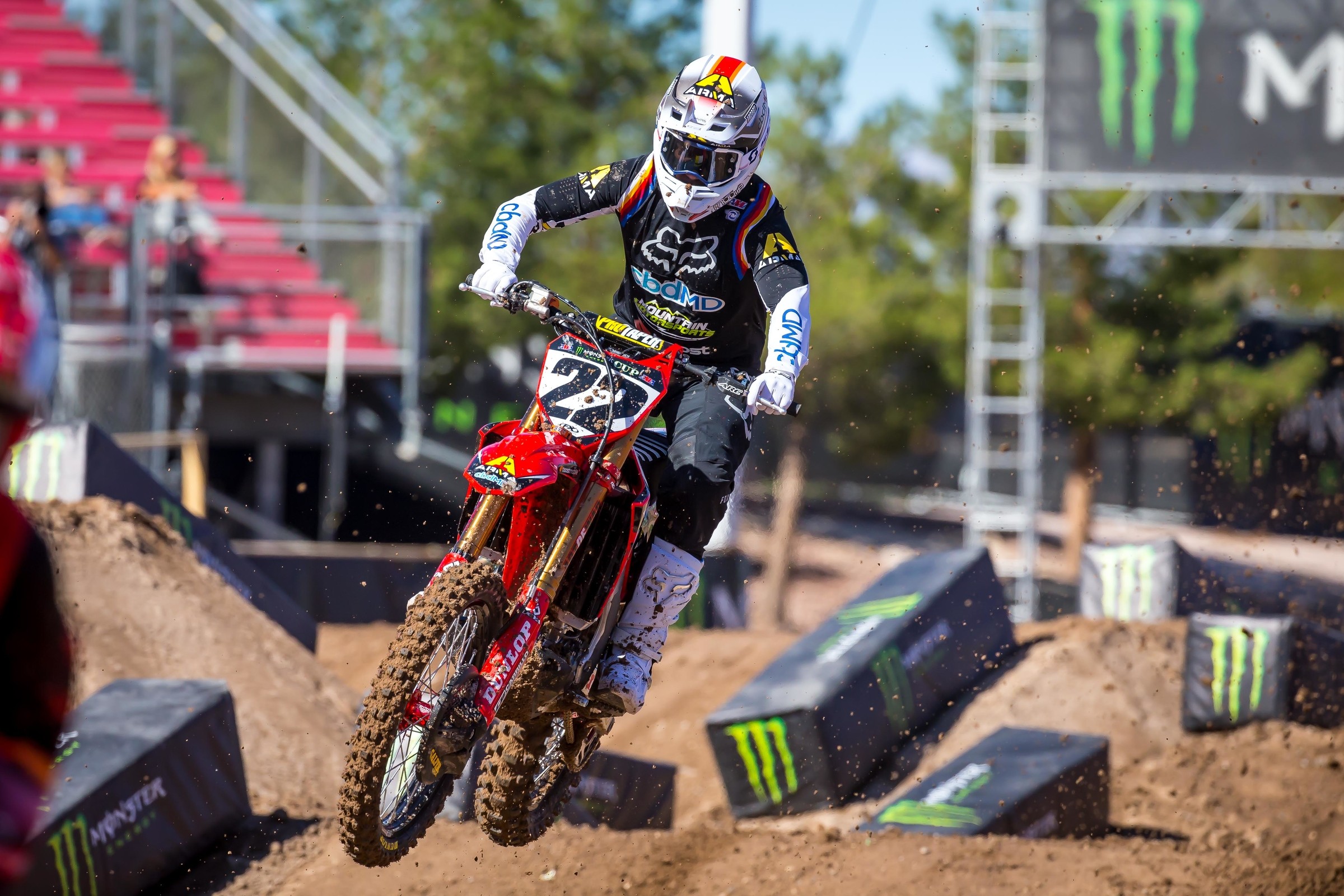 The Trifecta
If a rider wants to sweep all three main events at the Monster Energy Cup to earn the million this year he’ll have to do it on three different track designs. After running the track in one direction riders will race it backward. And in another race, the most important part, the start, will take place in a completely different location, outside of the stadium. No matter what happens, we’re guaranteed to see some variety this weekend in Vegas! –Aaron Hansel

Monster Payday
Eli Tomac cashed in big last year when his teammate, Joey Savatgy, held up in the final main on the final lap and allowed Tomac to sail by for the win. Tomac had already won the first two, and the sweep earned him a huge, one-million-dollar paycheck. He says he bought himself a sweet cabin in the mountains with the money! We know Tomac is fast enough to win the MEC for a third time (he won in 2016 too), but will he become the first rider to sweep the event and win one million dollars for a second time? –Hansel

Big League Debut
We’ve been waiting a long time to see how Adam Cianciarulo will look in the 450 Class, and this weekend we’ll finally get a glimpse when the 450 rookie rolls into Sam Boyd Stadium. Adam spoke about the new bike in the Friday press conference. “Honestly my first thought was, at Kawasaki we have our test track is right next to the I-15 freeway and my first goal was to not end up jumping out onto the highway itself!” joked the rookie. “We made it through that. The goal is always to win, right? But for me, I just want to ride with the guys, ride my best and see how it goes.”

Will this race be an indicator of what’s to come in 2020? Probably not—he’s relatively new on the big bike and still has over two months of riding and testing before the gate drops in Anaheim. That said, if he goes out and kills it on Saturday you can bet everyone will take notice. –Hansel

The Predator
After looking so good early in 2019 Malcolm Stewart crashed huge in Arizona and broke his femur. He returned to racing at the Montreal Supercross a month ago and was right in the mix against riders like Dean Wilson and Justin Brayton. He’ll make his return to U.S. racing this weekend at the MEC. It’s anyone’s guess how he’ll do, but if he comes into the MEC like he came into 2019 it’s certain to make this weekend’s racing more interesting. –Hansel

The Disruptor
You have to give credit to MXGP World Champion Tim Gajser. He’s got three FIM World Motocross Championships on his mantle and it appears his dream of racing full-time in the U.S.—which was highly rumored a few years ago—is no longer a topic. Tim’s got a great gig and a great career in Europe, so he doesn’t have to come to Las Vegas and prove anything to anyone at Monster Energy Cup. Plus, he tried this in 2017 and it did not go well, as he crashed almost instantly in the night show and exited the program quickly. –Jason Weigandt

Holeshot Money
The Monster Million for sweeping all three events gets the big headlines, but Toyota has put up $10,000 for any rider who can grab all three holeshots during the night. Three holeshots in one night makes for long odds, but yet Jason Anderson actually did it a few years ago and scored a Toyota truck for his efforts. That was nuts because Anderson had been struggling with his starts all season! If someone nails all three (different) starts this weekend, they’ll leave with an extra 10k to throw onto the blackjack table on Saturday night. –Weigandt

A Wild Card
It didn’t seem like a surprise when Justin Barcia won Anaheim 1 back in January, because at the time Barcia was considered a threat to win races. After that, though, the bottom dropped out of his season and he scored just one top five for the rest of the supercross season. Now he’s positioned more as an underdog threat, but in a race known for craziness, that could be the right fit. “Yeah, I feel a lot better than I did last year,” said Barcia in an interview earlier in the week. “The team has really stepped up a lot in this off-season. We’ve made a lot of changes with the bike and a little bit of personnel changes.” According to the interview, Barcia is thinking he can win. Is the 2012 Monster Energy Cup winner ready to prove it to everyone else? –Weigandt

Reedy Is Back
Here’s a new video of Chad Reed.

No, wait, that’s the trailer for the new Terminator move. See, you can’t kill Chad Reed. His huge crash at the Seattle Supercross, his foray into car racing, heck, even his old team (JGRMX/Yoshimura Suzuki) going into a holding pattern can’t stop him. Chad picked up some Hondas and whipped a Monster Energy Cup program together in two weeks! “We threw some parts on some bikes and here we are,” he said. “I just think the Honda is the easiest bike, it’s one of the most popular ones, you can go to your local dealer and throw some parts on them. As a rider you evolve throughout a weekend you try to evolve throughout the motos. That’s not going to happen since we have three different race tracks. I’m excited to go racing for the first time since Seattle, and now I have three different tracks to learn!” Reed’s past performances at Monster Energy Cup have not been stellar, and he’s certainly not at 100 percent prep. But you can never ever count out a man that’s can’t be killed. –Weigandt

The Comeback Begins
No one expected Jeremy Martin to race Monster Energy Cup. The GEICO Honda rider has been out of action since June of 2018 after a career-threatening back injury suffered at the Muddy Creek National. Then he suffered through infections, his first back surgery failed, and his entire 2019 season was supposed to be lost. But J-Mart has gotten back on the bike and decided to jump into the fray at the last moment. “Three back surgeries and a gnarly infection, but we’re here, we’re ready,” he said at the track on Friday. “It’s just been day by day with the rehab and the riding, and last week I was like, ‘I’m not feeling too bad.’ I want to get that Factory Connection Honda out there and pin it.” The number-one goal for Jeremy will be to get through the weekend healthy and just log laps in a race setting, but the fact that he’s willing to give it a shot so early shows how confident he is in his recovery. How quickly can he get back up to speed? –Weigandt

The Experienced Newbie
It’s almost weird to see Jett Lawrence’s name on the Supercross Futures entry list, because a few months ago the industry was buzzing over the young Australian’s pro debut at the last few Lucas Oil Pro Motocross rounds. He showed speed at the Rocky Mountain ATV/MC AMA Amateur National at Loretta Lynn’s, and his smooth style and hilarious interviews had everyone talking. Yet, Jett is actually just 16, and has yet to ride in any sort of supercross race. He’s working on it. “I had a week off after Ironman and went straight into supercross,” he said. “I’ve had Jonny O’Mara helping me, and so far only one big stack up. Haven’t gotten winded from any big cases, and my ankles are still good!” How will Jett perform in the all-star group of amateur riders competing in Supercross Futures? –Weigandt