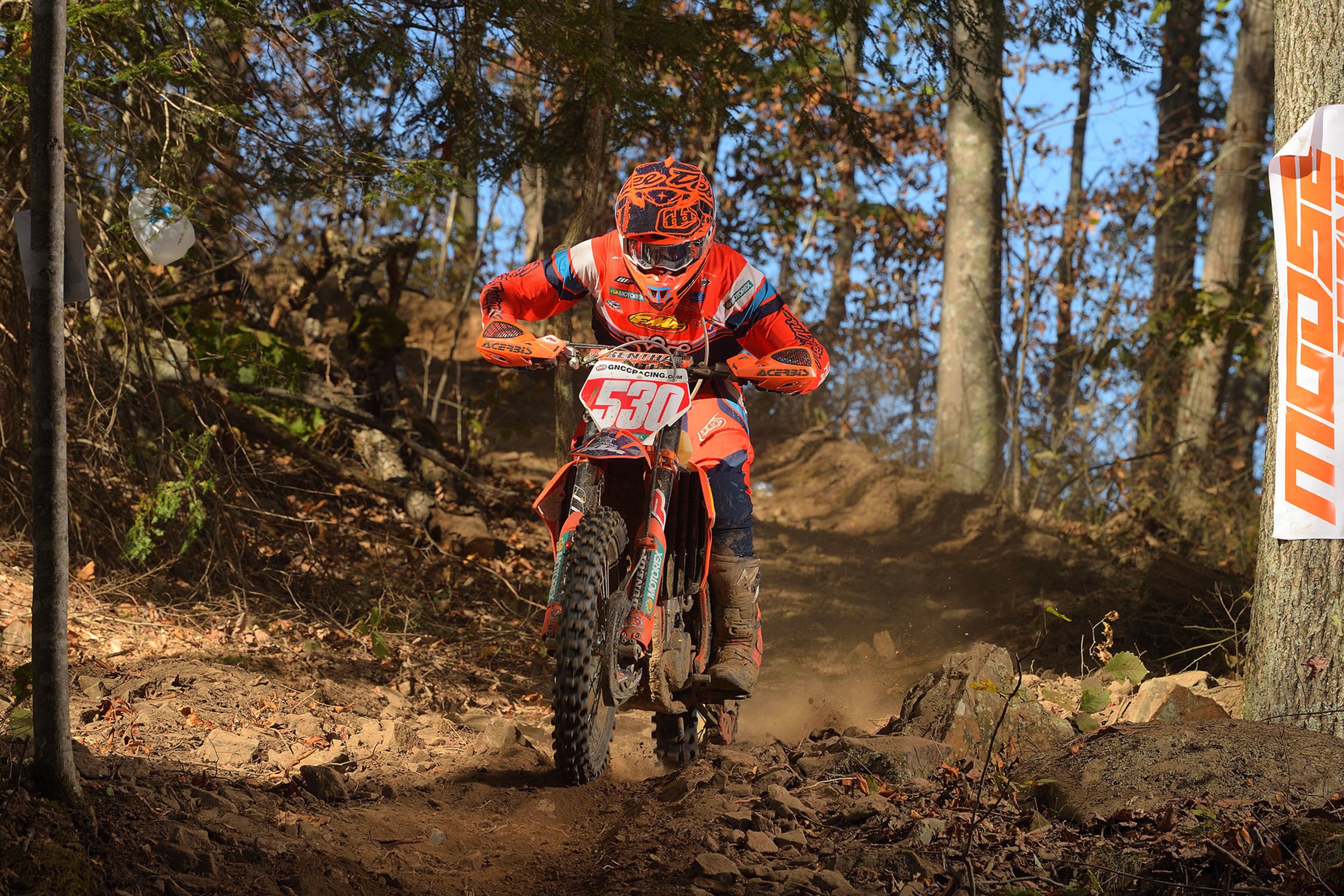 GNCC Report 4 Things We Learned at The Mountaineer GNCC

The penultimate round of the 2019 Amsoil Grand National Cross Country (GNCC) Racing season would prove to be one of the most exciting, action packed events of the year. The Summit Bechtel Reserve, a large facility owned by the Boy Scouts of America, played host to the event and provided racers with some rugged, technical terrain. This all-new event produced some of the most dramatic storylines of the year. Here’s what we learned.

It Was Over Before It Even Began

After a win at the previous round, Thad Duvall still had a mathematical shot at the 2019 GNCC National Championship. While it may have taken some bad luck from Kailub Russell, it still wasn’t completely over… until Tuesday prior to the race. Unfortunately, while practicing on Tuesday afternoon, Thad caught his foot in a rut and end up with a fracture as well as a torn ACL and MCL. This would ultimately take him out of the final two rounds and Kailub Russell’s 37-point lead would be enough to secure the championship before the race even began.

At the completion of the event, Russell would be crowned the 2019 GNCC National Championship but in an odd twist, Russell would actually be left scoring zero points on the day as he bowed out of the race on lap five. Russell ran in the second and third place positions through the first four laps, but suddenly called it a day and headed back to the KTM pits. Many were scratching their heads as to why. The obvious answer was that, yes, the championship was already secured but Kailub is not one to quit a race no matter what the championship outcome.

Later, Russell would mention that he suffered a practice crash of his own on the Wednesday prior to the event. The crash actually re-aggravated the shoulder he had surgery on last year and has left him in a bit of pain. As the race wore on, it became tough for Russell to keep control of the bike on a technical course, and with the championship secure he felt as if it would be smartest to end his day early. While it’s definitely not the way Russell would want to claim a title, there’s no asterisks beside a championship, as he had built a big enough points lead to give himself this cushion in the first place. The math says he’s now a seven-time GNCC Champion.

No GNCC event is easy. The long and grueling races pit man and machine against some of the most rugged terrain the GNCC track crew can find. While Snowshoe still stands out as the roughest and toughest GNCC event of them all, the all-new Mountaineer GNCC comes in a pretty close second. As mentioned, this event was held at the Summit Bechtel Reserve, owned by the Boy Scouts of America. This property was strip-mined many, many years ago, and then sat empty for about 30 years. It became a local riding hotspot, albeit it not exactly a legal riding area, until the Boy Scouts of America purchased the property several years ago.

With millions upon millions of dollars in improvements made, the facility now hosts the National Scout Jamboree and even hosted the World Scout Jamboree this year. This 14,000-acre facility is pretty impressive and the rugged woods made for a great event. Saturday’s ATV race would expose even more rocks than what the course already featured and made the course even tougher come Sunday. Additionally, another section of trail was added for the 1 p.m. Pro bike race, which featured tighter trail and a large rock garden that proved to be difficult, even for the best racers.

This rock-littered course would play a roll in the outcome of the race as well. A rider who wasn’t afraid to push the pace through the rocks would have a bit of an advantage, and this made things even more interesting as opening round winner, Steward Baylor led the majority of the race. Stu isn’t afraid to push the pace, which helped him claim the win at round one and he was riding very impressive at The Mountaineer as well.

It’s no secret that Ben Kelley has been making history in 2019 and he pushed that theme even further at The Mountaineer. In just his second start in the XC1 class, Kelley would claim the overall win, making history by claiming his first win in the fewest attempts ever. The day broke down to a long battle with Kelly against Steward Baylor, and the duo would be separated by just a few seconds through the final stages of the race. At one point during the final lap, they were wheel to wheel and only around one second apart.

Unfortunately, while many were expecting a battle down to the final corner, Steward suffered a mechanical issue with just a few miles to go. Kelley would be able to ride by and cruise to the win with Grant Baylor (Stu’s brother) in second and Josh Toth landing his second XC1 podium in third. Interestingly enough, these top three overall riders are the three who will make up this year’s Junior Trophy Team at the International Six Days Enduro! That definitely gives hope for a strong showing at this year’s ISDE.

This could be the beginning of an illustrious career for Kelley. He came seemingly from nowhere to claim back-to-back XC2 class titles, before moving into the XC1 ranks early one race ago and has already claimed his first overall win. The XC1 class tends to have a steep learning curve but Kelley has already shown that he has the potential to run the pace at the front of the pack. With a strong commitment behind him from KTM, moving to the factory squad in 2020, Kelley definitely has potential to establish himself as the next GNCC superstar.

While the focus remained on the front of the pack, the XC2 and XC3 classes both saw excitement of their own. Craig Delong has been a tough competitor in the XC2 class for a number of years now and while he’s been a consistent podium threat, he hasn’t claimed quite as many wins as he’s hoped for. He turned that around with a win at the Mountaineer, with Mike Witkowski and Ryder Lafferty rounding out the XC2 class podium.

Witkowski has been another strong contender in the XC2 class, actually sitting third place in the XC2 class points after twelve rounds of racing. Additionally, we’ve talked about Ryder Lafferty for the past few rounds, and he was finally able to break through for his first-ever XC2 podium finish at The Mountaineer. Both of these riders have a ton of potential and could very well become the next top contenders of the XC2 class. The rumor mills are rolling and early word is that both of these riders could be seeing slightly different support in 2020, which could very well push both of them to challenge for XC2 class wins.

In the FMF XC3 125 Pro-Am class, Jesse Ansley finally wrapped up his second consecutive XC3 class title at The Mountaineer. Ansley had been engaged in a year long battle with Cody Barnes, but unfortunately a knee injury took Barnes out of the past three rounds and Ansley ran away with the championship. In doing so, Ansley becomes the first repeat XC3 class champion, and now holds the most XC3 class wins. Undoubtedly, Ansley has established himself as the top 125 pilot in the GNCC series, even though he had some stiff competition from Barnes in 2019.