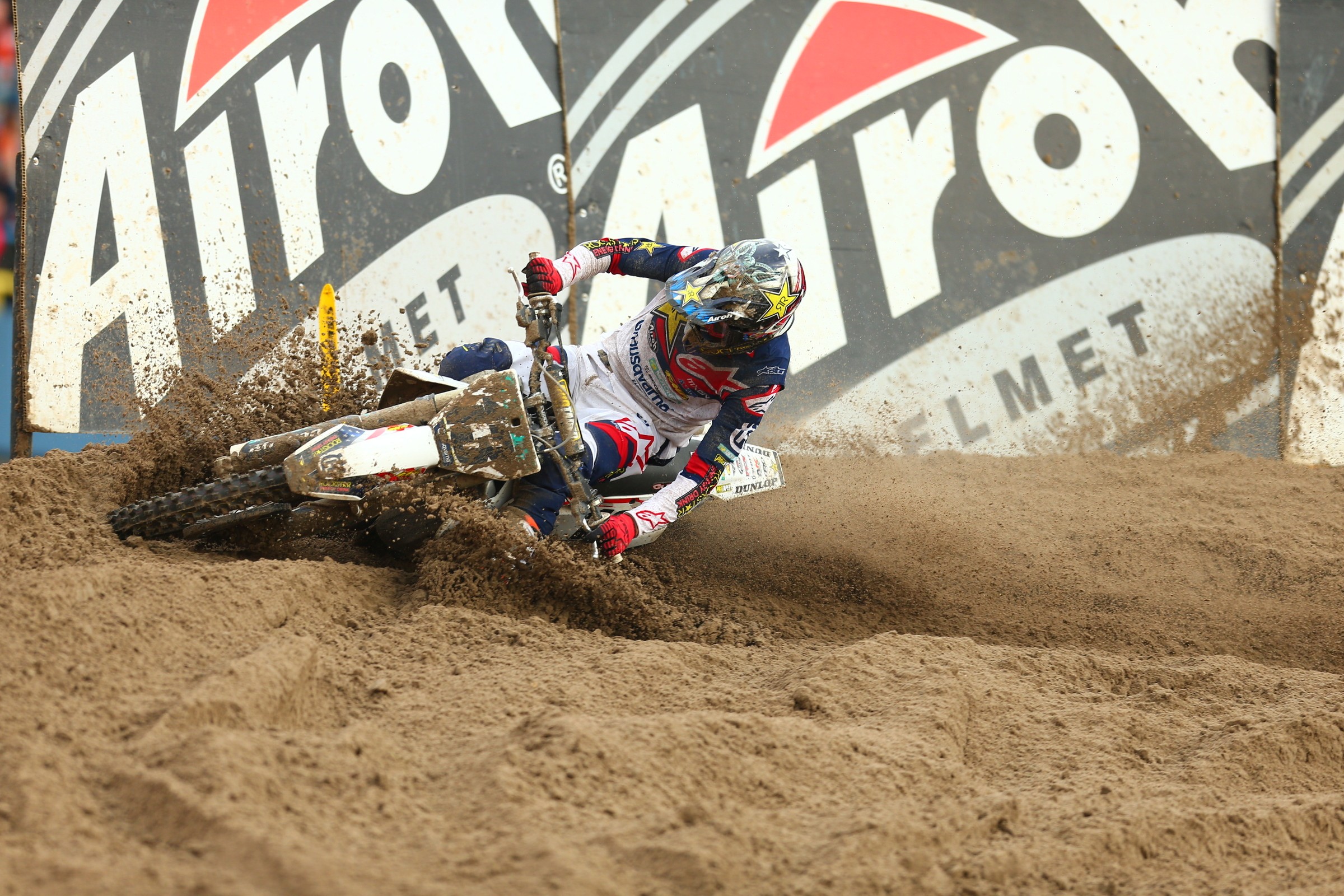 What We Learned On Day 1 of the MXoN

Assen has been the home of the Dutch Grand Prix since 2015 but the country and area of Drenthe has an age-old association with the sport. The Netherlands was the original host of this event, which is now in the 73rd edition. Here are some of the things we learned from a showery and blustery sandy ‘stage’.

Belgium, Netherlands, USA will go to the gate 1-2-3 (with five-times reigning champions France in seventh place) for the motos tomorrow: maybe jiggle the order but the qualification results should reflect the top of the standings come 17:00 tomorrow. The tale of how Jason Anderson, Justin Cooper and Zach Osborne have turned their off-seasons upside down in preparation for the sand and arguably Team USA’s hardest task since Lommel in 2012 is well documented. Judging by the team’s work from the 31st gate selections, Anderson’s 6th place in MXGP, Cooper’s MX2 win (even with a holeshot from the outside) and Osborne’s 8th (the score that was dropped) proves the extra homework has worked and put them in with a chance of silverware across a flat and specialised surface that was always going to be an uphill task.

Anderson switched-up the settings on his Rockstar Energy Husqvarna FC450. He’s working from the confines of the immaculate IceOne team that have earned wide praise as the chaperones and custodians of both Anderson and Osborne’s prep and programmes in Europe. The 2018 SX Champ overcame an abysmal gate pick – the dreaded but traditional and quaint ballot procedure – made early passes and rode to a lonely 6th; being picked-off by a charging Jeffrey Herlings in the last two laps. Cooper was impressive on the Star Yamaha. His holeshot allowed him to dictate the pace as he had in practice. The MX2 class features some excellent riders like Calvin Vlaanderen (very cautious for the Dutch) and world championship runner-up Thomas Kjer Olsen (part of a family effort for Denmark, with brother and racer Stefan in the MXGP division) as well as Jago Geerts to name a few, but in general the class has seen stronger years. Cooper’s intensity and mistake-free riding injected some extra impetus into the quiet optimism for the Americans.

The 22-year-old admitted to changing his lines and exploring the narrow and restrictive track with a view to the motos tomorrow. “I was pretty nervous before the start but I had a good jump. When I was in the lead then I moved around a bit and kept smooth. It is like beach sand; slippery and you had to look for traction. It’s a good racetrack.”

Zach Osborne was subdued in his Heat and will be looking for something more in his performance tomorrow considering the vast 1min 24 second deficit to former MX2 World Champion Pauls Jonass who deflected the attention of Belgian veteran Kevin Strijbos and took the chequered flag. Strijbos won his last MX of Nations moto back in Latvia in 2014 and clearly relished the temporary use of the factory Monster Energy Wilvo Yamaha compared to the stock YZ450F he’d been flogging for JWR through 2019.

Going to the line third tomorrow, Team USA stands a very viable chance of making it back to the podium if they keep churning the sand on Sunday. Conditions are expected to be even more challenging due to the poor weather forecast.

A noisy crowd cheered Jeffrey Herlings all the way from the depths of the top twenty up to fifth place in MXGP. Amazingly, the Red Bull KTM rider’s score was discarded with a relaxed Glenn Coldenhoff running to third in Open and Vlaanderen eventually making it to second in MX2. Herlings was just behind KTM teammate Jorge Prado; the Spaniard having holeshotted in normal fashion but dropped his new 450SX-F and tumbled down to fourth. “He was making small mistakes and it reminded me of last season when I was doing the same: riding the 450 like a 250 and taking 250 lines,” said winner Jeremy Seewer. The Swiss cited Assen as one of his least favourite tracks but admitted to enjoying the new, longer and fast layout. The world championship runner-up said the course carried more flow and was better for less bumps and more speed.

Herlings’ rate of progress was stifled by the equality of the surface: it is not as technical as past Grands Prix and had been packed hard to cope with the deluge of rain that is predicted to roll across the region on Sunday (and Saturday gave a couple of tasters).

Make no mistake, the Dutch might seem conservative in their Saturday efforts and allowed Team Belgium to sneak in with Pole Position thanks to the veterans Strijbos and Jeremy Van Horebeek (3rd in MXGP) but this is still their event to lose.

As a venue Assen breathes motorsport history. As a motocross site it is an exercise in shoehorning a track into a superb infrastructure, and good allowances for the fans with the massive, curving Geert Timmer grandstand. It’s a curious beast, with its imported sand, and is compact, tight and inconsistent in grip. Assen has seen rain before, as 2016 GP here was a washout but the course resisted.

It was flattened between motos today. Necessary work was made to the jumps and the take-offs, as Jonass thankfully pointed out, but the extra track maintenance was made with a view to the weather as well as recognition that nations like Cyprus, Greece, Croatia, Japan, Ukraine and other B-Finalists would not be able to cope with an overly battered and technical terrain. Easier, faster, safer: although the proximity of the asphalt was a constant worry and the crash for Akira Narita (injured knee apparently) showed the peril of getting it wrong and wide.

Then, late Saturday evening, the rains hammered Assen and the state of the sand tomorrow will throw an extra element of chance into the mix. It will be the third MXoN in a row to be weather-hit.

Injury, logo and team selection disputes: it hasn't been the easiest period for Team France in their aim for a sixth crown in a row. Gautier Paulin was eased out of third position overall in MXGP at the last round, Jordi Tixier was thrown-in into the role of last minute replacement again and Maxime Renaux, the logo space on his cap uninhibited, is arguably a year ahead of his development cycle after a decent first term in MX2.

Today, there was little to indicate that the French could shock the Dutch, equal the consistency of the Belgians or outshine the Americans. Paulin may have won on the Valkenswaard sand two years in a row and with two different bikes but he has yet to register a top three finish at Assen in MXGP. He was eighth today and surprisingly behind Sweden’s Filip Bengtsson. Renaux laboured to 10th in MX2 and Tixier wasseventh in Open but recovered well from an early race fall.

In contrast, the form of Australia with some new names mixed with the old - Kyle Webster, Regan Duffy and Dean Ferris – were the surprise package of the day. They will find themselves sliding those distinctive gold and green liveries into the gate with some illustrious company tomorrow.

While Herlings and Coldenhoff have yet to show the extent of their claws, Saturday at Assen was more about the story of the individual – Jonass, Seewer, Tim Gajser (second in MXGP), Prado, Strijbos, Shaun Simpson (fourth in Open). Strijbos aside, there were not too many implications for the overall team ranking in what was an opening day of intrigue and scene-setting. All we really learned is several teams that were expected to be strong have shown those expected strengths. Throw in all the rain that is hammering the track, and it could be a very unpredictable affair tomorrow.