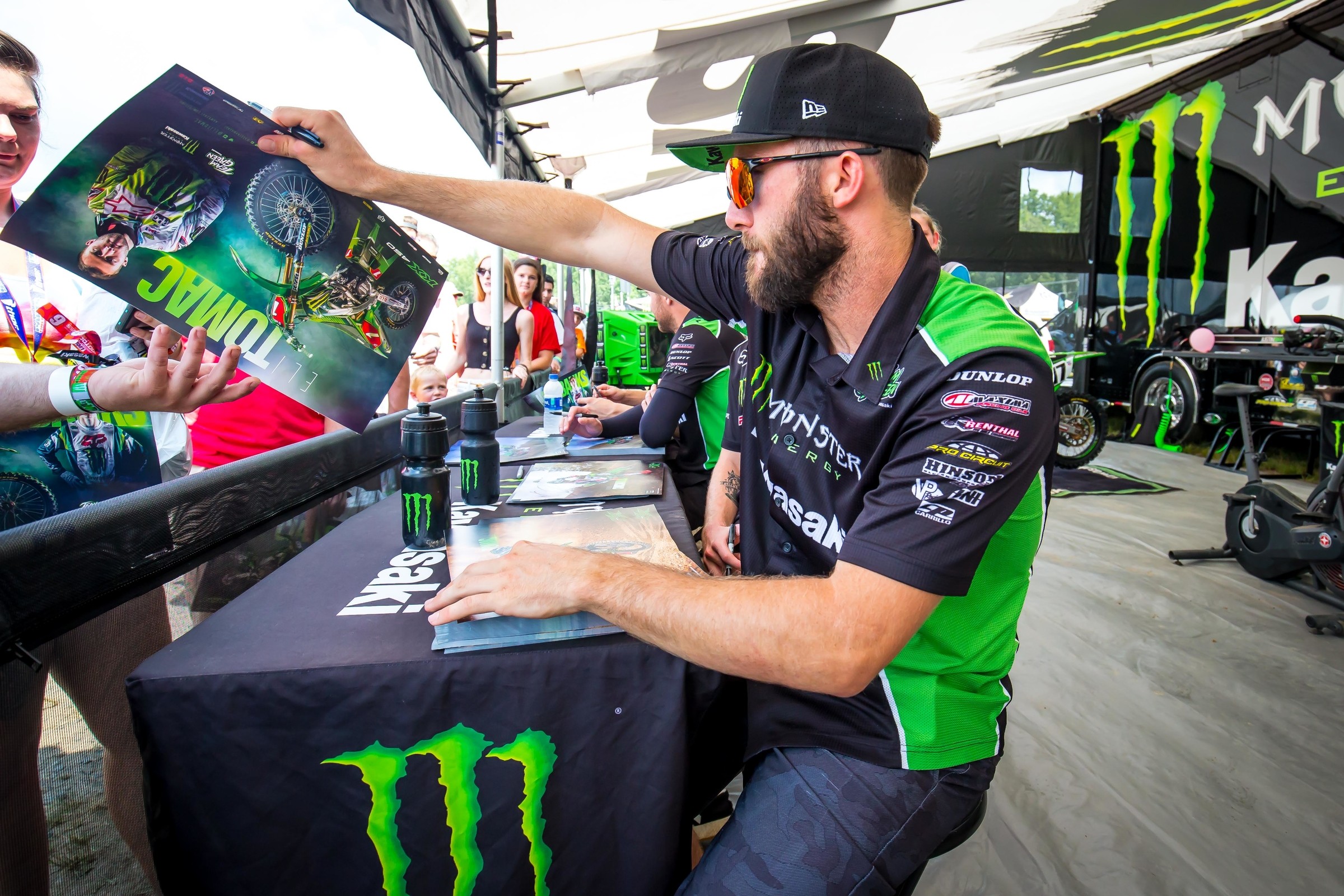 “This such a special way to end the weekend, and not something I really anticipated happening with one round to go,” smiled Eli Tomac last Saturday afternoon in Mechanicsville, Maryland after being told he had just clinched his third consecutive title in the 450 Class of the Lucas Oil AMA Pro Motocross Championship. “I honestly didn’t even know I had the championship until the last lap.”

With his 1-1 day and everything behind him sorting themselves out, Tomac became only the fourth racer in American motocross history to complete three straight premiere class titles. His third double moto sweep and tenth moto win of 2019, the Monster Energy Kawasaki rider will line up for the final time in 2019 this afternoon at Ironman Raceway in Crawfordsville, Indiana, signaling the end of the veteran’s tenth year in the sport.

On Friday afternoon, Eric Johnson caught up with Tomac.

Racer X: Right on, Eli. Thanks for taking the time out to do this on what I know is a busy Friday for you back in Indiana.
Yeah, sorry I didn’t get back to you right away. I dropped my cell phone earlier and it blew up and I had to replace the screen on it. I’m back now!

Check this out. I went into the Racer X Vault and counted up every AMA pro race you’ve ever competed in. Counting backwards, and including Saturday’s race in Indiana, you have competed in 232 races. Looking back to Hangtown on May 22, 2010, when you won the first AMA race you entered, what do you think? You’re a full-on veteran these days, huh?
Wow. Well, the first thing that comes to my head is that it’s almost scary how fast time goes by. Yeah, I do feel like I have been in the sport for a while now, but at the same time, it’s like it has all flashed before my eyes. Like you say, 232 races, it hasn’t felt like that. There have definitely been more good years than not so good years, so it has been a good ride so far.

A decade into your professional career and you have four Lucas Oil Pro Motocross Championships to your name in the AMA media guide. Not bad, huh?
Yeah, I guess you could say it’s a pretty good record for outdoor championships. I mean I’m at the point now where I’ve accomplished things that I dreamed of as a kid. For it to be reality is pretty awesome.

Do you feel like a veteran? In doing some research before I phoned you up, I noticed that you truly have been at it for quite a while now. Like you have mentioned, it has gone by fast, hasn’t it?
I mean, that’s the thing: Everything is happening so fast. I don’t think all of that will really settle in until I’m done racing. At least that is the way I am right now. I feel like I kind of take it weekend by weekend. I just go racing. I really don’t try to put myself way up on a pedestal, you know.

I’ve always admired how you have set up your entire racing program in Colorado. It’s been your approach all along and it certainly seems to work well for you. What’s your take on that?
Yeah, we’ve definitely done it our own way. Everyone has got the program that works for them and what is going to work for one guy might not necessarily work for the other. A lot of the time, yes, it will help you going to a certain place or having a certain program. You have to look at what fits you and what makes you comfortable during the week, but at the same time, you still really just want to push and do whatever gives you the right mindset. You have to believe in yourself. That’s the probably the biggest thing to it all—just having the confidence in knowing you can go win.

Yes, some motocross fans may not realize that when a rider at your level goes to the starting gate, he has upwards of ten to 20 other people riding along with him. What I mean by that is that it takes a hell of a lot of time, money, and effort to send out a world class factory rider doesn’t it?
Yeah, and it’s everyone combined. There are so many things that happen before the weekend to get everything there and to make sure the bike stays together. I mean like it is in every form of motorsport, it’s all a huge team effort.

I saw that you didn’t really realize you were going to clinch the Lucas Oil Pro Motocross 450 Class championship at Crawfordsville until the very last lap of the race. A pleasant surprise, eh?
It was a pleasant surprise. I didn’t know I had it until the last lap there. I came around and [Brian] Kranz (mechanic) threw up the board and it said 3-time champ. I was like, “Wow! No way! We actually did it!’ I was actually a 48 or 49-point spread at the end of the day, but we hit that 50 right on the mark and it was a pretty good feeling. It was the feeling you wanted!

You’re now only the fourth U.S. racer to win the premier 450 Class three seasons in a row. Something you may have daydreamed about as a kid in Colorado, huh?
Yeah, now that I have been doing it for ten years, it’s hard to even believe right now. Having those three years go as good as they did, gosh, it’s pretty unbelievable, really.

Over the past three seasons your consistency has been amazing. Furthermore, you’ve kept your health and have very rarely missed a race or a moto. That all a huge part of your success as well, isn’t it?
Yeah, that’s what is so hard about our sport. We’re also riding a lot during the week too and that is something most people don’t see or realize. There is always risk. There is the risk at home and there is always the risk of mechanical failure. No matter how good all the bolts are tightened, that’s just part of motocross. That’s what is so special about getting these three titles in a row. We stayed healthy and we’ve had a terrific team effort   and that’s what makes it all possible. It’s all pretty unbelievable.

Okay, I have to ask about the Motocross of Nations. You’re not competing at Assen, Holland. Did you want to do the race?
That’s a double ended sword, as always. I would love to be the guy who beats the world. That’s absolutely something that I want to do and would still like to do, it just didn’t happen this year, you know? I’m basically on the same stance as our Kawasaki press release. It wasn’t really even an option for me. It’s something I’m not putting out at all. Hopefully we’ll back in the future.

Well, if anything, you can take on recently crowned MXGP World Champion Tim Gajser at the 2019 Monster Energy Cup, huh?
Yeah, it’s good to see those guys come race over here. Not many of them race in our series or against the AMA guys. It will be good to have a GP guy in the mix at the Monster Cup.

Next Team Tomac mission: the Monster Energy AMA Supercross Championship title?
I know. We’ve been so close. Supercross, that’s one thing that keeps me up at night [Laughs]. You know I felt like it was literally right there in front of me. We didn’t get it again in 2018, but I was a little bit goofy. Two thousand nineteen wasn’t quite as dominant, but we were still winning races and we were more dominant  towards the end of the season. Once again, you have to be the dominant guy, but you have to have that consistency. Gosh, it’s all about consistency and being the dominant guy. It’s hard, you know?

It would be a nice accolade for the career of Eli Tomac, wouldn’t it?
Oh absolutely. I feel like that’s one big empty spot on my list of goals and dreams to accomplish. I’m going to be hungry as ever to go get it in 2020.