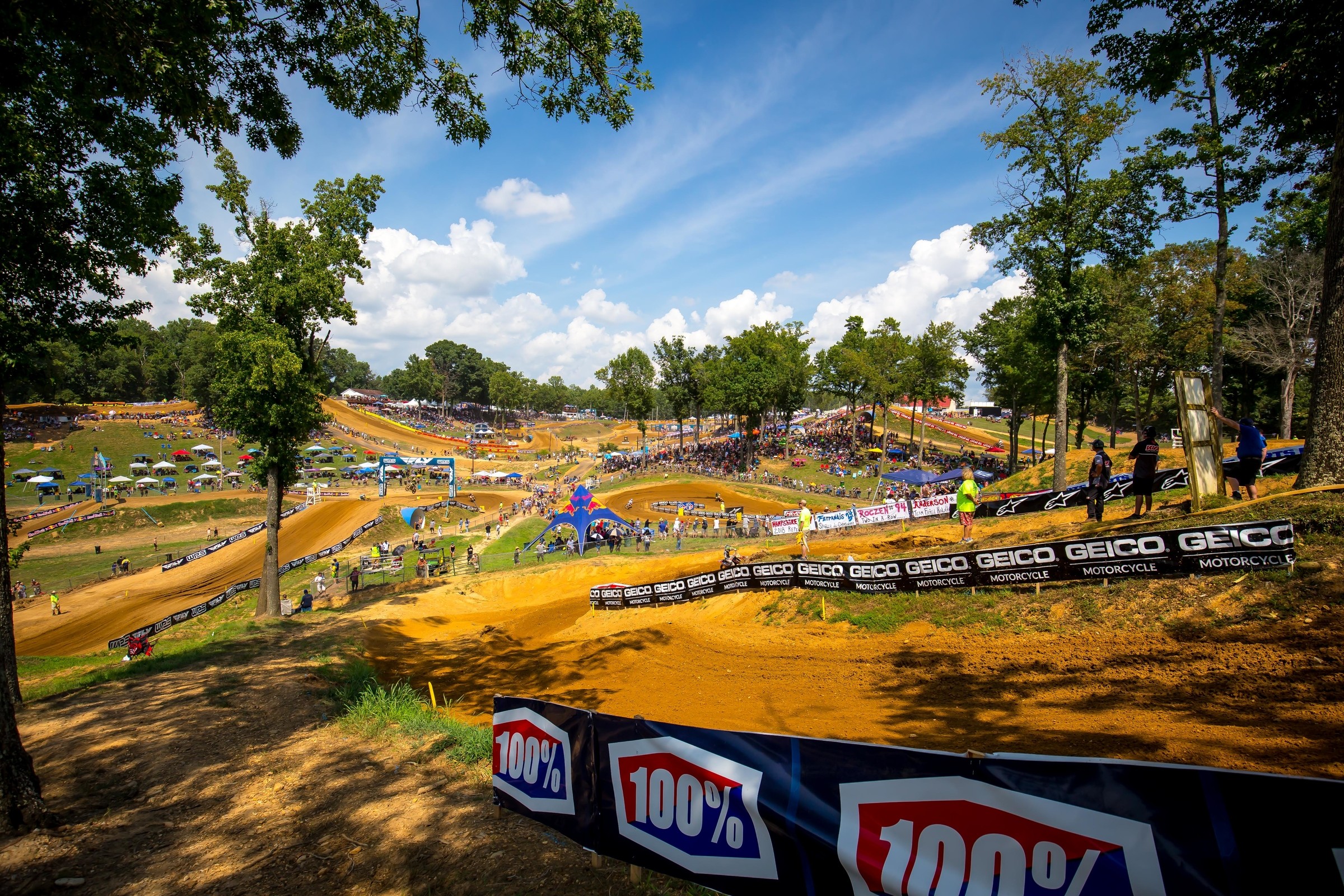 I realize this column is a bit late. Hey man, I had obligations with Yamaha (content coming up on this site and Pulpmx.com tomorrow) on Tuesday, Monday saw some Canadians come to town early and Sunday, I had to work on a feature that was past-due for the next Racer X magazine. So, yeah- sorry not sorry but OBS was the victim this week.

That doesn’t mean I don’t have some random thoughts on random topics though, so lucky you, here are some things I thought about from Budds Creek and more.

1. I think that Monster Energy Kawasaki’s Eli Tomac clinching his third 450 Class title at Budds was an amazing ride by an amazing rider. We had seen Eli falter a bit at Unadilla (a ride he attributed to using a fence post pounder thingee during the week) but at Budds, with the temperatures and humidity high, he rode off with two relatively easy moto wins. It wasn’t really in doubt either moto and with the win and title, Tomac moved closer to being one of the all-time greats. He became Kawasaki’s all-time winningest rider during this year which is pretty crazy. I mean, Jeff Ward rode for them for, like 17 years, so that’s really saying something.

Also, Eli’s top ten and climbing in all-time in 450SX wins, he’s fourth in 450 Class wins, and he’s got four total national championships. We, and I include myself in this, don’t realize that we’re watching history here with Tomac. I’ve been saying it’s stats like the above that make his rides in 450SX and a few 450 Class motos over the years a bit puzzling. The Ryan’s, RC, MC, Stew (although he crashed a lot and we don’t talk about post-suspension Stew, that was a different guy) just didn’t have the inconsistency that Tomac has at times. But you know who did? The guys in the '90s. Go look at Jeff Stanton’s results, he was a six-time premier class supercross and motocross champion and sometimes, he just got sixth or seventh. It happened a lot back in the day but not so much in the last 30 years. Guys like McGrath and RC really changed the standards.

Any way you want to slice it, Eli Tomac is one of the greats of all time and if he keeps this pace up (and I mean, why wouldn’t he?) he’ll probably get a 450SX title (if there’s any justice in this world) and a crap ton more 450 Class wins and titles. RC, Stew and MC are, to me, the top three riders in history. I don’t want to hear how Stew doesn’t have the titles. He’s got enough of them when you combine all his wins to be up there. Villopoto has eight titles, Dungey seven…if ET gets to seven, does he get past the two Ryan’s (he’ll probably have them both covered in wins if he gets to seven titles)? These are things that I think about.

2. By the way, I think that whenever we talk about the all-time greats of the sport we need a separate category for the great Jean-Michel Bayle because he just wasn’t here enough. Almost 70 percent of the time he raced 450SX, he made the podium which is one of the best percentages of all-time. So just like all things JMB, he was different and we need a different stat category to talk about him. He literally only raced full-time in the U.S for three seasons.

3. I think that Monster Energy/Pro Circuit Kawasaki’s Adam Cianciarulo will win his first national championship this weekend in Indiana but then again, I also thought he was going to win his first supercross title in Vegas this year. AC’s been so good in motocross this year, if Ferrandis goes 1-1 at Indiana (very possible by the way if he can get his starts back) then Cianciarulo needs to get 21 points total to win…or something like that. (For more in the 250 Class championship math, read "Insight: Championship Scenarios" here.) Seriously, AC can go 9-9 in his sleep so an injury or bike issue would be the only way he doesn’t clinch this right? RIGHT? Oh man, if Adam doesn’t bring this thing home there might not be thick enough pads for the walls of his home.

4. Speaking of Eli Tomac and Adam Cianciaculo, it’s been 14 days since THIS PR from Kawasaki dropped. I knew for awhile that Kawasaki would not be doing this race, but since the PR dropped I have been trying to track down Kawasaki head of racing Bruce Stjernstrom to expand on this PR, talk about the reasons why and more or less try to bring our private conversations to a public forum. Anyone who listens to me knows my stance on this race: the timing doesn’t work for our riders/teams for many reasons, it’s expensive, nobody gets paid really anything much while, looking around at the past twelve MXoN’s I’ve been to, it seems that someone is making a lot of money at this race and it ain’t the ones that put on the show. There is minimal payback for an MXoN not to mention the shit riders take from “fans” if they don’t win.

I reached out to Bruce to expand on Kawasaki’s decision and got, “For 2019, the team has specific off-season plans, which are team confidential, for both of our riders. It is that simple and there is nothing more to read into it. As always, we will consider MXoN invitations on a year by year basis.” So there you have it, there was no expanding on the PR and going into more detail on the whys and hows of the decision by Team Green. I mean, I applaud the decision by Kawasaki to issue a PR to deflect from AC and ET, but I would’ve liked to get into the specifics of the situation with Bruce to allow fans a peek into the stresses and costs of this race for the riders and team. C'est la vie I suppose.

5. I think I’m fine with Kawasaki going or skipping the race, in fact I’m fine with whatever teams or riders want to do because this race doesn’t work for the USA-based folks and it seems that, although Youthstream could help with the scheduling, they won’t. If I was the powers that be at Team USA, I’d tell Youthstream that Team USA will not be attending this race until they either get help in terms of moving the date up or get help with expenses for the team or even guarantee that the race will be here every three or four years. Something, anything, to help a team that helps generate a lot of ticket sales for this race and whose very presence makes this race WAY more interesting.

Also, while we’re all throwing our hands up at Kawasaki with fake outrage about them not going, the promoters of the race seem to be getting away with the fact that what they call the biggest and most prestigious motocross race of the year is a flat road race track with a bunch of sand dumped on it. Hardly what “motocross” really is right?

6. I think I got both sides of the PR battle this week regarding Cameron McAdoo’s deal to ride for Monster Energy/Pro Circuit Kawasaki in 2020. I had heard some things from someone close to Cameron this past weekend at Budds and said as much as I could on the Fly Racing Racer X Review Podcast from Budds Creek. Well, I got a call from someone who works with the Troy Lee Designs/Red Bull KTM team the next day and told me their side of the story. I’m not sure why McAdoo didn’t sign with the team he currently fills in for, but Pro Circuit’s a nice landing spot for him and he got a bit more money as well. KTM is, I think, going to regret not getting him a deal sooner. The real winner is McAdoo who was a fill-in with GEICO Honda in the 250SX West Region this year and was then left with no ride for the Lucas Oil AMA Pro Motocross Championship before the Troy Lee Designs/Red Bull KTM team picked him up. He has ridden very well, and so he went from not having a ride to two teams fighting for his service in 2020! That’s all due to his hard work and perseverance. TheTroy Lee Designs/Red Bull KTM team did land a nice consolation prize in Brandon Hartranft though, I like Brandon and he’s going to get his first shot at an OEM factory 250 team which will elevate his performance, I think.

Thanks for reading this mini-OBS, good times indeed and we’ll wrap this thing up this weekend in Indiana! Email me at matthes@racerxonline.com if you want to chat about this or anything else.