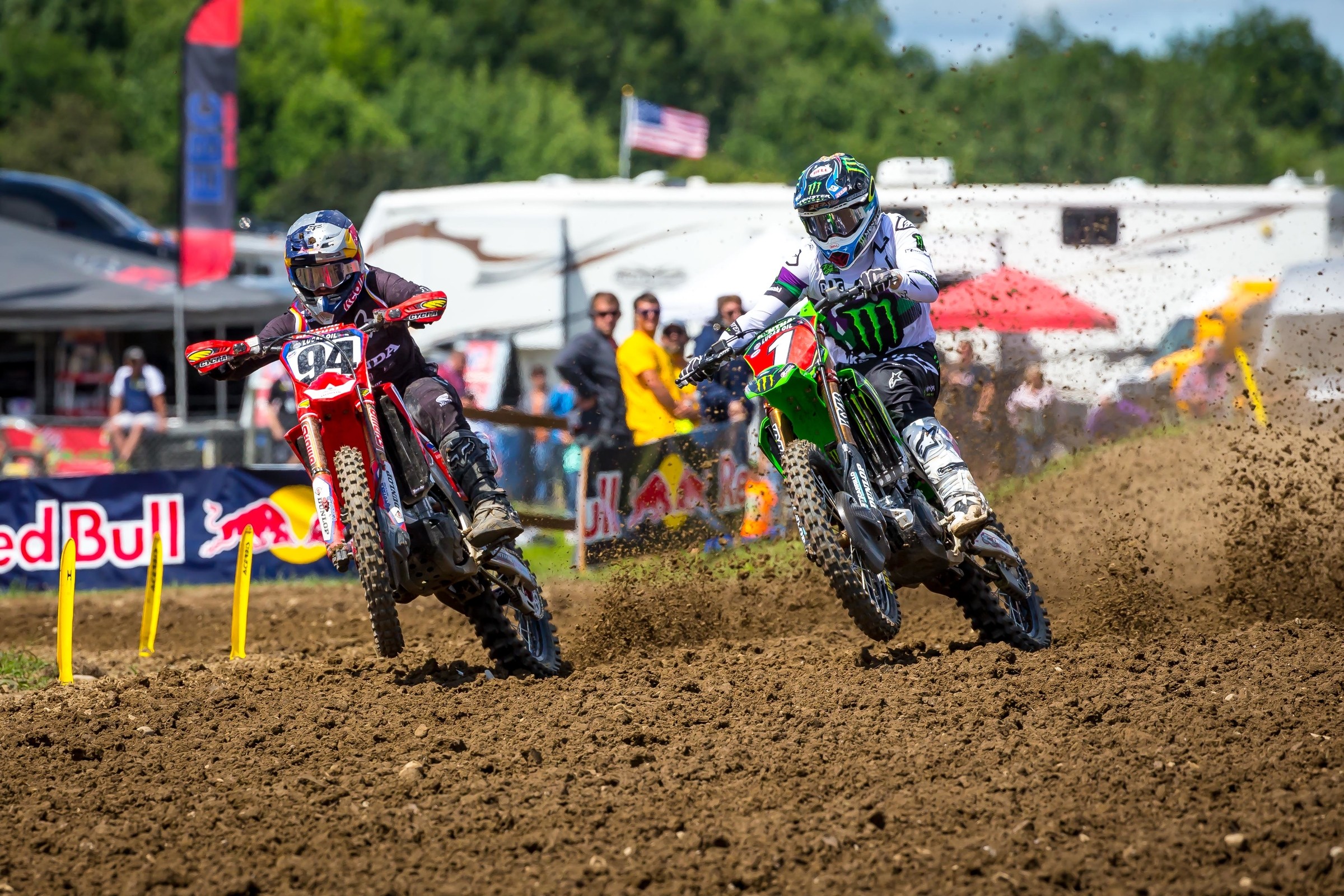 Ken Roczen had already recorded a pair of overall wins this season before going 1-1 at Unadilla, but it’s been quite a while since the HRC Honda rider has been perfect on race day. In fact, you’d have to go all the way back to Roczen’s 2016 championship season, when he won all but four motos, to find the last time he went 1-1. “The last couple of days I was just talking about having a perfect weekend, and for whatever reason I put that in my mind and it seemed to work out today,” Roczen said afterward. If he brings that same mindset to Budds Creek it could spell trouble for 39 other riders.

Let’s face it, Eli Tomac is probably going to win this thing. But that doesn’t mean there isn’t any motivation for the rest of the riders to earn as many points as possible, especially Roczen and Marvin Musquin. The two are separated by just a single point for second place (Musquin has 386 and Roczen has 385), and if you don’t think finishing as high as possible in the standings is important to them you need to change helmet brands because what you’re wearing right now obviously isn’t working. And, of course, there’s also an outside chance either one could still win the title. Who’s going to leave Budds Creek with possession of second place?

We won’t waste time rehashing how great of a season Zach Osborne’s been having. He’s been great and everyone knows it. What we don’t know yet is whether or not he’ll get an overall win before this thing ends. He’s certainly capable—he’s been on the podium and even won a moto at Southwick. He’s also one of two riders (Blake Baggett is the other) who’ve won a moto but not an overall in 2019. We’ll see if Osborne breaks through at Budds Creek. If he does, it’s likely he’ll take over fourth in the points (he trails teammate Jason Anderson by five points).

The year 2019 hasn’t been a banner year for Justin Barcia (although it hasn’t been terrible), but we got a glimpse of what he’s capable of in the first moto at Unadilla. Barcia put in a great ride, including a tremendous battle with Dean Wilson, to end up third. Unfortunately Barcia went down in the second moto (a product of charging too hard and tucking the front, Barcia said), which limited him to tenth in the moto and sixth overall, but that third place is definitely forward motion for “Bam Bam.” We’ll see if he can do it in both motos this weekend.

Before Unadilla, Tomac was sporting a 50-point lead over Musquin, but thanks to a 7-3 day last week his lead shrunk to 40 points. That’s certainly no cause to hit the panic button, but it’s going to make it harder for Tomac to wrap up his third consecutive Lucas Oil 450 Class Pro Motocross Championship at Budds Creek. If he puts ten points on Musquin and eleven on Roczen, which doesn’t seem very likely, he’ll seal this thing up early. He’ll also need to avoid giving up 41 points to Anderson and 46 to Osborne, but something tells us that won’t be a problem for Tomac.

There are just 100 more points up for grabs, which means anyone facing a deficit in excess of 100 points to championship leader Adam Cianciarulo has been officially eliminated. That leaves only Dylan Ferrandis and Justin Cooper in the running to challenge Cianciarulo. If Cooper, who trails Cianciarulo by 59 points, doesn’t make up nine points on Cianciarulo this weekend, he’s officially out of the hunt. Ferrandis is 28 points back, which means he’ll probably take this championship down to the final round. That said, if Cianciarulo somehow separates himself from Ferrandis by at least 22 additional points, which could happen if Ferrandis encounters bad luck or mechanical problems, he’ll clinch the title at Budds Creek.

Every year Unadilla marks the point when young amateurs dip their toes in the professional end of the pool. This season it was the likes of Jalek Swoll, Jett Lawrence, Jo Shimoda, and Carson Mumford took the leap, although Lawrence and Mumford are slated to return to the amateur ranks next year. Mumford went 16-20 for 20th overall, crashes relegated Shimoda to 36-35 for 36th, Lawrence crashed in the first moto but came through the pack in the second to go 21-8 for 13th, and Swoll went 22-19 for 23rd. With Hunter Lawrence returning to the championship this weekend after injuring his collarbone before Washougal, we'll get our first glimpse at Jett versus Hunter. Swoll won’t be at Budds Creek due to complications from a previous injury, but the rest of the rookies will. Now that they’ve got the experience of racing pro under their belts it’ll be interesting to see how they do in their second attempt.

Whether you’re a fan of Cianciarulo, Ferrandis, both, or neither, you can’t help but be pumped on how the last two races have played out between the two. The second-moto battle at Washougal was unreal, and the fans at Unadilla were treated to a repeat performance. In fact, the two were even close on the stopwatch in the second moto, with Cianciarulo’s and Ferrandis’ fastest laps being separated by a thousandth of a second! Ferrandis’ fastest lap was a 2:19.002 and Cianciarulo’s fastest lap was a 2:19.001—on the same lap of the moto as well! The title depends on how they ride, and they sure have been racing like it. If we’re lucky, we’ll get to see yet another epic duel at Budds Creek.

For sixth place, that is. Chase Sexton and Alex Martin are both gridlocked for sixth with 254 points each as we head into the 11th round, and while a battle for sixth in the points might not seem like the most exciting thing to keep track of, it’s fights like this that can present an added degree of interest to a moto, especially if someone is running away with it up front. So remember, if Martin and Sexton find each other on the track, they’ll be battling for more than just position in the moto. We’ll see who takes over sixth this weekend.

It’s no secret that getting a good start is a huge part of having a good race, but it’s not everything. In fact, a quick look at the holeshot numbers might surprise you a little. In the 250 Class, points leader Cianciarulo has only logged three holeshots in 20 motos, while third-place Cooper has seven! And Ferrandis? He’s got just one! In the 450 Class Tomac has just two, while Cooper Webb is credited with six. With both points leaders holding solid leads (Cianciarulo by 28, Tomac by 40), a holeshot isn’t imperative, but getting one and checking out would help their championship causes in more ways than one. Let’s see who gets to the first turn first at Budds Creek.