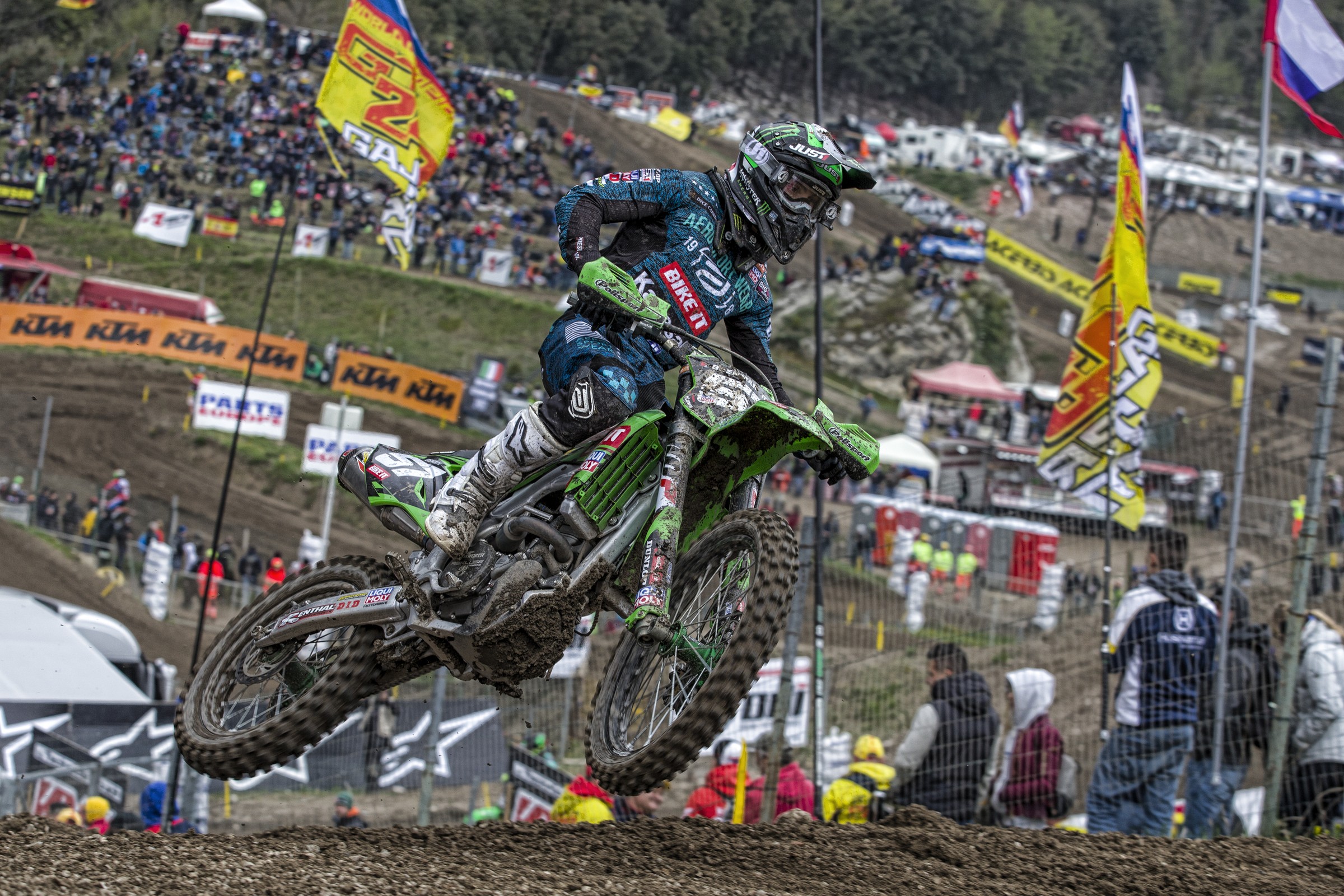 Two days removed from the running of the MXGP of Belgium at the sandy Lommel circuit, Darian Sanayei was sitting in his Flemish Region apartment Monday evening watching Netflix when this writer sought the 23-year-old out to get a read on how the 2019 MX2 World Championship has been treating him. Between trying to bounce back from Epstein-Barr virus drama and getting a troublesome knee injury out of the way, the globetrotting motocross circuit has been rough on the native of Monroe, Washington.

A member of the Bike It Dixon Racing Team Kawasaki outfit who has been gaining critical mass during the last two GP seasons, ’19 has been unkind to Sanayei, his first top 10 moto score not coming until round six at Portugal. Undaunted, Sanayei has kept at it, looking to gain momentum at the final four Grands Prix of the season in Italy, Sweden, Turkey and China. An American racer hasn’t won an FIM Motocross World Championship since Bob Moore back in 1994, but it’s straight-up easy to see that Darian Sanayei is giving it everything he’s got.

Racer X: Right on Darian, so what’s happening this evening on the outskirts of Lommel, Belgium?
Darian Sanayei: Yeah, I have an apartment here in Belgium. It’s in Lommel, just 10 minutes south of the track. I rent from one of the other team managers, Jacky Martens (Note: The 1993 500cc Motocross World Champion). So, yeah, I just rent it all year. I’m not here all of the time – sometimes I’m England and sometimes I’m in California. It’s good to have a little base here, for sure.

You’re on your own, living in Belgium and you’re competing in the MX2 World Championship. You’re exactly 4,962 miles away from your hometown of Monroe, Washington. You’re certainly on your own journey!
Yeah, for sure. Kind of just coming over to Europe in general, it was like, ‘Okay, this is something you’re going to do by yourself and learn from.’ So, yeah, I just had to learn to be by myself a little bit and do everything on my own. Obviously, I have a team and a I have a mechanic and I have different resources that I can use, but throughout the day, most of the time I’m by myself.

You ever feel lonely or bored?
Yeah, definitely. It gets pretty boring. Especially since I was sick for a while and had Epstein-Barr and I couldn’t really train or do anything. When I’m here at the apartment, there is nothing to do unless you’re training or riding.

You raced to 10-17 moto scores at the nearby MXGP of Belgium on Saturday afternoon. What did you make of your race day at Lommel?
Going into that race everybody knows that it’s going to be rough. With my fitness and everything lately, it has been a super struggle coming back from Epstein-Barr. We weren’t too sure of what was going to be expected this last weekend and even my mechanic and I were joking around that I’d get in the points on Saturday. However, I actually went out on Saturday and thought that the track didn’t seem too heavy or too deep. For the most part, I had a good time and I kind of went in with the mindset of, “Yeah, I’m not really focused on getting any results or anything. Let’s just see what we can do.”

How much has the Epstein-Barr taken out of you?
It’s been tough. I think it’s just kind of the compound of coming back from a five-month injury with the knee and then directly into the Epstein-Barr… That whole thing was kind of an unknown. I mean a lot of people have had it, but nobody really knows what to do when you have it and how you get rid of it. Those two things definitely set me back quite a bit, for sure.

Countryman Thomas Covington has also been dealing with the quirkiness of Epstein-Barr virus. It all really sabotaged his ’19 season as well.
Yeah, it definitely did. I saw all that. He told me he got it too. That’s crazy. Ben Watson has had it. Ben Paturel, he just came out saying he had it and is done for the rest of the year.

All things considered, I can totally sense that you’re keeping your spirits up. Thoughts?
Yeah, I’m trying to. I mean I’ve just kind of looked at it in the bigger picture. Obviously, every time you’re racing you’re like, ‘You know, this is the year that I’ve got to make it happen; this is the year to set the career and everything else up.’ I mean I definitely wanted this year to be my year to break through, but the cards just haven’t fallen that way. I just have to take a little bit of a step back and think that I’ve just got to be positive about it and look at the bigger picture. I’m looking at this as a whole career, not just a year-type of thing.

Are you looking forward to this last leg of the season? Can you get a moto win or even GP win up on the scoreboard?
Yeah, I sure hope so. This last weekend went better than expected with how good I was feeling with how demanding that track was. In that first moto I pretty much pushed the whole time and was able to get 10th, which isn’t a great result, but at Lommel, it wasn’t too bad. I think that now I’ve just turned over that stone. Hopefully I can build a little bit from here. I’m going to do a little bit of testing with suspension. These last four GPs, I’m not aiming for the world. I’m hoping to make some progress and hopefully do well before the end of the season.

How has the team been with you and the overall situation?
It’s tough for everybody. For me, for my mechanic, for the whole team, we all want to get results and we came into the year thinking that’s what we were going to get all year. It’s definitely been a struggle for everybody, but we just can’t give up. That’s basically how we’re looking at it. We just want to make the best of the situation and to try and do what we can get back on form.

While the results have not been coming, you’ve been out there on the circuits and amongst the front runners when you had a bit of strength. What do you think about the class leaders such as Prado, Olsen, Vialle and Geerts? Could you be right there with them?
I mean I definitely think that I could run up at the front. I know I can be a podium guy when I’m feeling good. Just at the moment, I’m not. You just have to go with where you are at right now and build and just get better from that point.

Any idea yet as to what you will be doing in 2020?
No, not 100-percent sure. I have to move out of MX2 after this year, so it’s possible to be racing in MXGP next year. Maybe I’ll be in America. I don’t really have anything set in stone. Obviously, if I would have had better results this year it would have been a little easier to know what was up right now, but I’m still kind of deciding. I definitely think that I have the potential to do well and be up front and be a podium dude, it’s just telling somebody that or showing somebody that is different, you know? Right now I’m kind of telling everyone, “Hey, I can do this and I can do that when I’m healthy!” I’m not doing that at the moment, so a lot of people want to take what they see at the moment with me.

In a perfect storm, what would you like to see happen with your racing exploits come your next career decision?
A perfect storm would be to stay with Monster Energy and Kawasaki and everything. If I were to go to America and run on Mitch Payton’s team, I think that would be good. I just want to go somewhere that has a good setup and I could show my potential and race at my best. And as far as supercross goes, I like it. I mean I grew up racing arenacross when I was really little. I also trained doing supercross a few years in-a-row in getting ready for Monster Cup. I was going to do West Region Supercross in America with Bud Racing this year, but I got injured right before. I like it. I like supercross. I haven’t been doing it for a couple years, but I think with a few good and solid months of training, I should be able to do it and do pretty well at it.