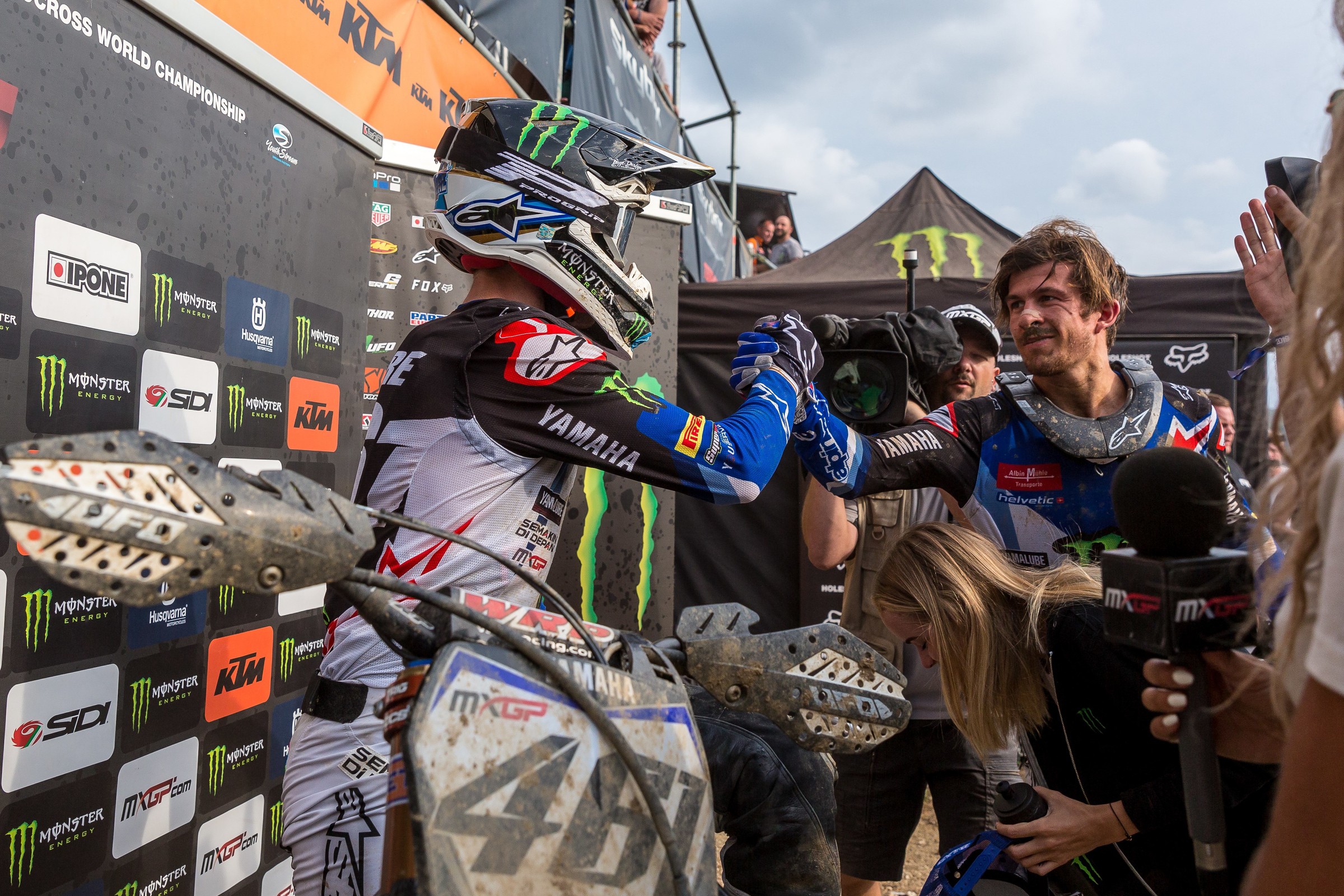 Following that lengthy trip to Indonesia, the Grand Prix contingent returned to normality for round 13 (of 18) of the 2019 FIM Motocross World Championship. The hard-pack surface of Loket in the Czech Republic played host to the event and prompted some intriguing storylines. A lot of talking points emerged across the weekend.

Romain Febvre is one of the greatest riders in the world and already has a world title to his name at 27 years old, hence it is utterly baffling that he went without a Grand Prix win for more than three years (1,149 days, to be exact—since his overall win in the 2016 MXGP of France). It was certainly the right time for Febvre to get the rather large monkey off his back, as everything has been lined up perfectly for some time. The potential has really been clear for all to see, as he has recorded the fastest times in a lot of practice sessions and also claimed four pole positions thus far (one less than Tim Gajser).

Although that may not seem like too big a deal for a former world champion, Febvre has experienced a lot of lows since his previous triumph at the Grand Prix of France in June 2016. There were concussions and setup issues, and then he simply was not good enough last year. It is understandable that some started to question whether he would ever add to his list of triumphs, but no more. The way he won at the Grand Prix of Czechia was quite the statement as well, as he took a commanding clean sweep and was clearly the fastest rider.

“I was just focused on my lines, trying to find better lines and everything,” Febvre said in an MX Vice interview. “Even after 20 minutes I stalled my bike two times in one lap, that is where they came back. They closed the gap. I was even not worried about this, because I saw I had the gap. They closed from five to three seconds, then I said I just need to make a few fast laps again and then I will open the gap. It is what I did. I was a little bit confident, not too much but confident about my riding and what I can do. I showed it.”

“Like you said, we had the gap,” Febvre continued. “We were not all close, so I knew I was faster by a minimum of one second a lap if I did not make any mistakes. For sure it is easier when it is like this. You do not need to think about your speed or anything like this to find some solutions or something like this. It goes right from the beginning.”

2. FACTORY BIKES ARE STILL SO DIFFERENT

Technology is moving at such a rate inside the Grand Prix paddock that one could be tricked into thinking that those piloting factory machinery do not have as much of an advantage. Tommy Searle, who was pulled into the Monster Energy KRT tent as a replacement for Julien Lieber and Clement Desalle, was going to act as a guinea pig for those harboring that theory. There were plenty of theories floating around in the hours prior to the race, but the underlying tone was that the pundits wanted to see if jumping onto a factory bike really is a game changer.

There were a few factors to consider in this case study, one being that Searle has been fighting broken ribs since his switch to KRT and lacked core strength at the Grand Prix of Czech Republic. Despite that ever-present issue, he excelled on the surprisingly rough layout and bagged a sixth in qualifying on Saturday. A poor start hindered him in the first points-paying moto, but he still charged to 12th and set the fastest time of the moto in sector one. Those facts alone offer a glimpse at the immediate gains that can be made with factory machinery.

The second race was much more eventful, as an untimely altercation with a trackside fence left him with a sore hand and no points. Still, despite the issues, he was beaming about the factory feel.

“I was surprised in the race how much easier it does come on that bike,” Searle told MX Vice. “You can go fast on a normal bike in timed qualifying, that sort of thing, but over the duration of a race it does make your life a lot easier on a better bike. That is the main thing I found, particularly yesterday. I think it is a lot of little things that make your life a little bit easier.”

Jeremy Seewer, who has stood on the box at every July event, later echoed those thoughts. Seewer has been a full factory rider with Monster Energy Yamaha Factory Racing for the entire term after moving over from Wilvo Yamaha MXGP at the end of last year. The two teams work closely and are considered the elite Yamaha efforts within the paddock, yet Seewer stated that none of the knowledge he gained last year really applies to his new steed. The conversation was sparked as he looks ahead to the grueling sand of Lommel next weekend.

“Actually, not at all for some reason, because my bike is completely different to last year,” Seewer said when asked about lessons learned in his rookie season applying now in an MX Vice interview. “We have factory parts. My whole set-up starting from the handlebars, footpegs and those kinds of things… It is so different that I cannot compare to last year. I could not say last year at Lommel I went to a 48 and let’s try it this year. It does not work, because it is a whole different system.”

3. JORGE PRADO IS READY FOR MXGP

If Jorge Prado takes the MX2 title this season, which is almost a given at this point, then there is a rule that will force him to enter the premier division. Although some tend to believe that rule will be changed so he can contend for another title on the smaller bike, that could not be further from the truth. Prado has really outgrown the MX2 class at this point and is looking forward to a fresh challenge. When first questioned on his future plans two rounds ago, he made that quite clear.

“It is 450 time,” Prado said abruptly after signing his four-year deal to stay in the MXGP with Red Bull KTM. “It is a tough one. If I do not win the title because I get injured, it is a different situation than if I don't win the title because the other guys are going faster than me. It depends on the situation. If the other guys start improving and they start beating me, that could maybe be a reason to stay another year on a 250. That would mean that I am not ready to pass but, at the moment, I am showing that I am pretty strong. I keep working hard too. Let’s hope I can pass for 450.”

The Grand Prix of Czech Republic was another reminder of just how superior he is compared to his competitors in MX2. Prado claimed both holeshots, which was not surprising at all, and decimated his closest rivals. There was no doubt he was going to win, which reinforces the fact that there is nothing to gain from spinning laps alone at the head of the field. Prado wants a fresh challenge and is focused on the future. Speaking of which, it is worth noting that the USA never really came up during contract negotiations—although it was rumored he might come to the USA to race.

“Probably for the sport, for my career as a racer, and to improve, it would be good to move up to the 450,” he told MX Vice. “On a 250 the riders are very good, but in 450s we have so many world champions at the moment. The level is super high, so they are riding fast. Hopefully I can get well with the 450 and we will see where I am next year.”