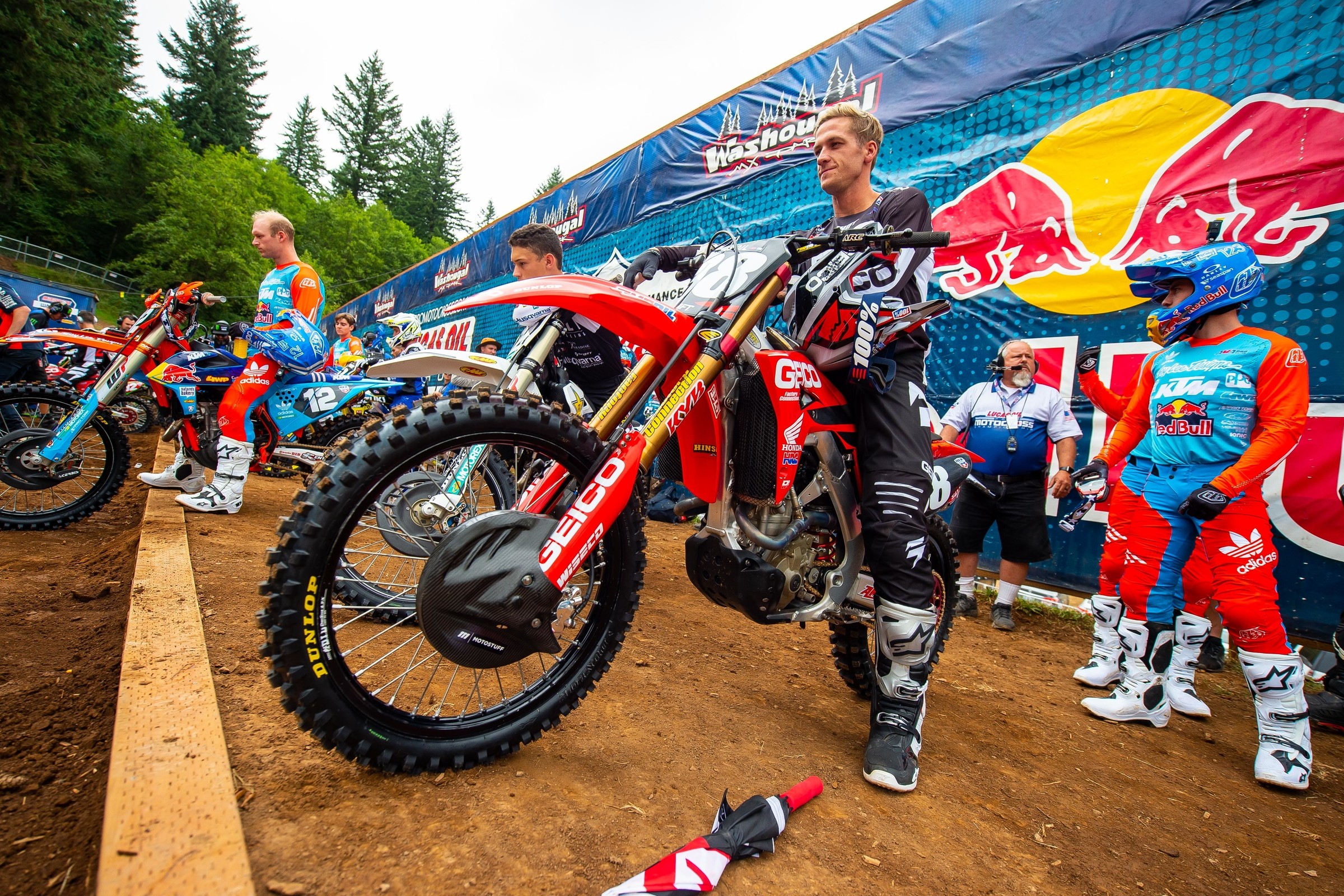 We’re once again firing off questions at long-time pro Jason Thomas for some opinions on the ninth round of the Lucas Oil AMA Pro Motocross Championship.

Did Eli Tomac make a statement with his 1-1 weekend?

I think he had a great day, but I don’t know if I would say it was anything out of the ordinary for Eli. He came in with a 30 plus points lead and had been the class of the field this season. He didn’t dominate every weekend, but I think everyone knows when he’s on, he is the best guy and has been for a few seasons. He put a pretty hefty points stamp on the field, though, and might find a way to clinch this before we even arrive for Ironman.

How is he able to go so much faster out of turns than everyone else? We saw him light up the tire and get crooked a few times but managed to make it work just about every time. And when he passed Ken Roczen, he carried so much more speed through the scrub jump heading into the woods. When he passed Marvin Musquin in the chicane, he exploded out of the turn! How does he do this!?

When he is comfortable and, in his zone, he is much more aggressive than everyone else. He is hard on the clutch, demanding power out of his KX450. He doesn’t always ride that way, though, which might be the most interesting part. His average day is usually good enough to be in the hunt for a win but on days like Saturday, there aren’t many, if any, that can go his pace. He is able to find traction where others can’t, and carry momentum where others feel the need to brake. To answer how he does this is difficult to answer because I don’t think he would be able to pinpoint it, either. It’s just the combination of elite talent, elite equipment, and supreme confidence. We don’t always get to see it, but we certainly know when it’s present.

What were your thoughts on the Tomac/Roczen get-together at the end of the first moto?

It was just racing. Eli got to the inside and they were both fighting for the line. Their bars touched and Kenny had to accelerate hard to jump a few ruts. Had the ruts not been there, he would have just let off and turned after the contact. The ruts forced him to accelerate to the outside in order to hop them (and avoid high-siding over them) and made it look much more dramatic. The big key here is that no one is ever going to purposely initiate contact with their handlebars, so it was just a result of tight quarters and neither side wanting to budge.

First, have we ever seen this many people go off the track? Ever? I think JA21 was frustrated with being behind Savatgy. He was going to make the move eventually (my opinion) and every second he was behind him was a second wasted. When Savatgy ran him wide, I think that was the last bit of patience that Anderson could muster. He had to know that making a pass while off the track wouldn’t be smiled upon, but I just don’t think he was in any mood to care at that point.

Speaking of Savatgy, he earned his season-best overall finish. Although he faded after getting good starts, he looked way better than in previous races. What did you see different in his riding this week compared to before?

Savatgy has been good at Washougal in the past so I wasn’t surprised to see him flash speed. He was third in timed qualifying and then holeshot both motos, setting himself up for success. I think he emptied the reserves with the early lap intensity and that cost him later in the motos but the best thing he can do for his 2020 value is to run up front. Yes, he faded a bit, but factory teams want guys who have the speed to run up front. He is showing he has just that.

How good were the battles between Tomac/Roczen, Tomac/Musquin, and Ferrandis/Cianciarulo/Cooper? What stood out to you?

They were great but I think the track was a big contributing factor. Washougal is very difficult to pass on. Many of the lines funnel back to one ideal line in the corner, making it hard to close a pass. Cianciarulo seemed to be the biggest victim of this, following both Cooper and Ferrandis for the majority of the day. He was arguably the fastest guy in the 250 Class but lost eight points when all was said and done.

Were you worried about AC sending it too hard on the wall jump/roller?

Nah, we have seen riders launch that jump for years without much of a problem. With the sand making a softer landing, it wasn’t that brutal on the equipment and that would be my only concern. Breaking a wheel would be catastrophic for the championship but otherwise, bombs away!

We've seen Washougal MX Park have different types of whoops heading into the finish line. Although they were mostly jumped in similar fashion, we did see passing in them. What were your thoughts on this year's whoops?

These whoops have been built many different ways, but this year’s variation looked fairly easy. They were bigger which means many riders chose to jump and those that blitzed weren’t having much trouble. If a rider got a great run through them, he could make a move, but most laps were follow the leader. I don’t know if they were ideal for spectating, but as a rider I am sure many were absolutely okay with the 2019 version.

How was the live show? What were some highlights of the night?

It was great! The Pacific Northwest loves moto and turned out in droves to join the Racer X and PulpMX family for a good time. Having Zach Osborne and Justin Bogle on stage was a hit and both were very personable. We are hoping to do several of these for 2020. If you missed it, you can listen to it here.

Fantasy studs vs. killers? If we even want to go there this week.

Well, most of the guys who pooped the bed at Spring Creek killed it at Washougal. That was bad news for me because I had all of the heartbreakers a week ago. There were huge points to be had from Savatgy, Christian Craig, Chase Sexton, Derek Kelley, Noah McConahy, and many more. This was easily the highest points scoring weekend of the year. The only real killer was an off day for Zane Merrett and a DNF with two laps to go for Taiki Koga.