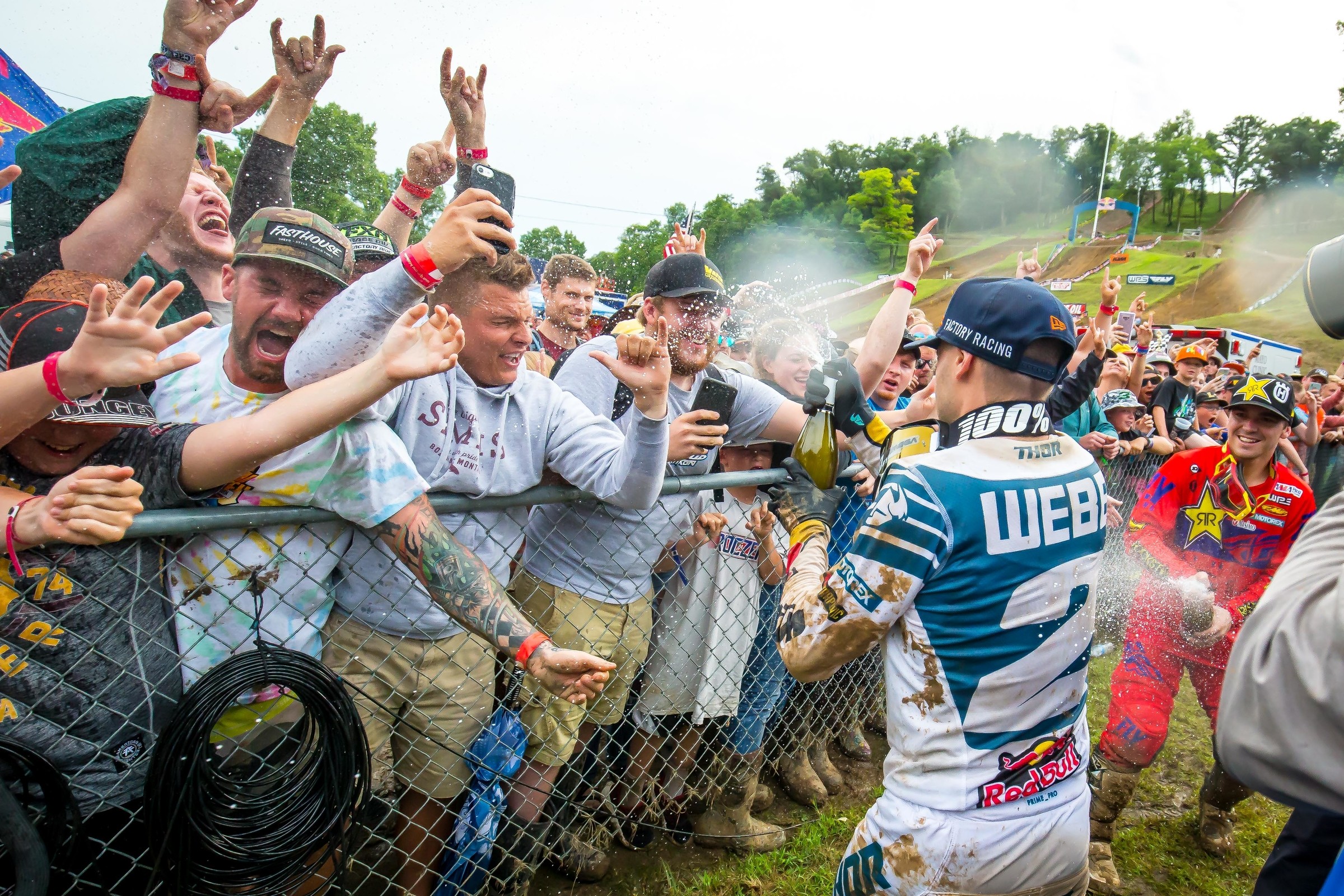 Zach Osborne was in too much pain to feel good. In his return to racing from an SC joint injury (that’s the connection between the collarbone and sternum), the Rockstar Energy Racing Husqvarna rider had somehow picked up right where he left off, taking second overall at Millville just like he did at his last race at Southwick. They key to such a fast recovery? Really, Zach’s just a tough SOB.

By the end of the second moto, the shoulder was hurting so badly that Zach was on the verge of tears. On the podium, he couldn’t even lift his left arm over his head. Note in the photo below, Cooper Webb and Eli Tomac lifting trophies and sponsor drinks high into the air, while Zach, unable to lift his left arm any higher, keeps his drink much lower. So he, held the trophy lower with his other arm. He’s also not smiling. It hurts.

"I haven’t actually done two motos since Southwick, I crashed the week after,” said Osborne. "The second moto there was a point there where I thought I could go for the win, I put in two or three hard laps behind Cooper and that was it. That was all I had. The last five laps, I was holding on for dear life, basically. It’s good to get on the podium and get some reward, for the pain."

“The first moto was okay, I was able to work in a gap there at the end and cruise a little bit," he continued. "The second moto, I was in position to maybe make a charge to the front, Cooper was right there, but after that little spurt I had nothing left. The problem is that the joint is stretched and it needs to scar in, and that doesn’t happen in two weeks. It gets a little loose and tired, so I’m having to compensate with my neck and my arm, and those muscles get tired more quickly because they’re not as used to the workload. It’s just a matter of managing it and I let it get a little ahead of me. But, considering where I was ten days ago, I’m happy and grateful to be back on the podium. Really, there was a time when I thought it was over. They thought they saw a fracture under the plate [in my collarbone] again. That came to be false. I thought my season was over, so then to come from that to getting on the podium, it’s a great feeling.”

While Zach’s performance at Millville was powered by grit, Cooper Webb’s sudden improvement from top-five runner to 1-1 race winner was in some ways the opposite. Webb credits a weekend off and some rest and relaxation for coming in fresh. Saying he spent some time at the beach and on the golf course, Webb was ready immediately at Spring Creek, clocking the fastest qualifying time. Things got more serious later in the day, when he choose to battle Ken Roczen for the moto win even though a 1-2 score would have won the day’s overall anyway. For that, Cooper hinted that he knew Roczen has been struggling physically late in the motos lately.

“I knew that if I dug deep that…" Webb said, pausing to try to figure out the right way to say this, "he wouldn’t maybe go the whole distance. I was able to get a good flow and was catching him bit by bit. I was just focused on catching him and I really wanted the moto win.”

If we're going to talk about digging deep, then we should tip the visor to Roczen here as well, because over the last month he's shown us something is really, really wrong, physically, and he's dropped way off the pace during some of the motos (including a pause mid-moto to throw up with only a few laps to go at RedBud). This time Kenny was stronger, maybe due to the cooler weather, maybe because he's figuring out a solution, or maybe some motos are just better than others for no real reason. Even when Webb passed him back with two to go, Kenny reared back for one more push and almost stole the lead in the last turn. That would have felt good after Webb stole wins from him in the last turn in supercross several times.

Cooper didn’t need to win the moto, and really, he didn’t need to even win a race at all this summer. His Monster Energy AMA Supercross Championship has already revitalized his career, validated his move to Red Bull KTM, and given him plenty of laurels to rest on. I saw Webb and Osborne’s trainer Aldon Baker after the race and Aldon explained that it was key for Cooper to hang in there during a part of the season where he could have mailed it in.

“I told him he really needed to go and try to at least get one win in these last few races,” Baker said. “He’s been close, he’s been getting better, so it would really help him to go get it now. It’s easy at this point of the season to start thinking the other way.”

Baker pointed out something often taken for granted: This is actually Webb’s first real full season racing all 17 supercross rounds and each race in pro motocross, as injuries held him from events in both 2017 and 2018. It’s also the first year handling the load of Baker’s training program. Baker says recently it looked like the long season was finally catching up to Webb, but mentally, Cooper was able to push that aside, fight through it and get that win.

We all know what a single win can do for Webb’s confidence. That’s why it was so critical to try to get one of these, even if it probably won’t impact a championship run. Somewhere down the road, it just might.