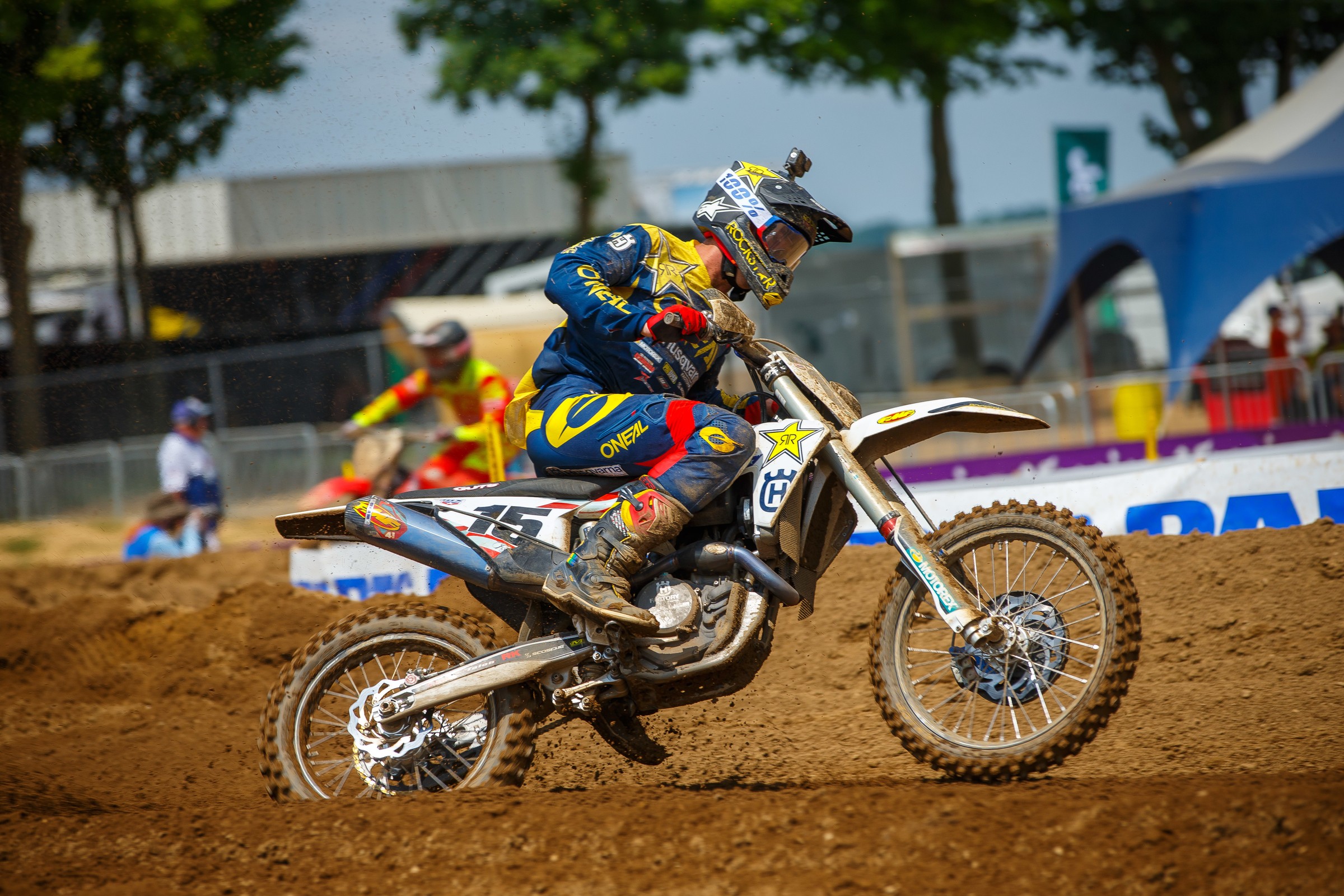 After a brutal stretch of racing, the Lucas Oil AMA Pro Motocross Championship finally had its weekend off last week. For many of the riders it was much needed, both mentally and physically, as a large number of them were starting to feel the depleting effects of the absolute grind that is the nationals. Now that they’ve had some time off to recharge, we’ll see there are any new faces up front when everyone goes back to work at Spring Creek MX Park.

So far Zach Osborne’s rookie season in the 450 ranks has gone very well. The Rockstar Energy Husqvarna Factory Racing rider has been on the podium multiple times, and even won the second moto at Southwick. His season hit a speed bump though when he crashed while practicing for RedBud and hurt his shoulder. Osborne was forced to miss RedBud but will be back this weekend at Spring Creek. Will he pick up where he left off or will he still be feeling the effects of his shoulder injury?

It cannot be overstated how popular Alex Martin is in Minnesota. He even gets cheers during track walk at the Minneapolis Supercross! The seal of approval is even bigger at Spring Creek—Martin’s parents own the track and he literally grew up there. His hometown race is coming at a good time too. Martin rode great at RedBud and if not for his bike blowing up on the last lap of the first moto, he would have landed his first overall podium of the season. The team has also made some changes to the bike, including more power, which showed when Martin ripped both holeshots at RedBud. Add it all up and the timing is perfect for Martin to put in his best ride of 2019.

It’s that time of the year again with the hometown race @scmxpark coming up this weekend!! Don’t forget to grab yourself a #trolltrain tee! Click on the link in my bio or visit: https://180decals.com/martinbros/troll-train-tees

Round Two at Round Eight

For Dean Wilson anyway, who missed the first six rounds of the season due to a shoulder injury sustained during Monster Energy AMA Supercross. His first race back went pretty well too—the Rockstar Energy Husqvarna Factory Racing rider went 12-7 for ninth overall at RedBud—even with a crash early on. With the first race of the championship out of the way, and plenty of time to dial in the bike, and himself, Wilson should be ready to make a charge at Spring Creek.

Spring Creek won’t be the second race of the season for just Wilson. Kyle Cunningham will also be making his second go at the nationals this weekend after going 13-39 for 16th overall at RedBud. Don’t let those results fool you—Cunningham was dealing with a bike problem all day that finally resulted in a DNF in the second moto. Cunningham was the top 450 Class privateer last year so you know he’s capable of running a blistering pace. If he avoids bike problems this time around expect that speed to be on display at Spring Creek.

Despite taking second overall, Adam Cianciarulo’s day at RedBud is likely one he’d rather forget. The Monster Energy/Pro Circuit Kawasaki rider was penalized two spots in the first moto, which moved him from third to fifth, due to not slowing down after going off the track twice. Although Cianciarulo didn’t agree with the call, he was able to put his frustration aside for the second moto and finish second. He now has a 25-point lead over Dylan Ferrandis with five rounds remaining. We’ll see if Cianciarulo can keep his championship hopes healthy by riding well and avoiding any controversy at Spring Creek.

Early in the season Dylan Ferrandis couldn’t seem to buy a start, which was having a huge impact on his results. That’s changed in the last few races, and not surprisingly, has helped him earn four wins in the last five motos. Obviously, the French rider is riding some serious momentum coming into Spring Creek, which is good for his title picture because he’s trailing Cianciarulo by a moto-worth of points. His recent wins have gotten his front wheel in the door. If he wants to keep wedging it open, he’ll need to keep things rolling with more wins this weekend.

Justin Cooper’s been great so far, and as a result held second in the points for the first six rounds of the season. That changed at RedBud, where a surging Ferrandis took over the runner-up spot by logging a perfect 1-1 day and passing his teammate in the standings. Cooper now trails Ferrandis by a single point. Cooper certainly has the speed to take the position back, but it won’t be easy—Ferrandis has been on a rampage lately. Which Monster Energy/Yamalube/Star Racing Yamaha rider will hold second when the checkers fly at Spring Creek?

If we had to guess one thing Jason Anderson is sick of hearing, it’d probably be that he’s never won a Pro Motocross overall. Fortunately for Anderson, he knows exactly what he has to do to silence that talk, and he can do it as early as this weekend. It wouldn’t be a surprise either—Anderson has been close plenty of times, and was even second overall at RedBud, or FriedBud, as Anderson might call it. We’ll see if he finally takes the next step and checks the win box at Spring Creek.

Cooper Webb wasn’t exactly lighting the world on fire during the first part of the 2019 Lucas Oil AMA Pro Motocross Championship, but that’s not really a huge surprise. After all, his focus was on successfully bringing home the Monster Energy AMA Supercross Championship, one of the most prestigious titles in all of two-wheeled motorsports. That said, you knew it was only a matter of time before the former Lucas Oil 250 Class Pro Motocross Champion’s results started improving. In the first eight motos Webb’s average finishing position was 5.25, but in the last six he’s averaged 4.17. We’ll see if that average improves even more on Saturday.