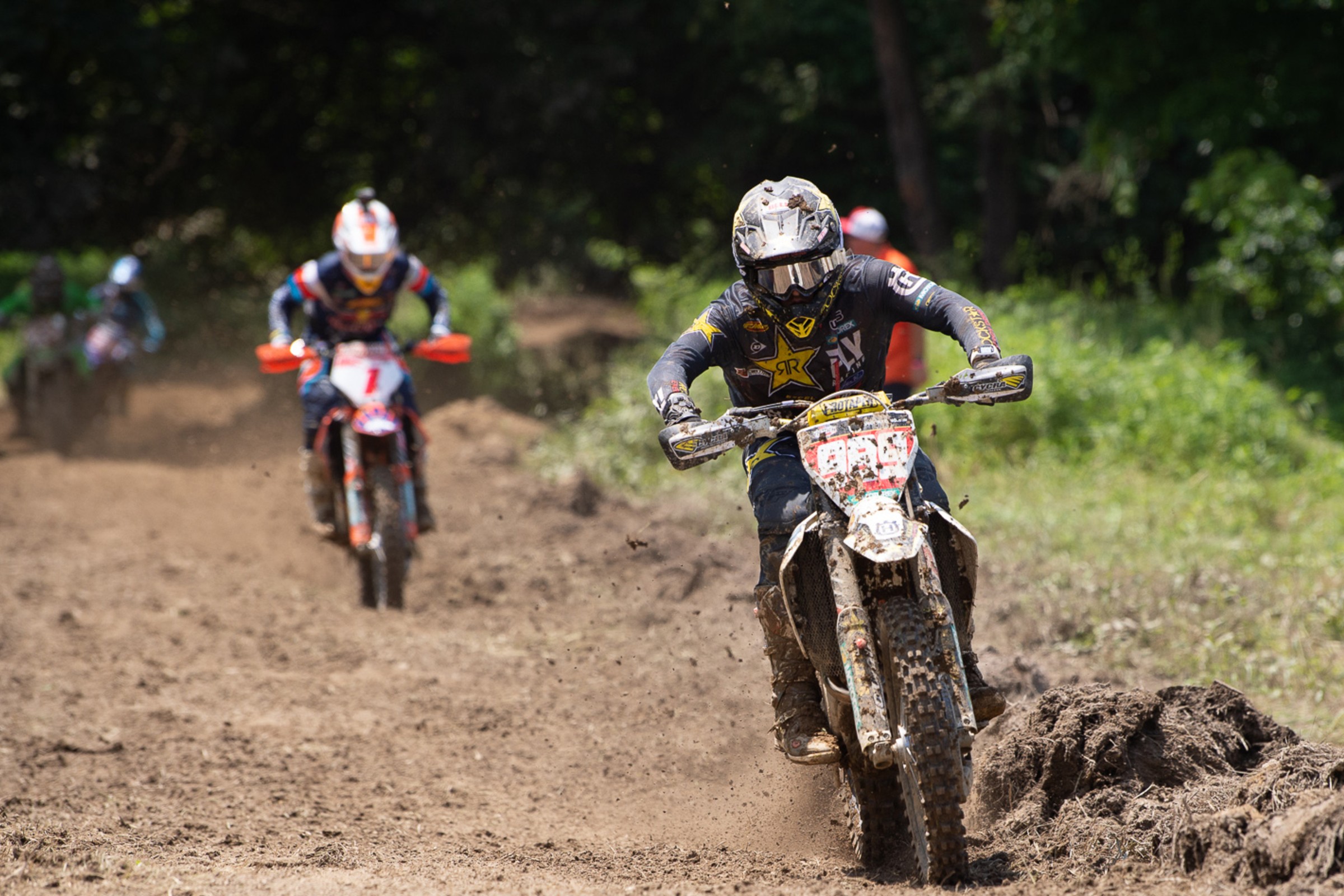 GNCC Report 5 Things We Learned at the High Voltage GNCC

Round nine of the 2019 Amsoil Grand National Cross Country (GNCC) Racing season would see the series head to an all-new venue for the High Voltage GNCC. Torrential rains forced the cancellation of the opening round of the season at Big Buck, and due to scheduling conflicts the series would unfortunately have to sit out the Big Buck venue for the 2019 season with plans to return in 2020.

The replacement would be the Lilly Family Farm in Dunkard, Pennsylvania, just a couple of hills over from High Point Raceway. This replacement track would end up being one of the most popular courses this season among GNCC regulars, and it produced some tight racing as well. Here’s what we learned.

That title is the exact words Steward Baylor spoke while mountain biking the track on Sunday morning. The weekend started off with great conditions before a small shower saturated about three miles of the course at the end of the amateur ATV race on Saturday. It began to dry out, and the opening lap of the pro ATV race would see pretty good conditions until heavy rains soaked the entire facility on the second lap. The clay that had became hard packed and blue grooved would seemingly become the slickest substance known to man in the matter of minutes.

Another rain shower on Saturday night had some racers dreading the potential conditions on Sunday but the GNCC track crew had other plans. The good thing about the course becoming hard packed on Saturday is the fact that those heavy rains never had the chance to soak into the dirt, so the crew took to the trails early Sunday morning on the Sutter Trail Dozers and began cutting through that hard packed clay. What did they find underneath? Tacky and much better dirt that would just get better as the day wore on.

Additionally, the sun stayed out throughout the day on Sunday and the field sections that started out slick just continued to dry out. The combination of these dozed trails with the sun-dried field sections made for one of the driest and best racecourses the series has seen in several seasons. When the track is good, it usually means the racing is good as well and this would definitely be one of those cases.

Those who follow GNCC Racing know that Kailub Russell is a tough competitor and seemingly always manages to find his way to the front of the pack no matter the conditions or type of racecourse. The same can be said for Thad Duvall, but for the past several seasons Russell has always seemed to find that little extra edge over Duvall. Thad has managed to best Russell on several occasions, but it seems like Russell is always right there. Well, this race would be a little different.

The previous round at Snowshoe was disastrous for Duvall’s championship hopes. A freak mechanical issue left Duvall finishing outside of the top 20 overall and scoring no points towards the GNCC National Championship. Coming into round nine, Russell had opened up a 48-point lead over Duvall. Russell would lead the opening lap, but on lap two Duvall would find his way around Russell and hold that lead. Meanwhile, Russell would be left fending off the efforts of Kawasaki teammates Josh Strang and Jordan Ashburn, who rode hot on Russell’s heels for the majority of the race.

Duvall put his head down and begin to charge away from the rest of the pack. His lead over Russell would begin at six seconds, then increase to 17 seconds, then to over 40 seconds, then eventually he would be over two minutes ahead by the end of the race! The only downside for Thad is even with the win, Russell’s second place finish keeps him 43 points ahead in the hunt for the GNCC National Championship.

Of course, just as a freak issue took Duvall out at Snowshoe, anything could happen to Russell when the series returns from summer break in September!

In the film Ferris Bueller’s Day Off, it would be principal Rooney explaining to Ferris’ mother that he has amassed a total of nine unexcused absences through the school year. This came as a shock to Bueller’s mother, and in a similar fashion Ben Kelley’s performance in the 2019 season has come as a shock in some ways. With nine rounds complete, Kelley has claimed nine wins in the XC2 250 Pro class. This further pushes him ahead in the record books with the most consecutive XC2 class wins and most XC2 class wins in a single season.

There are four rounds remaining in the 2019 season, which gives Kelley the chance to sweep the season and in doing so he would achieve something that has never been done before in one of the pro classes in GNCC Racing. Additionally, with four more wins Kelley would hold the most XC2 class wins in history. Currently, Kailub Russell still holds the record with 18 wins in the XC2 class with Jason Thomas second with 17. Kelley is currently tied for third-most wins with Josh Toth at 15.

Additionally, Kelley currently sits fourth place in the overall GNCC standings. No XC2 rider has ever finished the season higher than fifth place overall, which has actually been done a total of six times. While there’s still four rounds remaining and a number of XC1 racers who would like to improve their overall finish for the season, Kelley still stands a chance to break yet another record in what has been one of the most impressive seasons an XC2 racer has ever seen.

However, if Kelley wants to break these records, it has to be done this season. GNCC rules state that once a rider claims an XC2 championship they are allowed to defend their title the following season, but regardless of their finish the next season they must move to the XC1 class. Since Kelley is the defending class champion and is well on track to back that up with a second title, he will ultimately be contesting the XC1 class in 2020.

As mentioned earlier, Babbitt’s Monster Energy Kawasaki teammates Josh Strang and Jordan Ashburn rode the majority of the race on pace with the lead duo of Duvall and Russell. Once Duvall broke away from the pack, the Kawasaki boys did a great job of keeping Russell in their sights all the way down to the wire. When the checkered flag flew, Strang would end the day third place overall just four seconds behind Russell with Ashburn finishing fourth, another two seconds back.

This performance is exactly what the Kawasaki guys needed as they’ve ran with the front runners all season long but have yet to find their way onto the podium. In fact, this actually marks Kawasaki’s first XC1 podium since the 2013 Unadilla GNCC where Strang ended the day third overall in his first U.S. effort aboard a Kawasaki. After the elimination of the AMA Arenacross program, Babbitt’s would shift their efforts to GNCC Racing, and put together the first factory-supported Kawasaki effort GNCC has seen since 2010.

The team is still headed up by Denny Bartz, who ran the arenacross program, but it’s also 1993 GNCC National Champion Fred Andrews helping run the show. Freddy was a long-time Kawasaki rider through the late '90s and early 2000s, so he’s been a perfect fit. While the early season results may not be what a racer strives for, both Strang and Ashburn have been putting together rides that are nothing to scoff at with both riders landing inside the top five several times this season. With this kind of momentum rolling into summer break, we very well could see these guys excel even further when the series returns.

As is tradition with GNCC Racing, the series now rolls into a summer break, albeit a bit later than usual. The series takes a break during the summer months, as it’s just too darn hot to expect racers to compete at such a high level for three hours. Additionally, the same staff who run the GNCC events are the ones who run the Rocky Mountain ATV/MC AMA Amateur National Motocross Championship at Loretta Lynn Ranch each summer, and a number of them are also involved with the Budds Creek and Ironman rounds of the Lucas Oil AMA Pro Motocross Championship.

For the racers, this is a chance to regroup, train and get ready for the final four rounds. The summer break is a double-edged sword. For some racers, it’s a much-needed break as they can get back to the basics or heal up for the end of the season. For others, it can hinder their results as they may spend more time relaxing and trying to take time off than getting their head back into the game. This can make the final rounds some of the most exciting of the season, as it can be hard to predict exactly what is going to happen.