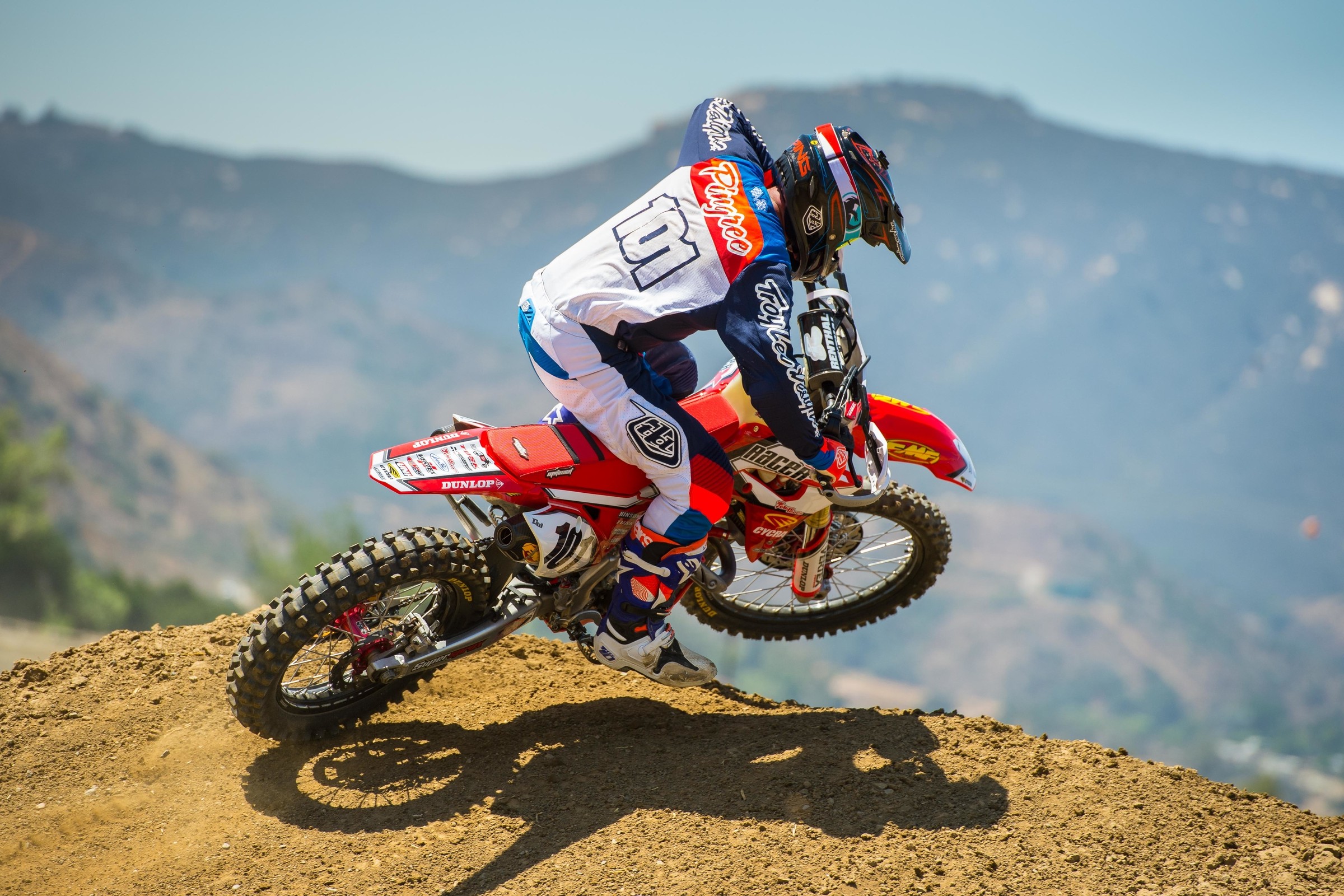 Do you think that Alta Motors could have been saved if there were a class (or two) for the electric powered motorcycle? The AMA is nervous about making rules for the bike because of the four-stroke rules mistakes, I understand. But they should do something now to help the companies developing these bikes so they have a goal, or classes to shoot for. Why is it so hard to change rules that have been in place for decades? An example would be to change the 450 class to a 400 class starting three years away and give them all a deadline and time to comply. I know Davey reads this and is on the board and maybe has some inside info on this, but it seems from here that it is being ignored because it is "complicated." Thanks to all of the Racer X staff for what y’all do for the sport!

While I admire Alta’s gusto and drive to change the complexion of motorcycling, I think they were simply a little too ambitious. Rather than start with mini bikes, commuter bikes, trail bikes, etc., to get people comfortable with the idea of electric, they jumped right into motocross racing models. We often joke in the fire service that certain departments live up to the tongue-in-cheek motto: “100 years of tradition unimpeded by progress.” We are slow to adapt to changes that big in our sport as well. Don’t believe me? Start a chat room thread about electric bikes and watch the feces get flung around like a riot in a chimpanzee sanctuary. The lack of civility and empathy in the discussion is disturbing.

The issue in electric racing is classification. With internal combustion engines we have a very simple way to create classes: Cubic centimeters. As the saying goes, there is no replacement for displacement. But how do you fit electric bikes in that equation? The torque numbers on electric motors is shocking, no pun intended. Do you regulate horsepower? That doesn’t seem fair. Wattage? Nah, that’s not right. So, how do you classify them so that the playing field is level with ICE, or other electric bikes, for that matter. Those are the issues that all of the organizational bodies are wrestling with, so don’t think they are just ignoring it because it’s too difficult. Another part of that issue is that you have to get all the manufacturers to agree on the regulations. That’s no easy task, in and of itself. While I don’t have any confirmation of this, I think the reason there isn’t a big push to drop the CC’s in the current bikes is that all the manufacturers are already looking at electric as the future and they don’t want to spend money re-tooling for old technology. Regardless, electric will get here soon enough. The battery world is on the brink of a revolution with sodium ion-based units, according to literature I’ve read, and that will usher in a quieter, “cleaner” era in motocross.

I am a long time Suzuki fan as well as Honda. Honda has Kenny... fair enough, great rider and he will win a few more championships without a doubt! Team Suzuki on the other hand? (Spewing Peick having all his problems, what a weapon) Justin Hill...The guy is garbage and that’s your marquee player. Chad Reed gets signed last minute and did more in four rounds than Hill all season. Big question here is, who does Suzuki go sign for a 450 ride in 2020? It’s embarrassing. It's obvious to keep Reed for 2020 SX; he gets people to the semi. Then go and sign a big player.  Who would you pick? Cole Seely, Justin Bogle, Dean Ferris, Martin Davalos, Dean Wilson, Shane McElrath, Josh Grant, or AC? I’d go Seely. Or put all chips in on AC? They need something big, especially going from factory to Gibbs and Gibbs saying they are doing it tough.

I agree that Suzuki needs to make a big move with their racing program, but maybe slow down the name-calling until you’re lining up for pro nationals yourself. Personally, I’d make a push for AC. I don’t think there is a better ambassador for our sport at the moment and he seems to have figured things out as of late. However, I think he’s likely to go to Kawasaki on the 450, or possibly move to Honda. I would go after Aaron Plessinger, but I think he has another year on his Yamaha deal. Dean Wilson would be another guy I’d take a chance on; his history of injuries is extensive but he’s a fighter and he has the speed to win. Past that, I don’t know. Will Seely call it for good after this shoulder injury? Can Bogle, Davalos, or Ferris win races? Sometimes you have to start looking at the next group of guys and start planning a few years out. Shane McElrath is bigger and has a very smooth, controlled riding style that fits a 450 well; I’d give him a good look. Plus, he’s from North Carolina so he’d gladly move home to be close to the team. This sport is so difficult to predict because injury can derail the next “sure thing” in the blink of an eye.

If I was Jeremy Albrecht, I’d sign Reed for SX-only, Davalos for MX-only, and hire Shane or one of the guys mentioned above to race the whole season. But what do I know?

I have two questions for you. They might get long-winded so I'm skipping out on the, "you're so cool" fluff job.  Edit as required. Here you go...

First, as an old-school rider, technique was paramount, particularly while cornering. It was always "elbows out," and "weight the outside peg." And if you couldn't keep your inside foot on the peg, get it up out of the way and forward to get more weight on the front wheel. I've been noticing a lot lately how most pros/ex-pros (including you!!!) are often riding 90 degree corners with their arms down by their sides, and more importantly, most are using there inside leg as a crutch...only to get it pulled back and dragged behind them toward the rear wheel on corner exit. Considering the frequency of knee injuries lately, are modern pros not worried about a torn ACL or meniscus?

Second, who the hell came up with the current points system for the outdoor nationals? I can't get my head wrapped around the fact that no points are awarded after 20th place. If a normally 15th-20th place finishing guy crashed and fell back to, say, 36th and knew he couldn't get back into the top 20, what's the incentive to riding as long and fast as you can? Why risk something for no payoff? I bet if the points system was restructured to where each and every position paid out its own value there would be a whole lot fewer lappers getting in the way of the leaders...and it probably wouldn't happen until the race was a whole lot closer towards the end of the moto. Something else that might help, the AMA could set a maximum allowable lap time limit. I think the tech is already in place with the timing transponders and officials could use the slowest qualified rider's times from qualifying. Two laps exceeding the time limit, with no crashes or mechanical issues, kick them off the track. Or is everybody more concerned about purse money than championship points?

Sorry for making these long. Let me know what you think. Thanks...take it easy.

1.) Technique is still paramount and something that all riders work on and continue to evolve. I’m always watching riders and trying to emulate their good traits. I will say that modern bikes have gotten so good and so fast that it has changed technique. For example, starts are totally different than they were ten years ago. Riders are starting on metal grates with holeshot devices that basically pull the forks down into the bottom part of the stroke. Because of this, and the insane horsepower and torque numbers on race bikes today, the technique to get off the line is totally different.

Front end traction has improved so much that many riders are focusing on keeping their feet on the pegs through turns as much as possible; this is something I’ve been watching Roczen do for years and have tried to duplicate. I’m not sure about the elbows down thing. Perhaps it’s a byproduct of the power the current bikes make; honestly, I find myself holding on for dear life when I twist the throttle on a 450. I’m squeezing with my knees, clamping my butt cheeks on the ribbed seat and holding on so tight I feel like I’m going to bend the bars back into my lap. Maybe that translates into dropped elbows?

2.) The current points system incentivizes riders to break into the top 20. You sound like you’ve embraced the “everybody gets a trophy” mentality and that isn’t how most motocross racers roll. You want points? Earn them. The incentive to finish as high as possible, even if you don’t break into the top 20, is gate position. There is a big difference between having 21st pick of the gate for the second moto and getting the 38th gate pick. Now, if you have a big crash or an issue in the second moto, I can see guys throwing in the towel. The problem with giving numbers to all positions, in my opinion, is that you’d have to increase the amount of points you give to the top spots so that you could graduate down to one point for 40th spot. So, for example, let’s say you gave 50 points for a moto win and worked down to one point for last place. Think about how much more significant a DNF becomes at that point. One or two bad motos and the series would be a blowout. I think that model would actually encourage less aggressive racing and would reward more steady, consistent finishes. I’d rather see these guys get after it and go for wins and points. But, hey, feel free to share your opposing thoughts below. Let’s just keep the poo flinging to a minimum.