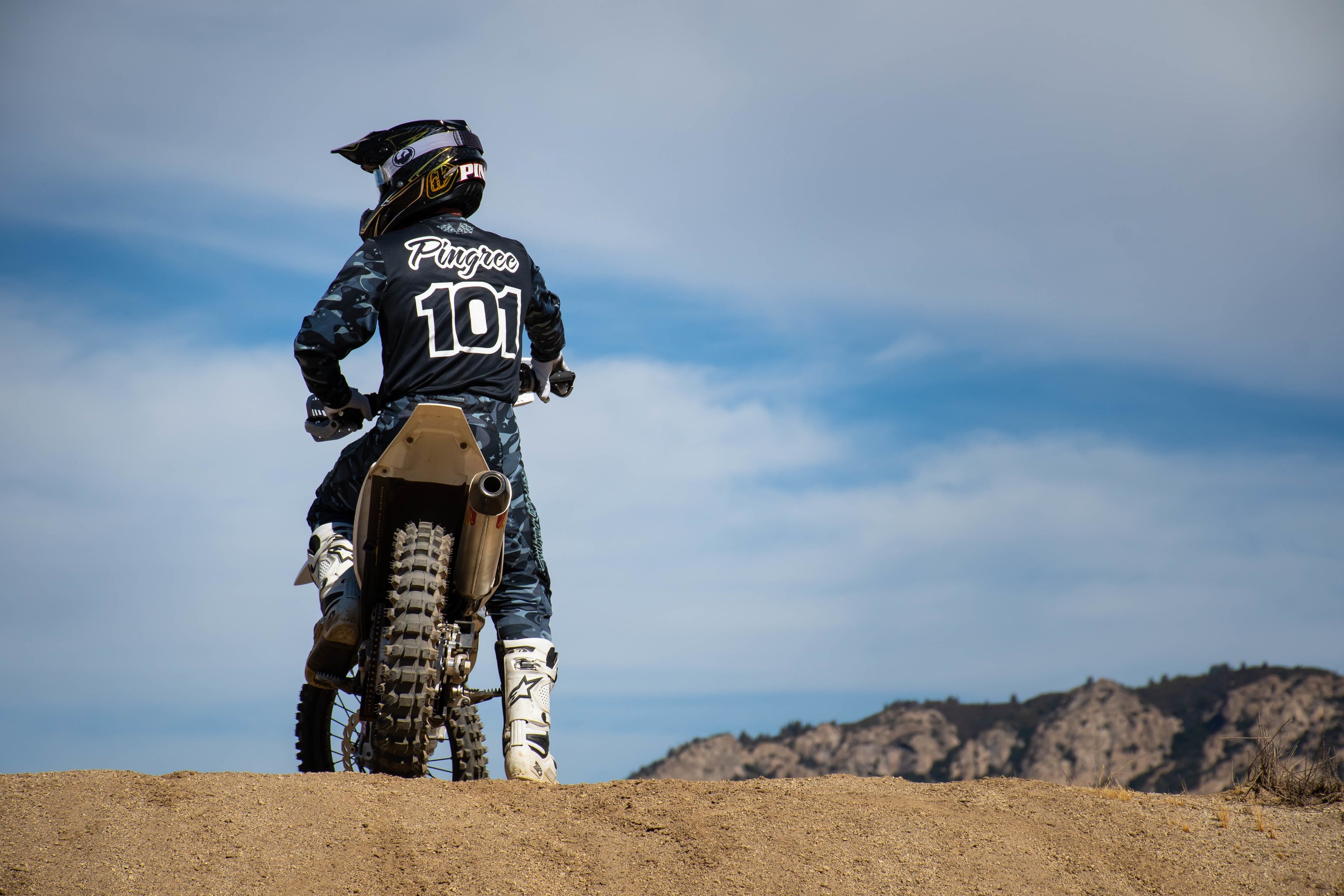 I was in awe seeing Ken Roczen and Eli Tomac in particular charging some downhill sections of the Thunder Valley track last weekend. Can you try to explain to us mortals what it actually takes to do that? To explain what I mean:

I am a versed amateur rider with 30 plus years of experience, compared to peers I do rather well in mud and deep ruts. I rode WW Ranch, GP tracks in Italy and Germany with deep ruts on several occasions. Of course, I know my place and I know I'm moving only in a fraction of their speed. In my mind I can envision how I would approach these sections. I also envision eating shit, big-time, trying it.

Can you take us on a virtual trip down one of those hills and explain what makes the actual difference? Go beyond the usual "day in and day out practicing," blah blah, you would normally respond with. Take us mortals for a spin, I mean if it was only one time, one trip down one of those hills, what do the physical forces demand and dish out? What does it feel like? How much of it is factory suspension, balls, strength, keen eyes etc.

Thanks for your insight!

You want me to take you on a virtual ride down one of those rutted hills at Eli Tomac’s pace? Holy shit, my palms just started sweating. Look, there are only a handful of people on the planet capable of those speeds in those conditions and I’m not one of them, especially at 44 years old.

I’ve been around long enough to tell you that there are many moving parts when it comes to navigating a section like that, or any section of a national track, at those speeds. It starts with bike setup, and that includes days and days of testing to find the perfect balance and feel that each rider is looking for. Depending on how far forward or back you ride on the bike, how you steer the bike, and what overall feel you want out of the suspension, this can vary wildly from rider to rider. I remember hopping on other rider’s bikes back in my day and thinking their suspension must be magical because they were killing it at the nationals. Honestly, the works stuff sucks if it isn’t set up for you; the setup is what makes it so good.

Once you have a bike that inspires confidence, you can attack the track aggressively and with much more precision. The other aspect of it is the physical, technical, and mental side. These guys are looking way down the track, not directly in front of them. The faster you go the further ahead you have to look. Body position needs to be perfect to adapt to any unexpected feedback from the bike. Stay on the balls of your feet so you can make small adjustments with a left or right weight transfer through the ruts. You also have to be physically strong enough to correct the bike if it steps out on you.

The last puzzle piece is testicles the size of casaba melons; gotta have ‘em. When those guys grab a handful of throttle and decide they are making a pass down a hill like that even they are puckered up a bit, I promise you. Things are moving past you so quickly your eyes begin to water, in part because you don’t blink for long periods of time. So much ground goes past you at that speed you don’t dare shut your eyes. They just have faith that all of their preparation will allow them to pull it off—most of the time, it does.

The noble house of Ping,

I thought I could do a sort of dealer’s choice question. You've been a big name in this sport for a long time and have seen behind the scenes as a racer, manager, and media guy. What 'behind the scene' nugget do you think would interest the average fan? Nothing sleezy or gossipy, but what details are there that happen in the average day of a factory rider that the normal Joe wouldn't think about? What outside sponsor deals might some of them have that we wouldn't expect? It's hard to picture anything being unknown in the social age, but still, maybe there's something ordinary and mundane about the factory world that would be interesting to the fans. I realize that was lots of questions, but humor me.

Thanks for all the great content and good job on The Whiskey Throttle Show.

Something that is probably lost on folks is the mental struggle of the game in the pro ranks. Imagine you are one of the best amateur riders in the sport and you’re crushing it, winning titles and smashing, well… you know what, to your heart’s content. You get a factory ride and you’re on top of the world. Big checks start coming in, you have cool gear and the fastest bike you’ve ever ridden. And then you compete in your first pro race and you get your ass handed to you.

The vast majority of these can’t-miss-kids don’t ever win a pro race again. Sure, there are exceptions, but for the most part their winning days slow way down. Imagine how tough it is to continue to tell yourself that you are capable of winning when you literally haven’t won a race since you turned pro. I bumped into Derek Drake and Sean Cantrell at TLD recently and I told them not to get frustrated. Success doesn’t come easily or quickly most of the time and it can be a struggle to stay motivated and confident. Maybe that seems abstract or it isn’t what you were looking for, but it is something that doesn’t get talked about much.

As a rider like yourself who's gotten a "SX-only" contract/deal (2002 125cc SX on KTM), how hard/easy was it for you to get a "SX-only" deal back in '02?  I know that Jeremy McGrath started this trend in 1999 for Chaparral Yamaha (while Steve Lamson and later Tim Ferry did both SX and MX seasons), and privateers through the years have been generally interested in the supercross season only. It seemed like back then, the only way you'd get something like that (along with an interview for finishing fourth or lower) is if your name was Jeremy McGrath (or if you got injured at some point during the supercross season). Now, today, more notable names are on (or have been on) SX-only teams/contracts. I can think of guys like McGrath, Nathan Ramsey, yourself, Justin Brayton, Kevin Windham, Josh Hansen, and most notably Chad Reed (not to mention the late Tyler Evans). James Stewart is another notable name, but he's the only guy in which a SX-only deal DIDN'T work out.

So, in a nutshell, Ping: How hard/easy was it 10-20 years ago for riders like you, McGrath, and Reed to have a SX-only contract/deal, and how much harder/easier is it to get a SX-only contract/deal today? I know that Chad Reed is a big name, and has been able to get the past four years (2016-today) and having a SX-only team (San Manuel Yamaha) in 2007-2008, and getting a SX-only deal for Team Suzuki in 2009 (until Reed decided to race the MX series). Yet why couldn't Chad get a SX-only deal for his own Discount Tire/TwoTwo Motorsports team for 2015 after he signed Josh Grant? It was his team, so wouldn't that be his call, theoretically speaking?

It was easy for me. I wrote a tongue-in-cheek article about a trip to Europe and it upset the Austrians. I guess they don’t like to hear that their beds are small, their milk is warm, and they breathe cigarette smoke and diesel exhaust like its oxygen. Still, it was probably for the best as I was on my way out.

Kevin Windham, McGrath, and now Justin Brayton have all used a supercross-only schedule to prolong their careers. These deals are tough to come by because teams want riders for an entire season, not just the first half. I am surprised Reedy didn’t run an SX-only operation, especially given the additional cost of outdoor racing. He’s always been the type of guy who wants to be at the races though, so that probably had something to do it. The one reason these rides are becoming more common is there are more teams racing supercross only, like the SmarTop/Bullfrog Spas/MotoConcepts Honda team.

Brayton takes a few weeks off after Vegas and then heads down to Australia to run their supercross series, which is much less grueling than ours. After that he comes home for another short break and then ramps up for the off-season supercross races in Europe and the start of Monster Energy AMA Supercross in the U.S.

Honestly, if you’re looking at it on paper, I would say JB has the best schedule of any of the riders right now. Maybe you’ll see more of it in the future, maybe not. I think most of your younger riders will continue to grind away on the full season here while the older guys look for something like Justin has going on.