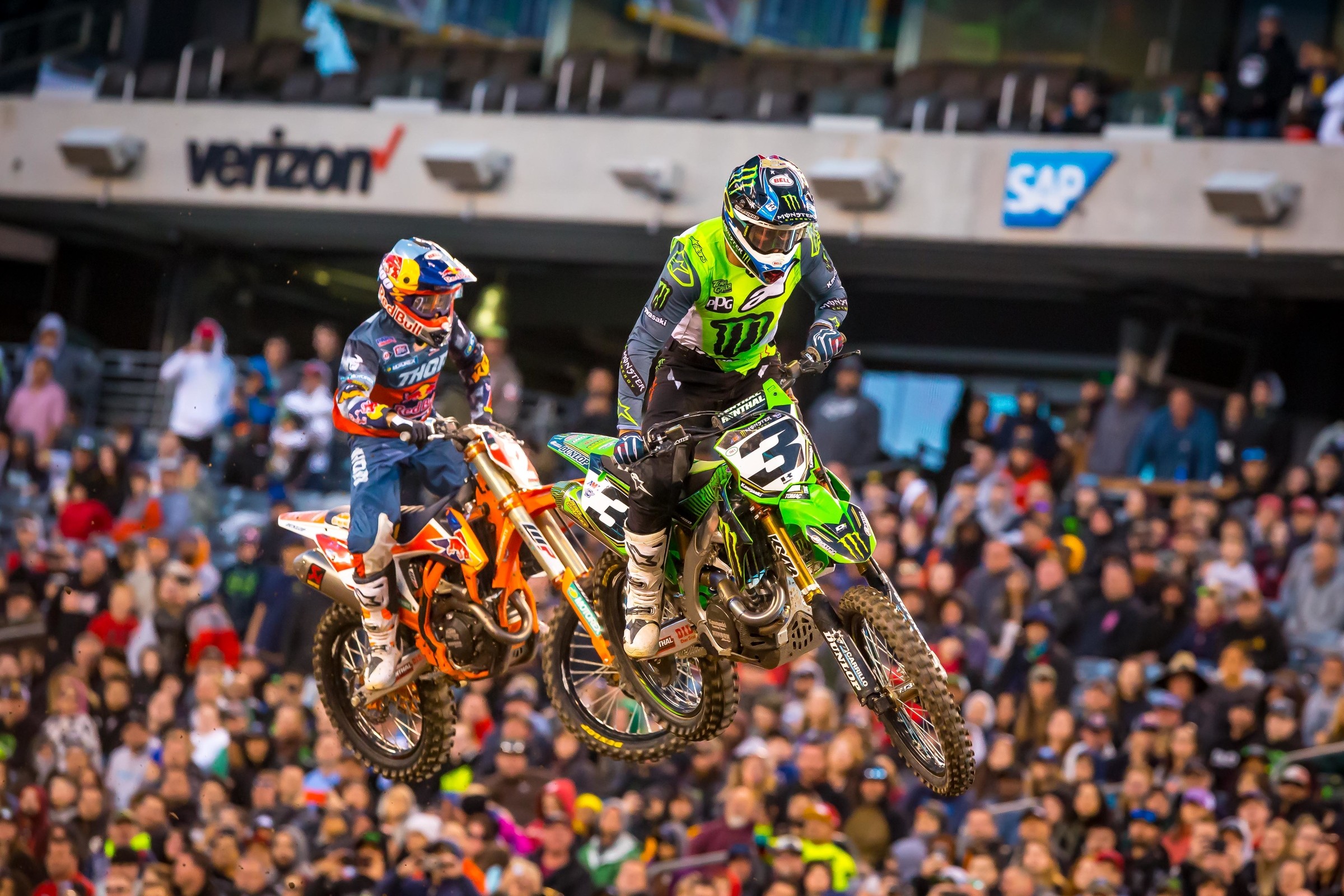 The dirt in East Rutherford looked tricky and forced mistakes. Why?

With heavy rains on Friday, the track crew was again under pressure to protect the dirt. They got it covered with time to spare, ensuring a dry race track, but avoiding soft sections and ruts is next to impossible. The result is a very soft base from the moisture accumulation (pooling in the low spots) and very hard, dry jumps. Checking out things during track walk on Saturday morning, I saw both ends of the spectrum from mud to dust. It made for tricky conditions during the races. There were a few hard spots that had been completely protected from the rain but many more sections that deteriorated each and every lap.

How does Eli Tomac crash in the same exact spot twice?

He, like many others, had resorted to tripling through the nasty whoops. I don’t think this is a strength of Eli’s and in fact, he rarely will resort to this technique. That avoidance of jumping whoops means he doesn’t get much practice at it. These whoops, in particular, were more difficult than normal. The transitions in between whoops were jagged and unsettling. There wasn’t a smooth take-off to triple from and that created unpredictability. Eli was jumping from the main middle line but was having a hard time staying in the middle of the line, too. He was often angling one direction or the other but kept it going most of the time. The two obvious times he didn’t were nearly identical. He got off-kilter and veered to the right both times. In the heat of battle, he wasn’t necessarily focused on being precise. He was trying to jump through as fast as possible. I think his urgency and also his preference for blitzing whoops contributed to his two crashes. Jumping whoops is very rarely the optimal line so many guys don’t practice it often, if ever. That fact may have been the difference between winning and losing last night.

Cooper Webb won the race but may have been the third or fourth fastest guy. How is he doing this?

All season long, Webb has found a way to capitalize on everyone else’s miscues. Every opportunity has been maximized, too. When the win is available, he takes it. When Musquin, Tomac, and Roczen make a mistake, Webb has somehow put himself in the perfect spot time after time. He hasn’t been the fastest guy on multiple occasions and yet somehow he’s left with the upper hand. Smart decision making, great starts, and race management have been the keys to this series. On his off nights, he made sure he started at the front to minimize the damage. On his better nights, he charged through the pack with ferocious aggression. I was vocal about Webb facing a challenge down the stretch but he never faltered. His relentless pressure for his competition to ride mistake free is what I will remember about this championship. He didn’t have to win every week and he knew it. He made sure that he put himself into every battle all season long and put a strangle hold on the lead. For anyone to catch Webb, they would have needed a perfect home stretch. Marvin Musquin’s penalty in Seattle and crash in Nashville, Tomac’s strange rides in the middle of the series and crashes on Saturday, those are too much to overcome against Webb's onslaught of consistency. It’s been an impressive turnaround and it might be just the beginning.

What happened with Austin Forkner in the main event?

We all knew this was going to be a tough ask for Austin Forkner. His knee injury is as bad as we feared. I give him a lot of credit for suiting up and giving it a real shot. The toughest part of this scenario wasn't just the injury, it's that missing the Nashville main event evaporated his big points lead. He went from 26 points ahead of Chase Sexton to only three heading into East Rutherford’s main event. That forced his hand on what kind of race he could execute. With a bigger lead, he could have let Sexton by and just managed the main event. His great start in the main event would have allowed for a top 5-8 finish, even riding at 80-90 percent. That would have left him with a double-digit points lead going into Vegas.

Unfortunately, none of that was reality and he needed to battle Sexton or at minimum, ride at a podium level to keep the points close. To do that, he really couldn’t hold anything back. He had to push the pace and take a few chances. He had already seen that his conservative approach in the heat race wasn’t going to work, losing 2-3 seconds a lap on the leaders. So, he went for it. With a top three start, everyone was holding their breath to see if this was going to work. For a lap or two, it did! He was managing Sexton behind him (after blasting him out of the way), and pressuring Davalos for the lead. Then came one small mistake and everything unraveled instantly. He overjumped the single-single (originally a huge double), putting a ton of forward force on his knee. That forward force is very difficult for an ACL injury as there is no stability in the knee. It really feels like your knee cap might come forward through your skin. It has a tendency to dislocate momentarily (Ricky Carmichael made mention of this on the broadcast) and with an injury this fresh, there is a lot of pain associated.

Going into the event, I really felt that Forkner’s success or failure would depend on his knee “staying in.” If he could stabilize it enough, he could deal with the pain. The dislocation factor is the biggest variable and as we saw, likely drew an end to his 2019 season. I dealt with this exact same injury in 2004 and 2011, racing through it both times. It was not fun and not easy, dislocating each knee multiple times along the way. Fortunately (and I guess unfortunately also), I wasn’t in a championship battle and I could let it unfold without any real pressure. Forkner didn’t have that luxury and had to maintain a winning level. Riding around inside the top ten would have been doable. Winning simply wasn’t.

Who was the biggest fantasy killer this weekend?

Jace Owen has been absolutely brutal for fantasy players this year. He has been SO fast in qualifying but just CANNOT put a main event together. Starting in Atlanta, it’s been a roller coaster of emotions for everyone. His speed jumped off the page, yet again qualifying at the front in New Jersey. He was a 60 percent pick trend (!!!!!!) on Saturday, which basically signifies that everyone taking the game seriously picked him. Yes, he did qualify and still got double points but he blew what could have been a great points haul. The only upside is with such a high pick trend, it didn’t change much as far as each team’s success. Almost everyone rose and fell together with Owen in New Jersey. Atlanta and Daytona were much more impactful.