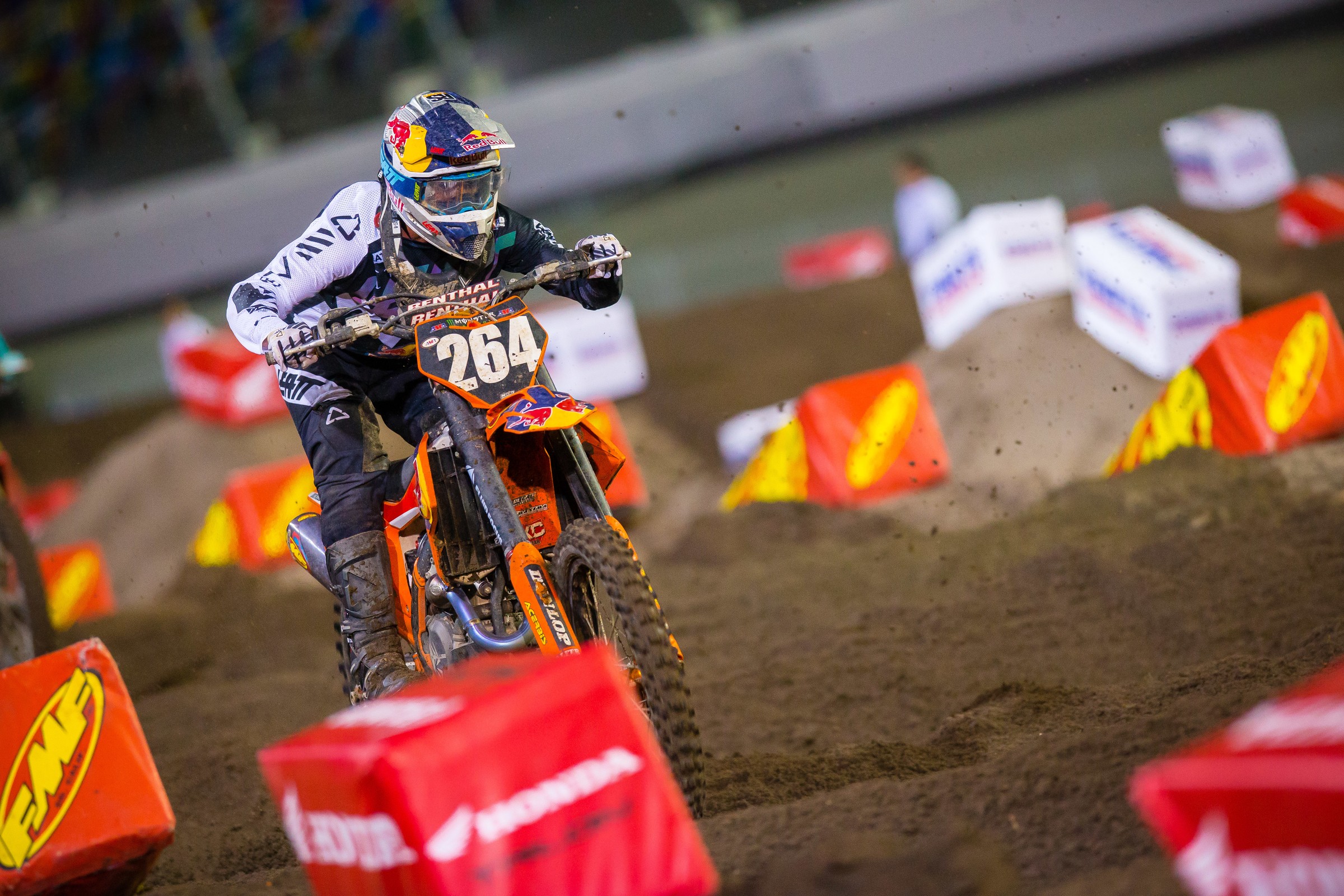 This weekend Monster Energy AMA Supercross will descend on Nissan Stadium in Nashville, Tennessee, for the first time ever. Thanks to the track map we know what the track will look like, but that’s about it. The actual dirt is going to be brand new for the teams and racers and will take some getting used to. Also unknown is how it’ll break down over the course of the day and night. Will it get rutty? Is it rocky? Will it be hard-pack? We’ll just have to wait until Saturday to find out. –Aaron Hansel

By now you know all about the bumping that went on between Red Bull KTM teammates Cooper Webb and Marvin Musquin in Houston that culminated with Webb bouncing Musquin off the track (if you don’t, go here). It’s been written about, bench raced about, and analyzed all week, and at this point the only question left is what might happen if the two find themselves on the track again this weekend. Time and time again we’ve seen Webb’s fiery aggression and emotions take over, and it wouldn’t surprise anyone if it happens once more in Nashville. We’ve also seen Musquin put similar moves on people. Remember when he tried to pay Jason Anderson back in San Diego for parking him the week before in Oakland? Or what about the time he put Eli Tomac in the dirt in Foxborough? Don’t be surprised if these two trade more paint this Saturday night. -Hansel

Eli Tomac vs. Himself

When Eli Tomac is on the gas, there doesn’t seem to be much the competition can do to stop him. Trouble is, at least for Monster Energy Kawasaki, Tomac seems to have trouble sometimes bringing the heat consistently. For example, last week in Houston he got a bad start in the second 450SX main event and was tenth after one lap. You’d expect him to slice and dice his way to the front, but he was inexplicably unable to do so and finished seventh. But in the very next race of the night, he caught and passed Webb to finish second, and logged the second-fastest lap of the race! What can we expect from the mercurial Tomac in Nashville? –Hansel

Chase Sexton and Justin Cooper have been pretty evenly matched this season, and we’ve got the stats to prove it. Although winless, they’ve both been on the podium four times and have very similar average finishing positions. Sexton’s average is 3.167, while Cooper’s average is 3.333. As a result, they’re both tight in the championship too, with second-place Sexton leading Cooper by just two points. They're both consistent too, with neither finishing outside of the top five in 2019. Will it stay tight, or will one of them open it up this weekend? –Hansel

The top three in the 250SX East Region have a sizable gap on the rest of the field, but things couldn’t get much tighter in the battle for fourth. Martin’s got 92 points, Davalos has 89, and Oldenburg has 88. Don’t let the fact that they’re out of the top three fool you either—riders always want to finish as high as possible in the standings, and this situation is no different. To make things more interesting, Monster Energy/Pro Circuit Kawasaki boss Mitch Payton and our own Steve Matthes have a bet regarding Davalos and Martin. If Martin bests Davalos in the championship, Payton has to travel to Las Vegas to be an in-house guest on the Pulp MX Show. If Davalos wins, Matthes will be sweeping floors and emptying trash at Pro Circuit headquarters in Corona, California. -Hansel

This year, Ryan Sipes is partaking in a unique schedule where he will race everything from supercross and motocross, to GNCC, and even American Flat Track. Earlier this year at Daytona, Sipes made his return to supercross and finished 14th in his first SX since the Las Vegas East/West Showdown in 2013. Sipes is back this weekend on a more traditional supercross layout, so it will be interesting to see how he adjusts. Can he score a top 10 in his second race of 2019? -Chase Stallo

Can Anyone Stop Forkner?

Well, they haven’t yet. Prior to the East Region break following Indianapolis, Austin Forkner had won five of six races, with his only loss coming in the East/West Showdown in Atlanta. It’s not just that he’s winning, but he’s dominating. He’s led 112 of 115 laps in East Region-only races and built a massive 26-point lead on Sexton with just three rounds remaining. If Forkner wins again this weekend, he’ll likely clinch his first career title when the East Region returns at East Rutherford on April 27. -Stallo

Houston was not kind to the Monster Energy Yamaha Factory Racing squad. Both Justin Barcia (shoulder) and Josh Grant (neck) missed the third main event on Saturday due to injury. Grant’s return to supercross has not gone as planned, and Barcia has gone 17-17 the last two rounds. We’ll see if the Blue Cru can turn things around this weekend. -Stallo

After winning the first main event of the Triple Crown in Houston, Honda HRC’s Ken Roczen went down in the first turn of the second main event and limped back to his bike before pulling out of the race. He did return for the third main but finished eighth—finishing 10th overall on the night. It was originally thought to be an ankle injury, but the team confirmed that Roczen injured his toe in the crash. Roczen will race this weekend, so we will see how much of an impact his toe injury will have. -Stallo

Bummer about yesterday. We had a good day all day. Started the day off by getting the pole position. I got the holeshot in the first main and put a 10 second gap between me and the field and got the W in that one. In the second main i went down on the start and felt sharp pain in my ankle + my bike was really bent up so i DNF that one. Raced the 3rd main and managed to get an 8th. Thank you everybody for the support?? @honda_powersports_us @redbull @foxracing @canyon @stancesocks @breitling @goartofsport ? @shepherdphotos

Rockstar Energy Husqvarna’s Dean Wilson locked down his first podium since Indy 2018 last weekend and has arguably been the best rider in qualifying over the last few weeks. Meanwhile, Honda HRC’s Cole Seely is heating up, capturing his first top five of the season in Houston. Both riders are returning from an injury plagued 2018 season and are putting in strong performances down the stretch. Will it continue this weekend? -Stallo