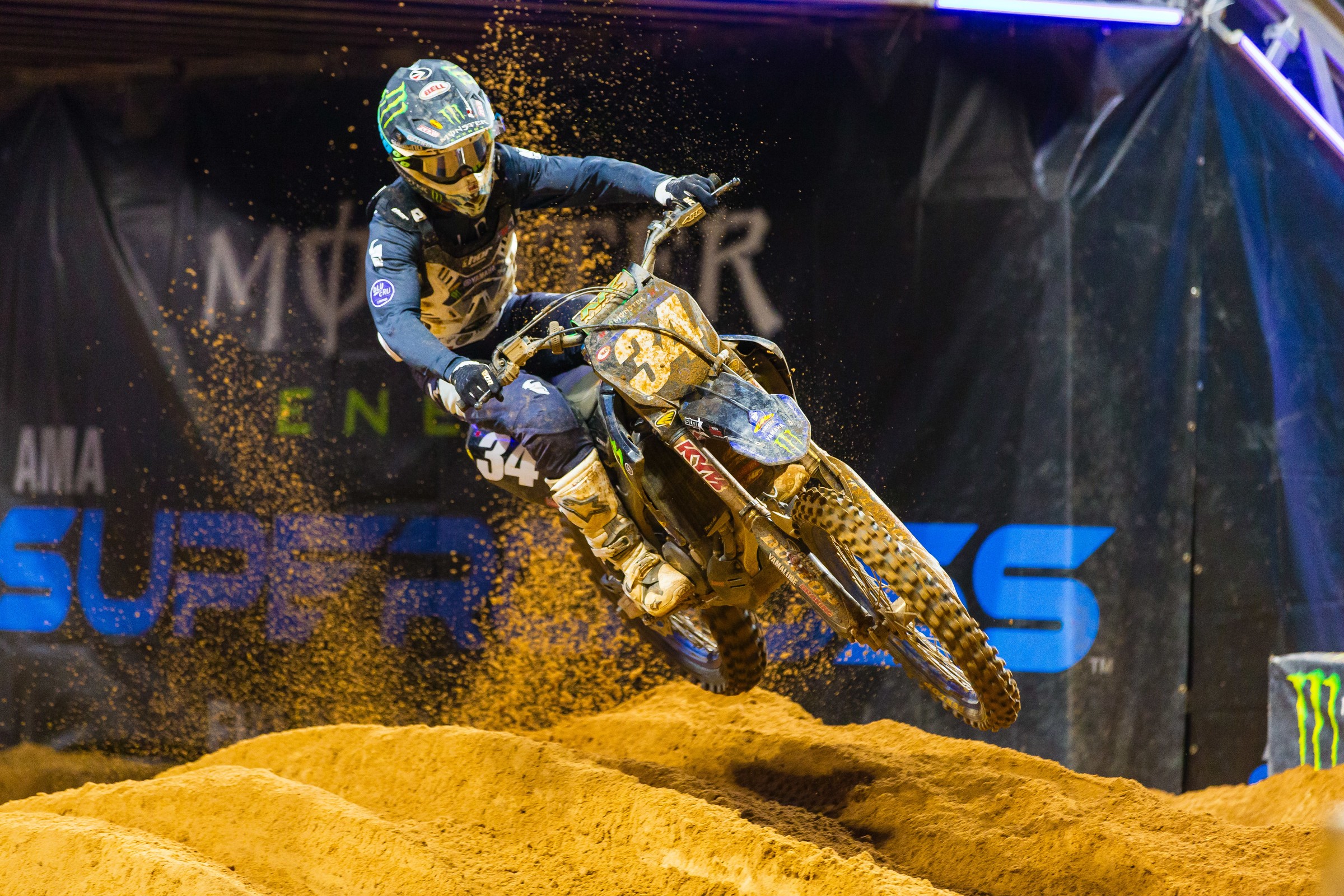 When the 250SX West Region left off after the East/West Showdown in Atlanta, Adam Cianciarulo had just put a victorious exclamation point on what’s turning out to be a spectacular season for him. The Monster Energy/Pro Circuit Kawasaki rider now has some breathing room with a 15-point lead, but behind him things are pretty tight. Dylan Ferrandis (125), Shane McElrath (123), and Colt Nichols (120), occupy second through fourth and are only separated by a mere five points. Barring disaster, it’s unlikely Cianciarulo will give up the red plate this weekend, but it’s anyone’s guess where Ferrandis, McElrath, and Nichols will be following this weekend. –Aaron Hansel

Whether or not the forecast calls for rain, there’s always a threat of it when Monster Energy AMA Supercross heads to Seattle. If you need proof just check out the videos below from last year’s muddy ordeal. We could be in for another mudder too, as rain is expected on Friday and Saturday. If that happens it could provide the shakeup guys like Eli Tomac, Marvin Musquin, and Ken Roczen are hoping for as they try to chase down Cooper Webb, who leads the series by 14 points. Then again, it could always swing the other way too, leaving Webb with a massive lead. We’ll see which way the water flows, if at all, in Seattle. –Hansel

Speaking of inclement weather, some guys seem to excel when things get wet and Justin Barcia is one of them. He won the muddy season opener this year, and the last time he won before that was in Seattle in 2013 after rain had fallen in the afternoon. And even if no rain comes at all, the dirt in Seattle is typically pretty soft and breaks down quickly, which makes for tough and rutty conditions. Can Barcia, who took fifth in Indianapolis after missing two rounds with a concussion, use Seattle’s unique soil to his advantage to get back on the box? –Hansel

We’ve all been waiting for Marvin Musquin to get his first win of the season and it finally happened last week in Indianapolis. Musquin led every lap too, although he did have to deal with some pretty immense pressure at times from Blake Baggett. There’s nothing like winning races to boost one’s confidence, and now that Musquin’s got that first one out of the way we might just see him knock down another one in Seattle. –Hansel

Musquin isn’t the only fast Frenchman who’s been searching for a win this season. Ferrandis, who’s finished second in four of six 250SX West races so far, is the other. He badly needs a W too. With just four races left he trails Cianciarulo by 15 points, which means he needs to average four more points than Cianciarulo at every remaining round if he wants to win the title. We’ll see if Ferrandis can improve the health of his championship quest in the Pacific Northwest. -Hansel

If Eli Tomac continues his recent pattern of wins followed by not so great races, this weekend could result in another 26 points for the Monster Energy Kawasaki rider. In the last seven rounds, Tomac has gone 1-6-12-1-6-1-4, and if he wants to continue to have a shot at the title, he will need a good weekend to dig himself out of the 21-point hole he’s currently in. Tomac won last year in the mud and needs to put together a great ride in Seattle. Will he return to the top of the box this weekend? -Mitch Kendra

The Wheels on the Webb Wagon

The wheels on the Cooper Webb wagon have shown durability throughout 2019, as his five wins are the most in 450SX and he has a 19-point lead. But his last win was in Atlanta. Tomac stole the night in Daytona—although he didn’t make up much ground on Webb in the points column—and his Red Bull KTM teammate Marvin Musquin won in Indianapolis. We’ll find out tomorrow if he can keep the wheels rolling toward his first 450 title and grab his first win since round nine. -Kendra

BB-4 and a Galaxy Not So Far Away

Baggett got his first taste atop a 450SX podium earlier this year in Glendale and has been super close to a second victory in recent weeks. He’s been fast in qualifying, found some fast lines in the main event, and has been on KTM podium sweep three times—could his second win come as soon as this Saturday? -Kendra

Josh Grant will make his 2019 supercross debut tomorrow as a member of Monster Energy Factory Yamaha. Grant, who is filling in for the injured Aaron Plessinger for the remainder of supercross, raced in six races in 2018 for Monster Energy Kawasaki before suffering a fractured tibia in his right leg during Arlington qualifying and was not re-signed by the team following season. Watch for the #33 this weekend as he returns to the Blu Cru. -Kendra

Troy Lee Designs/Red Bull KTM’s Shane McElrath is going into this weekend with the possibility of pointing out of the 250 class. If McElrath, currently third in the 250SX West Region standings with 123 points, finishes 11th place or better it will put him at the 135-point limit in a nine-race season for a third straight year. A good result this weekend could keep Sugar Shane in the championship hunt, but it would also mean he’ll be forced to the 450 class next year. -Kendra