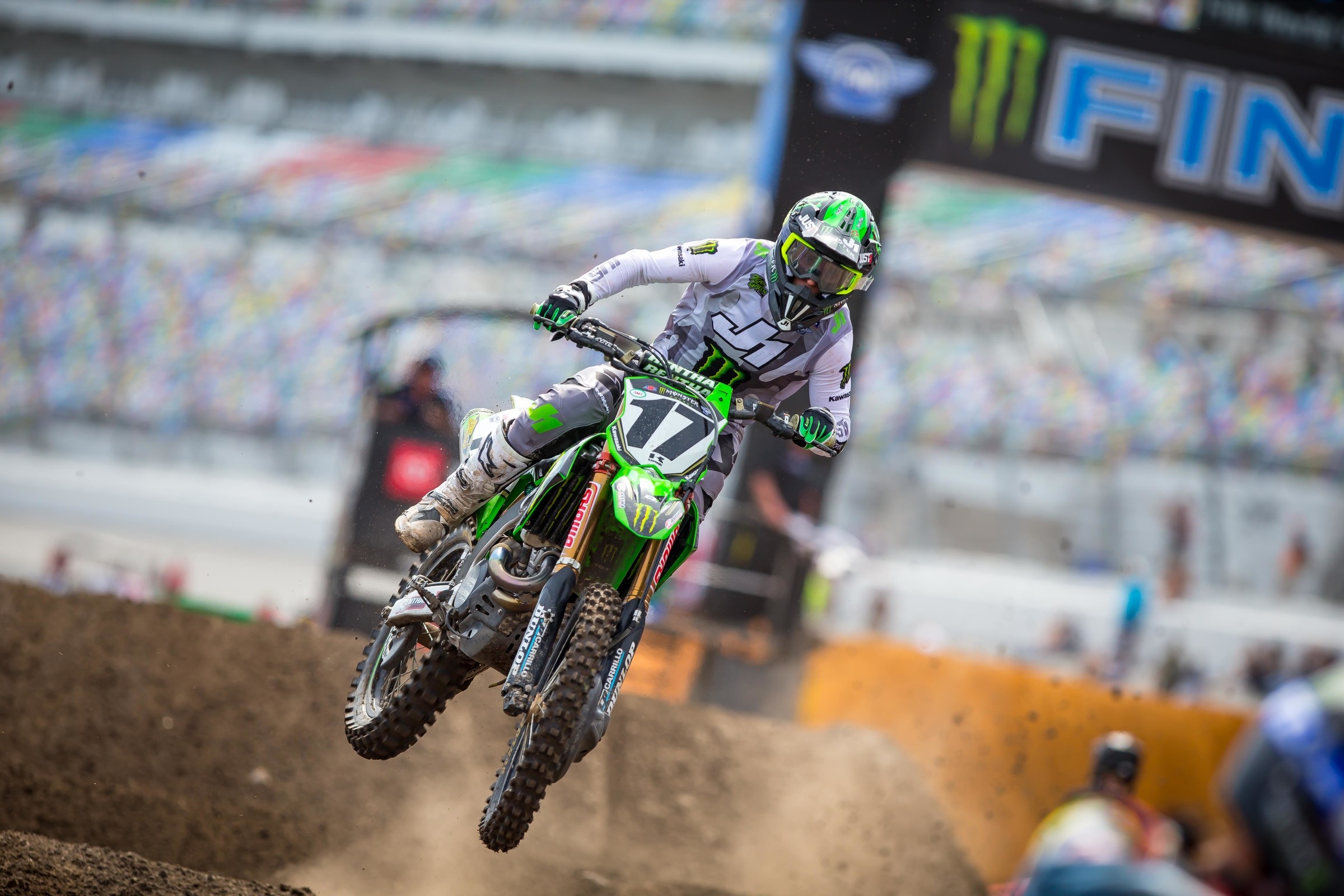 We keep waiting for Justin Hill to have one of his signature breakout rides in which he just smokes everyone with no warning whatsoever. So far that hasn’t happened, although he has shown some absurd speed during qualifying and is, by all accounts, outlandishly fast during the week. The good news for Hill fans is that he logged his best result of the season in Daytona, a seventh. Not quite what anyone expected to be his best result 10 races in, but if it’s a sign the 450SX rookie is putting things together we could see some fireworks this Saturday night. -AaronHansel

For a while the points were extremely tight up front in the 450SX Class. Cooper Webb’s done a pretty good job at changing that, but behind him it’s still crazy close. In fact, Eli Tomac and Marvin Musquin are both tied for second at 203 points each. It’s tough to tell who’s got the upper hand coming into Indianapolis too—Tomac’s got three wins and is coming off a win in Daytona, but Musquin, while winless, has been more consistent this season. To make things even more interesting, Ken Roczen is only two points back of Tomac and Musquin, and could easily leapfrog them both to take over second. Which one of these three will own second place following Indianapolis? -Hansel

Joey Savatgy’s been good this season, and as far as results on paper are concerned, he’s been much better in the second half than the first. In the initial five races he earned just 40 points with an average finishing position of 10.4. In the next five races he earned 84 points with an average finish of 6.2. According to the numbers he’s definitely rolling, which makes sense—a rookie is more likely to do better with some experience under his belt. We'll see if he keeps going in Indianapolis. –Hansel

The tie for second between Tomac and Musquin isn’t the only one in Monster Energy Supercross. Right now Chase Sexton and Justin Cooper are locked in second at 102 points each, and they’ve even matched results perfectly. Both have one second, two thirds, one fourth, and one fifth. It doesn’t get more equal than that! But unless they both fail to qualify in Indianapolis, which is about as likely as Justin Barcia and Tyler Bowers playing golf together during the week, one of them is going to creep ahead in the standings this weekend. -Hansel

Perfection in the East

Austin Forkner has been pretty close to perfect this hear. Although he hasn't won all the races he's entered, he has won everything in the 250SX East Region. And even in the race he didn't win, a 250SX East/West Showdown, he still finished ahead of all the other riders in the East. Now, with the series over half done and heading west after Indianapolis, this weekend marks the last chance the competition will have for a few weeks to knock him off the top of the box. –Hansel

Bam Bam Is Back

Justin Barcia has missed the last two rounds due to a concussion sustained in a practice crash. He was cleared to race this weekend and it comes at a perfect time for Monster Energy Yamaha, who lost Aaron Plessinger last weekend to a broken heel. "I haven’t been able to ride too much, but I feel like I’ll be competitive no matter what,” Barcia said in a statement. “It’s definitely a bummer that my teammate won’t be around. I’m ready to get back to the races and hold the fort down while AP’s healing up.” Will it take Barcia a few races to get back up to speed? We’ll find out more tomorrow. -Chase Stallo

Troy Lee Designs/Red Bull KTM will finally get Mitchell Falk back this weekend. The rookie has been out since a crash prior to Arlington and with Jordon Smith sidelined with a wrist injury, he will be the lone TLD rider this weekend. A rookie, Falk finished 17th in his only SX race this year in Minneapolis and is still very much on a learning curve when it comes to SX. Let’s see how he does in his second career start this weekend. -Stallo

Osborne Back on Track

Pre-season, Zach Osborne “flying at the test track” rumors were circulating hot and heavy. A shoulder injury prior to the season opener put a damper on his season and since he returned in Minneapolis, he hadn’t been able to put a consistent main event together. That changed in Daytona, as Osborne looked great and finished a season-high sixth. Let’s see if he can build off that this weekend. -Stallo

It’s hard to get riders to agree on anything. Yet, universally, complaints trickle out when sand is used in a 180-degree corner. When Justin Brayton is airing his grievances on Instagram, you know it is disliked. Brayton never complains! It will be interesting to see how it plays out, it definitely caused problems last time a sand turn was used in Atlanta. -Stallo

We’ve heard the Indy track design looks basic on paper, but keep in mind the dirt in Lucas Oil Stadium sometimes forms the deepest ruts of the season, and that leads to chaos as the track breaks down. The riders have agreed that lime can be used on the tracks again, because drier soil and fewer ruts means a safer track, but you can rest assured the drying agent won’t be used in an extreme fashion. What it really comes down to is how wet or frozen was the dirt before it came into the building. Take a gander at the 2016 mega battle between Ryan Dungey and Ken Roczen in Indy—it was an exchange of big mistakes. Could end up being a wild one on Saturday night. –Jason Weigandt